9 Things Prepare You For ONCE UPON A TIME IN HOLLYWOOD

We’re just a week away from Quentin Tarantino’s ninth studio film, Once Upon a Time in Hollywood, a fable about Tinseltown in the dangerous, free-loving 1969. It was the year we landed on the moon, the year of Woodstock, and the year of the Manson murders, America’s most infamous true-crime horror story. The murders claimed Hollywood star Sharon Tate–the pregnant wife of Roman Polanski–her friends, and other unsuspecting, innocent lives. It was a strange crime, steeped in rock lore and free love, and orchestrated by Charles Manson’s dangerous cult, the Family; so of its era that it permanently stained the decade with its bloody fingerprints.

We have no idea how closely the famously revisionist Tarantino will adhere to the facts–the “once upon a time” of the title implies that we’re in for something unexpected–but there’s no denying from the trailers and marketing that Once Upon a Time in Hollywood will be ripe with details from 1969 and follow some of Manson’s lore no matter how it ends up subverting them. With that in mind, here’s a primer to catch you up to speed with the Manson Family, Sharon Tate, and 1969 Hollywood ahead of the film’s release. 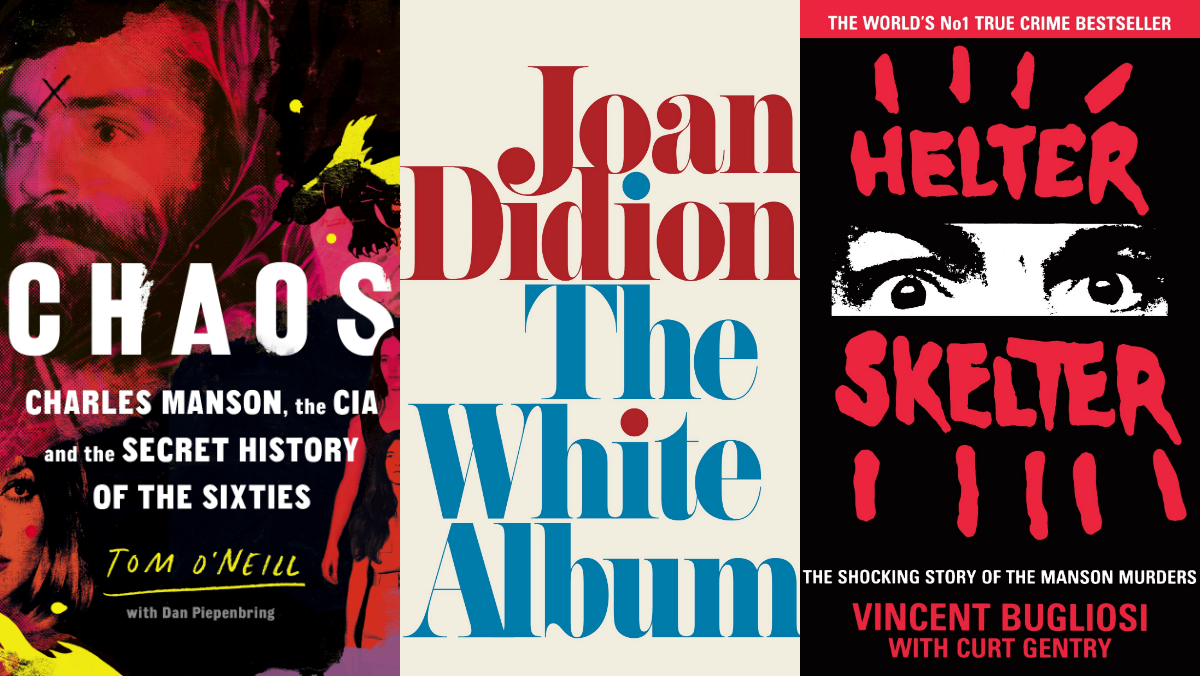 Perhaps the most famous true crime book of all time, Vincent Bugliosi’s Helter Skelter remains the most exhaustive and accurate account of the Manson murders and those trapped in its intricate web of death and deception. As an attorney in the Los Angeles District Attorney’s Office, Bugliosi prosecuted Manson the other defendants in the Tate-LaBianca trial, and the insights gathered–followed by many years of information-gathering–make this the No. 1 source for all things Manson murders and 1969 Hollywood.

Tate’s sister, Debra, has spent her entire adult life preserving her sister’s memory, and bringing justice to the killers. She petitions the Family’s parol hearings and has thus far successfully prevented their release. She also poured her love into this coffee table book, packed with exclusive photos of Sharon that document her life–not as a murder victim, but as a human; a daughter, a sister, a wife, a should-be mother. Recollection is also full of quotes from people who knew Sharon in real life, including her co-stars Patty Duke and Dean Martin, her husband Roman Polanski, and her family.

The White Album by Joan Didion

Didion was living in Hollywood when the Benedict Canyon murders happened, and recounted the peculiar tenor in the air as the ’60s boiled to a stew, ready for strange happenings. The titular essay of this 1979 collection recalls that night, and the days that followed, including Didion’s own close involvement with the case; she was at the murder trial, and even picked out the dress key witness Linda Kasabian wore to her testimony. The most famous passage comes when she recounts the night of the murders, as news of Tate’s death started making the rounds:

The early reports were garbled and contradictory. One caller would say hoods, the next would say chains. There were twenty dead, no, twelve, ten, eighteen. Black masses were imagined, and bad trips blamed. I remember all of the day’s misinformation very clearly, and I also remember this, and I wish I did not: I remember that no one was surprised.

Chaos: Charles Manson, The CIA, and The Secret History of the Sixties by Tom O’Neill

If Helter Skelter whets your whistle, then O’Neill’s blistering account of the conspiracy to cover up the flaws in the Manson prosecution is definitely your cup of tea. O’Neill, a journalist, was tasked with writing a story about the case 20 years ago, and in doing so, uncovered a web of coverups, legal misconduct, and involved intelligence agents. Buglosi’s book might be the definitive take on the material, but Chaos gets into the nitty gritty aspects of the case, and posits even deeper moral questions about the events around the murders on Cielo Drive. 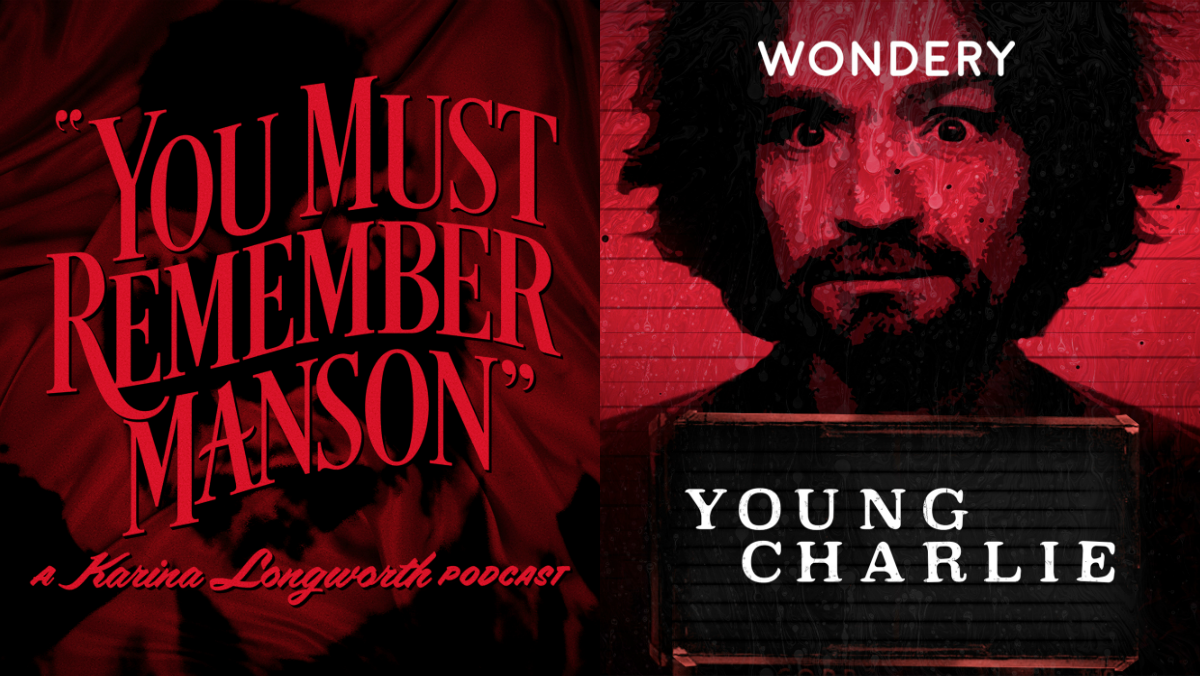 If Helter Skelter is the No. 1 book resource on the Manson murders, Karina Longworth’s stellar Hollywood podcast You Must Remember This is the perfect audio source. In fact, we’d go as far to say that Once Upon a Time in Hollywood is somewhat indebted to Longworth, who revived interest in the case with this 12-episode podcast series about Manson’s extensive ties to Tinseltown, and all of the minor players who dipped in and out of his story and the mess he created–from Steve McQueen to Doris Day and beyond. Longworth makes the material digestible, revelatory, and highly entertaining, revealing layers about how far this crime bleeds into the belly of Hollywood.

While You Must Remember This focuses on the crime at large and its network of Hollywood players and influences, Wondery’s Young Charlie shines a light on the man himself, tracing his path from small-town criminal to infamous cult leader. It’s a brief 6-episode series, but host Larry Brand and actor Stephen Lang make this unique story palatable, without glorifying the monster at the center of the carnage. 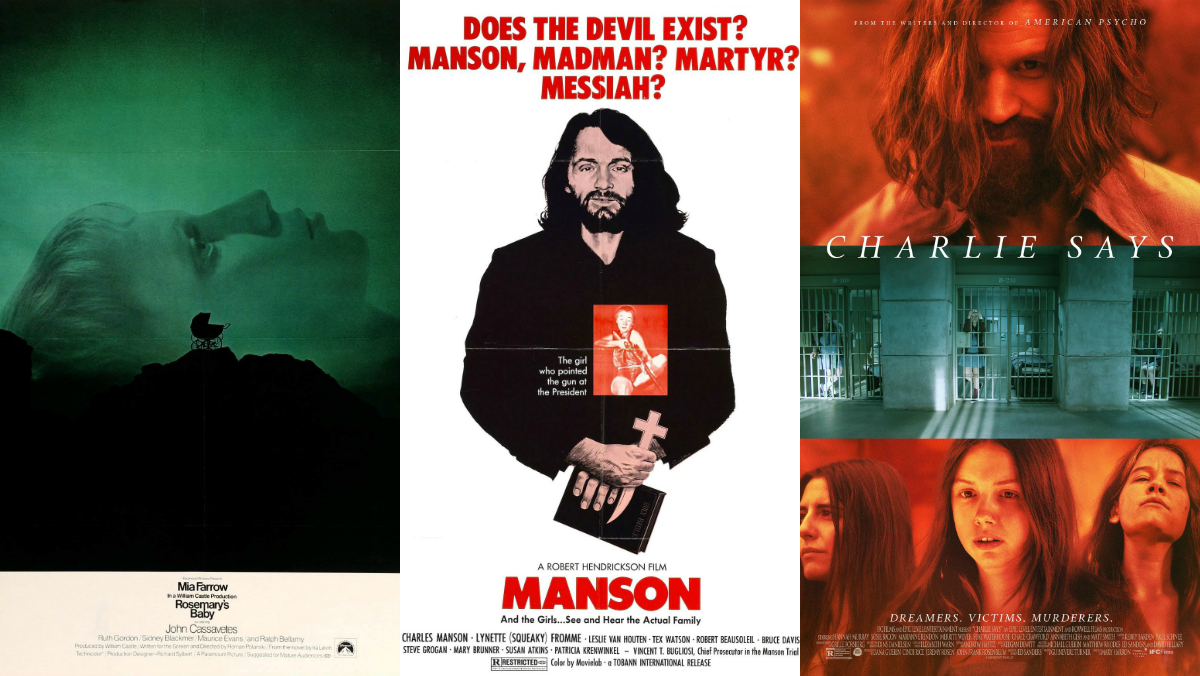 If there’s one film from the time that shares a dangerous amount of DNA with the real-world crimes, it’s Rosemary’s Baby, the Mia Farrow-starring film based on the novel by Ira Levin about a young woman impregnated by the devil. The film was directed by Roman Polanski, his last before his wife and unborn son were murdered. The film’s subject matter–with dabbles in satanism and the occult–made Polanski a suspect in the crimes that would shortly follow its release, and led to many conspiracy theories about Sharon’s murder. They were all nonsense, of course, but it’s impossible to watch the film without a sense of foreboding–about the story itself and the real-world horror that would soon follow it into infamy. A sense Once Upon a Time in Hollywood will share.

Rent it here on Amazon or watch with a Starz subscription.

We’ve seen from the trailers that Once Upon a Time in Hollywood will spend time on Spahn Ranch, the movie set turned commune where the Manson Family took up residence in the 1960s. Robert Hendrickson and Laurence Merrick’s 1973 documentary delves into the Family, using real footage of their days on the ranch and their other haunts, like their Death Valley hideout. The doc spends a lot of time with Lynette “Squeaky” Fromme, a notorious Family member who later attempted to assassinate President Gerald Ford. Fromme is played by Dakota Fanning in Tarantino’s film.

Another film that gets into the psychology of the Manson cult is Mary Harron’s 2018 film, Charlie Says, which follows three of the murderous Family members–Leslie Van Houten (Hannah Murray), Patricia Krenwinkel (Sosie Bacon), and Susan Atkins (Marianne Rendón)–as they serve out their prison sentences in the aftermath of the Tate-LaBianca murders. We don’t know to what degree the crime will play out in Tarantino’s film, but these are three names you’ll want to familiarize yourself with either way, and Harron’s film does an impressive job of showing the intoxicating lure of cult life and the menacing impact of Manson, played by a terrific Matt Smith.

Rent it here on Amazon.

TAGGED: Charles Manson, Once Upon a Time in Hollywood, Quentin Tarantino