She was “delicious and beguiling,” according to Truman Capote. A woman who could “stop traffic with her beauty,” in the words of Warren Beatty. Photographer Bert Stern called her “the most beautiful woman I ever met”. But Sharon Tate was more than her body or face, transfixing and uniquely beautiful as they were; her close friends, like actress Mia Farrow, also spoke of her grace and her profound goodness. “There was a capacity for delight,” Farrow said of Tate. “There was a kindness at the core. She somehow made friends feel necessary and they loved her.”

Though immortalized for her brutal death at the hands of the Manson family, Sharon Tate was a rising star in her own right–with an intoxicating warmth and eyes that draw you right into her soul. The almost mystical energy she exuded makes the tragedy of her death more surreal and devastating, and lends an almost eerie quality to the work she left behind. But that work is as worthy of celebration as her life.

In honor of Margot Robbie’s turn as Tate in Quentin Tarantino‘s upcoming film, Once Upon a Time in Hollywood, here is a look back at her ascent as an actress and the roles that put her talent, beauty, and grace on full display.

Tate spent her teenage years in Italy–where her father, a United States Army Officer, was stationed–attending school, but also modeling and working as a film extra on the sets of motion pictures like Hemingway’s Adventures of a Young Man and Barabbas. She caught the attention of actor Richard Beymer (who had just played Tony in West Side Story and would later play Ben Horne on Twin Peaks), whom she dated for a time. Beymer encouraged her to pursue a career in acting, which she did–later actor Jack Palance also persuaded her, getting her a screen test in Rome. After the Tate family returned to the United States in 1962, Tate contacted Beymer’s agent, Harold Gefsky, who was impressed with her beauty and talent. According to Tate’s sister, Debra, Gefsky and producer Martin Ransohoff felt strongly that Sharon’s talents belonged in film, but knew they had to “train” her in television first. So they put her into a number of small roles on shows like Mister Ed and Petticoat Junction, and–most memorably–The Beverly Hillbillies.

Tate played secretary Janet Trego in 15 episodes of the series, and wooed audiences with her silly charm. The bit part was a breakthrough for the actress, even though she was frustrated by the dowdy black wig she had to wear, a kind of disguise. “Mr. Ransohoff didn’t want the audience to see me till I was ready,” Tate told Playboy in 1967. 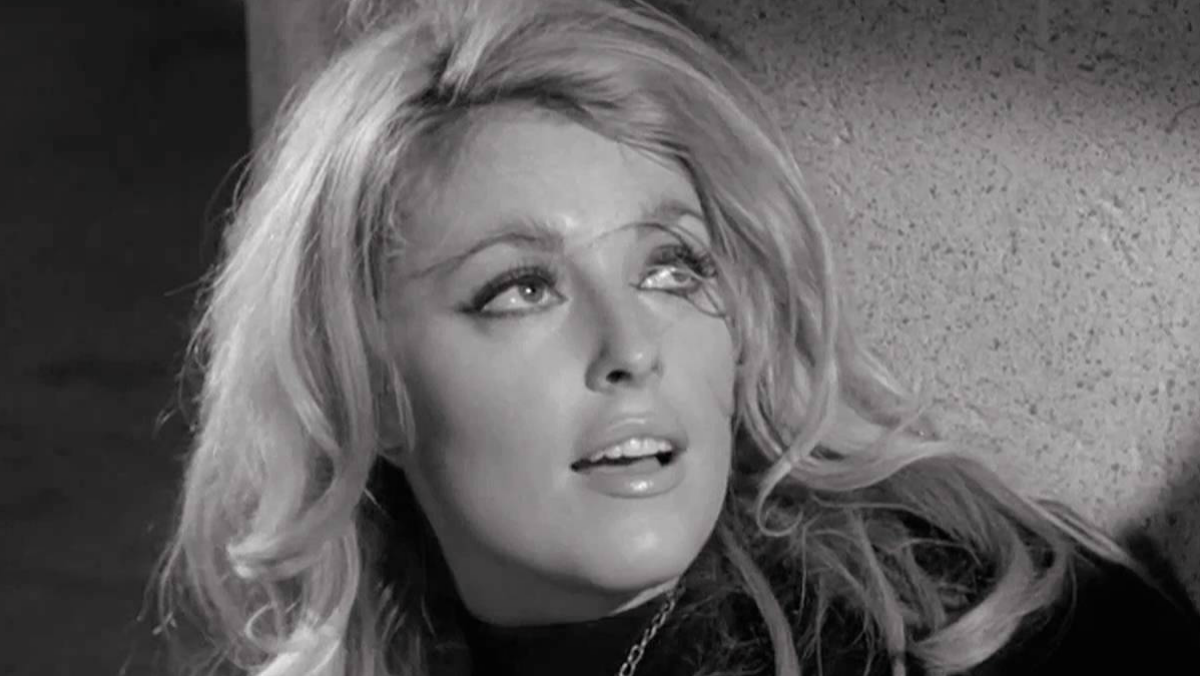 Tate’s big film moment came in 1965, when she starred in J. Lee Thompson’s Eye of the Devil as the witch Odile de Caray. The movie filmed in both England and France, and Tate starred opposite legends like David Niven and Deborah Kerr. It’s a glamorous role for Tate, one where her ethereal qualities are given a true spotlight. It also made her a desirable star, finally ready to take on Hollywood.

“She had that thing you really really explain; star projection.” – J. Lee Thompson

Next came what would become perhaps the most important role of Tate’s life: As Sarah Shagal in Roman Polanski’s horror comedy Fearless Vampire Killers (known as Dance of the Vampires in the U.K.). The film not only made Tate a star with international appeal, but it also introduced her to Polanski, whom she would later fatefully marry.

In the film, Polanski plays a vampire hunter and Tate an innkeeper’s daughter who becomes the object of his affection. When she is abducted by a local Transylvanian vampire and taken to his mysterious castle, Polanski’s Alfred attempts to rescue her–but his actions have inadvertent consequences.

Her next big role was in Alexander Mackendrick’s sex comedy Don’t Make Waves, where she played opposite Tony Curtis. The film hasn’t exactly aged well; it follows the much older Curtis pursuing Tate’s character, Malibu, in ways that border on creepy. Tate’s body is also served up like an appetizer–skin bronzed, hair golden, the camera honing in on her with a glowing filter. She glows in the part, but the camera ogles her, as do the male characters.

That said, Don’t Make Waves remains an iconic entry in Tate’s filmography if only for the iconography. Surely you’ve seen the images of Tate perched against a longboard on the Malibu beach. Indeed, bikinis would become synonymous with Tate’s image because of the film. 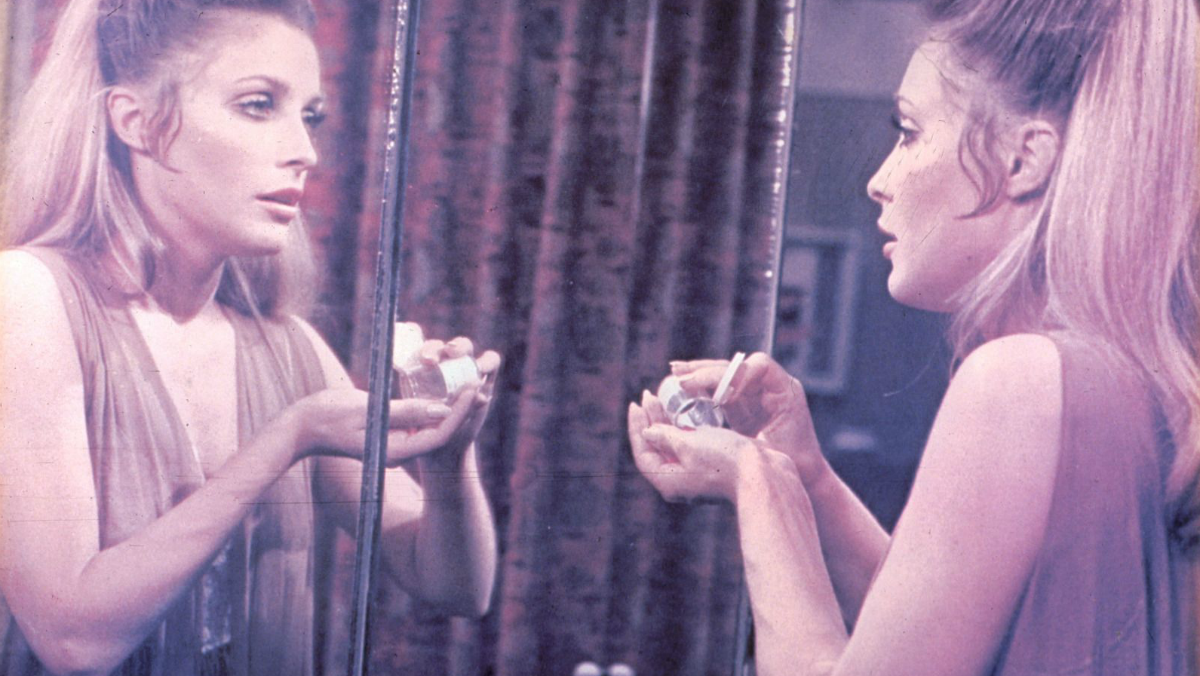 Fearless Vampire Killers and Don’t Make Waves made Tate a hot commodity celebrity–thanks as much to the personal aspect than the professional. Her relationship with Polanski was a high-glamour Hollywood love story, and provided endless tabloid fodder. As her star profile rose, she finally became an in-demand actress, which led to her role in Valley of the Dolls, based on the mega-bestseller book by Jacqueline Smith.

“Being in Sharon’s presence was being enveloped in grace.” – Patty Duke

Tate stars opposite Patty Duke, Barbara Parkins, and Susan Hayward in the film. She plays Jennifer North, an aspiring actress whose body is more glamorized than her talent. The film received wildly negative reviews, yet still snagged Tate a Golden Globe nomination for Most Promising Newcomer. It went on to become a camp classic with an enormous following, and was later released as a Criterion Collection title.

Sharon Tate married Roman Polanski in January, 1968, which once again shot her name into the stratosphere. All eyes were on her next role, which was in Phil Karlson’s spy comedy The Wrecking Crew, where she starred opposite Dean Martin and Tina Louise in the fourth and final film in the Matt Helm series.. Tate’s Kung Fu trainer was none other than Bruce Lee. The film’s production and release will feature in Once Upon a Time in Hollywood–in the trailers, we see Robbie’s Tate watching the film in theaters, reacting joyously as the crowd laughs and posing with the poster.

Tate plays a secret agent in the film, which opened to mixed reviews but was a box office hit. Tate was singled out for her comedic work.

Tate’s final role was in the Nicolas Gessner and Luciano Lucignani-directed film 12+1, also known as The Thirteen Chairs. It’s about a man (played by Vittorio Gassman) who inherits a set of chairs which he sells, only to discover that inside was a fortune in jewels. Tate plays the antiques dealer who helps him track the chairs down, and hi-jinks ensue.

Tate admitted to those close to her that she chose the film because she got to work opposite Orson Welles, who plays a character the pair meet in their search for the chairs. Though an English-speaking film, it only came out in Italy and France. Its Italian premiere was on October 7, 1969–two months after Tate’s murder in her Benedict Canyon home; she was 8-months pregnant with hers and Polanski’s son.

It’s a tragic end for such a lovely, promising talent, but Tate’s aura remains forever preserved in these roles; a glossary we can flip through to remember her timelessness, and who she was as a living person.

*All quotes in this article are taken from Sharon Tate: Recollection (2014) written by Debra Tate, Sharon’s sister.

TAGGED: Once Upon a Time in Hollywood, Quentin Tarantino, Sharon Tate