OFF THE RAILS is a Zany Game of Goblin Minecarts - Nerdist

OFF THE RAILS is a Zany Game of Goblin Minecarts

Off the Rails by Rotten Games is cute. We have whirring mine carts, quirky goblins, and a wonderful visual presentation. Don’t let any of this fool you, because it also has long and pointy teeth.

This is best described as combining elements of Tsuro and The Downfall of Pompeii. That’s to say it melds route building with a final act of destruction. The overall vibe is light-weight as this slots comfortably into a family game night. There are meaningful decisions and this is appealing to a hobbyist, but it’s also approachable and well, cute. 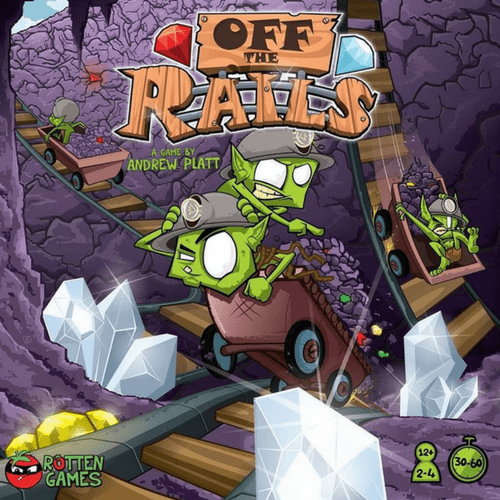 The idea here is that a massive store of gems was discovered underground. In the greenskins’ equivalent of the gold rush, swarms of these buggers descended below the surface to claim the bounty.

In order to collect the sweet plastic gems, you will need to lay track. You will spend your limited actions by placing straights or bends on the open board, developing paths for both you and your opponents to traverse. As the foundation gets more complex and your rail is perhaps cut off or askew, you will need to upgrade the existing track pieces to T-junctions and four-way cross sections.

By literally building the board from nothing there’s a nice thematic implementation of creativity. A quiet mine begins chirping with excitement as iron and wood form the skeletal bones of the approaching mad grab. It’s colorful and strikes a nice balance between humor and strategy.

After laying track your little plastic gobbo-buckets move. They have a speed value set by a die nestled in their belly — this dictates how many spaces they push forward. You can throttle this up and down during your turn for maximize velocity. Of course, if you neglected the little git’s road they will fly off the end of a track section and derail. Don’t do that.

You’re ideally laying just enough rail sections for your two carts to move fully. As you guide them towards the randomized gem deposits you’ll need to make strategic decisions on which color and point values to acquire. You hope to avoid the black rocks littering the ground as those must be retrieved first and will gum up the works.

While this is a pretty light game of construction and movement, it’s one that rewards forward thinking. It’s paramount you keep an eye on the others flying about as you don’t want to get rammed. If a player is smashed into they will drop some of their payload on the tracks and spin around to face the opposite way. You can’t die, of course, but this can seriously wreck your plans and cause you to sacrifice scoring potential.

Eventually, you will make it out one of the exit points on the map, careening at top speed and narrowly dodging several mine-cart assassins nipping at your heels. After hiding the load behind your screen, you then return to the gladiatorial mine and claw your way back for more preciouses. 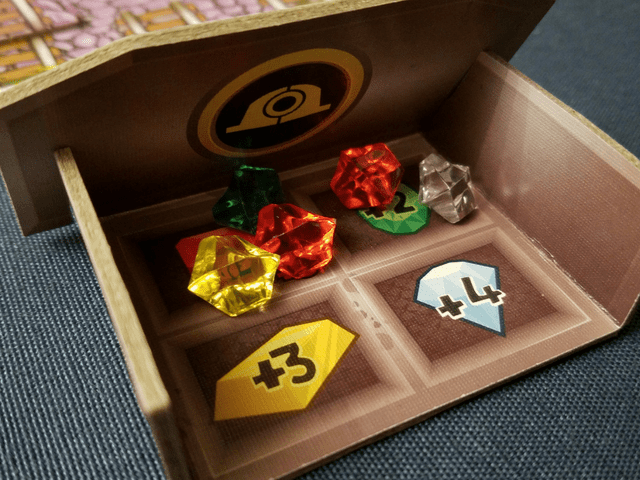 Off the Rails is best when it’s most absurd. The game dials in it somewhat to maintain its family appeal and it never reaches Wiz-War levels of ludicrous. It does, however, hammer that chaotic nature home in the final phase of the game.

When the mine’s been overworked, it tip-toeing on the edge of collapse. Spaces will be wrecked and rail destroyed. Carts may even be toppled and permanently removed. Don’t fret for the game is about to end.

The gluttonous act of stripping the mine literally causes the board to come crashing down. Part of me wonders if this is an obvious allusion to human gluttony and greed, but we have no time to ruminate on such topics as my little hard-hat goblin dude is about to eat it. In this final symphony of destruction, you must grab what you can and fly off the board before it’s too late.

Livening things up are optional goals that are highly recommended. They provide nuance and force more substantial tactical decisions during play. Instead of simply going for the most points, you may instead opt to grab a cart full of lower scoring rubies simply to fulfill the objective and garner some bonus VP. Since each goal is only accomplishable by a single person, they increase the tempo and place a touch of pressure on your back. 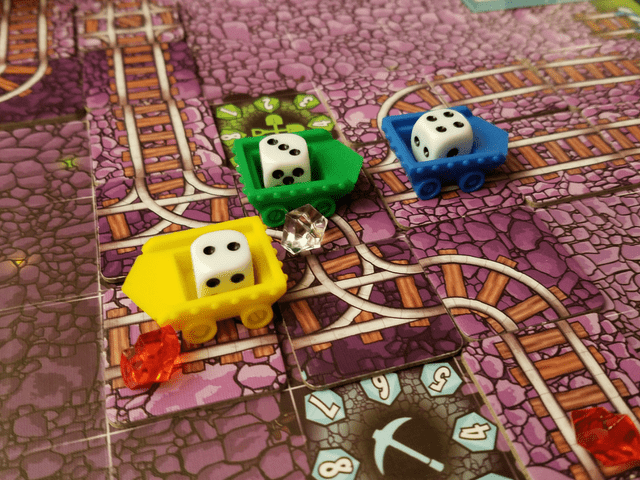 Off the Rails is a wonderful family game that will appeal to the most hardcore of us as well. It’s a 40-minute ride of creation and destruction with a bit of aggression. Little Johnny may be crying that you rammed his goblins and caused him to drop his diamonds, but he’ll get over it. Next turn he’ll be smiling again as he lays some track and scoops up a handful of plastic wealth.

Despite this, I must admit that there are times I wish the game was just a tad more mean and dramatic. This could undermine the intended audience, but it would be nice if carts faced derailment more often. There are small opportunities to mess with an opponent’s laid track, but they can often negate your actions by simply upgrading that curve you threw down to a cross-section. Likely, this is best left for expansion fodder so those desiring a less friendly tone could have their druthers.

Overall though, I find that a minor quibble. Off the Rails comes through on its promise of a route-building rollercoaster experience, complete with collisions and heartache. This is one certain groups will absolutely eat up as it hits the table again and again.

With excellent production quality and a solid rules manual, one would be surprised this comes from a first-time publisher. It’s devoid of Kickstarter bloat and feels refined. Rotten Games is worth keeping an eye on.

Are you excited for Off the Rails? Let us know in the comments!  And be sure to join host Becca Scott on Game the Game every Thursday here on Geek & Sundry to watch the best board games played with fantastic guests!