We Need More Blockbusters Like AT WORLD’S END - Nerdist

The summer movie season is all but unrecognizable this year, thanks to COVID-19, state-issued quarantines, and the closure of theaters nationwide. Most big-budget summer fare was pushed to latter release dates. Unless you live near a drive-in or have a giant home screen or projector, you probably feel like you’re missing out on a vital summer experience.

But all of this time away from the movies has us feeling introspective. Namely, about what kinds of movies have filled our summers for the last few years. It’s mostly a lot of superhero stuff, some random popcorn action flicks, and maybe the occasional rom-com. And no offense to the modern era of Marvel or Star Wars, but a lot of blockbusters of late feel a little by-the-numbers. When was the last time we got a big, splashy, weird, and totally bombastic summer movie that was genuinely good?

It might just have been with the release of Pirates of the Caribbean: At World’s End. The third film in the Pirates franchise, and what was intended to be a trilogy closer—and still sort of is, depending on how you classify a trilogy—was released in 2007 and made an enormous glob of cash. It got middling reviews, but time has been kind to this one. It’s hard to watch the movie now and not recognize how bold, daring, fresh, and odd it is. We miss when big movies like this took chances.

Here’s everything that makes Pirates of the Caribbean: At World’s End a perfect summer blockbuster, a great franchise-ender, and something we need more of. 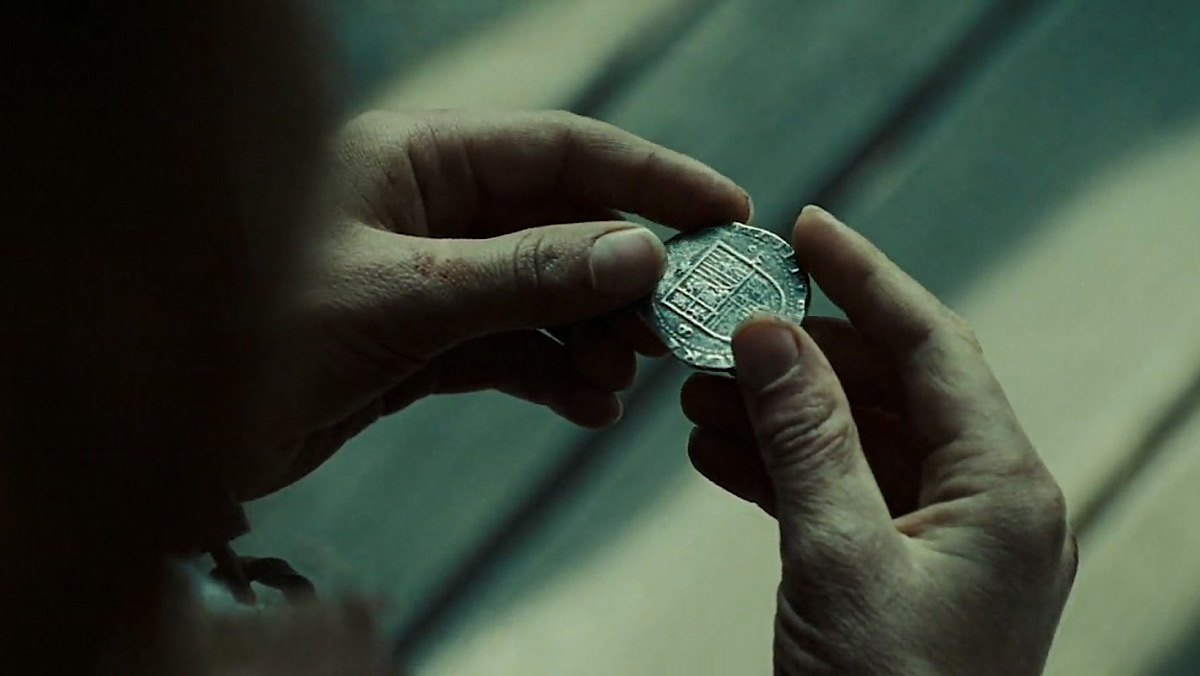 It opens with a melancholy, chilling sequence

At World’s End quite literally opens with the hanging of a young child. Would something like this even get made today? It’s hard to believe this ever came out under the Disney banner. But indeed, the Pirates franchise is about as Disney as it gets; it’s based on the legendary park ride of the same name, a beloved and whimsical bit of Disney lore. So situating this would-be finale in such a shroud of darkness from the outset is a bold choice.

The opening sequence follows a young boy and others imprisoned for their association with pirates as they march to their death. The boy leads a rendition of a melancholy song, “Hoist the Colors,” meant as a call for other pirates to convene and hold a Brethren Court. A unification of the pirates is necessary to defeat the East India Company, led by Lord Cutler Beckett, who want to control the sea and condemn all pirates to death.

This chilling opener sets up all the themes of the film that will follow: it’s uncomfortable, it’s spooky, with an underlying theme of rebellion. It’s a great way to kick things off. 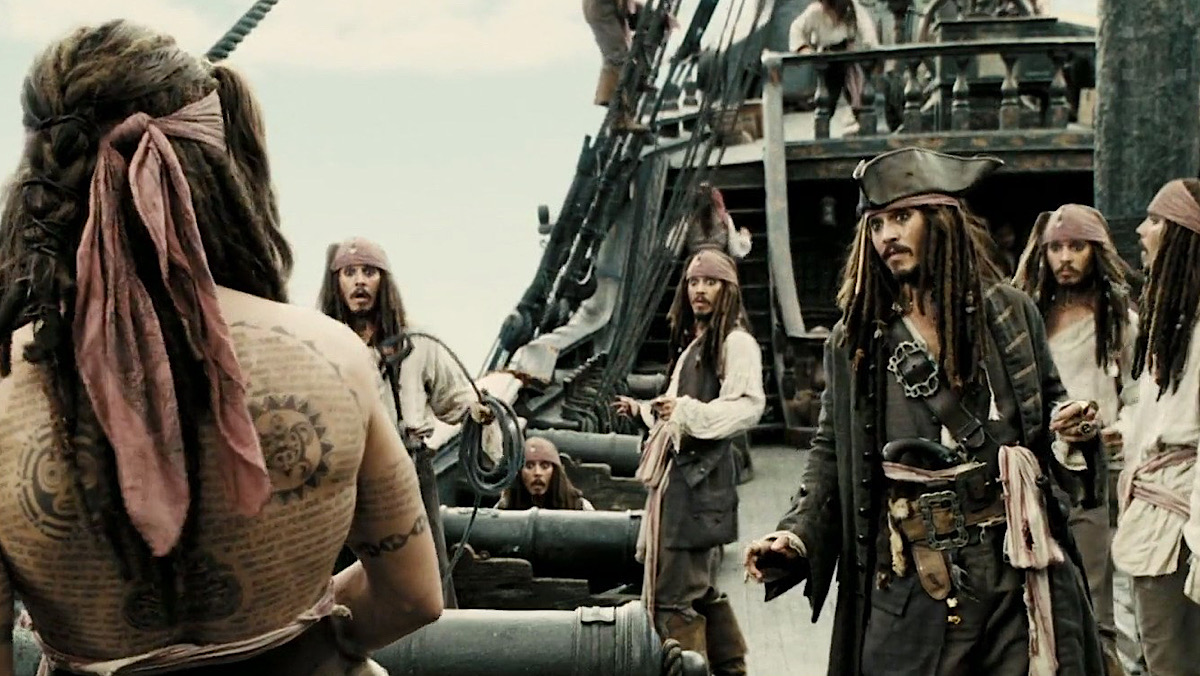 It gets truly weird

We’ll keep this bit brief, since to get into all of the weird stuff in At World’s End would require a viewing of the almost-three-hour-long film. Needless to say, the movie is trippy as hell, with segments set in an underworld location that bends time and physics. The Multiple Jacks bit lasts throughout the film; it feels almost avant-garde. The crustacean-crusted Flying Dutchman ship remains surreally strange, dipping in and out of the water at the command of the tentacled Davey Jones. Calypso shakes out of her human body and explodes into a sea of crabs. Oh, and Keith Richards shows up as Jack Sparrow’s dad.

So much is packed into the plot and visuals that it can feel a little overwhelming. And yes, portions of the film drag on account of its dedication to oddness. The Brethren Court sequence is fascinating in that it introduces us to so many divers and interesting pirate lords, but it also slows the movie for far too long. Still, we respect the hell out of the movie for never making it too easy for the kiddos to follow along. This is a challenging movie with a dense plot. All of the oddball stuff just makes it all the more grand. 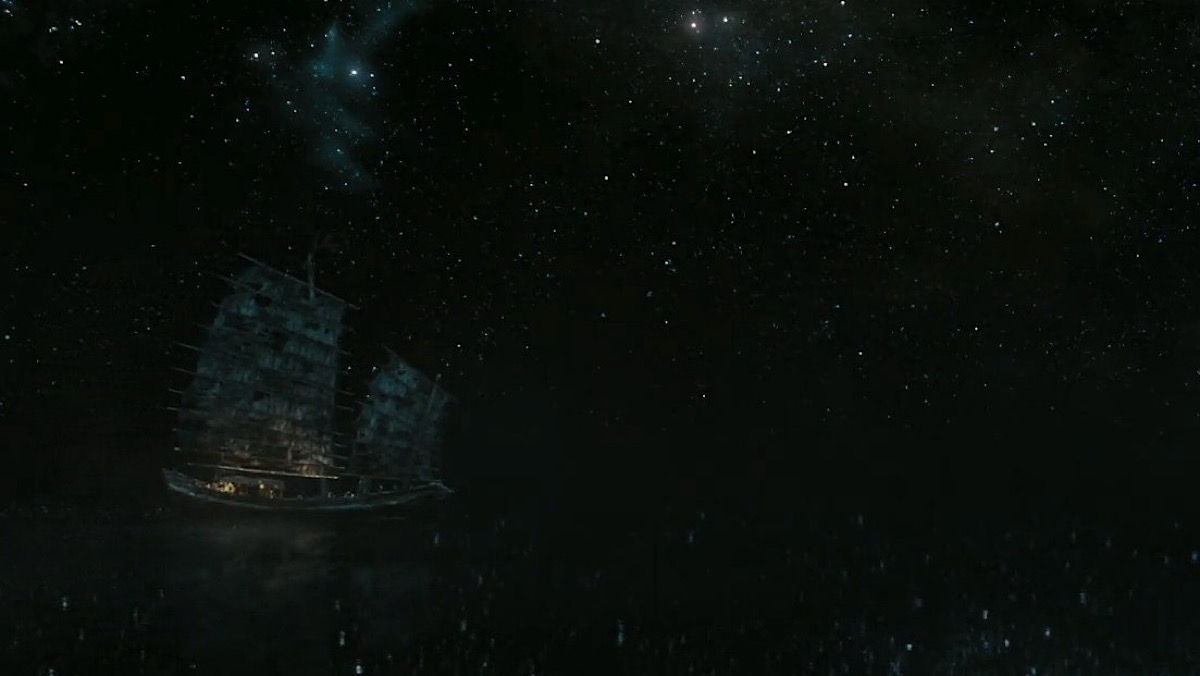 The world-building and cinematography is phenomenal

At World’s End is also visually spectacular. The effects have barely aged a day, thanks to layered and practical sets, beautiful art design, and a unique look singular to these films. You can tell you’re watching a Pirates movie right away.

The sets and locations are absolutely gorgeous and well-realized. The aforementioned underworld, or world’s end, is sparse and sandy and white. The journey there is even more visually rich, with the Black Pearl moving through stretches of ice and a sea of stars. There’s a sequence in Singapore that recalls the studio films of yesteryear; everything is big, bold, and hyper-realized. 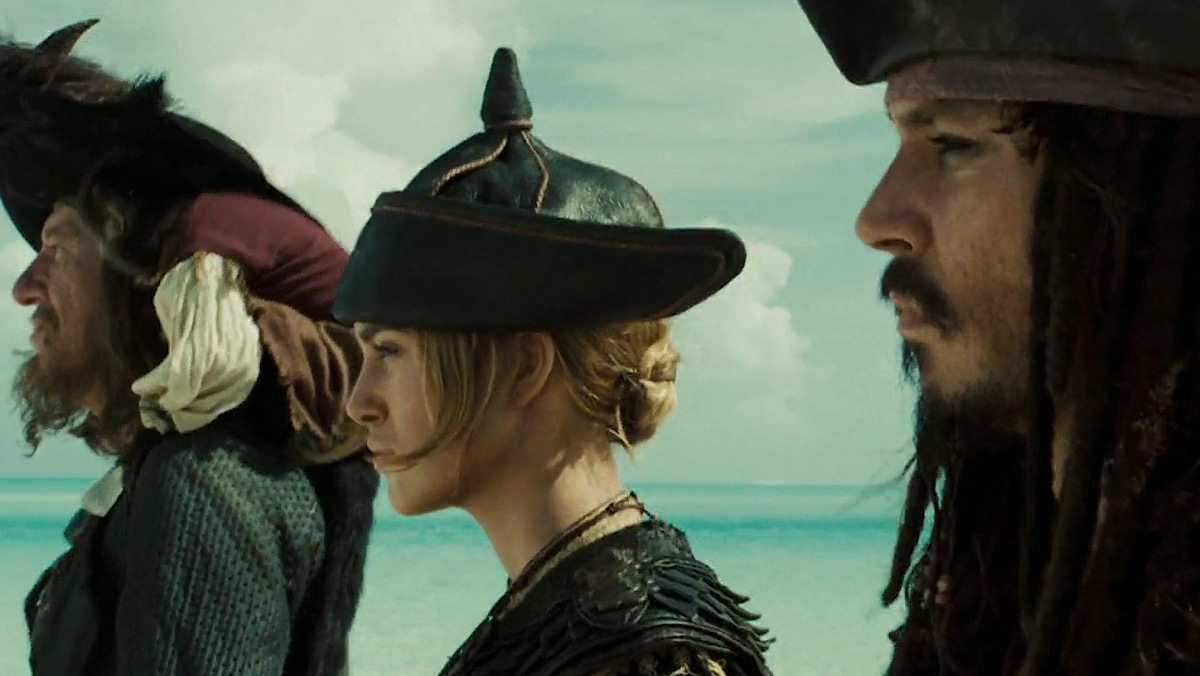 Hans Zimmer knocked the score for At World’s End out of the park. It really is one of his most masterful pieces. Mostly because, on top of the familiar strums of the theme, he had a lot of fun adding new elements. One bit has a rousing guitar solo. Everything swells appropriately, mirroring the extravagant drama onscreen. Tracks like “Up Is Down” and “One Day” are over-the-top and splendid. They’re perfect compliments to the big scenes accompanying them. It’s a master musical storyteller having an absolute blast. 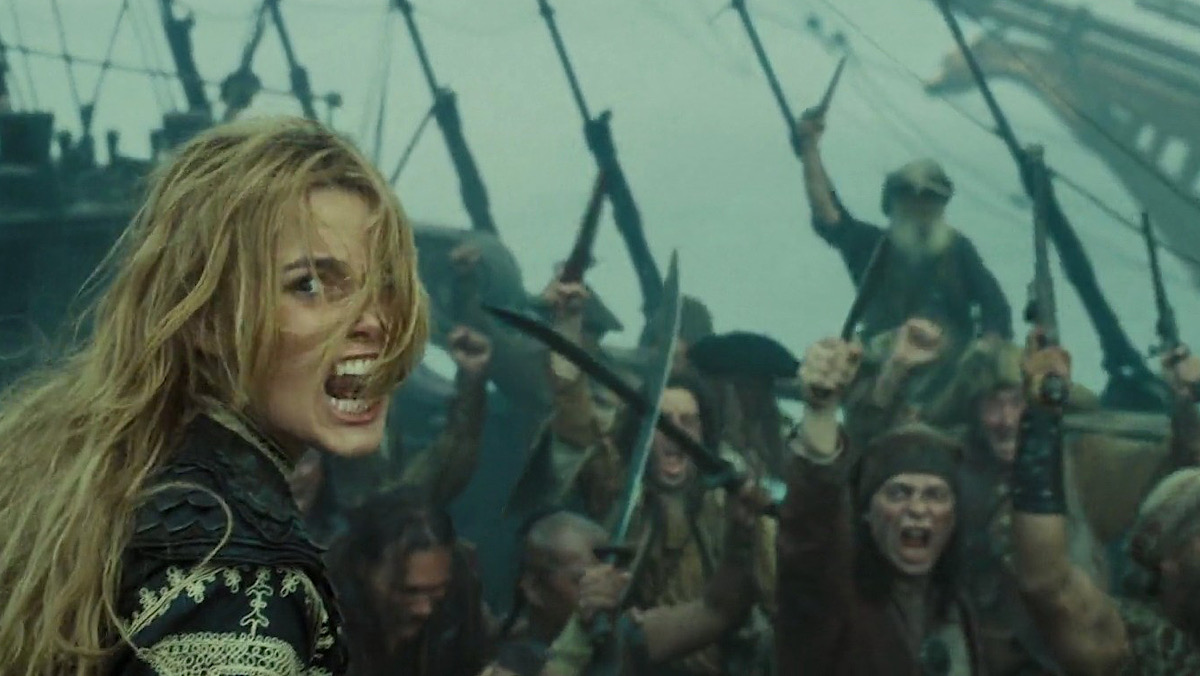 The heroine has the best arc

We’ve already professed our undying love for Elizabeth Swann, but it’s worth mentioning again. The governor’s daughter turned pirate king gets a stellar arc that starts in the first film, deepens in the second, and swells to near-perfection in the third. We watch as her confidence grows, as she gets the title of pirate king, and as she rouses the other pirate lords to war. Her “Hoist the Colors” speech still gives us goosebumps.

In the end, she hands over her pirate king title to marry Will and raise their child. This unsettles some, but it’s perfectly in keeping with the Elizabeth that’s established from the onset. A strong, willful woman who is also inspired by and dedicated to love. And let’s be real, she gets one of the best wedding scenes in any Disney film: waves crashing around her, music swelling, and a magical kiss to seal the deal. 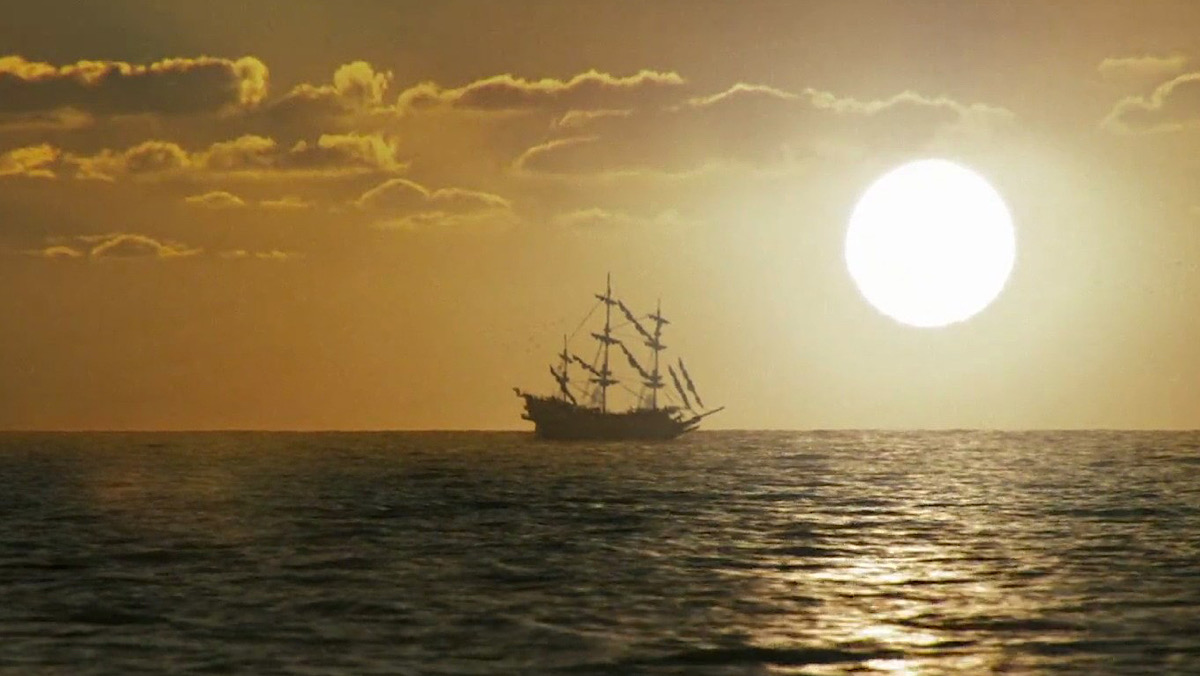 The ending is ballsy as hell

In the end, Elizabeth’s husband, Will Turner, is killed by Davey Jones, a bold and daring choice by the filmmakers. Will—along with Elizabeth—is our hero through the saga. Jack is arguably the central character, but Will gets the chosen one arc. He’s torn between his pirate legacy and his desire to be a good man, and eventually discovers that the two are not necessarily opposed to one another. But then Jones stabs Will in the chest and his story seemingly ends.

It doesn’t, though. The power of the Flying Dutchman curse resurrects Will. He becomes its new and undead captain. So, essentially, he’s a zombie trapped on a boat for ten years at a time, a move that frees his imprisoned father from the same curse while giving his new marriage an air of tragedy.

Disney films aren’t always happy-go-lucky, but rarely do their heroes get such a complicated ending. It’s just another reason we’re glad this ever got made. 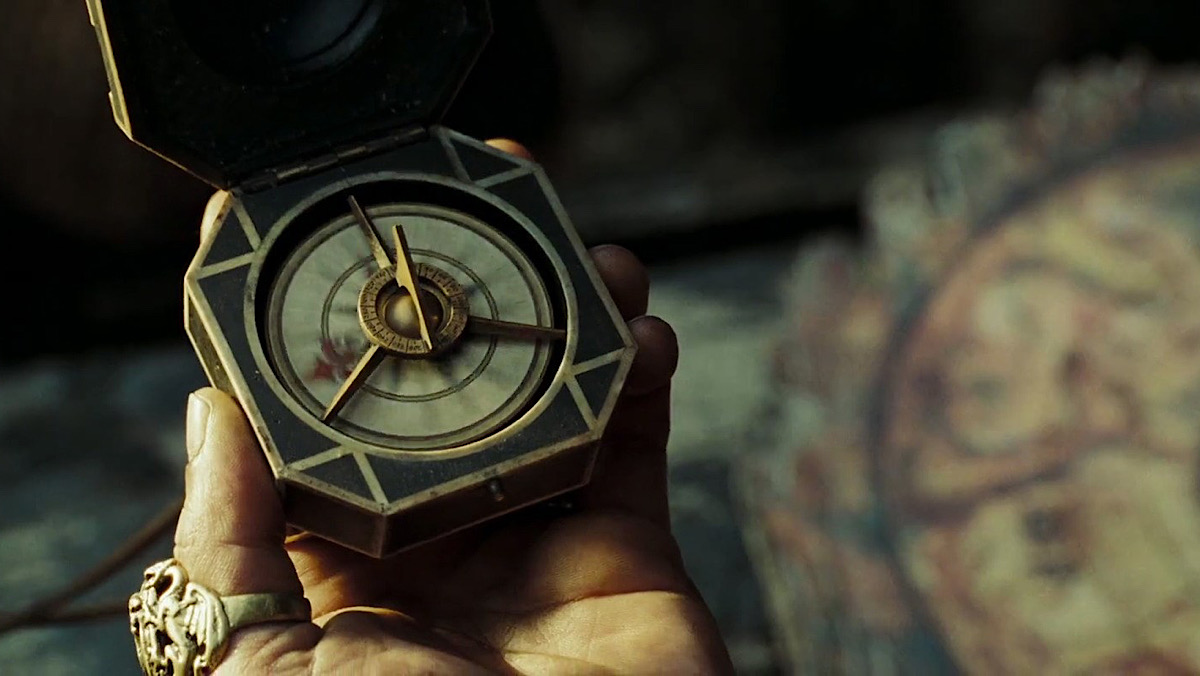 It lets its director have a distinct point of view

The resounding power of the original Pirates trilogy is that it really trusted the screenwriters and director. Writers Ted Elliott and Terry Rossio told the bold and strange story they wanted to tell, about rebellion, family, love, and redemption. And it was brought to visual life by Gore Verbinski, a director who doesn’t get enough credit for how expertly he crafts a blockbuster. At World’s End feels carved out of some maligned material, and that’s why we love it—warts and all. We wish more modern franchise flicks trusted their storytellers this much.