RuPaul’s Drag Race alumnus (and season 11 Miss Congeniality winner) Nina West isn’t just one of the show’s most beloved queens ever—she’s also a big nerd. Specifically, she’s a big Buffy the Vampire Slayer nerd. So this Halloween, Nina has decided to display her love for Sunnydale’s Chosen One with a new music video for her song “Nina the Vampire Slayer.” Nina quite literally “came to slay,” as all legendary queens do.

In this delightful video, she gets some help with a Scooby Gang of her own. The video features a voice-over from former SNL and Hamilton cast member Taran Killam, along with Rupert Giles himself, Anthony Stewart Head! You can watch the full Watcher’s Council-approved video for “Nina the Vampire Slayer” above.

The song tells the story of a group of friends gathered around a campfire to listen to spooky stories about vampires on Halloween. However, Buffy the Vampire Slayer superfan Nina keeps interrupting the storyteller (the voice of SNL’s Taran Killam) with excited references to her favorite episodes of Buffy, accompanied by  animated versions of the original Buffy the Vampire Slayer cast. 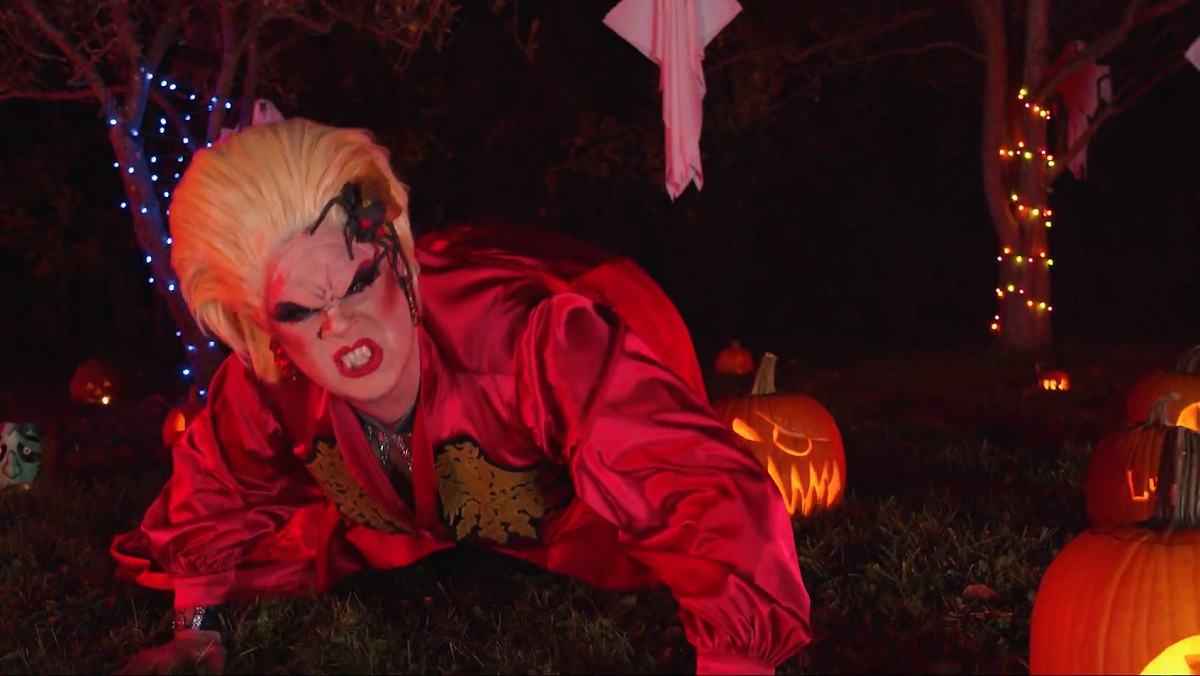 Nina became a Buffy superfan around the time of the show’s final season. She began marathoning the series the old school way: by watching DVD box sets. From there, she became a fan of Buffy Summers for life. As Nina reminded us, Buffy has special significance for LGBTQ audiences. “It’s always had a queer supportive tone. The writing is top notch, and so underrated. Everyone of the characters is intrinsically different. Be they werewolves, witches, etc. And those differences are celebrated.”

So just how did Nina get Anthony Stewart Head involved? “All I did was ask him if he wanted to make a cameo in a drag queen video, and he said yes! His involvement made this feel like a true continuation of the Buffyverse. He gave us a connective tissue to the Buffy universe in a real and beautiful way.” As for Taran Killam, Nina was able to get this BTVS fan via his former SNL castmate Bobby Moynihan.

Nina name-drops two of the most beloved Buffy episodes of all time in the song: the nearly all-silent “Hush,” and the musical “ Once More with Feeling.” But when I asked Nina to name another favorite episode, she had to confess that “The Body” was at the top of her list. Granted, that super heavy episode would have been awkward to casually reference in a lighthearted song like this.

Like any good Buffy fan, Nina also has an opinion on the greatest debate within the Slayer’s fandom. Is she Team Angel or Team Spike? “I love Angel, but I think I’m more Spike.” We agreed with Nina that many LGBTQ audiences seem to prefer the Buffy/Spike relationship, or at least relate to it more. “There was such a heteronormative aspect to Buffy with Angel. But a lot of gay men love something about a guy that’s a little more dangerous, who lives in such a cavalier way.” That’s one way to describe Spike! But we get it Nina. We totally get it.

Here’s hoping Nina slays us all next Halloween with a sequel video. As true Buffy fans know, the Hellmouth always needs defending. So why not defend it with a little extra lipstick and glitter?