The New Cadbury Bunny Is a Frog (Named Betty) - Nerdist

The New Cadbury Bunny Is a Frog (Named Betty)

It’s spring, and that means we have our latest excuse to gorge on candy. Nothing says “Easter!” like chocolate eggs and marshmallow Peeps. The return of warm weather and flowers also means the return of one of the season’s most recognizable mascots. It’s time for the Cadbury bunny to shine.

But this year, that adorable icon looks a lot different. It still has ears and eyes and feet, but that’s pretty much the end to its similarities with past Cadbury bunnies. This year’s creme egg mascot is a frog. 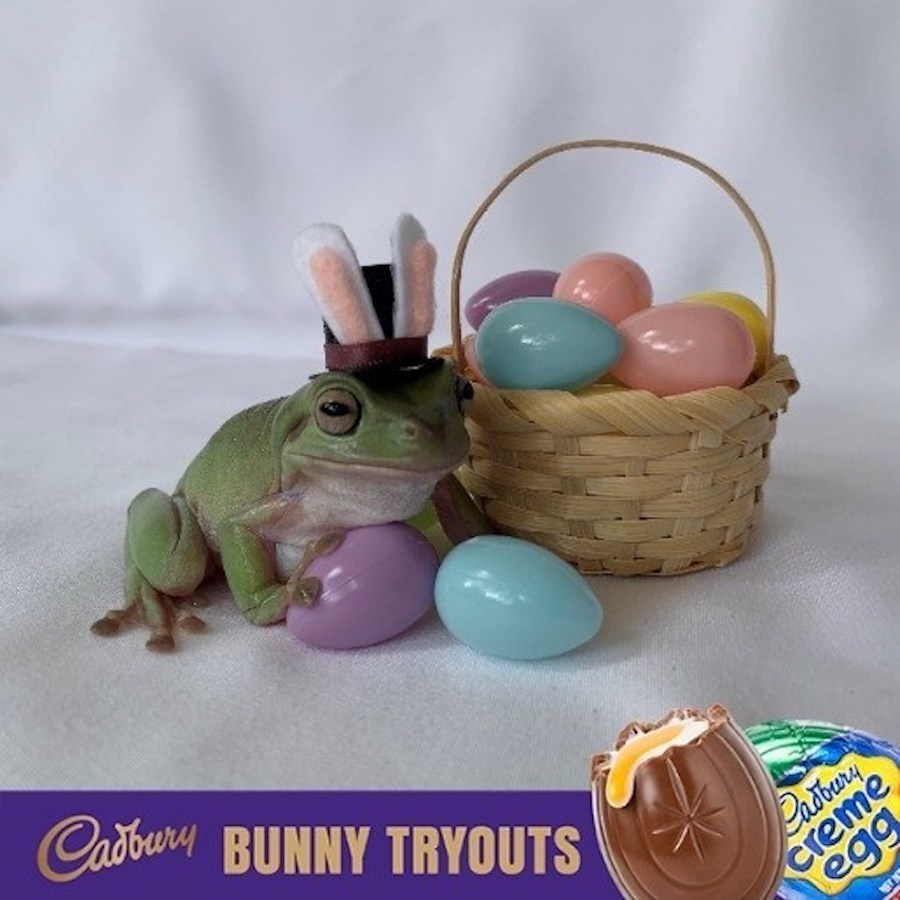 For the third year, Cadbury held a contest to select their new bunny. Once again, it was an open competition. Animals of all kinds were considered, and out of 12,000 submissions, a select group made it to the finals. That included miniature horses, a miniature donkeys, an alpaca, three dogs, a cat, a goat, and even one actual rabbit. But the people voted for Betty the Australian White’s Treefrog from Stuart, Florida. (Whom we first learned about at DesignTAXI.)

In addition to being the smallest winner ever, Betty is the first-ever amphibian to take home the title. And at such a young age! She hasn’t even reached her first birthday yet. Betty takes the mantle from last year’s canine winner, Lieutenant Dan. According to Cadbury and Betty’s owner, she “sleeps during the day, but when the lights go out, the real fun begins.” That will be perfect for hiding eggs while kids sleep.

Betty also “enjoys snacking, bathing in her favorite bowl, jumping around and hanging out with her fellow frog friends.” Obviously we already love Betty and would do anything for her. And we can’t wait to see her full commercial, which will soon debut nationwide.

Betty also took home a $5,000 cash prize. And Cadbury is also donating $15,000 in her honor to the The American Society for the Prevention of Cruelty to Animals.

And maybe one of the animals that money helps save—whether it’s a frog, a rabbit, or something else—will be the next Cadbury bunny.