Raise Your Own Angel With NEON GENESIS EVANGELION Tamagotchi - Nerdist

Raise Your Own Angel With NEON GENESIS EVANGELION Tamagotchi

Neon Genesis Evangelion is one of the most well-known and iconic anime franchises on Earth. Beginning in 1995 with a TV series that revitalized the anime industry, the beloved deconstruction of the Mecha genre turns 25 this year. And to celebrate, Bandai Namco has reimagined one of its most famous creations so that you can raise your very own Angel. Radical!

If you’re a fan of Neon Genesis Evangelion you’ll already the know that the show is set in a post-apocalyptic world where humans have to battle giant aliens—who are known only as Angels—in huge mechanized robots called Evangelions, and if you didn’t, now you do! The big twist here is that the only people who can pilot the Mecha are teenage kids. The original series heavily centers on a young boy named Shinji and his fellow Evangelion pilots as they try to survive and understand the greater war around them.

These awesome Tamagotchi take the sprawling ’90s series and combine it with a classic kids toy, making for a supremely satisfying nostalgia trip. Each of the robot-eggs will allow fans to raise their own alien being with three different variants being released. The Tamagotchi will each have unique animations and designs depending on the one that you choose, and all three are really cool! 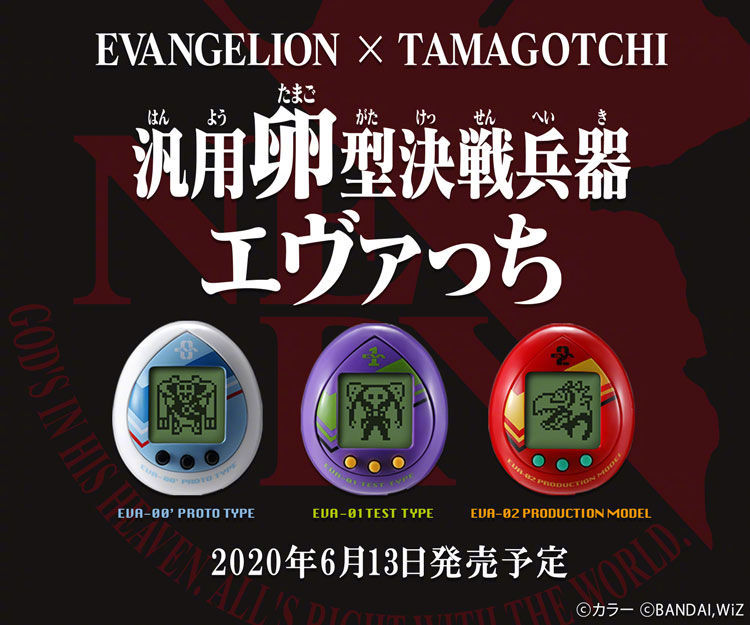 If you’re desperate to get your hands on the special edition Tamagotchi series then we’ve got some bad news: you’ve got a little longer to wait. They won’t be unleashed until June. It’s probably not a coincidence that’s the same month the newest film in the series, Evangelion: 3.0+1.0, is expected to be released!

Basically, June is going to be a great month for fans of Hideaki Anno’s groundbreaking Mecha series. But if you haven’t discovered the joys of Neon Genesis Evangelion yet, you can stream ( a version of) the original series on Netflix now!