There are a lot of “so bad it’s good” Hollywood movies. But the mother of them all, if you can pardon the pun, is Mommie Dearest. The big-screen version of Christina Crawford’s memoir about her movie star mother Joan Crawford was a notorious critical disaster upon release on September 18, 1981. It forever damaged the career of Faye Dunaway, mainly because the Oscar-winning actress portrayed Joan as if she was some kind of crazed clown. It has since become a film parodied on stage, TV, and currently in memes. But LGBTQ communities embraced Mommie Dearest and made it their own over the last four decades.

From Best-selling Book to Camp Spectacle 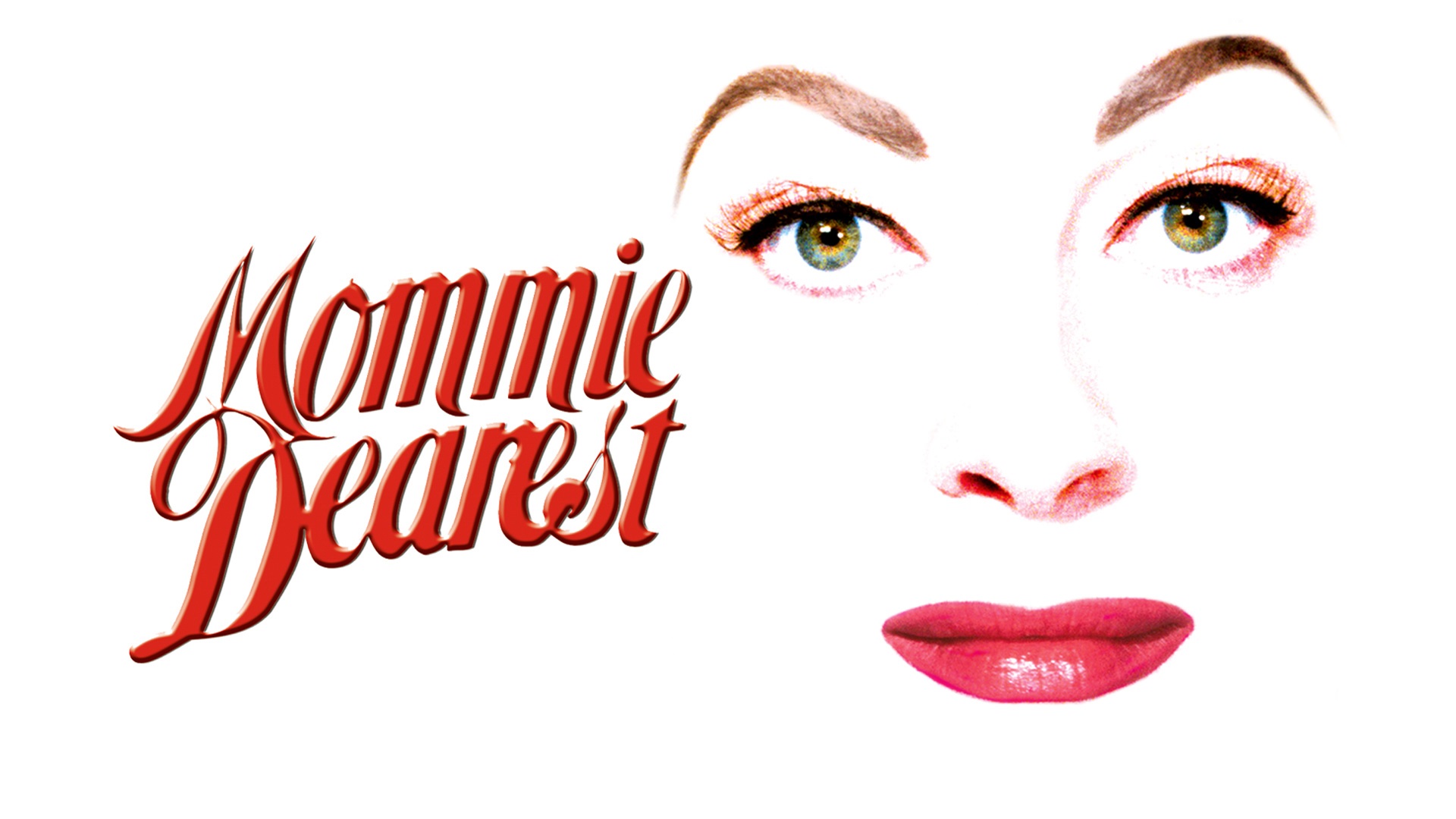 The making and aftermath of Mommie Dearest was a tangled affair. But here’s the short version. After Hollywood legend Joan Crawford died in 1977, her doptive daughter Christina wrote a scathing tell-all book. One of the very first of its kind about any celebrity. In 1978’s Mommie Dearest, Christina detailed her account of the abuse she and her brother Christopher endured at the hands of their mother, who had adopted them both as infants. Readers gasped at Joan’s tirades, including wielding wire hangers as weapons. The book was a runaway smash hit though and, of course, Hollywood announced a film version right away. 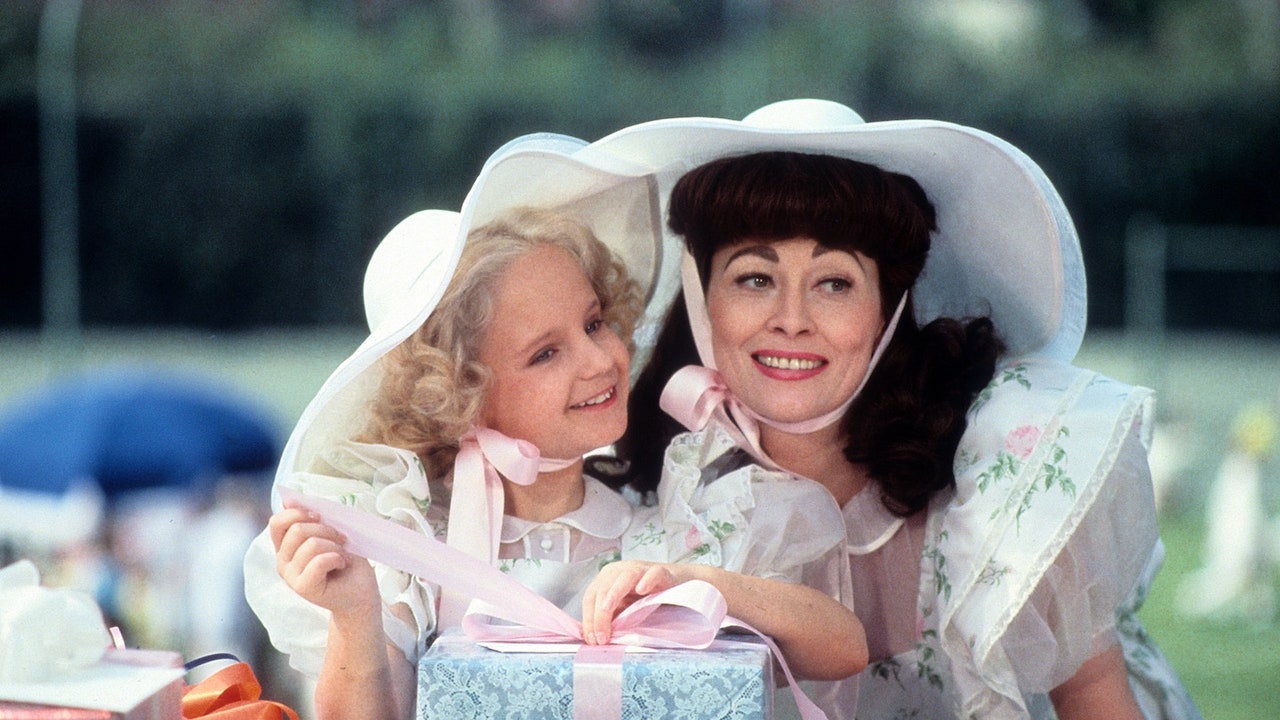 Three years later, Mommie Dearest hit theaters, starring Oscar winner Faye Dunaway in the leading role with Frank Perry behind the camera. Ironically, in the years leading to Joan’s death, she said Dunaway was the only newer generation actress who had the right stuff to play her. (We imagine afterlife Joan might regret that endorsement.) Either by the director’s insistence or Dunaway’s own decisions, her performance of Joan was best described as a sort of Kabuki theater. That’s the fancy way of saying it was extra, as the kids say today. (We highly recommend the video essay from Be Kind Rewind on the making of the film for the full story).

“The Biggest Mother of Them All”

But at what point did the gay community embrace Mommie Dearest and why? Well, for starters, the gay community has always loved the glamorous female stars of old Hollywood. We didn’t earn the nickname “Friend of Dorothy” for nothing, you know. So any queer person of the era already had a long-standing affinity for the high fashion drama queen that was Joan Crawford. And we certainly cared about her long after most straight men had forgotten she even existed. Which was around the time she hit forty. 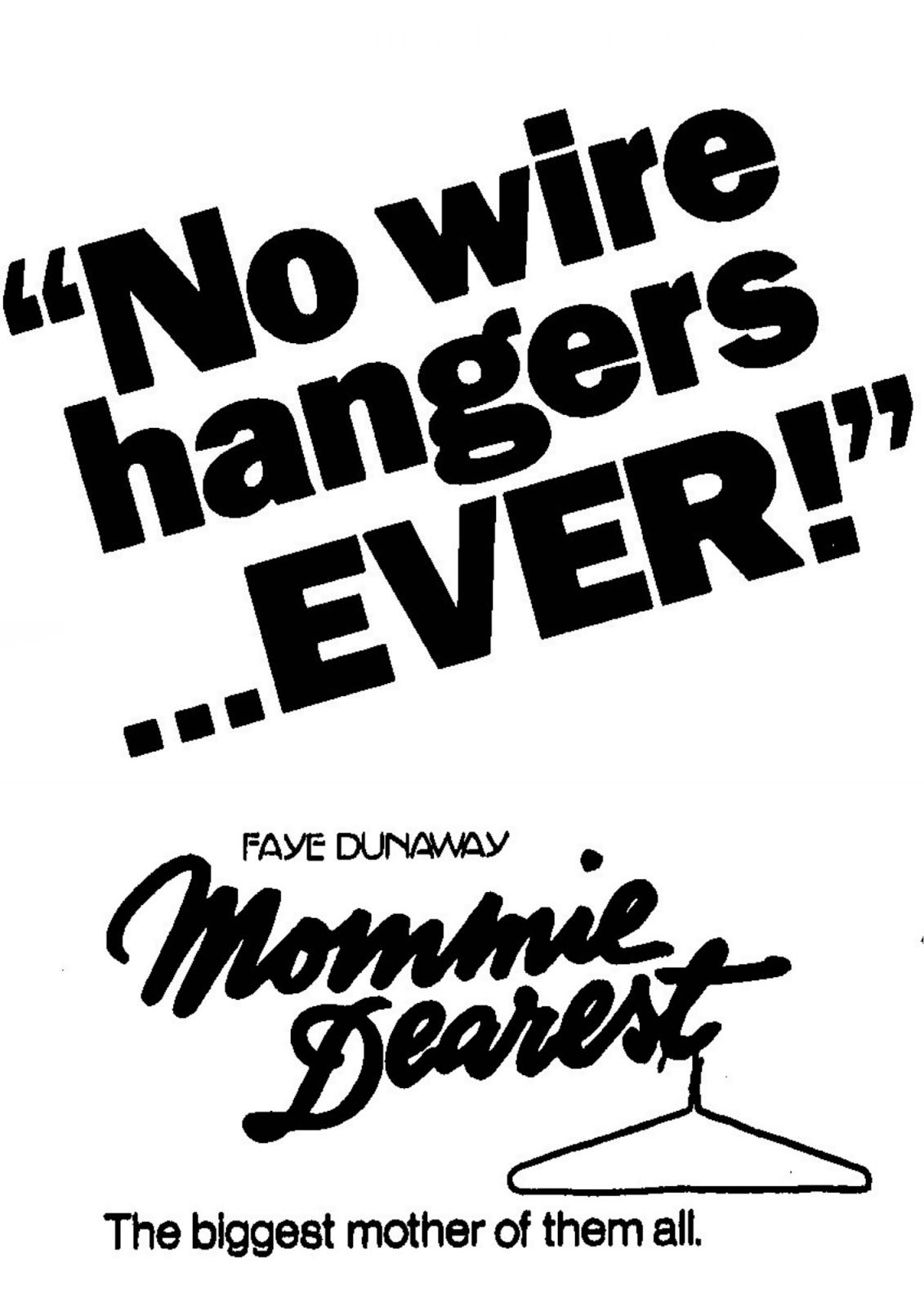 But when the subject of gay fans’ affection became entwined with this over-the-top camp portrayal, it was just too hard for them to resist it. Despite its critical failure, Mommie Dearest was actually a modest box office hit. Mainly because Paramount instantly switched the marketing campaign once they realized moviegoers were laughing in theaters. Post-release ads had the tagline “the biggest mother of them all.” And among those first moviegoers to partake in the camp theatrics were gay audiences. Early on, they were bringing wire hangers to the theater, dressed in bathrobes, and shouting back at the screen, Rocky Horror style. It could have remained a short-lived fad, but didn’t. 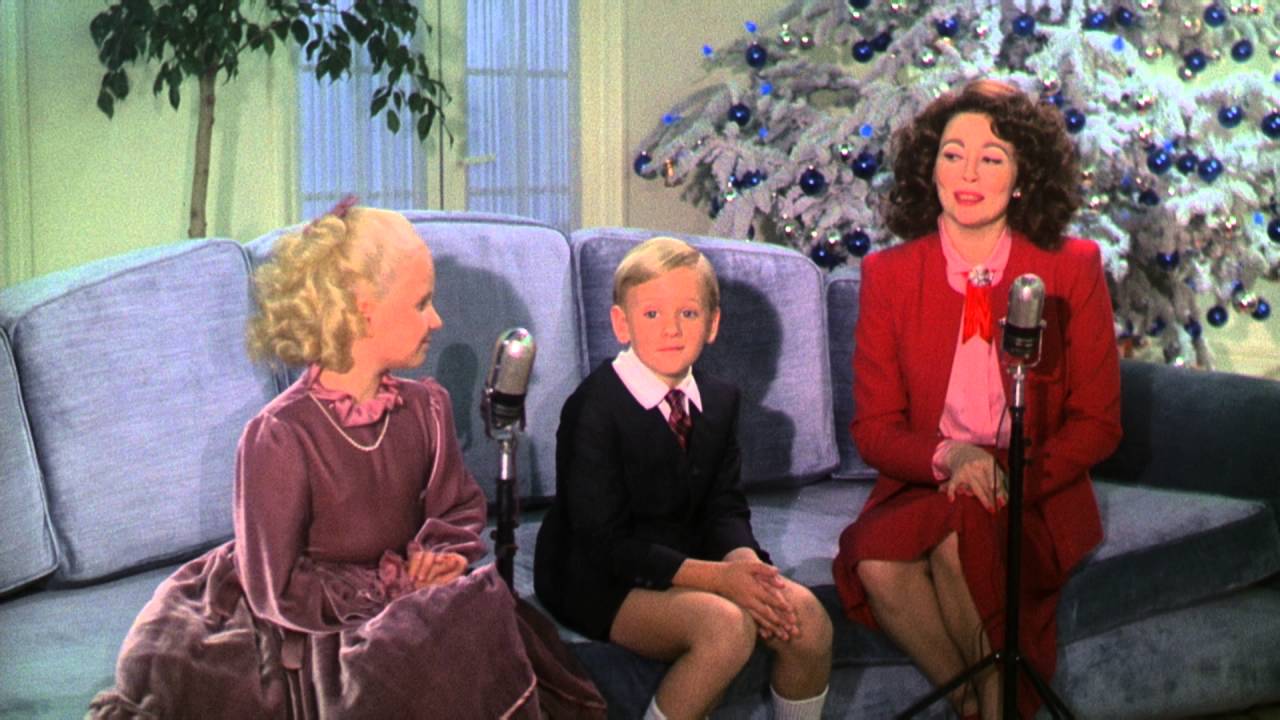 Since Faye Dunaway is essentially giving a drag performance as Joan Crawford, it was really the drag community that elevated Mommie Dearest from the get-go. Drag queens had impersonated Joan already for decades. Just as they had other Golden Era Hollywood actresses. But the fuel Mommie Dearest gave the character of Joan, at least as portrayed in the film, was too much for any self-respecting queen to resist. It’s almost designed for on-stage satirization. Especially with caked-on makeup, wire hangers, and baby dolls thrown about in front of a drunken crowd.

However, Mommie Dearest was more than an ‘80s fad. It became a gay culture institution and touchstone. We can sort of pinpoint this shift back to the early ‘90s. This is when the satirical stage show Christmas with the Crawfords opened in San Francisco in 1992. The play humorously satirizes one particular scene from the film, where Joan trots her kids out to perform for a Christmas radio show. It lampooned all of old Hollywood, eventually taking its performances worldwide and running for decades with a recent showing in 2019. 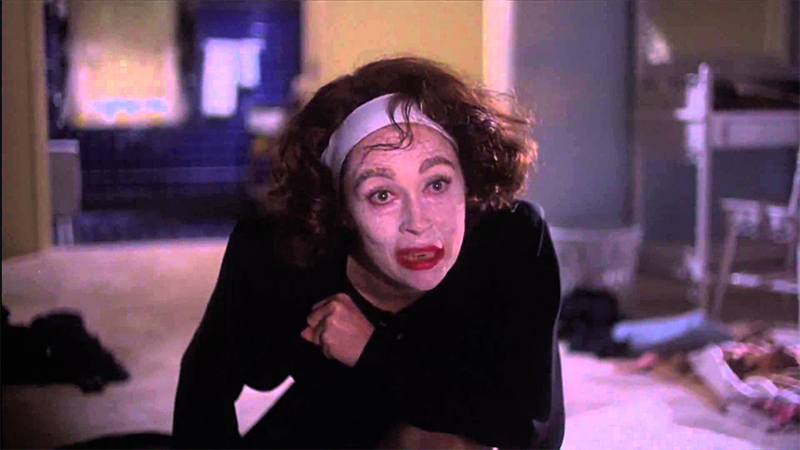 John Epperson, a.k.a drag queen Lypsinka, was another performer who took their love for the film to new levels. Lypsinka famously lip-synchs to meticulously edited, spoken word snippets of over-the-top movie performances. She did an off-Broadway show called The Passion of the Crawford in the 2000s. It mixed in dialogue from old Crawford interviews and movies scenes with Dunaway’s iconic lines from Mommie Dearest.

Subsequently, the DVD commentary tracks for the film have included gay filmmaker John Waters and drag legends like Hedda Lettuce. Clearly, Paramount Pictures is keenly aware of who the legacy of Mommie Dearest belongs to now.

It’s a movie filled to the brim with ridiculous moments, played with either earnest seriousness or daytime soap opera theatrics. There’s no in-between. And then there’s that dialogue. Most of you might have heard “No wire hangers EVER!!” in the past. But for its hardcore fans, there’s also “Tina, bring me the ax!” “I’m not mad at you, I’m mad at the dirt!” “I should have known you’d know where to find the boys and the booze!” And of course, “Don’t f#*k with me, fellas! This ain’t my first time at the rodeo!” And these are just the tip of the iceberg. Over the years, spewing these quotes has been a calling card for LGBTQ fans. A way of letting each other know we’re in the same movie club. 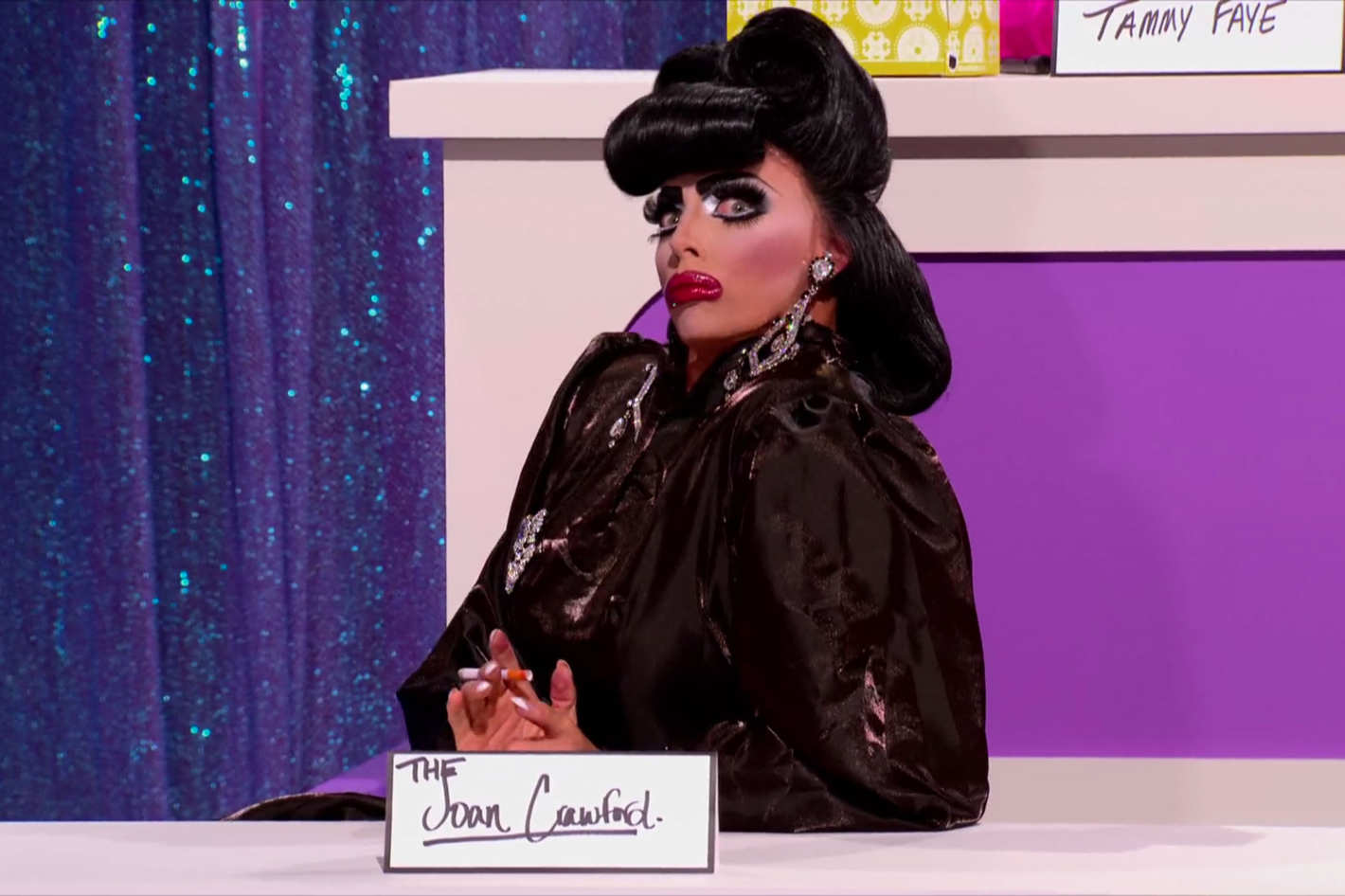 Mommie Dearest might have stayed a pop culture artifact for gays of “a certain age only” if it weren’t for RuPaul’s Drag Race. Over the past decade, the reality competition show has introduced Mommie Dearest to Millennial and Gen-Z gays. Every year, at least one contestant impersonates Faye/Joan on the series’ “Snatch Game” segment. Some are not great, but some have become legendary. Namely, Alyssa Edwards’ take. And queens who gained fame on Drag Race have made videos and live performances galore parodying the cult classic. RuPaul herself quotes the movie almost once per episode. It’s fair to say that without these queens, Mommie Dearest would have fallen into distant cultural memory by now.

When Is it Okay to Laugh at Tragedy? 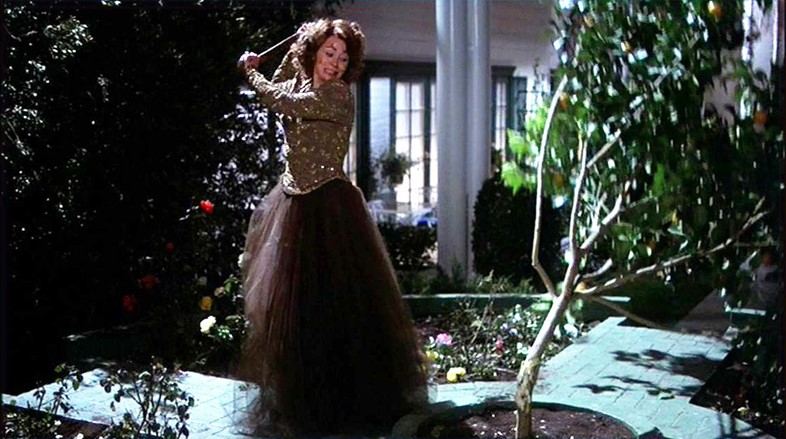 And this is where things morph into something even more fascinating for Mommie Dearest’s gay fans. The conflation of Faye Dunaway the actress with the role she played. A role she has gone on record as wishing she had never done, because of the damage it did to her career. Angry voicemails and reports about Faye allegedly assaulting castmates and producers emerged over the years. And it formed the question “where does Joan end and Faye begin?” And then that persona became fodder for parody, too. Urban legends have persisted for years than Dunaway believes she’s haunted by the ghost of Joan. It’s nonsense, but it would make for a fantastic drag show.

All of this of course begs a rather uncomfortable question. Is it ok for any audience to poke fun at something that is a harrowing account of child abuse? Even if it’s cheesy? Well, Christina Crawford, the author of the book, has disowned the movie. She says it’s a ridiculous interpretation of her life and the events documented in her book. She has no problem with fans viewing the movie as a camp exercise. And she’s even attended screenings of the film in San Francisco’s Castro Theater, where gay audiences howled at the proceedings on screen. If she’s ok with it and views it as ridiculous, that should, in theory, give the rest of us permission to see it that way. But one’s mileage may vary.

The Legacy of Mommie Dearest 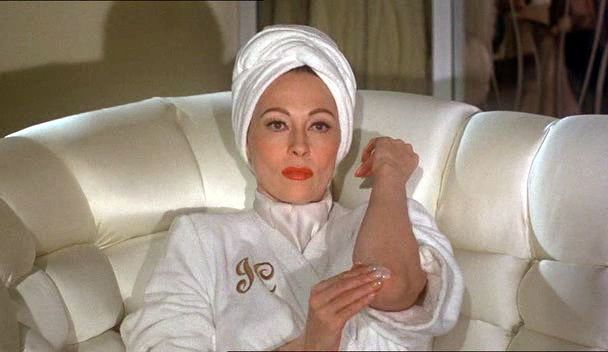 Faye Dunaway famously has no sense of humor about Mommie Dearest. But what would the real Joan Crawford have thought of all these gays paying tribute to her? We can, of course, only guess. But before it was culturally permissible to accept the gay community, Joan publicly said she loved her “homosexual fans.” When her best friend Billy Haines refused to go in the closet in 1930s Hollywood, MGM blacklisted him. Joan helped to create a new career for him as an “interior designer to the stars,” refusing to abandon him. Whatever else she may have been in private, she was definitely an early ally.

Crawford likely would’ve been aghast at the perception that Mommie Dearest created of her in the public eye. Her daughter’s aim to air their dirty laundry, so to speak, initially worked. But there’s no such thing as bad publicity in the end. Unlike many of her contemporaries, almost everyone at least vaguely remembers Joan today. Not too many drag shows or memes in 2021 about Veronica Lake, or Grace Kelly. The camp movie once thought to destroy her reputation ultimately preserved her memory. With a little help from her legion of gay fans, Joan Crawford and Mommie Dearest are staples in entertainment history.