Mike Flanagan is a creator who imbues even the darkest of his work with a shimmering hope. Whether it comes from emotional connection, personal journey, or deep interior examination of the human condition, hope shines through even the bleakest of moments. Midnight Mass continues that trend. Threads of hope weave through the story that catch the light and gleam, but one caught me off guard. In between shining glimpses of cosmic connection, redemption, and forgiveness, there’s a story about disability that contradicts almost everything that the horror genre usually tells us about it.

If you are to believe fiction, you are to believe that disability is horrific. From the wizened, hunched over witches of Grimm’s fairy tales, to the Igor-style mad scientist’s sidekick, to the contemporary facially disfigured villains of Wonder Woman and  James Bond. Disability is often used to horrify, terrify, or occasionally to encourage pity. While stories featuring disabled characters regularly focus on disabilities making our lives not worth living, in horror we often get to see disabled characters but their inclusion is meant to unsettle. Not in Midnight Mass. In fact, in Midnight Mass not only do we get to see a young disabled woman who lives a good life, but we also get to see a subversion of one of the worst kinds of disability stories: the curative miracle that suddenly “fixes” us. 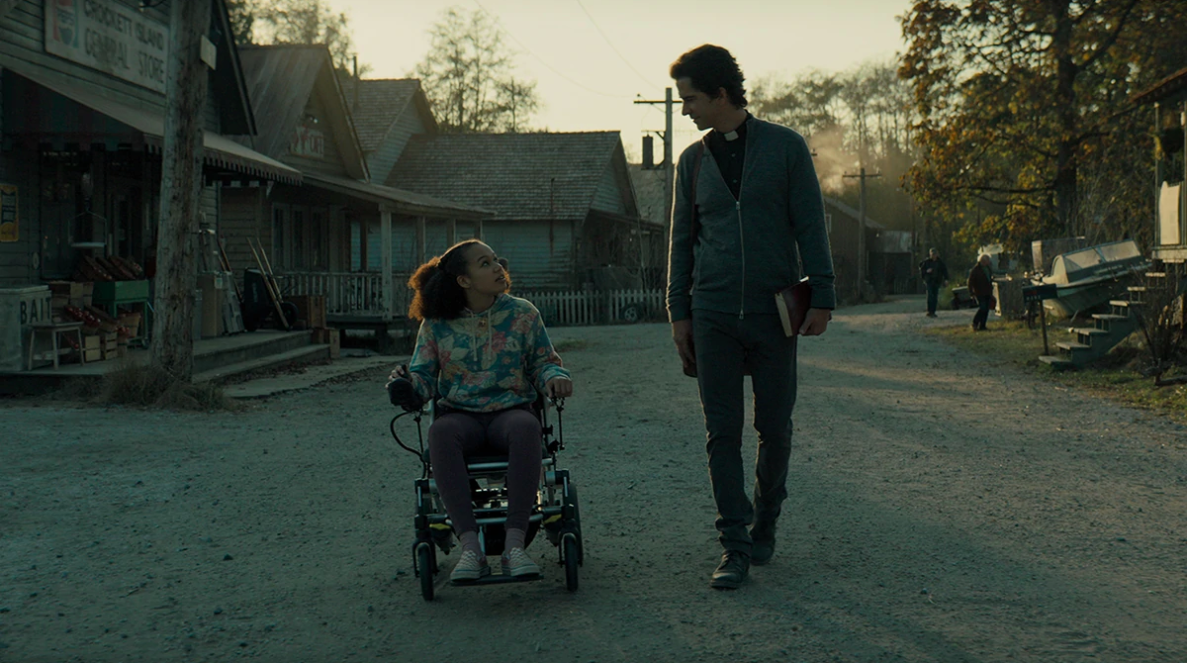 Crockett Island is a small island community, one dragged down by a dying fishing industry. The people who live there, like in any community, live on a spectrum of happiness to despair. One of the people who seems vaguely happy is Leeza Scarborough (Annarah Cymone). Leeza has friends, a loving family, and faith that brings her joy. She’s also a wheelchair user. Years before we join the Crock Pot, she was shot by her fellow islander Joe Collie (Robert Longstreet) in a drunken accident. It redefined Leeza’s life and made Joe an outcast. When Father Paul (Hamish Linklater) arrives, it takes on a horrifying new relevance on the island.

Stories of religious leaders and healers curing disability are as old as the Bible itself. In one famous example, Matthew 9:35 states that “Jesus went through all the towns and villages, teaching in their synagogues, proclaiming the good news of the kingdom and healing every disease and sickness.” There are plenty more like it, and entire branches of religion have been built around the idea that disability can be cured by Faith. Relatedly in fiction, there are entire tropes and subgenres espousing exactly the same idea, even if religion is not involved. Disabilities are to be cured and in doing so the healer does something righteous or good. Not so in Midnight Mass. In fact, here a curative miracle is used to horrify and to tell the audience that things are about to go from strange to downright nightmarish. 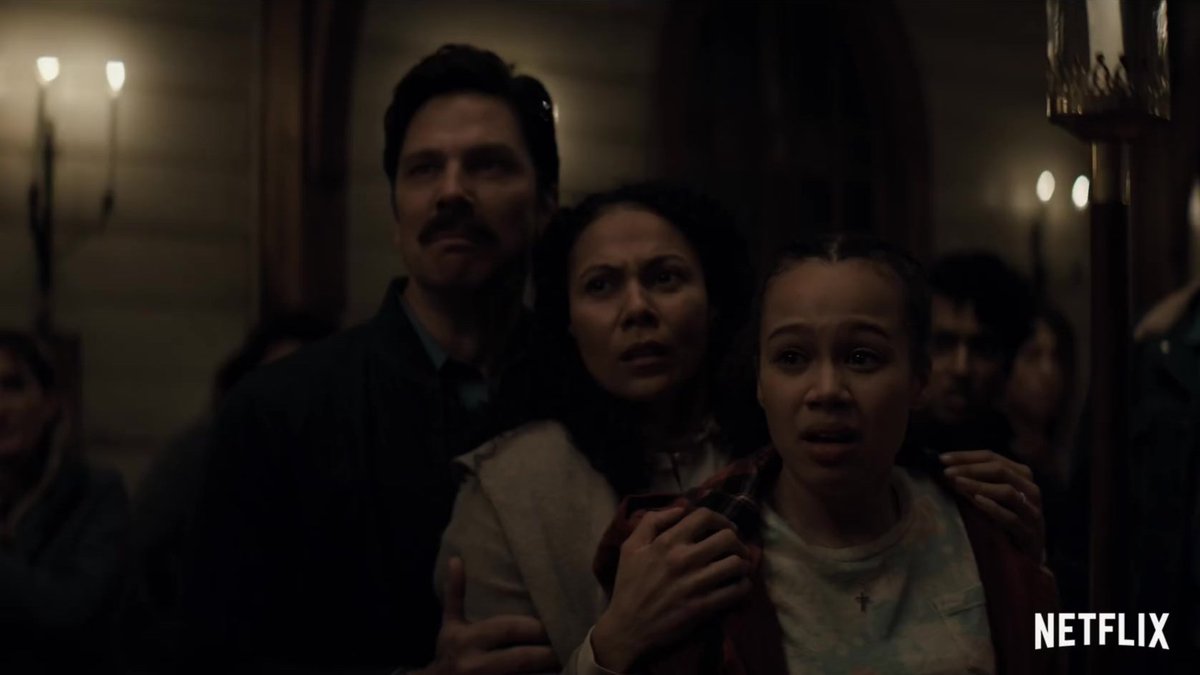 The body horror nature of “curing a disabled person” is not lost on Flanagan, who poses the situation as one of abject terror. It’s also steeped in deep cruelty. As episode two comes to an end, Leeza prepares to take Holy Communion—something she does with more consistency and sincerity than anyone else in town—and Father Paul has a revelation. He realizes that he needs to perform a miracle. He needs something to inspire fervor and faith in the small town, and Leeza is his vessel to do it. It’s an insidious decision that puts Leeza in a horrible position. Her trusted Father Paul refuses to kneel to give her Communion, she must stand. Paralyzed from the waist down, that should be impossible. But against all odds, she walks.

Usually we’re expected to celebrate such an event, a disabled person stepping out of their wheelchair and walking. But here the moral compass of the town, Erin (Kate Siegel), cries out at him to stop. She knows it’s cruel, and when Leeza walks she is outwardly frightened. In case you aren’t sure how to feel, this is not a moment for happiness. It’s one of vast unsettling strangeness, a sign of what’s to come. And while we don’t know it at that moment, it’s later revealed to be the symptom of Father Paul drip feeding the town “ angel” blood. There’s nothing pure or godly here, instead this is a betrayal of their and Leeza’s trust. 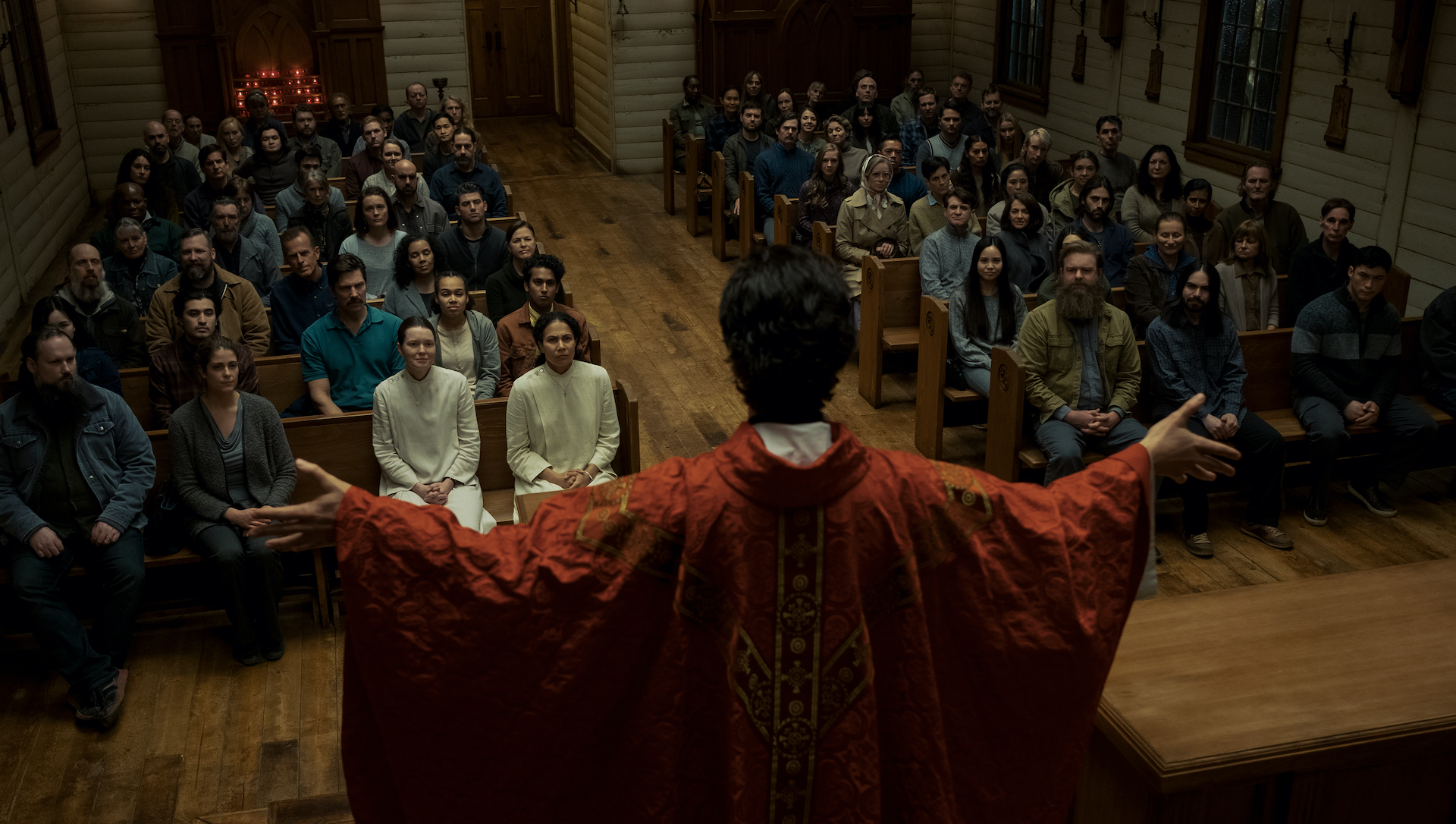 Leeza unarguably gains something from her new status quo. In her ability to walk, she comes to a place of forgiveness, encouraging Joe Collie to forgive himself. It’s a massively powerful moment—and arguably one of the best scenes in the show—but that choice and growth really came from Leeza. Her change in circumstance likely just pushed her to action. Once again Leeza showcases how she’s a wonderful, good person whose kindness can shape and change others. Not in a clean, sanitized inspirational way—another trope we often see in stories about disability—but in a messy, relatable, and human form. Sadly, while Leeza turns her new life into something positive, it radicalizes her parents. Their obsession with her disability translated into a tunnel vision belief in the man and means that cured it.

The misguided idea that disabled lives are less worth living leads to great strife, grief, and trauma in the real world. It can even lead to murders of disabled people—and especially disabled children—at the hands of their parents. In a horrifying echo of that reality, we see Leeza’s parents become at first complicit in murder and then eager to kill their own child. In episode six we see Bev (Samantha Sloyan) and Father Paul’s plan come to fruition. They reveal the Angel, then they try to convince the islanders to poison themselves.

While Leeza and her friend Warren (Igby Rigney) are horrified at the chaos around them, Leeza’s parents submit. Her mother drinks the poison first, while her father encourages Leeza to drink with him. It’s a grotesque showcase of how far they’ll go to keep this version of Leeza, but as they die—only to be reborn—she manages to escape. 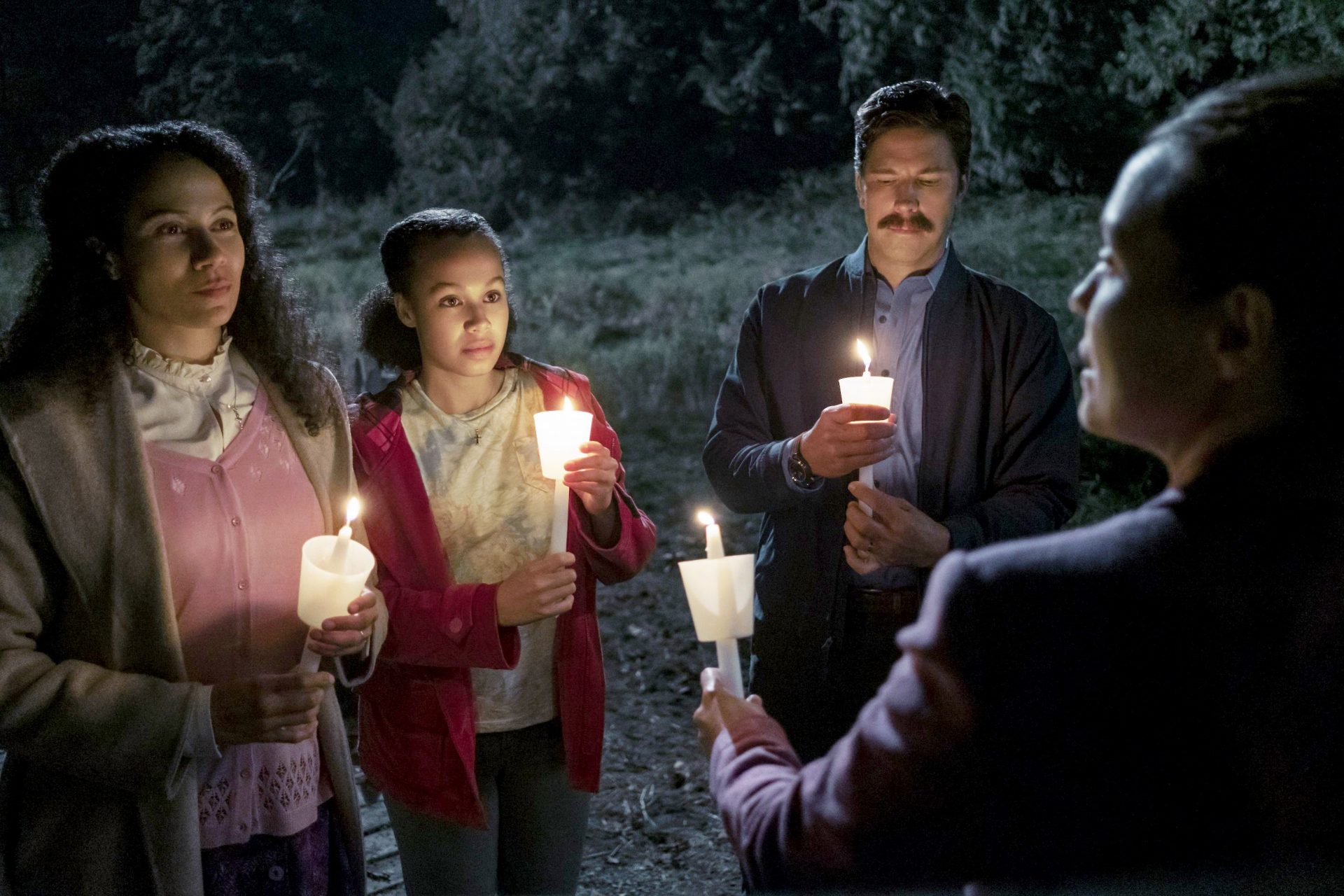 It’s important to note that eventually after a bloodbath and the realization that their lives will end that night, Leeza’s parents try to find their daughter. They seem to want to make amends, and are worried that she too might not survive. But survive she does. In fact, Warren and Leeza are the only survivors of Crockett Island. And as their home burns, they see the Angel—or possible vampire—fly towards the horizon. The question of whether it will make it to the mainland seems to go unanswered until Leeza says the show’s final line.

“I can’t feel my legs,” and then Cymone smiles slightly after she says it. At this moment, Midnight Mass does something I have never seen in horror. It shows disability as hope. Leeza’s paralysis returning means the evil is gone, the blood’s power has rescinded, and she knows this. It’s not bittersweet; she doesn’t cry for the momentary time she could walk again. Instead, she declares it as a victory, recognizing that her life before Father Pruitt was her real life. It was good and filled with love as well as tragedy. Her disability is a return to that. There’s nothing to be cured here, and the cure she did receive was violent and vicious. 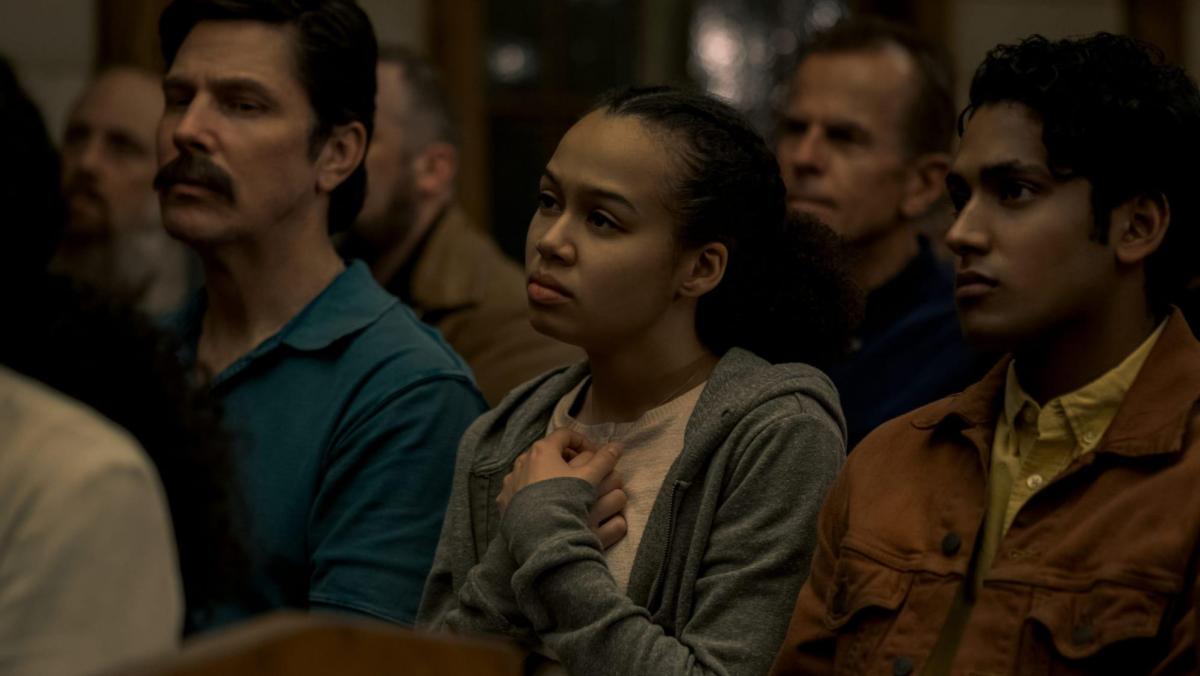 To end the show on this line feels radical. To recognize that a disabled person can be content or even happy with their life in the face of the horrors they’ve faced is huge. Telling the audience that the evil was defeated this specific way feels monumental. And it once again showcases why Flanagan is a master of quiet stories about hope.

Midnight Mass is on Netflix now.