MIDNIGHT MASS, the Lilith Myth, and the Divine Feminine - Nerdist

In Rossetti’s Lady Lilith, a woman — stone-faced, golden-haired — stares into a delicate hand mirror. She is framed in red roses and poppies, nature meddling with her mane. I think of her often; pink hues beset by dark backgrounds, a candelabra set before a window exposing wild fauna. A woman who at first looks vacant, but whose green eyes contain history. Stories of women made evil by legend. Women who wouldn’t comply. Rossetti used his mistress Fanny Cornforth as a subject. A replica of the painting hangs in the Metropolitan Museum of Modern Art in New York City. A verse from Goethe’s Faust (translated by Percy Bysshe Shelley – husband of Frankenstein’s Mary) is paired with it:

“Beware of her fair hair, for she excels
All women in the magic of her locks,
And when she twines them round a young man’s neck
She will not ever set him free again.”

Lilith has been on my mind again recently, having watched Mike Flanagan’s Midnight Mass. It’s a series about so many things that rattle around my brain. The nature of existence, the permeability of faith, what happens when we die. I found myself — a person who healthily questions all of these things — drawn to so many characters. Riley Flynn (Zach Gilford), whose faith couldn’t save him from the addiction that killed a young woman in a drunk driving accident. Dr. Sarah Gunning (Annabeth Gish), a no-nonsense doctor drowning in the science-averse fanaticism in her community. Sheriff Hassan (Rahul Kohli), a Muslim officer whose otherness makes him a villain despite a calm, centered, and rational demeanor. 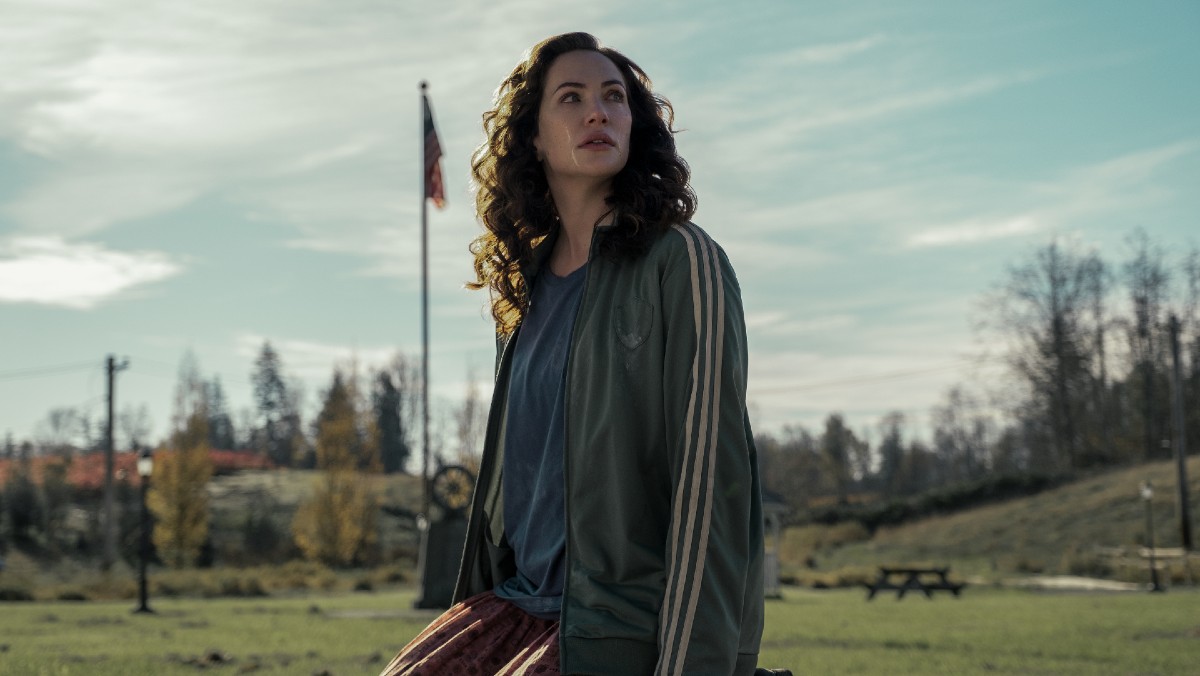 But it’s Erin Greene (Kate Siegel) who I simply cannot shake. A woman, grown and knowing, who escaped the small island of Crockett as a teen and took a bite of the world before coming home, broken and pregnant. When chatting to Riley — her childhood sweetheart, who returns to Crockett Island after a stint in prison for vehicular manslaughter — she reveals she went all over the country. To Austin, Texas, where she joined a rock band. Out West. Then finally to upstate New York, where there were covered bridges. That’s where she got married, we can assume. Where she got pregnant. And where she escaped again, her retreat the home that once caged her. With her mother dead and gone, she could rebuild, without her abusive husband and with the unborn baby she deems “Littlefoot.”

Back on Crockett, Erin finds peace in her mother’s old job as the local schoolteacher. She lives out a better version of her alcoholic mother’s life: in her old home, with her old job, but with revitalized purpose. Her baby will break the cycle of abuse. Unlike the doves Erin’s mother once owned, her child’s existence won’t clip any wings. But then, just like that, the baby is gone — evaporated from her uterus as if she never was. She, Erin decides. She was a girl.

There is perhaps, by these descriptions, nothing inherently Lilith-esque in Erin. And yet, like Rossetti’s painting, Erin evokes the history of feminine pain. Of women scorned and blamed for the sins of mankind. Lilith — referenced fleetingly in Genesis 1:27 (“God created man in his own image, in the image of God created he him; male and female created them.”) and then ignored for Eve — is a Talmudic character. And derives from a more ancient source: a feminine iteration of the Assyrian demon Lilit; her prototype in the Babylonian Epic of Gilgamesh. Myth has made her a succubus, a baby-killer, a “queen of demons,” a vampire. In the Alphabet of ben Sirach, her refusal to give up the dominant position during intercourse with Adam caused her to speak the blasphemous true name of God and fly away into the unknown.

Like many women in history — mythological or otherwise — Lilith is a symbol of the misunderstood. And so it makes sense that she is reflected in Erin Greene, sheathed in floral dresses and fisherman cardigans. Her clothing palette recalling Rossetti’s oil strokes; a juxtaposition of darkness and florals.

In an interview with Vanity Fair, Siegel said of Erin: “She is the goddess that religion co-opted and turned into Mary. [She] is older than the Bible. She is mother earth. She is Wiccan. The only time you would see her in the Bible is in Lilith, who refused to lay down on her back for a man.”

Despite everything — abuse, devastation, the loss of her child — Erin Greene keeps her faith. She attends mass on the island. Radiates warmth and compassion to Riley, who needs (and deserves) grace. Bev Keene slut-shames her. The others judge her. And thus, she is Lilith and she is the divine feminine: the face of the divine spirit connected to the body, nature, and the cycles of creation. 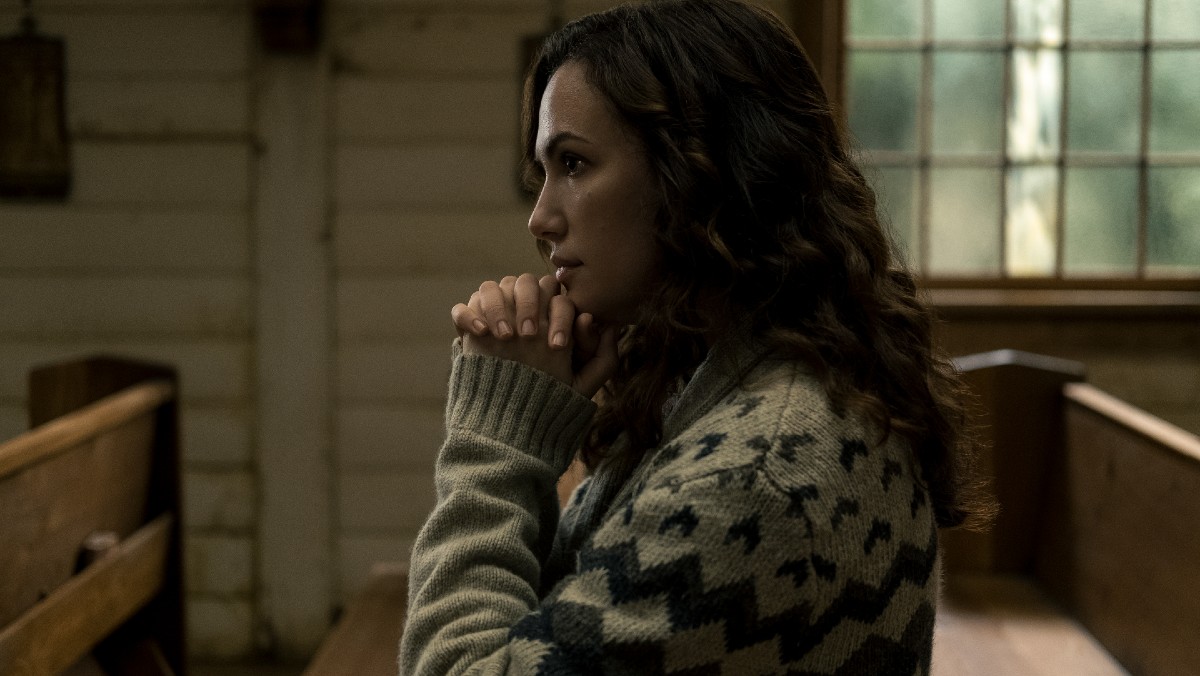 In the end — when the apocalypse paints the sky red, when the demonic angel threatens mankind, when Riley has sacrificed himself and the citizens of Crockett have turned against each other — Erin, in her stillness, adheres to her divinity. She clips the wings of the demon feeding on her, who is blinded by lust. She gives herself up to him. And, in her final moments, delivers a monologue about the actuality of existence that feels like its own kind of scripture. When the memory of Riley asks her what happens when we die she responds:

“Speaking for myself? Myself. My self. That’s the problem. That’s the whole problem with the whole thing. That word: self. That’s not the word, that’s not right, that isn’t — that isn’t. How did I forget that? When did I forget that? The body stops a cell at a time, but the brain keeps firing those neurons. Little lightning bolts, like fireworks inside, and I thought I’d despair or feel afraid, but I don’t feel any of that. None of it. Because I’m too busy. I’m too busy in this moment. Remembering. Of course. I remember that every atom in my body was forged in a star. This matter, this body, is mostly just empty space after all, and solid matter?

It’s just energy vibrating very slowly and there is no me. There never was. The electrons of my body mingle and dance with the electrons of the ground below me and the air I’m no longer breathing. And I remember there is no point where any of that ends and I begin. I remember I am energy. Not memory. Not self. My name, my personality, my choices, all came after me. I was before them and I will be after, and everything else is pictures picked up along the way. Fleeting little dreamlets printed on the tissue of my dying brain.

And I am the lightning that jumps between. I am the energy fighting the neurons. And I’m returning. Just by remembering, I’m returning home. It’s like a drop of water falling back into the ocean, of which it’s always been a part. All things, a part. All of us, a part. You, me, and my little girl, and my mother, and my father, everyone who’s ever been. Every plant, every animal, every atom, every star, every galaxy, all of it. More galaxies in the universe than grains of sand on the beach.

I struggle, always, to understand life and death. To reason out why we are here — why I am here. I deal with many of the things these characters do: trauma, addiction, loneliness for a life I miss; for a life that barely was. But in Erin Greene I find the solace I seek. She is Lilith and she is Wiccan and she is the cosmic answer many of us women both know and seek and once.

We are blamed for the pain we carry for others. We die and we fade and we are what we are. Women staring into a hand mirror. But now, thanks to art like Midnight Mass, we are preserved as we always were: strong, bold, triumphant. And, most of all, everlasting.