Marvel’s Spider-Man isn’t just a great superhero game, it might be one of the best games on the PS4. Period.

For as long as I can remember, Spider-Man has been my absolute favorite superhero thanks to his winning combination of haplessness, earnest conviction, and a biological imperative to crack jokes even at the most inopportune of times. He’s just so damn relatable. As such, whenever there’s a new Spider-Man comic, film, game—you name it—I am equal parts excited and filled with trepidation that they won’t do justice to ol’ Webhead. The boy already lost his parent, his uncle, and a girlfriend; does he really need to deal with a lousy video game too?!

Thankfully, my fears were unfounded when it comes to  Marvel’s Spider-Man. Ever since it was first announced back at E3 in 2016, I have been counting down the days until release. Produced by Insomniac Games and published by Sony Interactive Entertainment, Marvel’s Spider-Man is a PlayStation 4 exclusive. It’s also the most immersive Spider-Man experience you can have short of your uncle getting murdered IRL.

Call it Snarkham City, call it “game of the year contender,” call it whatever you want — just make sure you play Spider-Man as soon as humanly possible. The game releases worldwide on September 7, 2018, but in order to keep your experience as gloriously untainted as mine was, this review will be completely spoiler-free. We will break down some of the game’s easter eggs and secrets in future articles, but if your spoiler sense is tingling, then you might want to go see your doctor. Unless it’s Doc Connors. 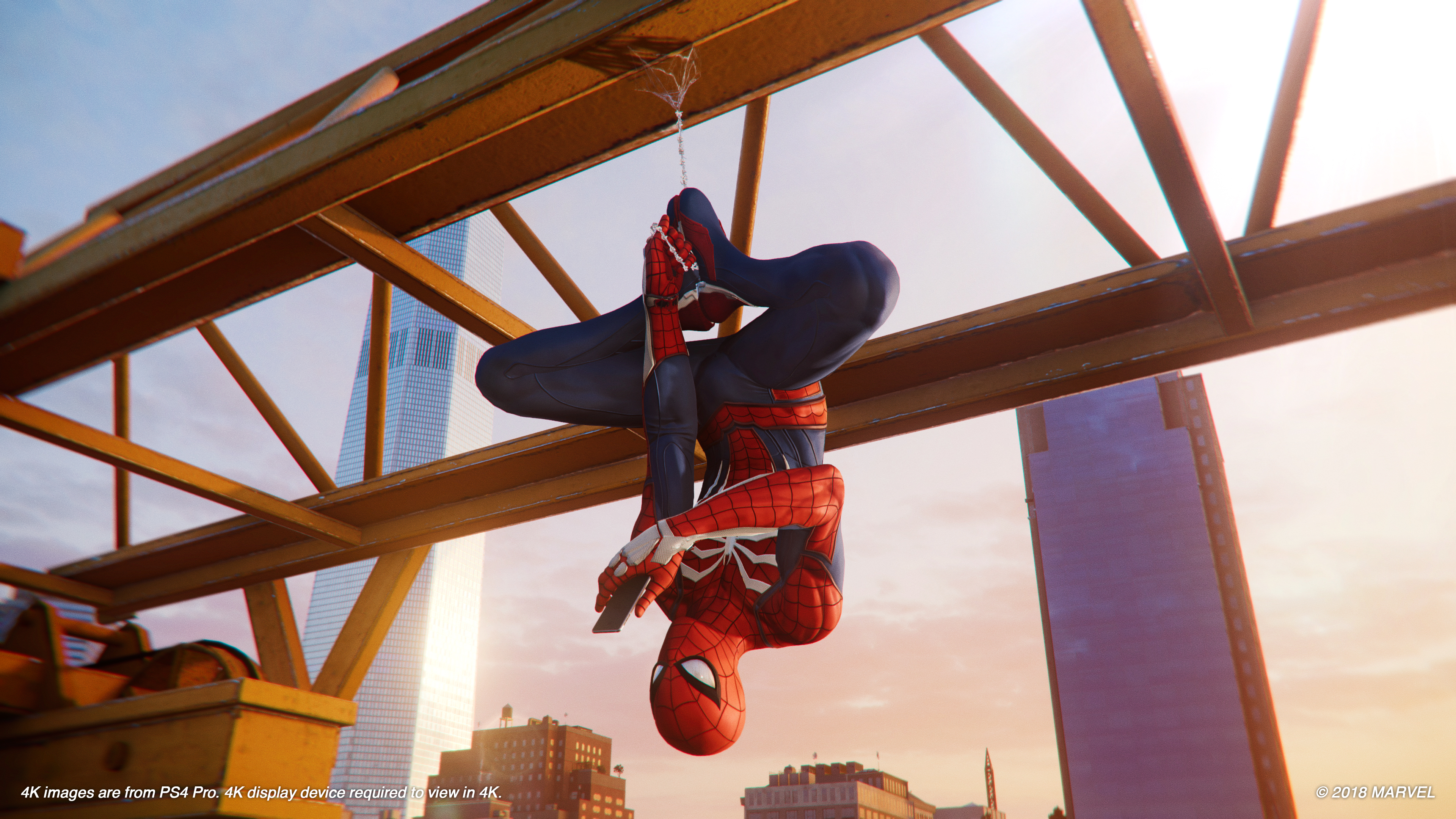 You play as a 23-year old Peter Parker. You’ve been Spider-Man for 8 years already and you’re not just a friendly neighborhood Spider-Man, but the protector of New York City as we know it. It’s a version of the character that feels familiar, but the way the story unfolds is very different than one might expect, and includes plenty of fascinating new narrative wrinkles to make it feel like a bold new chapter in the Wall-Crawler’s storied history. Over the course of the game, you’ll find yourself going up against a murderer’s row of iconic villains like Kingpin, Electro, Mr. Negative, and the Vulture, as well as encounter familiar faces like Mary Jane Watson, Miles Morales, Aunt May, and many, many more unexpected cameos. After Spider-Man takes down the Kingpin, a power vacuum is created in New York City’s underworld, and soon Spidey finds himself–and the people who know him better as Peter Parker–in mortal danger. It’s up to Spider-Man to save the day and the city as we know it before it’s too late.

Speaking of the city, Insomniac’s commitment to recreating Marvel’s New York goes much further than that as you’ll spot Easter eggs galore like Avengers Tower, the Sanctum Sanctorum, Damage Control, and loads of other locations taken straight from the comics. The sheer verticality of this game is staggering and the complete lack of fall damage makes every death-defying fall feel as though you’ve just pulled off something incredible. You’ll be doing plenty of leaping, diving, and swinging too because exploration is one of the purest joys in Spider-Man. 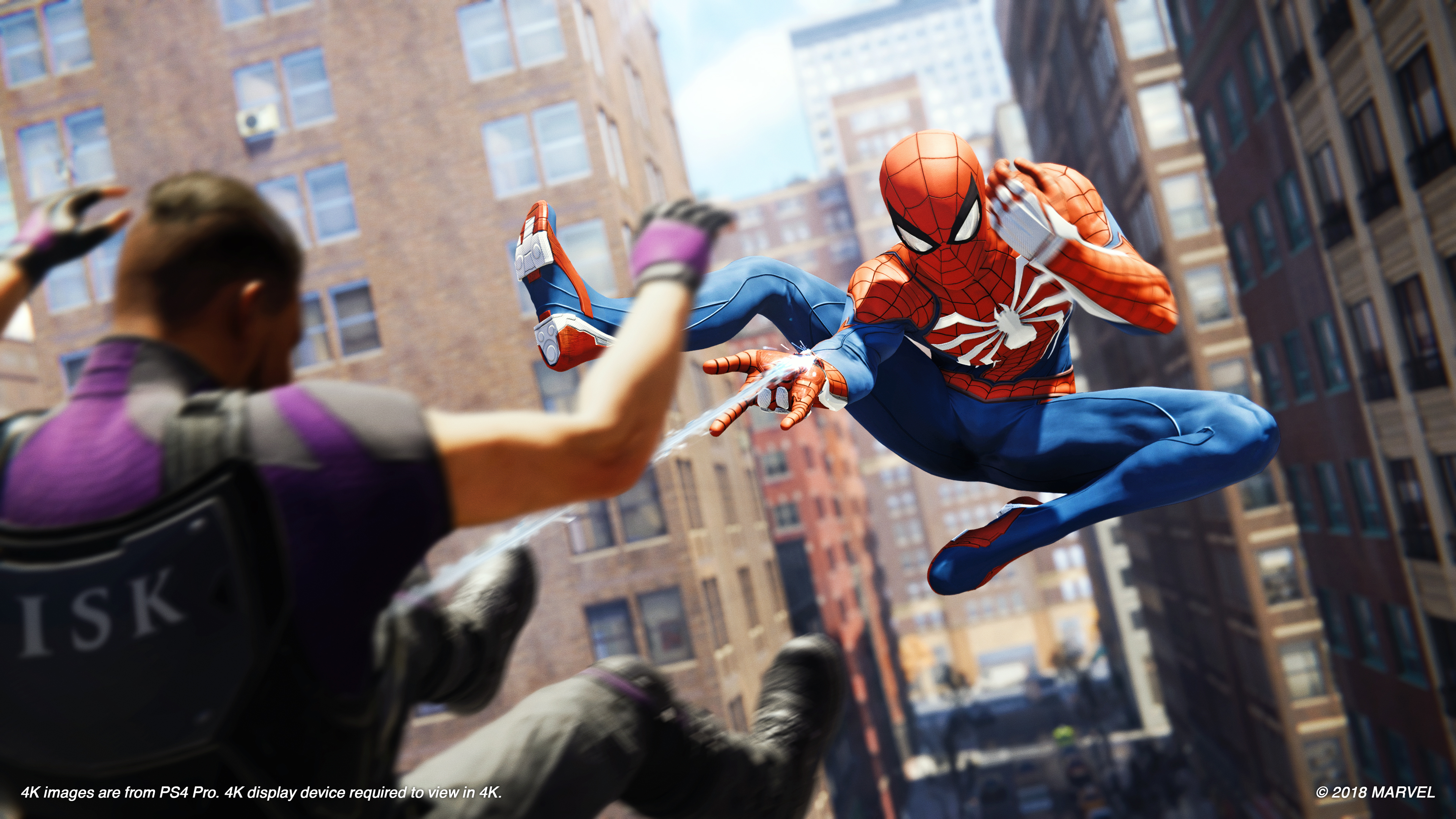 Rarely do controls in a game feel so fluid and satisfying as they do in Spider-Man. Insomniac’s experience with Sunset Overdrive clearly informed how they approached an acrobatic, extremely agile hero like Spidey. Transitioning from soaring across the vast cityscape to combat is a seamless process that feels kinetic, thrilling, and rewarding. From the game’s first moments through its epic finale, swinging around this truly massive version of New York City is an exhilarating experience. Whether you’re climbing to the pinnacle of Avengers Tower or running along walls to launch yourself at breakneck speeds through the city streets, traversal is exquisite in this game. Sometimes I worried that I was letting Uncle Ben down because I was ignoring easily preventable crimes so I could become Peter Parkour instead.

While you’re already the “Amazing Spider-Man,” you’ll get even more amazing as the game unfolds thanks to an RPG-like progression system in which you unlock new abilities, gadgets, and moves by completing missions. Finishing side quests and tracking down collectibles will net you various types of tokens that can be used to unlock new costumes and upgrade gadgets in order to give you the edge in combat. There are more than 20 unlockable costumes–including deep cuts like Spider-Punk, Spider-Man Noir, and Ghost Spider–which unlock new super moves that will constantly give you new moves against the many bad guys whose butts you’ll kick. 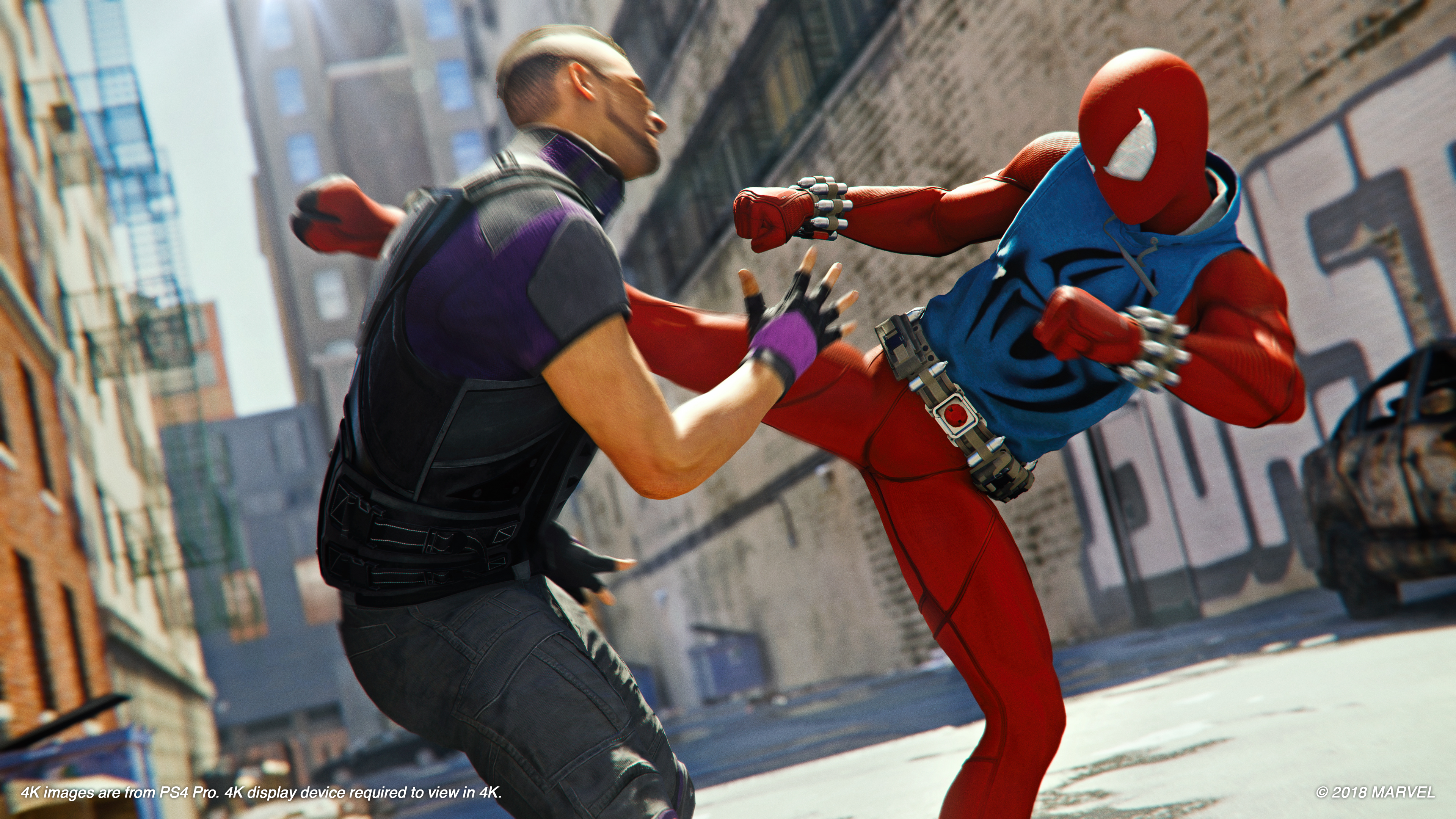 While the game is incredibly polished, exceedingly addictive, and tremendously fun, it does occasionally suffer from some of the same issues that I’ve had with the Arkham games, a series with which Spider-Man shares many commonalities for better and for worse. You are slowly introduced to new enemy types over the course of the game, but combat can fall into a familiar rut as you clear out the same several enemy types over and over again in an effort to clear the map of tiny icons. Using gadgets, stealth takedowns, and Spider-Man’s admittedly large array of moves is rewarding at first, but it dulls over time. The result is an occasional sense of fatigue during the middle portions of the game where you don’t feel quite as enthusiastic about clearing out the umpteenth construction site full of waves of gun-toting goons.

Although the story is well-paced and engrossing from a narrative perspective, many of the boss fights have a tendency to feel anticlimactic by comparison, usually requiring the player to utilize some aspect of their environment before repeating a series of close quarters combat combos to defeat them. None of these issues are enough to tarnish the overall experience of Spider-Man, but they are worth noting since the game is such a spectacular experience otherwise. Even after a less-than-thrilling combat encounter, you’ll feel an all-too-familiar rush of endorphins as you resume swinging around the city and remind yourself that you can, in fact, do whatever a spider does. 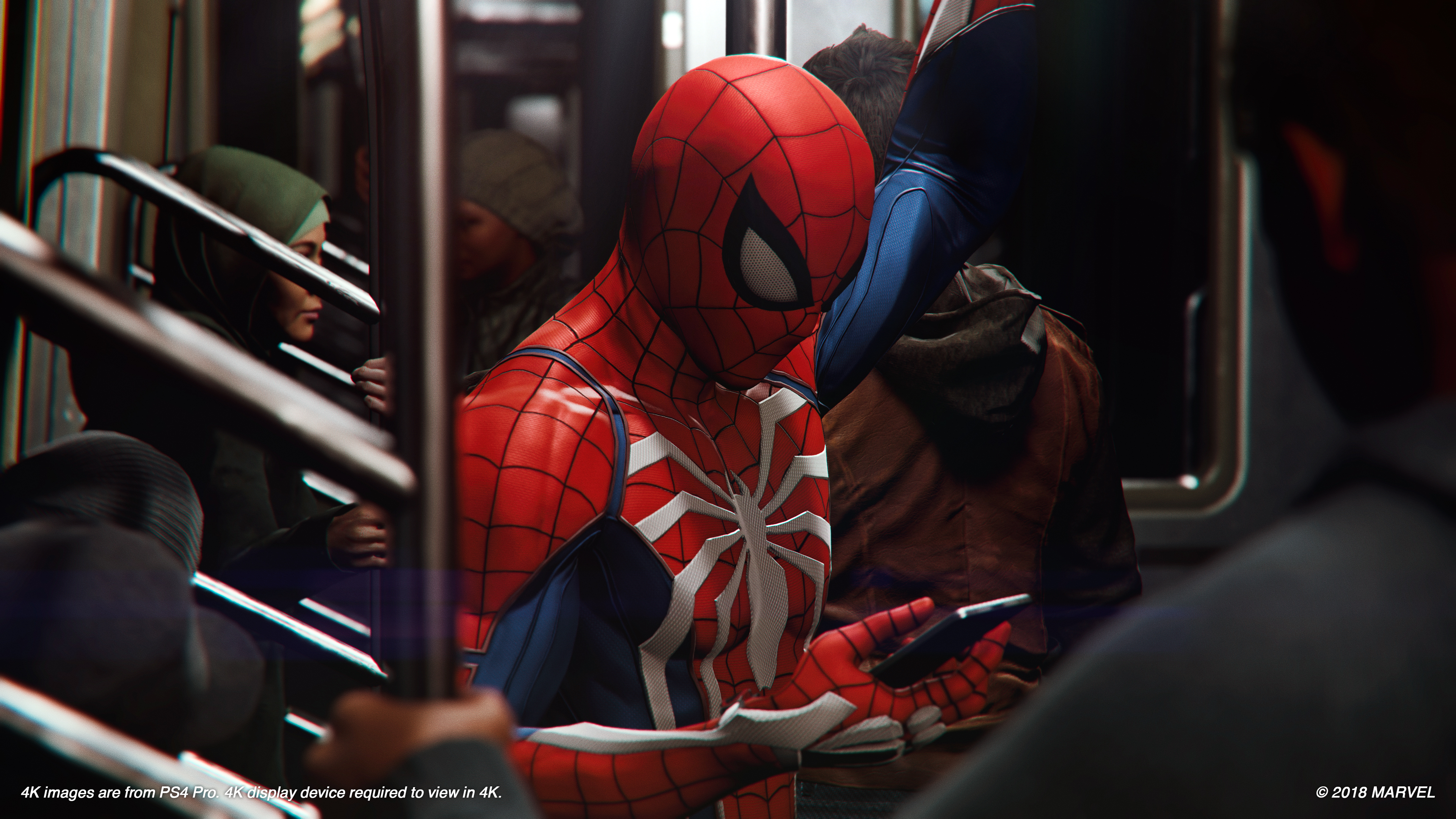 Graphically speaking, the game is aesthetically pleasing and offers some seriously gorgeous vistas of New York City, but it doesn’t have the same wow factor as other recent PS4 exclusives like God of War and Detroit: Become Human. Granted this may be alleviated if you’re playing the game on the PlayStation 4 Pro in 4K  (which I did not; this version was reviewed on a standard-issue PS4), but it’s worth noting if you were expecting every scene to look like a cut scene or as pretty as some of the screenshots floating around online.

But here’s the bottom line: Spider-Man will provide you with hours and hours of entertainment and is an absolute must-play for anyone who craves open-world action-adventure gameplay with an endless array of things to unlock. Much like the Arkham games revitalized Batman, Insomniac has breathed new life into Spider-Man as a video game franchise. They were given a great responsibility and they have delivered a truly great game. If you own a PlayStation 4, you owe it to yourself to play this.

What do you think? Will you be playing Spider-Man? What Marvel characters would you most like to encounter in-game? Let’s discuss.