Alien: Covenant, the next chapter in the Alien movie saga, is set to hit U.S. theaters on 19 May 2017. I’m absolutely looking forward to seeing it, and finding out how director Ridley Scott connects this movie to the first Alien movie, which he also directed, and which began the whole Alien saga.

All the recent Alien: Covenant hype sparked my imagination with thoughts of D&D adventures with alien creatures replacing those too often used. Creatures from the Far Realms, generally the type known as Aberrations, are the best (but not only) ones to use for alien encounters of the 5th edition kind. Here are my picks for aberrations that I think would make for excellent alien adventures.

The Gibbering Mouther (MM p157) is one of the most horridly grotesque monsters in all of D&D, making it perfect for an alien encounter where you want to ratchet up the horror factor. The Monster Manual states these aberrations were made by some foul sorcery, but it’s what they are made of that is the kicker: “This creature is the composite eyes, mouths, and liquefied matter of its former victims.” Ugh.

Its Mouths of Madness feature (a cacophony of gibbering, ranting, and wailing) can cause other creatures to flee in terror, or stand paralyzed in fear and madness. And when you fall prey to a gibbering mouther; it consumes you so entirely that your body becomes a part of its body, your mouth and eyes becoming a part of its flesh to seek out and devour the next victim. That’s one helluva way to die. 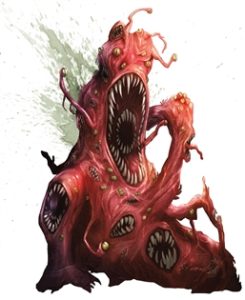 Brains are not supposed to be floating around, or have beaks, or barbed tentacles. But that’s the exact alien freakishness that makes a Grell (MM p72) perfect for this type of encounter.

Grells have acute senses, despite not having eyes and ears, and are sensitive to vibrations, making them difficult to sneak up on. They use those advantages along with their silent movement to ambush their victims, paralyzing them with poisoned barbed tentacles and retreating back to the lair. What a grell does with its victim then is anyone’s guess, unless you’re a Dungeon Master. Then, you probably know exactly what happens. 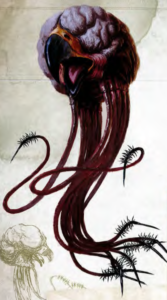 Neogi (Volo’s Guide to Monsters p180) are spider-like aberrations with long necks and humanoid faces. They strike me as alien for two reasons: they resemble “Skitters” from the sci-fi TV show Falling Skies; and they make me think of another great alien movie, The Thing (1982 version), the scene where that dude’s head pulls itself off its body, sprouts spider legs, and goes running off. (Gets me every time.)

If being aberrations isn’t bad enough, Volo’s Guide also calls them “Alien Tyrants”, and says they can be found on the Material Plane, the Feywild, the Shadowfell, as well as the Astral and Ethereal Planes. That sounds like a full-on invasion to me. Along with their desire to conquer and devour, neogi also have a keen intellect, and make devious traders and shopkeepers. So, invasion force or occupying force? That’s for DMs to decide. 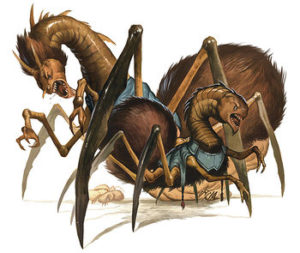 Slaadi (MM p274) are frog-like aberrations from Limbo, and are severely underused monsters in D&D adventures. If there’s any other race that can compete with Mind Flayers and Gith for universal dominance, it’s the Slaadi.

Slaadi come in five types: red, blue, green, gray, and Death Slaad. Each type has traits that would make for a fine alien encounter, but take a look at the red slaad in particular. When attacking, they can inject a victim with a slaad egg. Then, in true Alien xenomorph fashion, the egg gestates within the host until it becomes a slaad tadpole. The tadpole then eats its way out of the host, and will eat the hosts’ remains before scampering off to find another meal.

That’s an almost perfect setup to replicating as close as possible the look and feel of the Alien movies within a D&D adventure. No exact time is given for how long the egg gestates inside the host, or if a host would show any sign or symptoms of having an egg within them. And having the tadpole burst forth from out of the host is just too rich an opportunity to not include in your story. 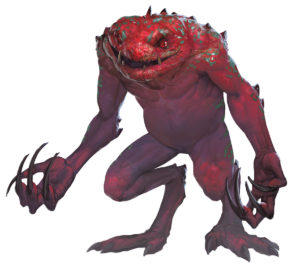 If you’re a DM looking to throw some aberrant and utterly alien creatures at your players, start with the ones listed here, and maybe even make an entire campaign with them. And be sure to have an NPC named Burke, you know, just to keep the party on edge.

Are you all hyped about Alien: Covenant? What is your favorite aberrant D&D monster? Tell us in the Comments!

All image credits: Wizards of the Coast