The post-credits scene from Loki episode 4, “The Nexus Event,” was one for the ages. (Pun fully intended.) We’re going to break down everything about this brief, but memorable moment, so if you haven’t seen it and want to avoid spoilers, please stop reading now. We’ll be here when you get back. And without further ado!

After “our” Loki is seemingly pruned from existence, we see he wakes up in a post-apocalyptic New York City. Looks like the TVA’s pruning on Loki isn’t death, so much as an exile into a dead timeline. And yes, we know it’s New York because that’s a shattered Avengers Tower in the background. Possibly a universe where Ultron won. But the real kicker is that we see four variant Lokis surrounding him. And two of them should look familiar to fans of the original Marvel Comics. Let’s break it all down. 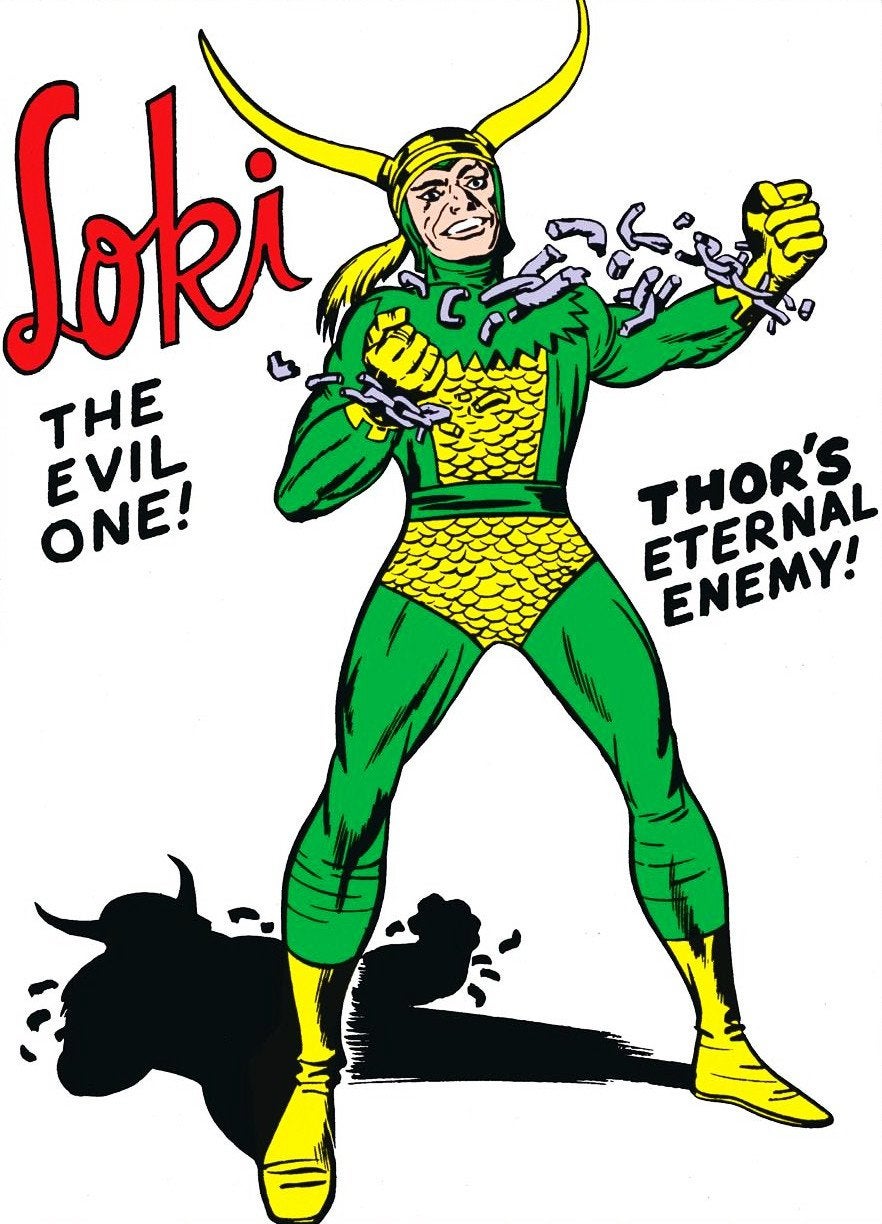 On the far right is Richard E. Grant, credited as “Classic Loki.” We see him wearing a version of Loki’s costume from the classic ’60s comics drawn by Jack Kirby. In fact, this outfit looks identical to the one he wore in his very first appearance in Journey Into Mystery #85. The suggestion here is that he’s the Loki from the 616 universe that is the main universe published in Marvel Comics. This would be the first time the comic book reality that inspired the MCU gets canonized on screen. Which is kind of an enormous deal, perfect for a post-credit reveal. 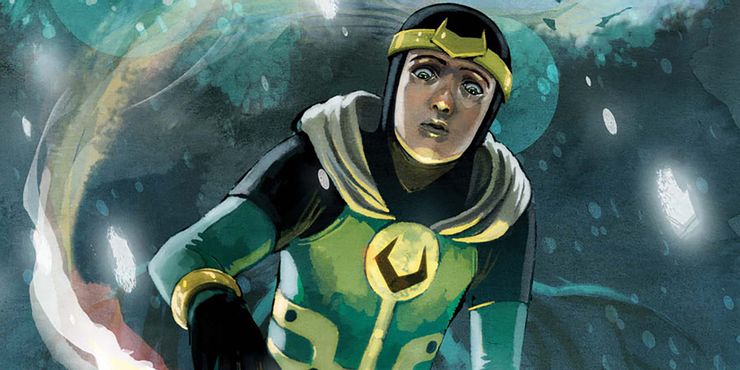 Squarely in the middle is Kid Loki, played by Jack Veal. This is a far more recent comic creation, starting in 2010’s Thor #617. Loki died while fighting alongside his brother Thor and the Avengers, in one of his rare moments of heroism. Prior to his death, Loki had manipulated Hela into removing his name out of the Book of Hel. Because of this, he was reborn as a much younger version of himself. This “Kid Loki” lived in Paris going by the name “Serrure,” which means Lock in French. He had no memories of his adult self’s life, and actually became heroic. He even was a member for a time of the Young Avengers. 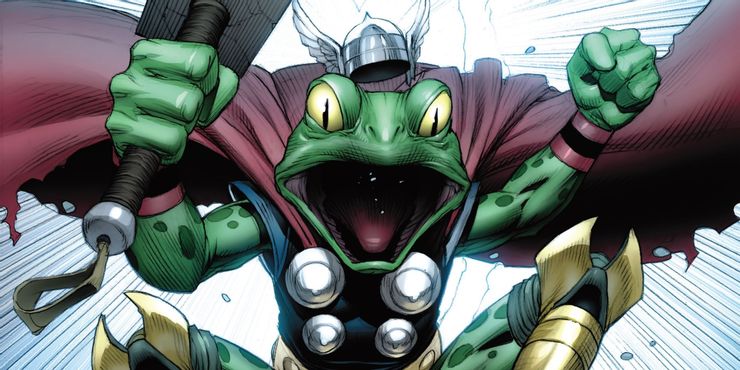 Kid Loki is holding what looks to be an alligator with Loki horns, which means this is yet another Loki variant. While that sounds extremely wacky, let us not forget that the Trickster God often transformed into animals. He famously became a female horse in actual Norse mythology. So perhaps there is simply a variant Loki who transformed into a croc for who knows why, and became eternally stuck there. Gator Loki is also a nod to the time in the comics when Thor became a frog, or “Throg,” as he is more famously known. 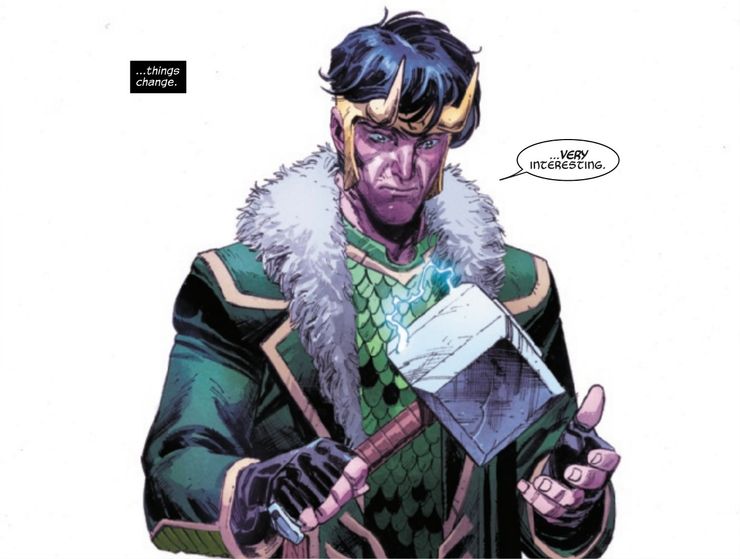 Finally, on the far left, we have actor Deobai Oparei. He’s listed as “Boastful Loki.” This character seems to be a variant who was worthy of picking up Thor’s hammer Mjolnir. Well, that would certainly be something to be boastful about, wouldn’t it? And it has a precedent in the comics. A recent one too. In 2020’s Thor #4, Mjolnir finds itself in Jotunheim, the realm of the Frost Giants, currently ruled by Loki. Departing his throne, Loki briefly lifts the hammer. Only for his brother Thor to snatch it away moments later. But it seems the version we see played by Oparei is a Loki who wielded Mjolnir much longer.

The Council of Lokis

Could this council of Lokis be the MCU’s version of “The Council of Reeds” (as in Reed Richards of the Fantastic Four?) The idea of multiple timeline versions of a single character in a group is an idea from Marvel writer Jonathan Hickman. And Kevin Feige has used many Hickman ideas in the MCU in the past. In the comics, the Council of Reeds (later spoofed as “the Council of Ricks” on Rick and Morty) has caused as much harm as good. We have a feeling the Lokis are more on the “harm” side. Or, at the very least, the “chaos” side. And what could be more chaotic than a new Multiverse formed by numerous Loki variants?

All we know is after that post-credit scene, it will be a long week before Loki episode five hits on Disney+.