It’s been a wild couple of weeks for fans of Thor. Not only did Taika Waititi announce that he would be taking on a fourth movie about our favorite Asgardian, but Marvel revealed that Natalie Portman would be returning as Jane Foster as well as taking on the mantle of Thor herself. This is a joyous announcement for all of those who loved the neon-madness of Thor: Ragnarok and who want to see more than one God of Thunder on their screens. And if we’re getting two Thors, why not three? This announcement got us thinking about another of our favorite versions of the Asgardian hero: Frog Thor!

Frog Thor has taken two major forms in Marvel Comics history. The first iteration of the character was introduced by Walt Simonson, Paul Beckton, and John Workman Jr. in Thor #364; here, the God of Thunder we know and love was transformed into a frog by Loki and trapped on our mortal realm as a slimy green pond-dweller. The story follows a fantastical path as Frog Thor has to battle and befriend multiple other cute creatures in an attempt to survive so he can return to his former glory. 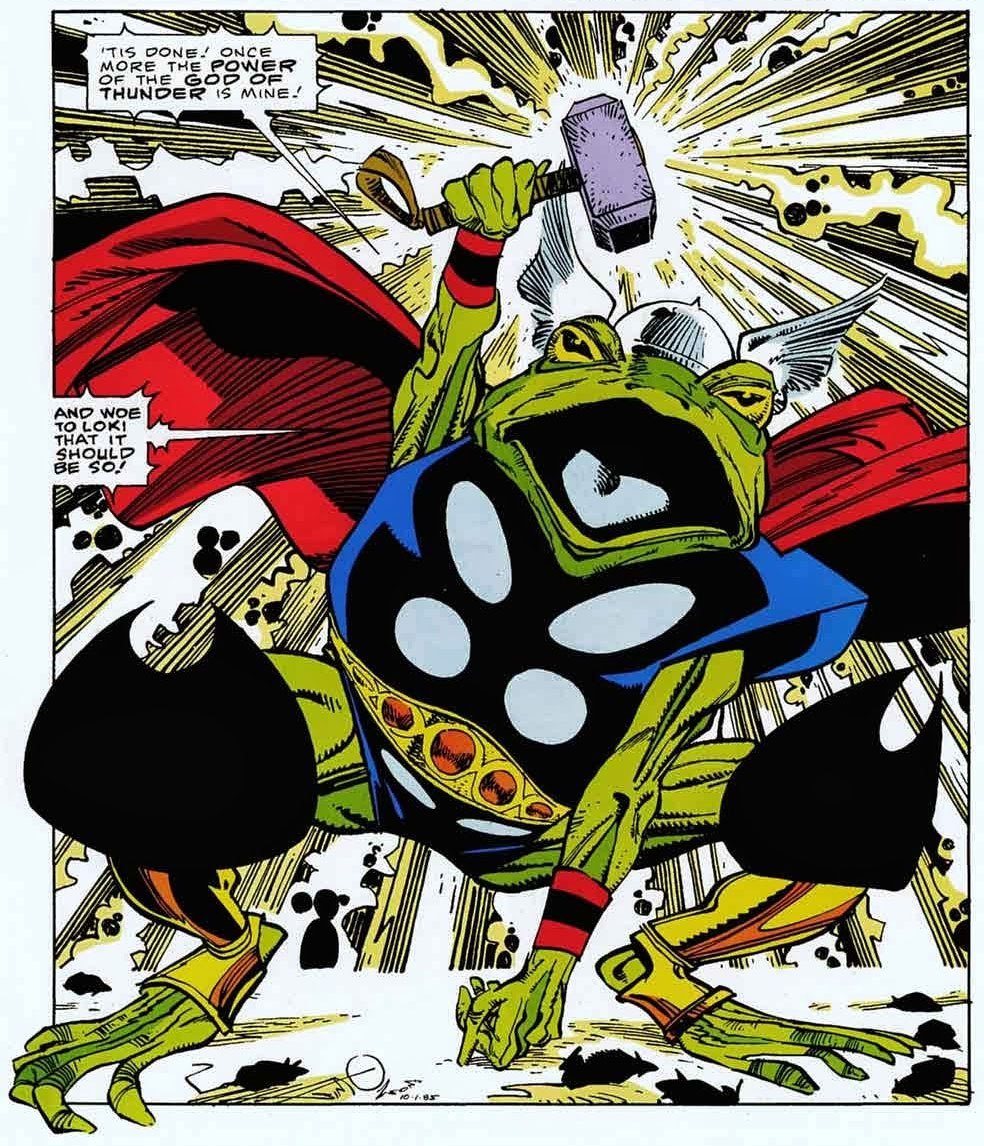 With Jane Foster taking on the mantle of Thor in the new movie there’s plenty of space to introduce this unexpected hero, especially as we still don’t know what Odinson will be up to. Five years ago, the idea of Chris Hemsworth’s serious, Shakespearean hero transforming into a frog would have seemed impossible. But in a world where Ragnarok exists and Thor regularly hangs around with a tree and a rabbit… we mean, raccoon… it actually doesn’t sound too crazy. We would love to see cute little Frog Thor running around with his little hammer, having to fight with some alligators and maybe even teaming-up with some cute critters. It would also explain why Jane is left in charge of Mjölnir without getting into the much deeper territory of the Unworthy Thor arc.

The second iteration of the amazing amphibian was a distinct character from Thor proper, and was somehow even crazier. Simon Walterson (named after Walt Simonson) was cursed by a witch whom he had asked to bring his dead wife back to life. When he couldn’t pay the witch for her services, she turned him into a frog. As soon as that fate befell him, he found himself in the middle of an epic battle which ended with him helping the real Thor. He gained his powers after finding a chip of Mjölnir and using it to defend himself. In the process, he was imbued with the power of the gods and became THROG!

We know that Waititi is a fan of creature work, with both Korg and Meek playing a large part in Ragnarok and even getting cameos in Endgame. So it doesn’t seem too farfetched that we might get to see a version of Frog Thor in Love and Thunder. It would make sense for Simon Walterson to turn up too as we know—via a perfectly placed joke in Ragnarok— that Loki has once turned Thor into a frog, which means he may well have crossed paths with the man who would become Throg.

Maybe it’s (very) wishful thinking, but we would love to see Frog Thor hit screens when the fourth Thor movie hits on November 5, 2021.