We love fan art here at Geek & Sundry. Our fans love to bring alive the vivid characters of our shows like Critical Role and, of course, Shield of Tomorrow with their artistic skills. It’s a great way to show love and polish skills. It could also help an artist become the next Jenny Parks.

If the name doesn’t sound familiar the art might be. She’s been painting pop culture cats for years, turning beloved characters into feline versions and selling prints at comic cons all around the world. Fans of The Avengers, X-Files, Doctor Who and dozens of other sci-fi and fantasy characters. She’s made it to C2E2, Wonder Con and San Diego Comic-Con to sell her fan art and last year, she struck gold. Or perhaps more correctly, gold-pressed latinum.

Parks released  Star Trek Cats, an official Star Trek book from Chronicle Books featuring recreations of moments from the Original Series recreated by her feline creations. In our coverage of the book, Parks told us they had some big things planned for spring of this year. Now we know what they were working on. 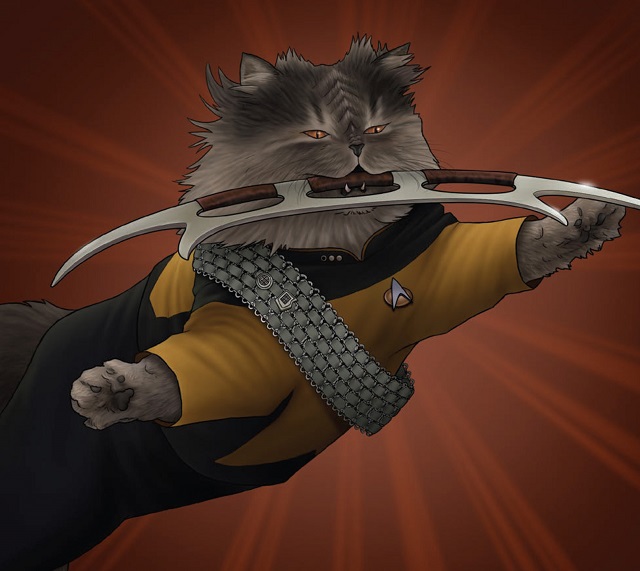 Star Trek: The Next Generation Cats continues the adorable action of the Star Trek Cats series. The original focused on Captain Kirk and his bold crew, while this release features Captain Picard and the crew of the NCC-1701-D. (Although, sharp-eyed cat fanciers will see a few returning guests from the first book in the scenes where the crews crossed over) This book features other alien cats as well, including Klingon cats, Borg cats and even Q as a terrifying omniscient cat!

Of the crew, our favorite is naturally the Wesley Crusher kitten, but fans who pick up this book can decide for themselves which of these cats deserves a good ear skritching after saving the galaxy. Star Trek: The Next Generation Cats is available online, at fine bookstores and in the pet shop next to 10 Forward starting this month.

What would the crew of the Sally Ride look like as cats? Tell us in the comments! And be sure to tune into our Star Trek RPG show,  Shield of Tomorrow on Geek & Sundry  Twitch and  Alpha every Friday starting at 4 PM PT, followed by our aftershow on Alpha, Behind The Shield, where the crew discusses the episode and Trek-dom topics like this one.