LITTLE NEMO Is a Gorgeous Kids’ Fantasy of Pure Terror

For years here at Nerdist, we’ve been obsessed with scary kids movies, i.e. movies made for children specifically that were and often are still absolutely terrifying. When we were kids, they were everywhere! It’s a wonder any of us got any sleep at all when we were younger, and it probably explains a lot about us as people. But since the beginning of these conversations, our own illustrious Editor-in-Chief Rachel Heine has been singing the petrifying praises of an animated movie called Little Nemo: Adventures in Slumberland, which I had at the time never even heard of. So, for Rachel and this year’s essays, I’ve finally watched it and hoooooooooly crap.

The story behind Little Nemo: Adventures in Slumberland is fascinating and long. The short version is, Japanese producer Yutaka Fujioka wanted to make a film version of Winsor McCay’s classic comic strip about a boy who goes on adventures in his dreams. He tried to convince McCay’s descendants to give him the rights in the late ’70s and approached George Lucas, fresh off the success of Star Wars, to produce, though Lucas didn’t see much room for growth for the Nemo character. Looney Tunes‘Â Chuck Jones turned the project down, Lucas collaborator Gary Kurtz was briefly a producer, and renowned author Ray Bradbury was among the people hired to write a screenplay. 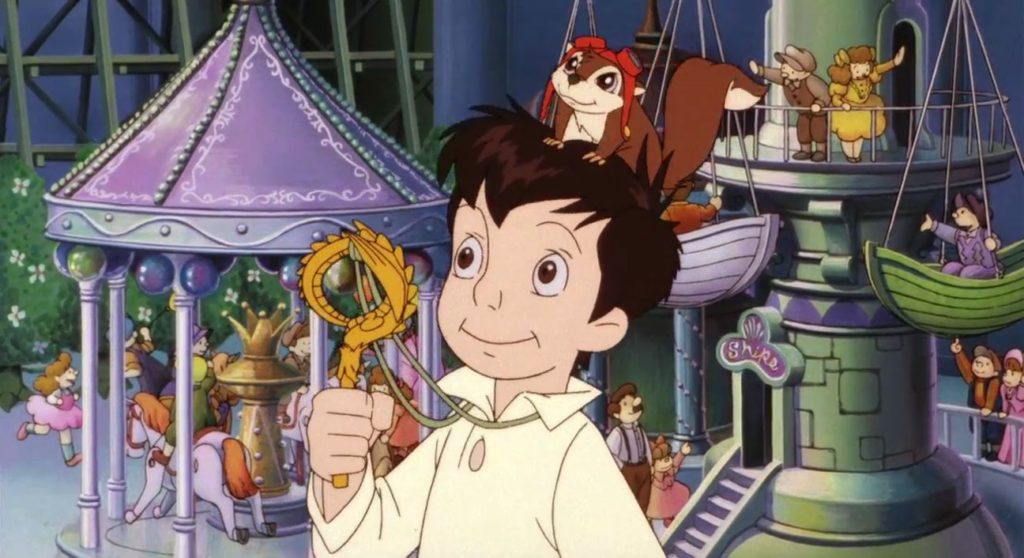 Fujioka also approached Studio Ghibli founders Hayao Miyazaki and Isao Takahata about making a Little Nemo film, but they both left the project, which Miyazaki later called the worst experience of his life. The project eventually became a Japanese/American co-production after several starts and stops over the next decade, with various people such as Brad Bird, Chris Columbus, French comic book artist Moebius, conceptual artist Brian Froud, and several Walt Disney Studios animators all taking a crack. Eventually, the movie would be co-directed by Masami Hata and William Hurtz, with production entirely taking place at Fujioka’s Tokyo Movie Shinsha studio, fresh off the success of 1988’s Akira. 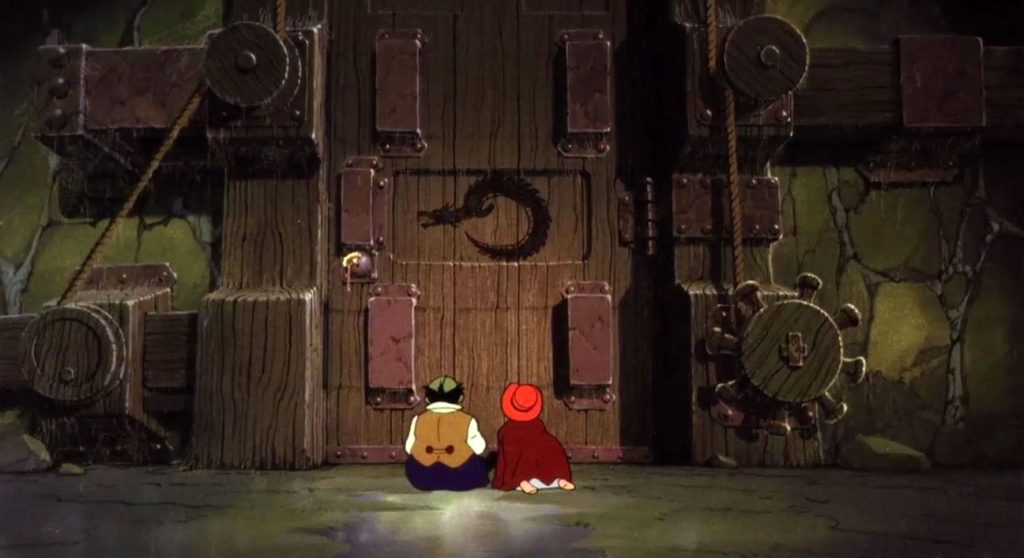 And that’s really the first thing to notice about Little Nemo, that despite the long and troubled history of the project, the finished product is stunningly beautiful, with some of the smoothest animation I’ve ever seen in a film of this kind. Makes perfect sense all the animators had just done Akira. And the Disney influence is certainly there, from the character designs down to the hiring of Academy Award-winning songwriters Richard and Robert Sherman, who wrote just about every song you remember from a classic Disney movie. via GIPHYLittle Nemo is a boy who never stops sleeping, it seems, and only wakes up to eat and play. Oh, to be a child in the early 1900s. His dreams are very vivid and the movie opens with an intense nightmare about him flying on his bed being chased by a screaming train engine. After seeing a circus parade in his town with his only friend, a flying squirrel named Icarus, Nemo retreats to sleep where he’s approached by Professor Genius to accompany him to Slumberland where the kindly, Santa Claus-looking King Morpheus wishes to make Nemo his heir (totally cutting out his daughter, the Princess… which she’s weirdly okay with).

Nemo, however, is not one for ceremony, and scampers off with a clownish vagabond named Flip who takes him to the doorway between Slumberland and Nightmareland. This is a bad move, and the Nightmare King sends a horrifying plague-goop to Morpheus’ castle to kidnap him. Using only the King’s scepter, and accompanied by Flip, Icarus, and some friendly goblins, Nemo must rescue not only the king, but the Princess, the professor, and all his new friends, too.So, you get it, typical kids movie stuff. A little boy goes on a magical adventure and is a bit selfish to begin with but eventually proves himself worthy and becomes a hero. It’s nice. Or it would be nice if not for all the utter terror you’re forced through while watching. 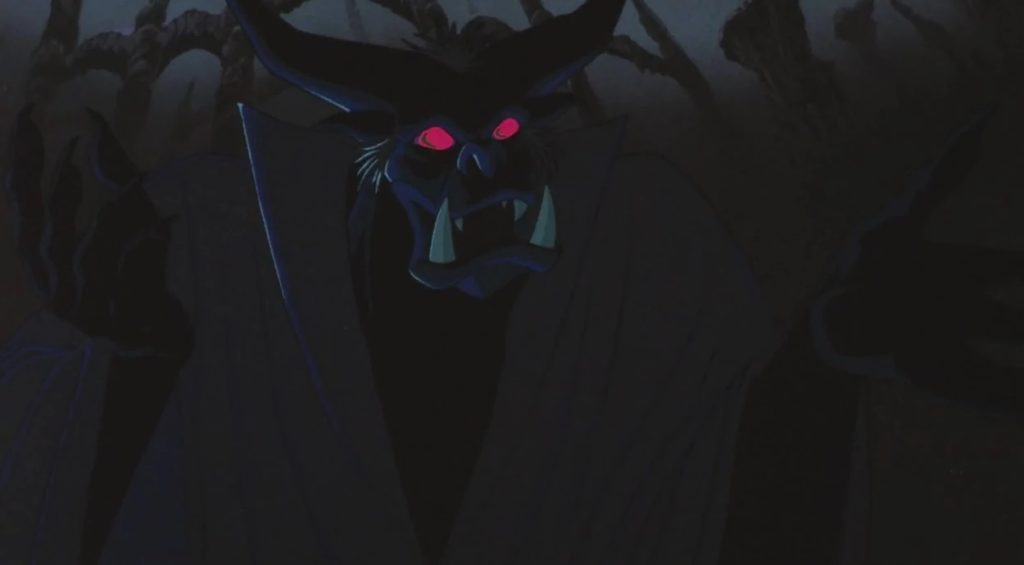 To say nothing of the intense train sequence that begins the movie, the Nightmare King definitely lives up to his name. Watching friendly characters engulfed in dark goop is rather upsetting, and the Nightmare King himself makes Fantasia‘s Chernabog seem approachable by comparison. He’s gigantic, and sarcastic, and has the ability to suck people into nothingness. I mean, it’s just not that cool man. 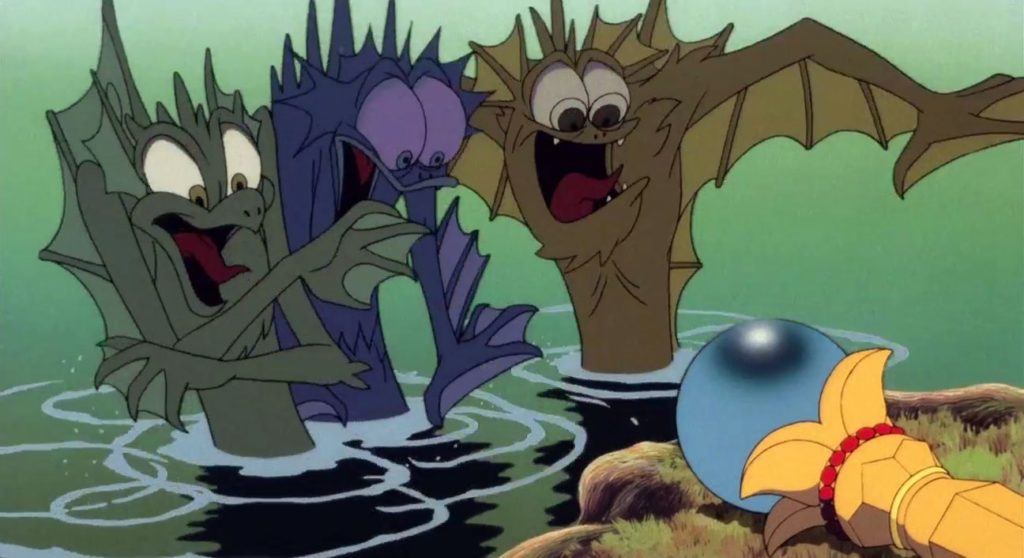 The designs for everything within Nightmareland are beautiful and macabre, and you can certainly see the conceptual work done by Moebius on the buildings and Froud on creatures. And this is all made more frightening because the animation is so good; the threat seems more real, the monsters more believable. If not for Nemo shouting a million words that rhyme with “pajama” as magic words to defeat the Nightmare King, the climactic sequence would be even scarier. 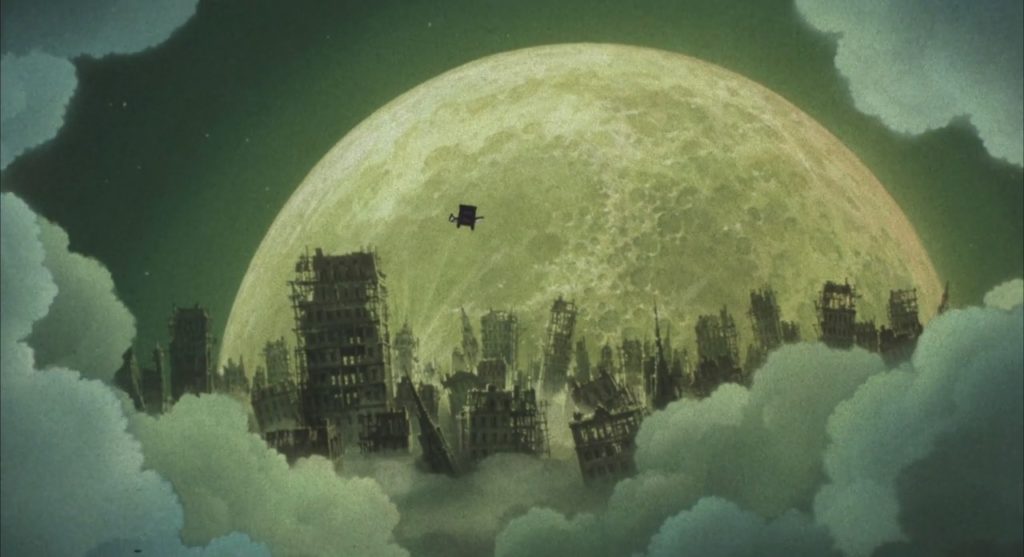 Little Nemo: Adventures in Slumberland was a big, enormous flop, never really finding an audience, as evidenced by the above VHS trailer which says “from the director of Home Alone” referring to screenwriter Chris Columbus, who didn’t even write the final version of the script. Truth be told, the story is nothing much to write home about, and people didn’t know what to do with this movie. But my heavens the visuals of this movie are beautiful, and it certainly made its way to a handful of children in the ’90s, including a young Rachel Heine who’s been terrified of the Nightmare King ever since. And I can see why.If you’d like to watch the movie, go ahead and do that below, in full HD, on YouTube, because the internet is amazing. It looks gorgeous, and then you too can be scared to go to sleep.