LAUGHTER Is a Strange and Moving Portrait of Survivor's Guilt - Nerdist

LAUGHTER Is a Strange and Moving Portrait of Survivor’s Guilt

Fantastic Fest has a reputation as one of the great genre film festivals in the world. It brings its patented brand of cult and schlock revelry year after year and debuts some of the most shocking, fascinating, and outlandish movies you’re likely to hear about. But they also program films that fit a different remit. Still offbeat and troubling, they lack the bombast of some of the wilder entries. Laughter out of Quebec is one of those movies that probably won’t get the cult buzz of others, but it offered a blend of grounded realism and David Lynch strangeness, with one of the best single performances you’re likely to see in 2020, or any year.

Writer-director Martin Laroche weaves a lot of disparate elements into Laughter. Though modern day, it uses some of the themes of WWII and Holocaust survivor stories and keeps those emotions thoroughly grounded. At the same time, there’s a dream (and sometimes nightmare) quality to the unfolding narrative that can backfoot the audience. But the prevailing achievement is the discussion of life and death, the humor, tragedy, and absurdity of existence in any form. 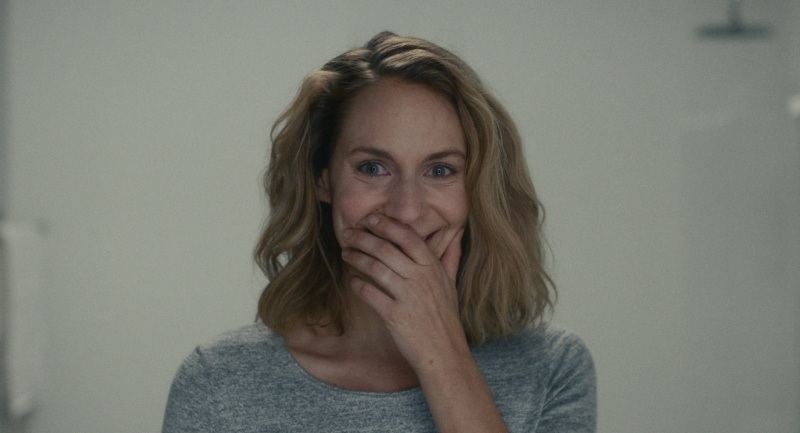 Laughter takes place in an alternate modern day Quebec in which a civil war tore the nation apart eight years back. In the present day, you wouldn’t know anything had ever happened. Valérie (Léane Labrèche-Dor) doesn’t have the luxury of forgetting; toward the end of the war, the opposing side’s secret police rounded up people for execution. These included Valérie and her boyfriend Samuel. After stripping them naked and forcing them to lie face down in a pit, the police executed them all… except Valérie. Somehow, the officer missed her. She lay in the pit, afraid to move, among the dead bodies. Eventually she had to claw her way out after the soldiers left.

This is all in the first 10 minutes of the movie. After that, we cut to eight years later, at which time Valérie is a caregiver in a hospice home. The war, for most, is a distant memory and Valérie makes friends with her patients, most notably Jeanne (Micheline Lanctôt). Valérie even has a new boyfriend, Gabriel (Alexandre Landry), who seems lovely. But try as she might, Valérie cannot escape the memories of the horrors she experienced. Not fully. 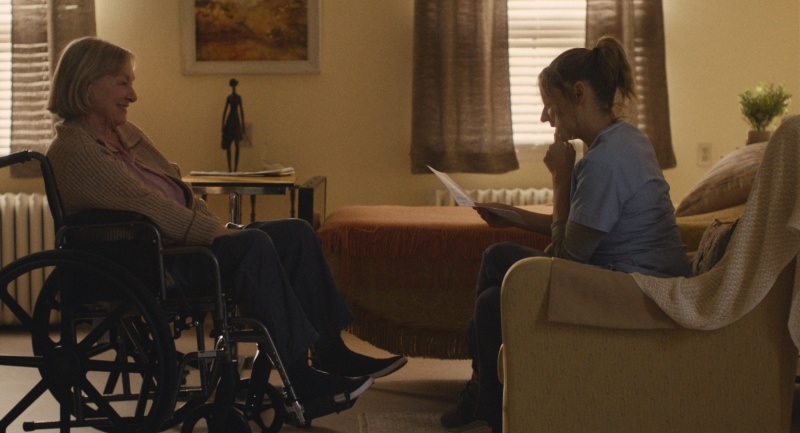 The past catches up to her in a very real way when she realizes the proprietor of the new bakery in her neighborhood is the same soldier who failed to shoot her all those years ago. But where some movies might turn this moment into the beginning of a thriller plot, Laroche comes at it from a purely human angle. The war is over, but the guilt remains. Guilt from those who survived, be they victim or perpetrator. The confrontation scene between Valérie and the baker is one of the most astounding and emotionally raw pieces of acting you’ll see in a movie. I was legitimately on the edge of my seat at home.

And that’s just one of at least five scenes of absolute acting superiority from Labrèche-Dor. Laroche leaves the camera on her for some lengthy speeches and she absolutely tears your heart out. Though the movie also gives us longueurs with Lanctôt and a few other characters, all of whom give great performances, it’s when Labrèche-Dor that the movie sings, with teary smiles and deep humanity. It’s very telling that Valérie feels the most at home, the most alive, when she’s around people so close to death.

Laughter goes a bit Lynchian at times, and those scenes are interesting and definitely work back to the theme. But for me, the reason the movie works is not the odder aspects but the fully real human drama at the center. Life is funny, and so is death, and never more so than for people who have to live on in the face of it. Track this movie down any way you can.