Keep Your Vowels of Heroism With SPELL SMASHERS - Nerdist

Keep Your Vowels of Heroism With SPELL SMASHERS

I have a weird confession to make as a professional nerd who writes about games for a living; I am terrible at spelling games. Give me a pile of letters and I stare at them for what seems like hours until I come up with the most basic two-letter words while my friends always seem to be gifted a memory to rival those who write for Merriam-Webster. Despite this weakness, I was very excited to get my hands on  Spell Smashers published by Renegade Game Studios from designer Christopher Chung and artist Mihajlo Dimitrievski. Spell Smashers  combines a spelling game with a light dungeon crawl theme. With +1 thesaurus in hand, I took Spell Smashers to a local board game night event and gave it a shot.

The game is easy enough to learn – Becca shows us the ins and outs of the game in her How To Play video:

The central mechanism of the game (and the first of three phases in each of seven turns) is building words to use as weapons against monsters. There are three sources for letters: The first are the consonant and vowel decks from which everyone draws the majority of their hand. Each letter does a point or two of damage depending on its rarity and one of three types of damage that, based on monster resistances or vulnerabilities, can do more or less damage to a monster.  The second are the monsters themselves. When a player kills a monster, they claim it as a trophy and can use the monster’s first letter as a permanent letter in the rest of the game. The stingiest source of letters are wound cards, which players pick up after they’ve attacked a monster in a round. Wound cards have a tricky combination of letters on each card and need to be played sooner rather than later. Too many wounds in hand can force a player to rest between rounds or lose victory points at the end of the game.

Monsters are made up of three components. The money piled on each monster represent its hit points. The monster tile features the creature’s basic stats of how much money its worth, how much damage it does back to an attacking player and what sort of letter and attack combo it provides when used as a trophy letter. A large modifier card is tucked under the tile to modify the monster. A Gargantuan Alicorn is worth 10 more gold and resistant to fire, for example, while a Malicious Alicorn is worth 9 more gold but does an extra wound card in damage. The combination of Dmitrivic’s fairy-tale art and the game’s wondrous adjectives elicited giggles of glee from the English degree holders at the table.

Those same English majors were the ones usually battling to go first based on the length of their assembled word. Anyone who removed the final coin from a creature claimed it as a trophy, offering a little bit of strategic choice who battle: Use a big word to claim all the coins on a creature even if a letter or two of damage is overkill, or fully apply a word’s damage to a creature that could take it but run the risk of another player swooping in to finish the job after? 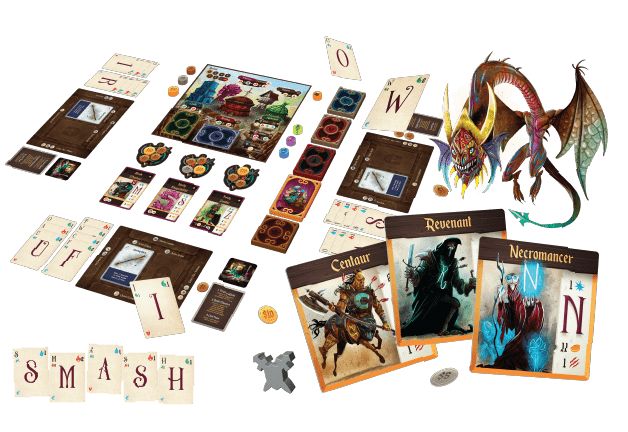 Most rounds end in the same place most dungeon crawls do: the town. There, players can take one of five different actions to improve their character. The Shaman heals wounds, the Guild gives players achievement cards to try and unlock for VP by killing monsters under a very specific condition, the Armory gives players a chance to score weapons and armor that provides specific strategies in the dungeon, the Tavern lets players get victory points for wounds by bragging about their scars for ale tokens and the Alchemist sells potions that allows players to manipulate their hand of cards in the dungeon. After 7 rounds, whoever has the most victory points wins the game.

Spell Smashers performed wonderfully as a lightly fantasy themed spelling game. It’s a great light game for a night of board games or something to break out for the Dungeons & Dragons group to play when the cleric is running late. It also comes with a solo mode that turns the game into something of a tower defense game as the player must keep the monsters from wrecking the town. Fans of Paperback will find a lot to love here while Munchkin players will probably giggle at the monster combinations that hit the table. I enjoyed the game even though my personal losing streak continues in these games. Anybody out there know how to remove a persistent curse of spellcheck?

You can watch a playthrough of the game on this episode of Game the Game:

Learn more about  Spell Smashers on the  Renegade Games site, and eloquently request it at any reputable game store.