Kami Garcia has “always erred on the dark side.” As such, for the author of the New York Times Bestselling DC YA graphic novel Teen Titans: Raven, it wasn’t tough to turn her talents to the dark and gritty true crime tone of her new DC Black Label title Joker/Harley: Criminal Sanity. The series centers on a reimagined version of Harley Quinn, who isn’t the anti-heroine that we know but is a skilled forensic profiler hunting down a famed serial killer who just so happens to be the Joker.

Though the series seems to be a world away from YA smash hit that saw Garcia debut as a comics writer, it was a story she had wanted to tell for a long time. “I’ve always been interested in writing an adult serial killer thriller,” Garcia told Nerdist. “So, the idea of doing this for me wasn’t daunting in terms of the subject matter, like going dark. What was really daunting, obviously, was taking on such an iconic DC character, of whom I’m also such a huge fan.” 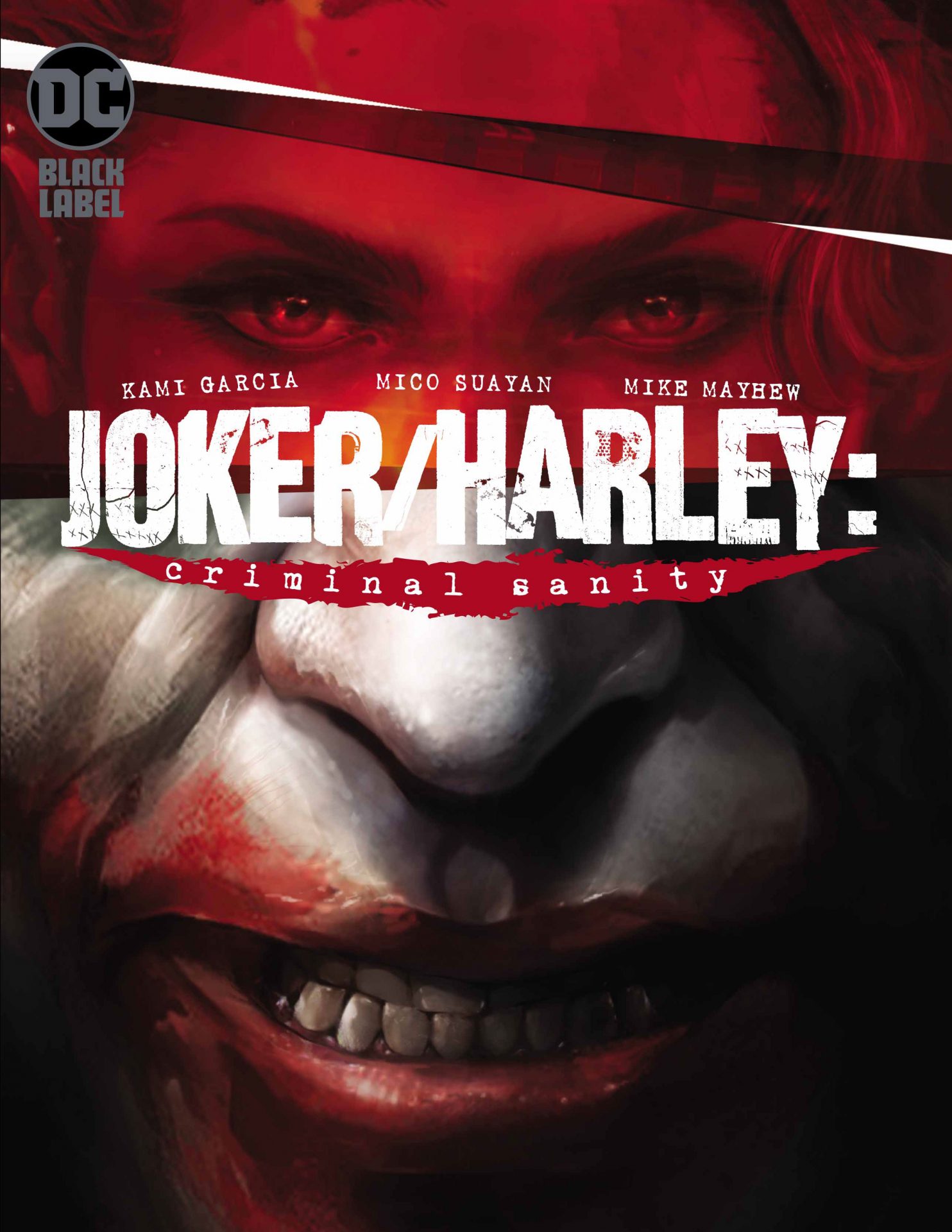 Ironically, the book began life as a young adult follow up to the Teen Titans series.”Originally, the idea started with Joker. I wanted to write a YA OGN about the evolution of a psychopathic killer. And after I wrote up the pitch I realized that it was going to be too dark for it work as a YA novel, at least much darker than I would be comfortable giving to my readers, especially coming off of something like Raven. Because after being a teacher for 17 years, I really do believe that when you’ve captured the attention of a teen reader, they’re going to be picking up your next thing.”

Garcia consulted her friend Dr. Ed Kurtz, a forensic psychiatrist and behavioral analyst and “a comics buff,” on the question: “If this kid were to grow up, we know, obviously, he will be the Joker, but what kind of killer in the real sense of forensic psychiatry? What type of killer would he be if we were profiling him?”

Garcia continued, “Which was a learning experience for me… [Ed] was the one who was really doing the profiling. After that, I really started thinking that if I wanted to write a serial killer thriller, and a mature serial killer thriller, then who better to write about than the Joker? Because he is literally one of the most complex and interesting and terrifying killers on the page or the screen.” 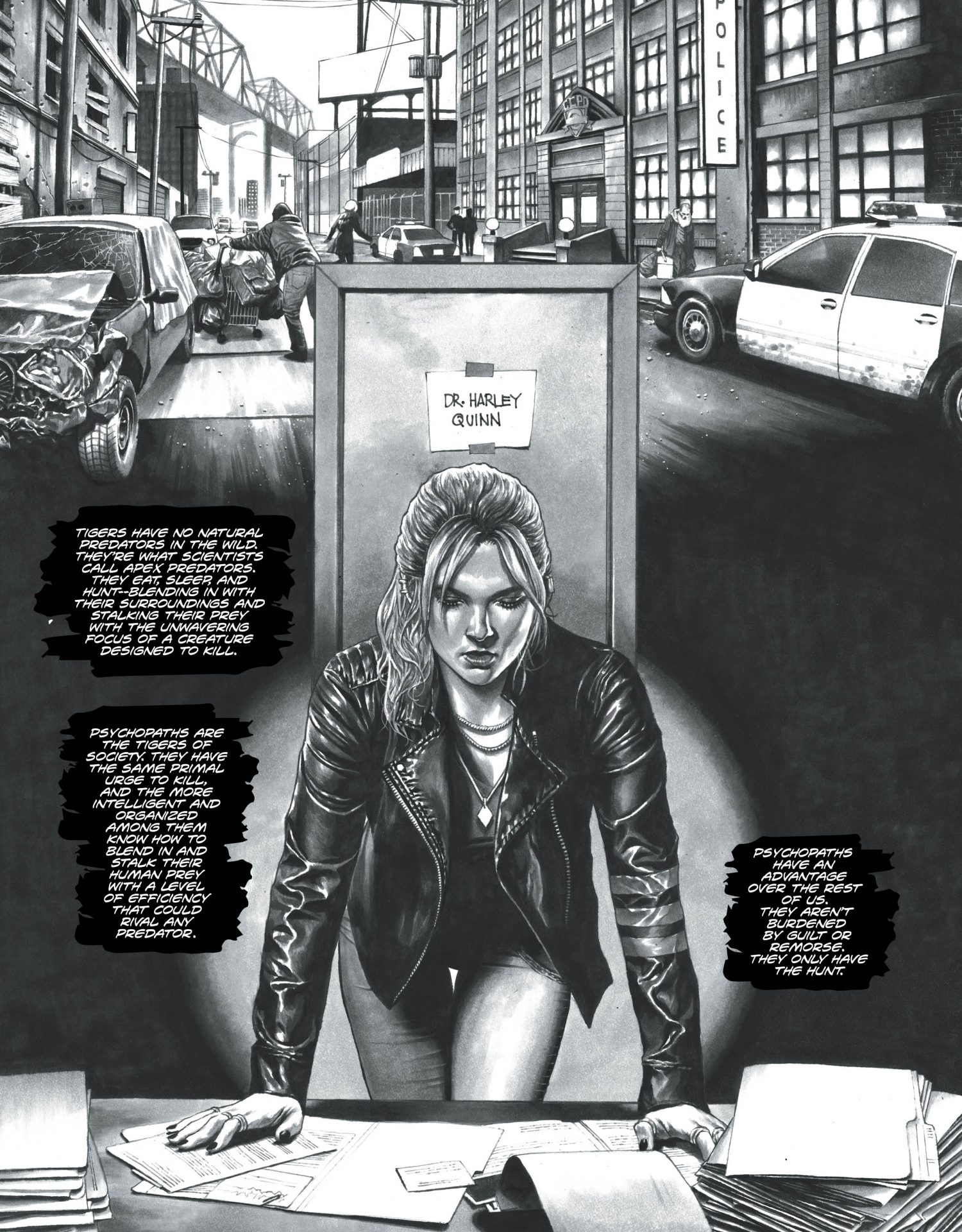 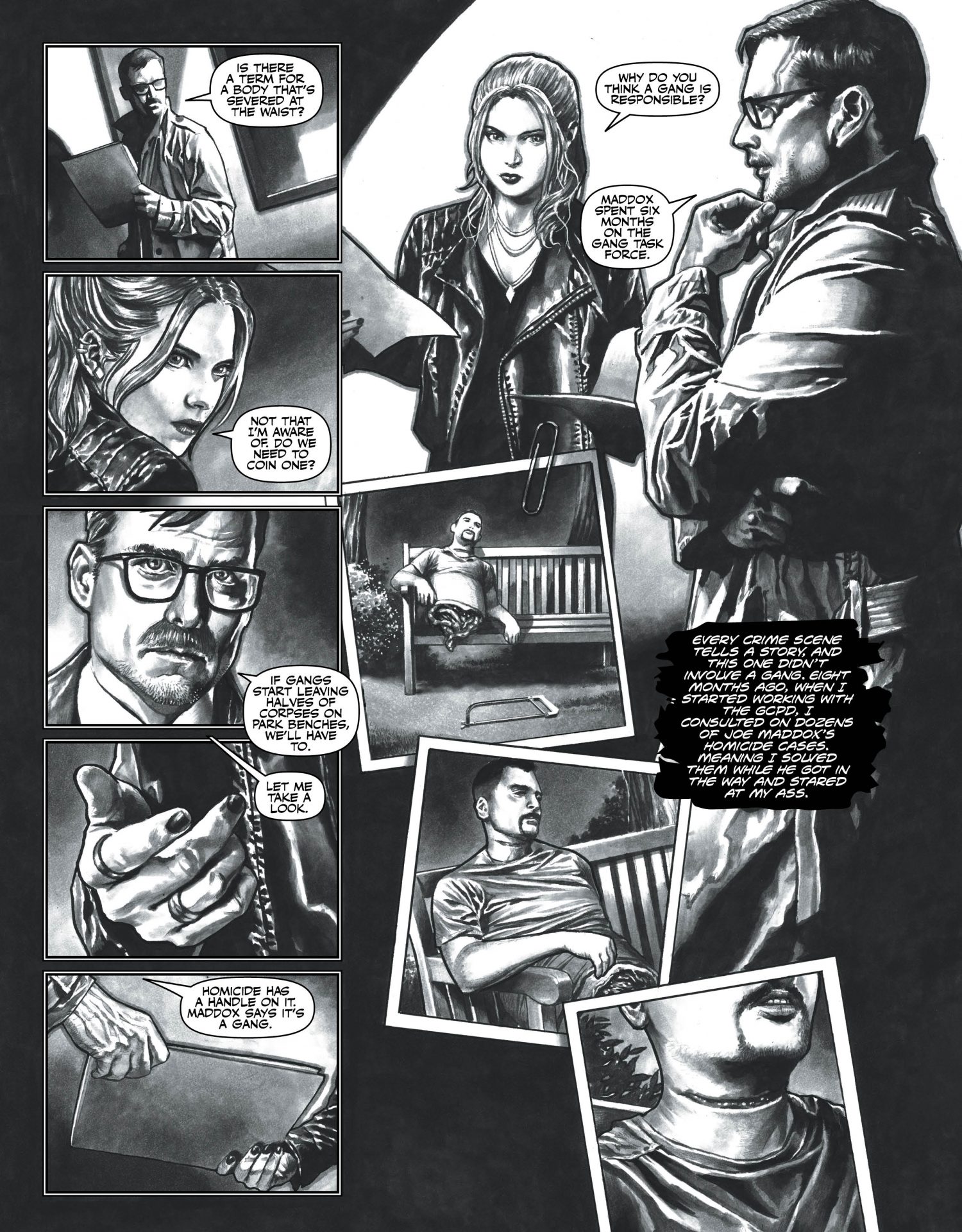 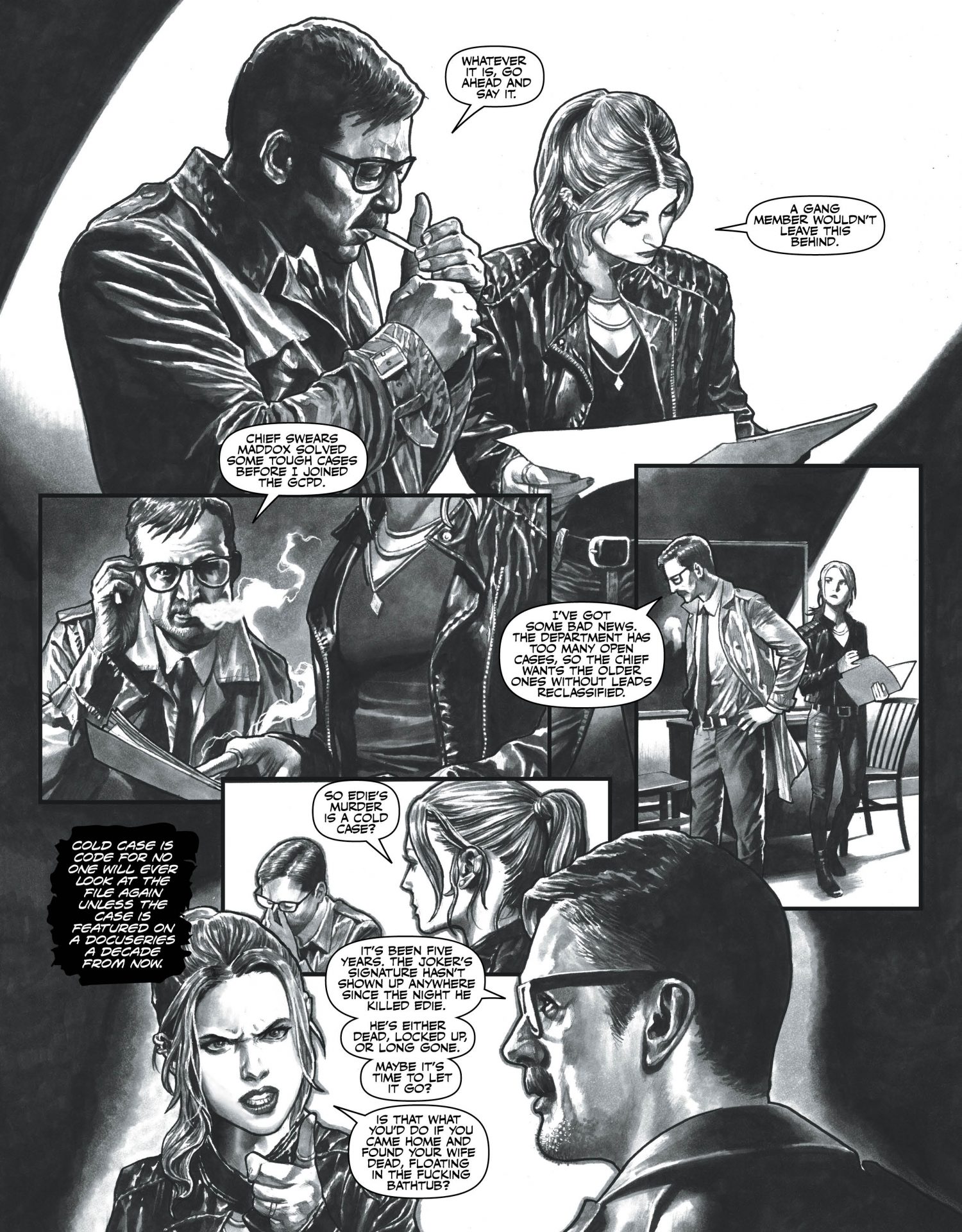 From the outset, the thing that was most important to Garcia was the authenticity of the story. “One thing I knew right off was that if I did this, I would wanted it to feel very real,” she said. “Not that I wanted to change the Joker, but I wanted to try to translate him to reality. I wanted him to really feel like a real serial killer. And not some sort of mashup of existing serial killers that we know of; I wanted to actually look at, you know, who would the Joker be as a serial killer?”

Garcia added, “Ed was very interested in that as well, because that’s what he does for a living. So he was more interested in the forensically accurate version. We went back and forth, and I would send him ideas and talk to him about whether or not this would work. Is this forensically accurate? Was this a match for that profile? And it eventually sort of evolved into a story about how a regular boy, a normal person becomes a psychopathic killer.”

Speaking of just how powerful Harley is in this iteration, Garcia was quick to explain that there are no superpowers in the classical sense in Joker/Harley: Criminal Sanity. “I don’t really call it a power; I call it a skill, if anything,” she said. “You are taking information and then you have the ability to analyze and synthesize it. A lot of it, in my opinion, is an instinct. So, I do think of it more like a gift, like she has this knack for it, but there’s definitely no quote-unquote power element where there’s anything other than like, having this real gift of intuition and experience.” 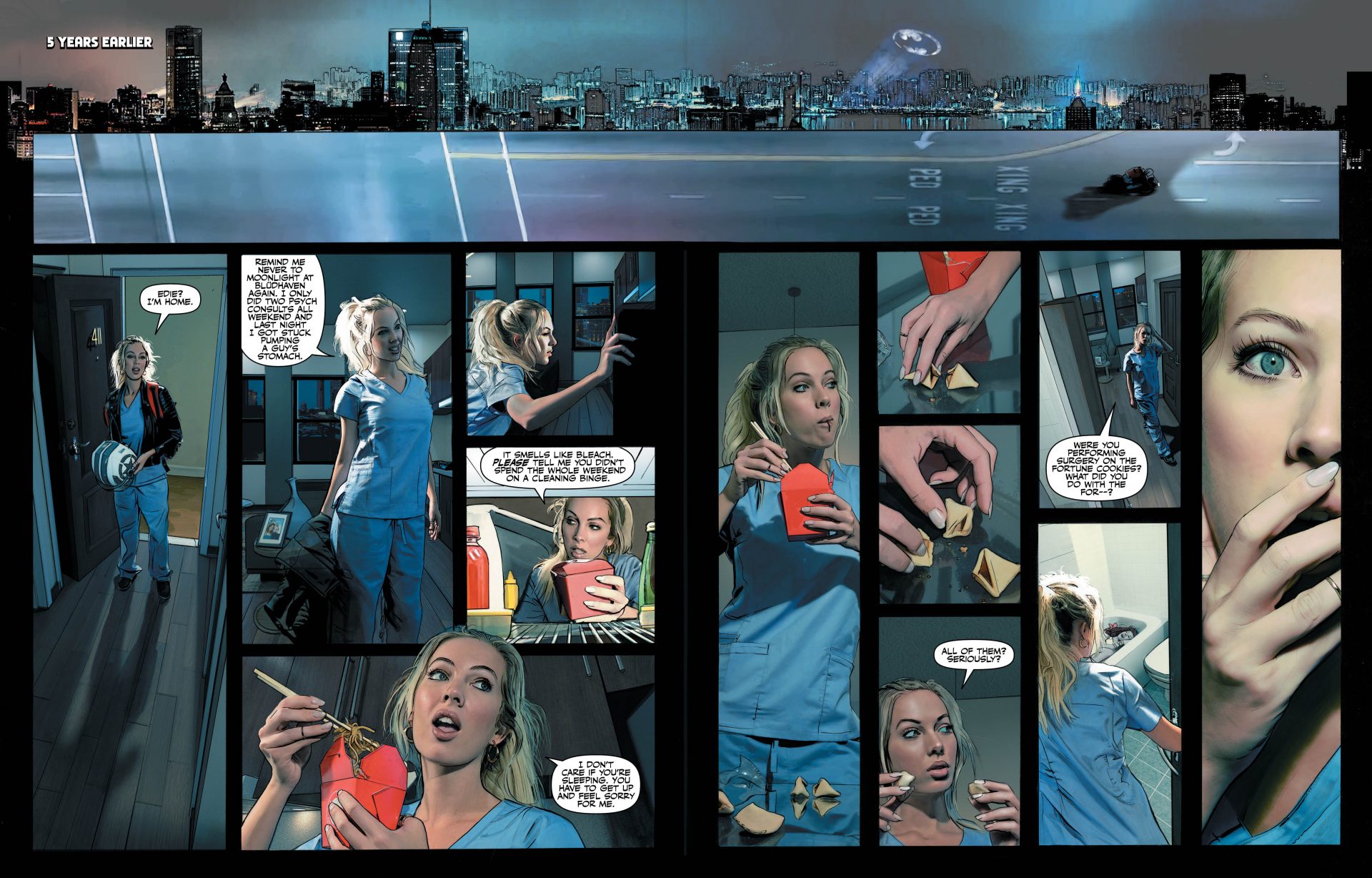 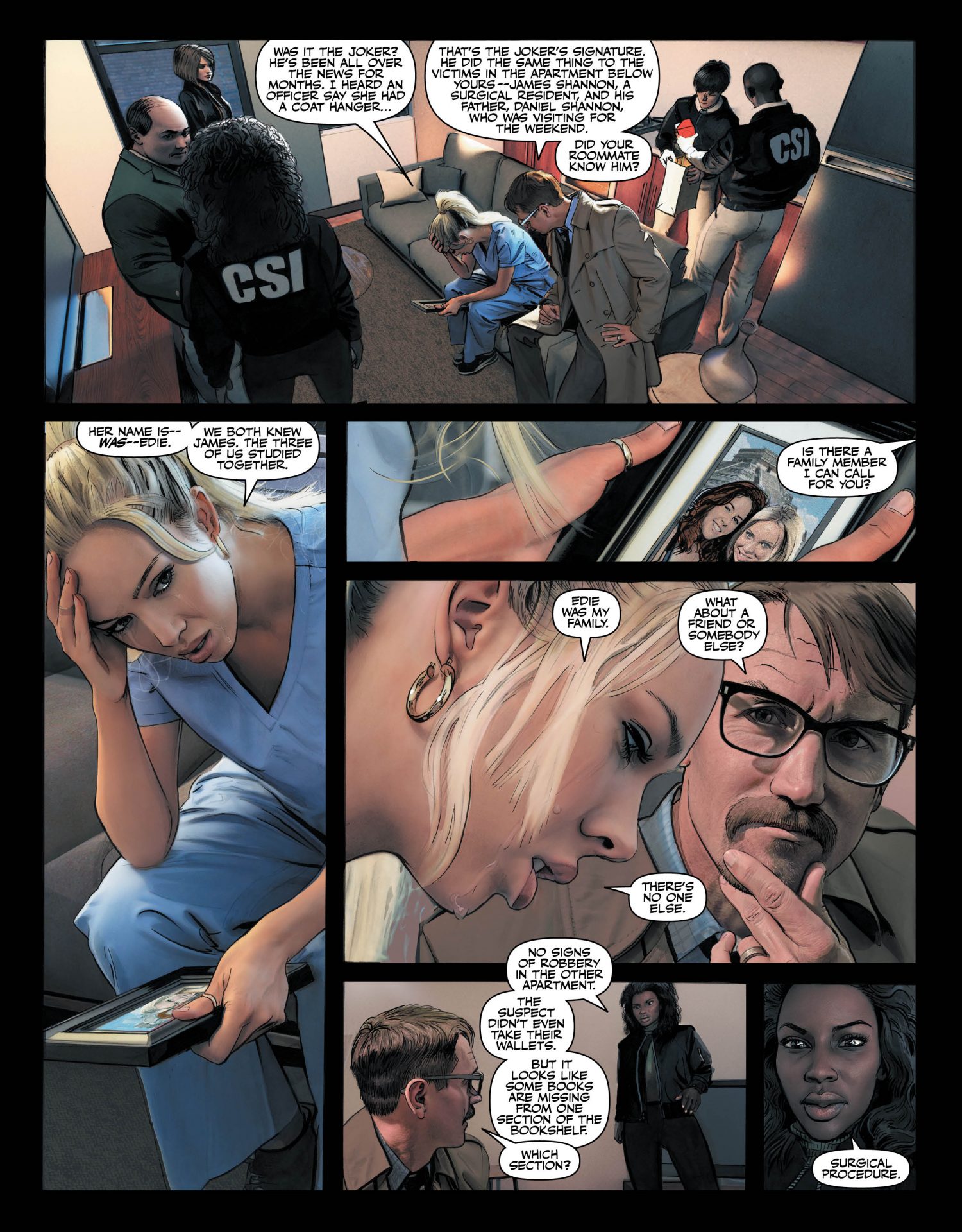 There has been a spate of Harley and Joker retellings of late, with titles like Harley Quinn: Breaking Glass, and Black Label’s own current mini-series Harleen. So what drew Garcia to the duo for her true crime, serial killer story? “Obviously, the Joker needs someone very formidable to try to catch him. I didn’t want to use Batman, mostly because I was really interested in the idea of a woman and I love Harley. The dynamic between the two is so well established. I’ve loved her since the original animated series.”

Of course, Garcia was conscious of the delicate nature of Harley’s relationship with the Joker. “But, you know, as time has gone on, there are some iterations of her and the Joker where the relationship is more toxic. As someone who has experienced relationship abuse, I don’t think that’s romantic at all. I don’t romanticize it. I don’t feel like there’s any real value in doing that. For me, what my takeaway from that is that I have met a lot of women who really relate to her because she experienced that and they experienced something similar. They are survivors. They were able to walk away from that, to rebuild their confidence, to become stronger and to decide who they want to be, to not let that experience define them. And that, to me, is really powerful.”

As for what fans can expect when it comes to the relationship between the controversial characters, Garcia said, “It’s not going to have a Hannibal dynamic, where they become friends, and they fall in love. There’s not going to be any mentoring. But there are going to eventually interact, and there will definitely be a cat-and-mouse feel to it. I also wanted to stay very far away from the Clarice Starling formula, because even though she’s young, she is not naive at all. She’s at the top of her game, she’s not a trainee being sent in to go after the most dangerous serial killer; she is really the best that they have. So I wanted her to be his match, not someone that he could manipulate.”

Garcia continued, “There are deeper layers to what’s going on with Harley’s story that hasn’t come out yet. But yes, they will interact. And there will definitely be a psychological side going on. But I just don’t want readers to think that it’s going to end up following some Silence of the Lambs formula where he helps her solve crimes or he kind of sneaks into her life kind of thing. This is ultimately the story of a person hunting a smart and manipulative killer.”