With his gorgeous work on titles like Sunstone, Switch, and Justice League Odyssey, Stjepan Sejic has established himself as one of the most singular creators working in comics. His newest project is a DC Black Label miniseries, Harleen, which follows the iconic anti-hero, Harley Quinn. The first issue hits shelves on September 25, and we sat down with the writer/artist to talk about his vision for the fan favorite character. We got to the bottom of why, at its heart, Harley and the Joker’s romance is actually a twisted play on Beauty and the Beast. 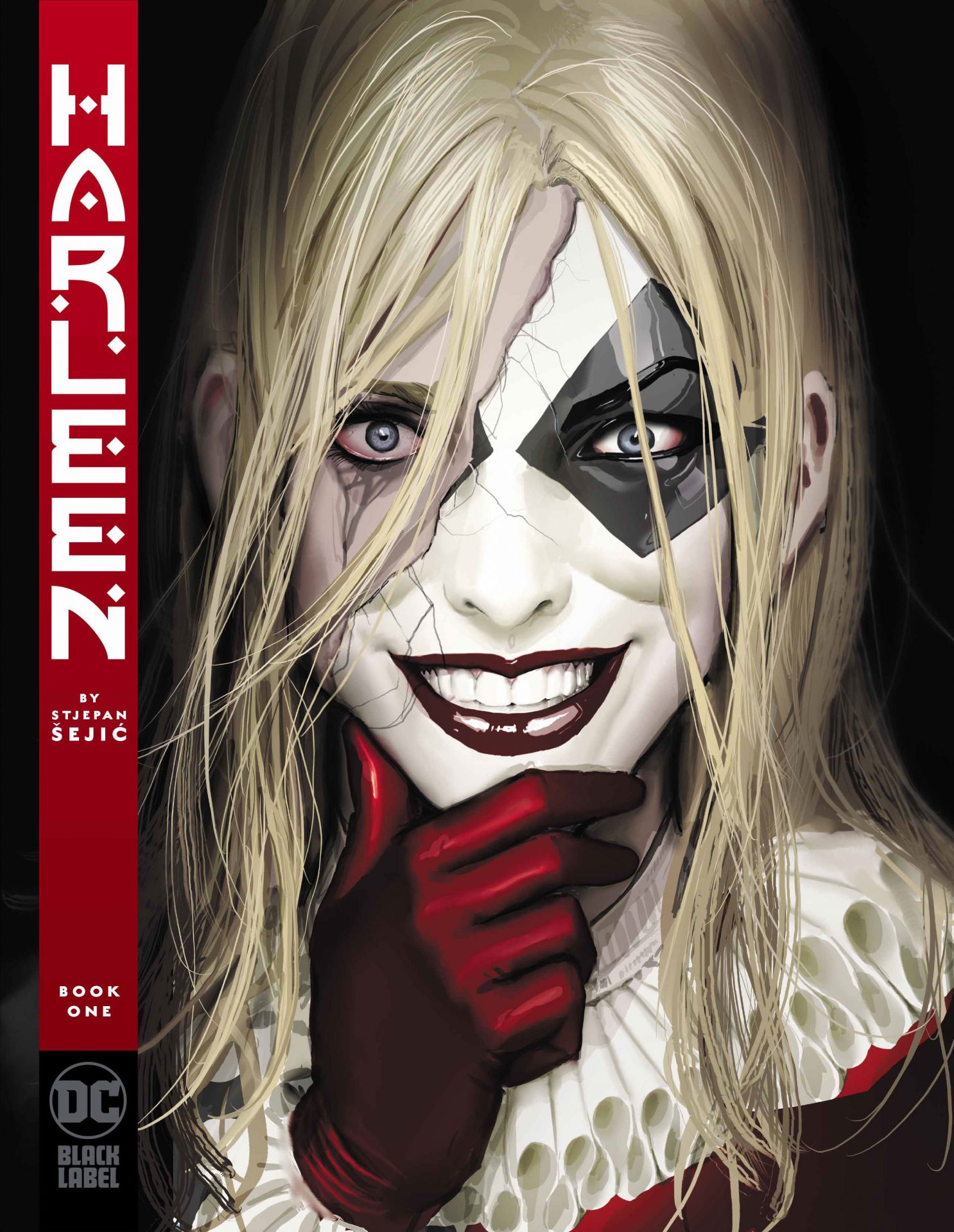 NERDIST: After your work exploring subversive romantic relationships in Sunstone, Harleen seems like such a perfect fit. Could you tell us how it came about?

Stjepan Sejic: Harleen initially started in the way that all of my books start: as a series of character explorations. I do these small short strips and images in which I kind of try to encapsulate what a character is really about because, for me, that’s the core of everything. The two main pillars of any story are the story narrative and the characters. As I said, Harleen started off as a series of explorations, which over time took shape and they became an idea of a story; I wanted to tell this life story of Harley Quinn.

And once I’d that figured out, I decided to write a pitch. So I contacted my editor at the time, Andy Khouri, and asked him what the process of pitching something like this would be. I showed it to him and he was impressed and interested in it and we took it from there. And here we are.

NERDIST: The first issue does a great job of building Harley as a character in her own right before she meets the Joker properly. How important was that to you when it came to this book?

Stjepan Sejic: The concept for Harleen was always kind of a three-act structure and each act consists of three issues like the story that’s solicited right now. The first one would be Arkham, the second one would be her and Joker, and the third one would be her splitting away from Joker with the help of her new friend, Poison Ivy. All of these arcs are intertwined, but at any given point, each arc on its own by itself would feel like a complete, perfect ending to a story.

Harleen is a story about the birth of a villain. It’s a story about somebody who wanted to do good but in the end made bad decisions and fell from grace. It’s a story about Gotham in a way it’s a story about how the city itself has this sort of a vibe about it that kind of creates monsters. That’s one of the big concepts in this story is that there’s a sort of insanity in Gotham. It’s not paranormal or anything like that. People just seem very prone to it. It’s why Arkham Asylum is such a very Gotham thing. So the story of Harleen is very much a story about a villain. I make no excuses about her, but at the same time neither do I ask for the readers to relate to her. But if I do my job right, the readers will feel invested in her story. 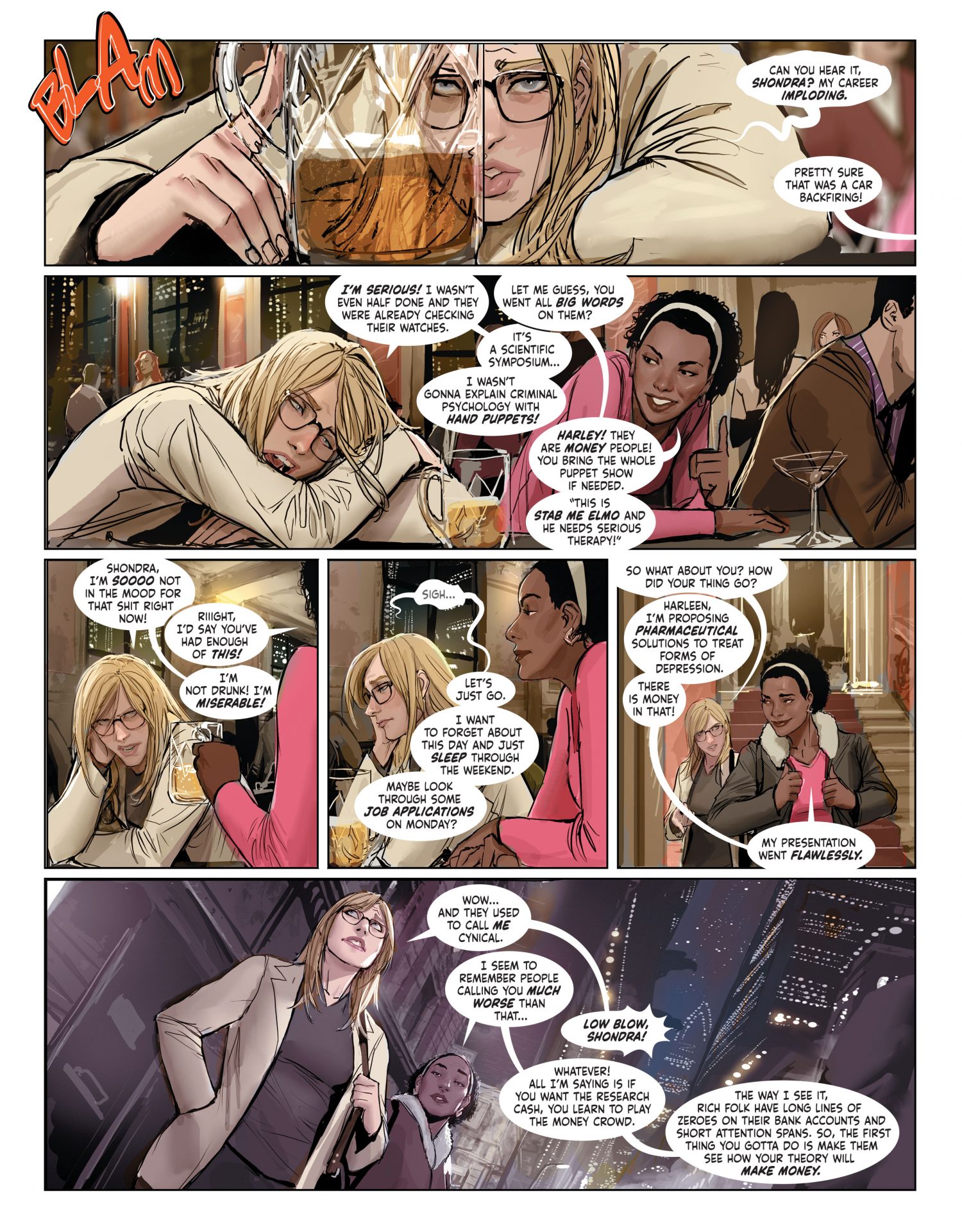 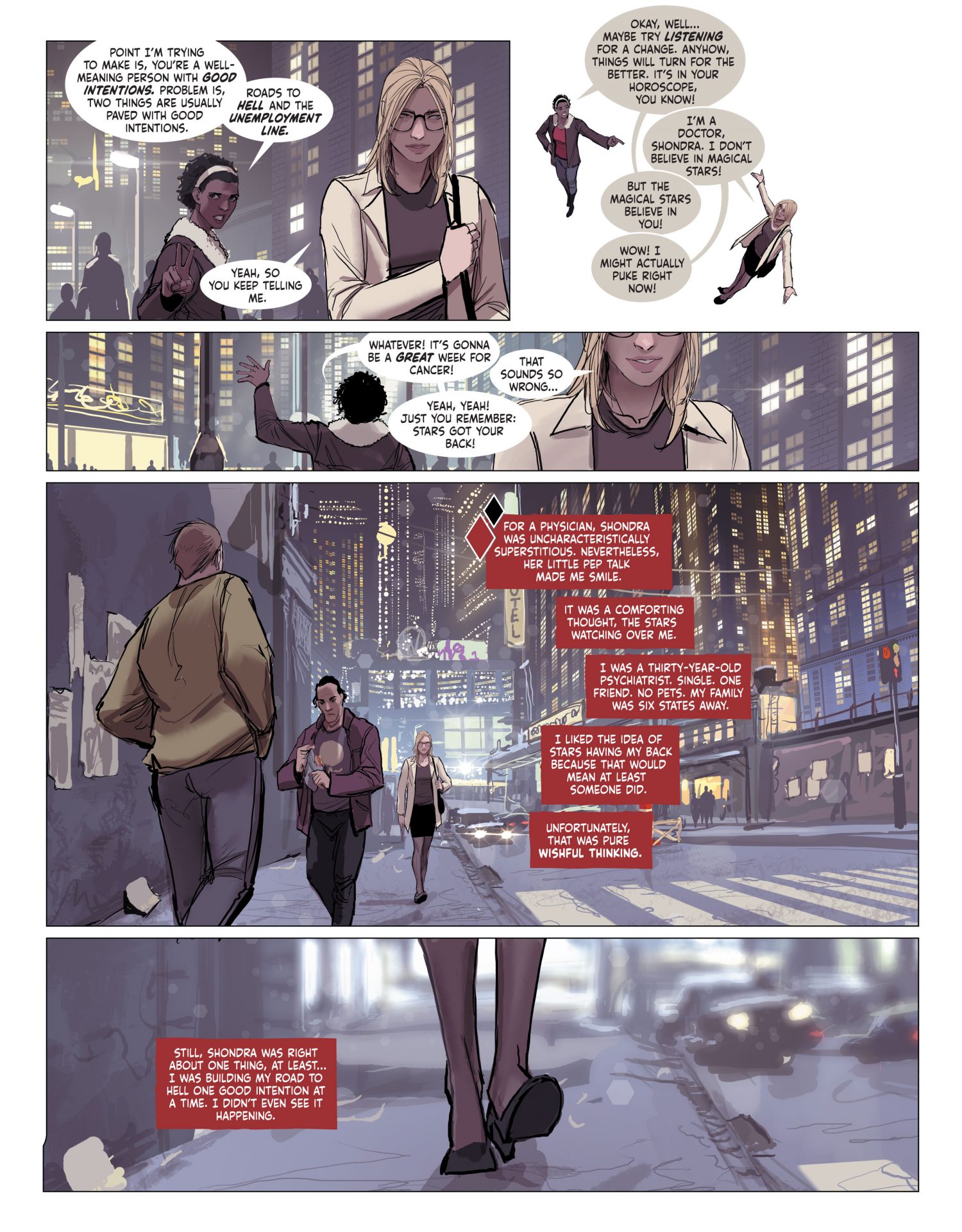 NERDIST: Something that comes through in the first issue is that although we’re seeing Harley fall for the Joker, she’s aware of the abusive nature of the relationship. Could you talk a little more about how that relationship is explored throughout the series?

When you start reading it, and for a while, it’s gonna seem like “Oh, maybe, she may actually save him.” We believe that she believes that she can save him, that she can help him, that she alone can restore his humanity. But the problem is that as readers we’re also going to be privy to other information through the story. And we will see the darker side of it all. At the end of it all, the story of Harley and Joker is essentially a story of Beauty and the Beast.

NERDIST: You mentioned your process of doing sketches and character explorations before crafting a story, but what was it about Harley that made you decide this was a story you wanted to tell?

Stjepan Sejic: It’s that clear, almost body horror concept of somebody who’s able to understand that what they’re doing is wrong—that’s irrevocably evil—but they keep making excuses because they have an addictive nature. Make no mistake: the relationship that Harley has with the Joker is codependent and it’s addictive.

There’s sanity in her, she understands, she has the knowledge in her mind, she still has that psychiatrist mentality, except somebody else is at the wheel, you know? She can comprehend it. There’s this terrifying nature to that, you know, doing horrible things in your life. You know what it is, but you keep finding new ways and new excuses to justify yourself to yourself. That’s scary, that’s powerful stuff. 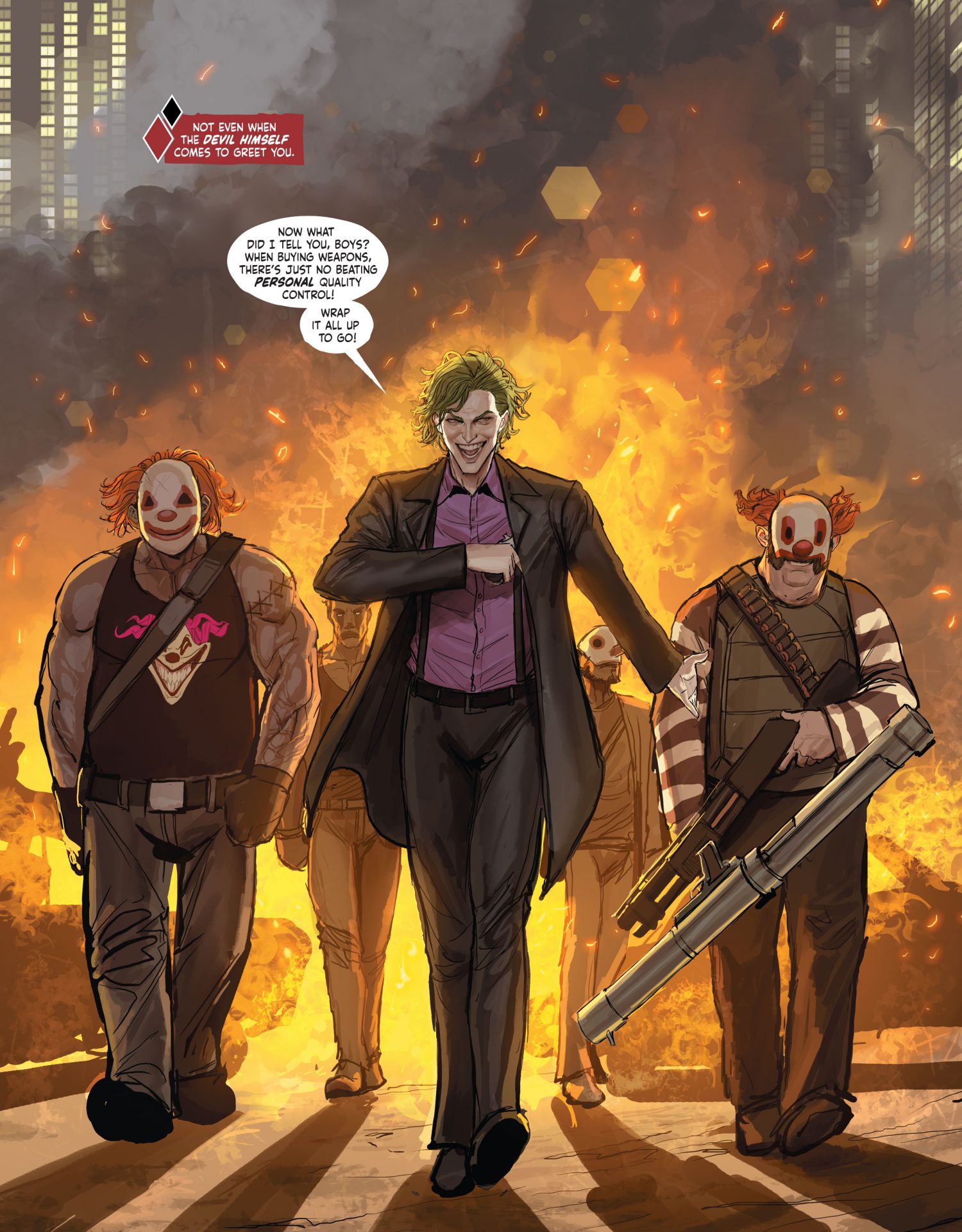 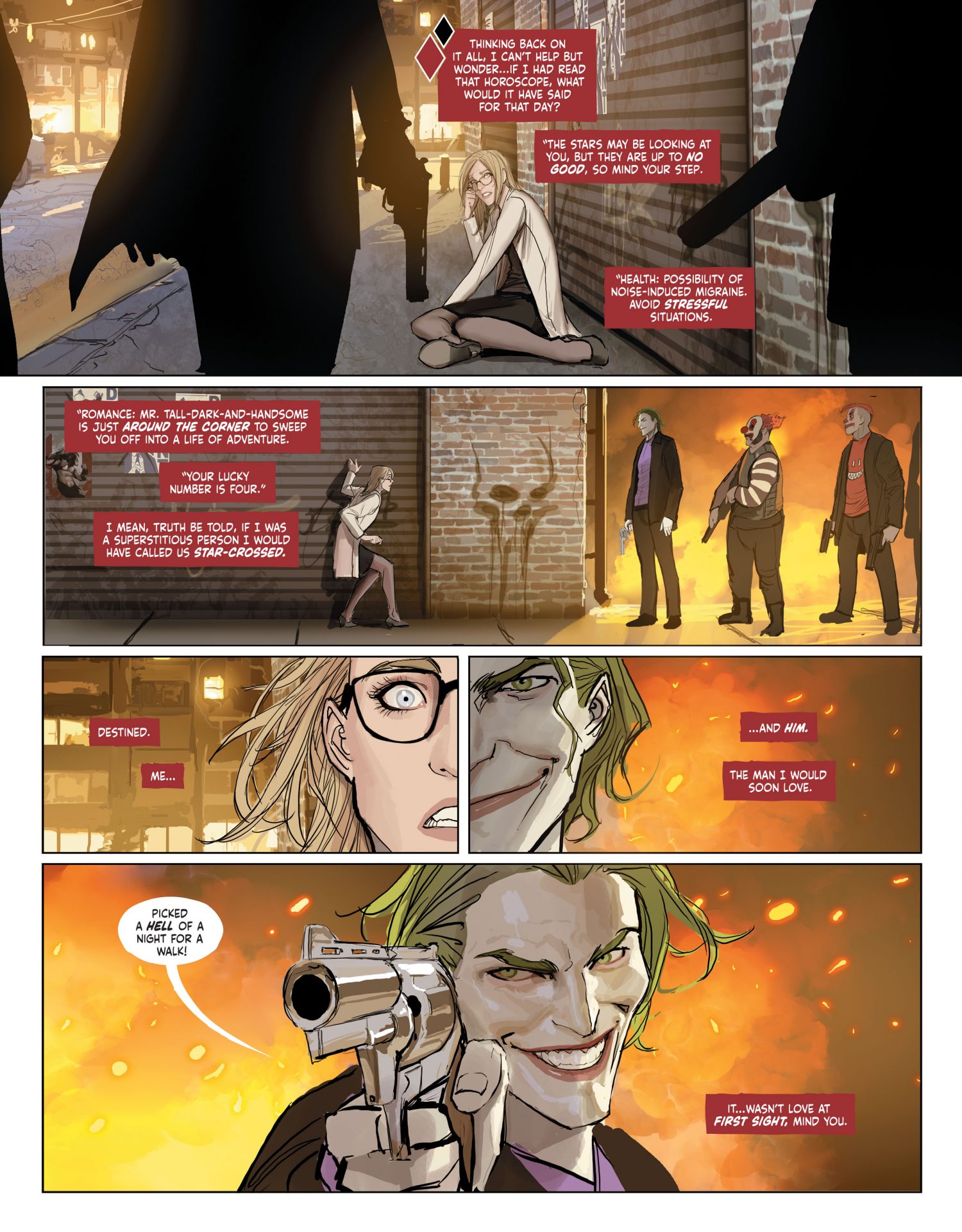 NERDIST: The idea of Batman as a monster is very present in the first issue and is a rarely explored idea in mainstream Batman comics. What drew you to that concept?

NERDIST: Do you have a moment or a character beat that you’re really excited for fans to discover when they pick up Harleen #1?

Stjepan Sejic: For me, it’s that final dialogue at the end of the issue, just because that’s literally what sold the book to DC. Before, while I was pitching it, it was just a vague concept. And then I was like, “You know what, I’m gonna make this final scene in the first book.” So I sketched it out and lettered the dialogue just so that they could see what I was offering. And I just sent it to my editor Andi and he was like, “Just just give them this.” Then the next day they got back and were like, “Yep, approved.”

NERDIST: What can you tease about the next couple of issues?

Stjepan Sejic: The second issue is gonna be a massive gut punch. The second issue is going to be intense and I’m not saying that lightly. The third issue, I’m going to break everybody and then I’m gonna laugh. Seriously, if you’ve read my stuff, if you read the finale of Sunstone and know how that ended and how powerful that finale that was, it’s nothing compared to the finale of Harleen.