We don’t deserve John Boyega. The Star Wars actor is such a genuine delight that it’s hard to imagine going through the journey of the sequel trilogy without his brilliant presence. Rarely do we get a young star so genuinely thrilled to be a part of a huge franchise. Boyega has used every possible opportunity to express his gratitude and to share his enthusiasm.

Often, that enthusiasm comes from his Instagram account, where he shares post and stories of himself enjoying Star Wars and other related nerdery. To mark the end of production on Star Wars: Episode IX, Boyega posted an Instagram video and story of himself unboxing a gift from the film’s director J.J. Abrams, who also worked with Boyega on The Force Awakens: a Spider-Man stormtrooper helmet. The results are pretty dang adorable.

If you recall, Boyega is a huge fan of Spider-Man and the Marvel Universe in general. He’s talked about his love of the character and the franchise in interviews in the past, so this has got to be a huge deal for him! According to his Instagram story, Abrams has “been talking about this gift for a while,” meaning this was a well though-out surprise.

That wasn’t all he received from the director, though. Boyega also got Poe’s jacket from The Force Awakens, the one he wears throughout the film after he thinks his friend has died. He posted his Spider-Man stormtrooper helmet with the jacket in a Boomerang on his story. 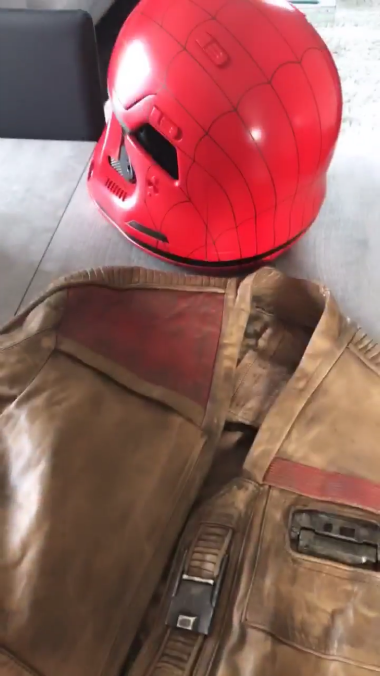 On top of all this, Daisy Ridley got her onscreen pal an Oscorp Industries prop from The Amazing Spider-Man as her goodbye gift. It appears John’s Spider-Man love is well-known on the Star Wars set.

Of course, all of this is distracting us from the real news here, which is that Star Wars: Episode IX is on its way and the end of the Skywalker saga is only months away. We aren’t ready to say goodbye, but we are happy that John Boyega gets the best-possible parting gifts.