Want that Halloween spirit without all the “going out in public” hullabaloo? You know Geek & Sundry’s answer: GAME NIGHT!

Here’s my Modus Operandi when it comes to a proper night of fun and festivities. Get together only the best people (AKA those who are obsessed with true crime, serial killers, and unsolved mysteries), play a board game that triggers hours of macabre conversation about body part consumption and/or disposal, and top it off with lots of snacks.

As a rabid fan of the true crime comedy podcast My Favorite Murder, hosted by Karen Kilgariff and Georgia Hardstark, it wasn’t hard to come up with the appropriate guest list. MFM runs a wildly active community Facebook group filled with “Murderinos” (the self-ascribed moniker for the fans). 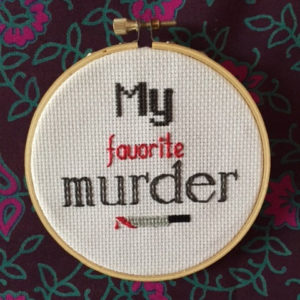 What sets this fan group apart from most true crime aficionados is its mostly female-driven messaging. Yes, we discuss the gristly details of crimes, but it is often from the angle of exploring how to prevent and self-protect, and the importance of being unafraid to stand up for yourself if a situation or individual makes you uncomfortable.

I conspired to gather together all the Murderinos whom I had at least vaguely encountered in real life, because, hey, why not invite almost-perfect strangers to your murder-themed game night?

Marlo, Jason, Mina, Jackie, Sabrina, and Erik gathered around the table to behold the cult classic, The Serial Killer Trivia Game. No one but sincere true crime enthusiasts like us could stomach this game in good humor. What should have been 30 minutes of gameplay lasted 3 hours, as our group frequently descended into the complex details of each morbid scenario and factoid encountered. 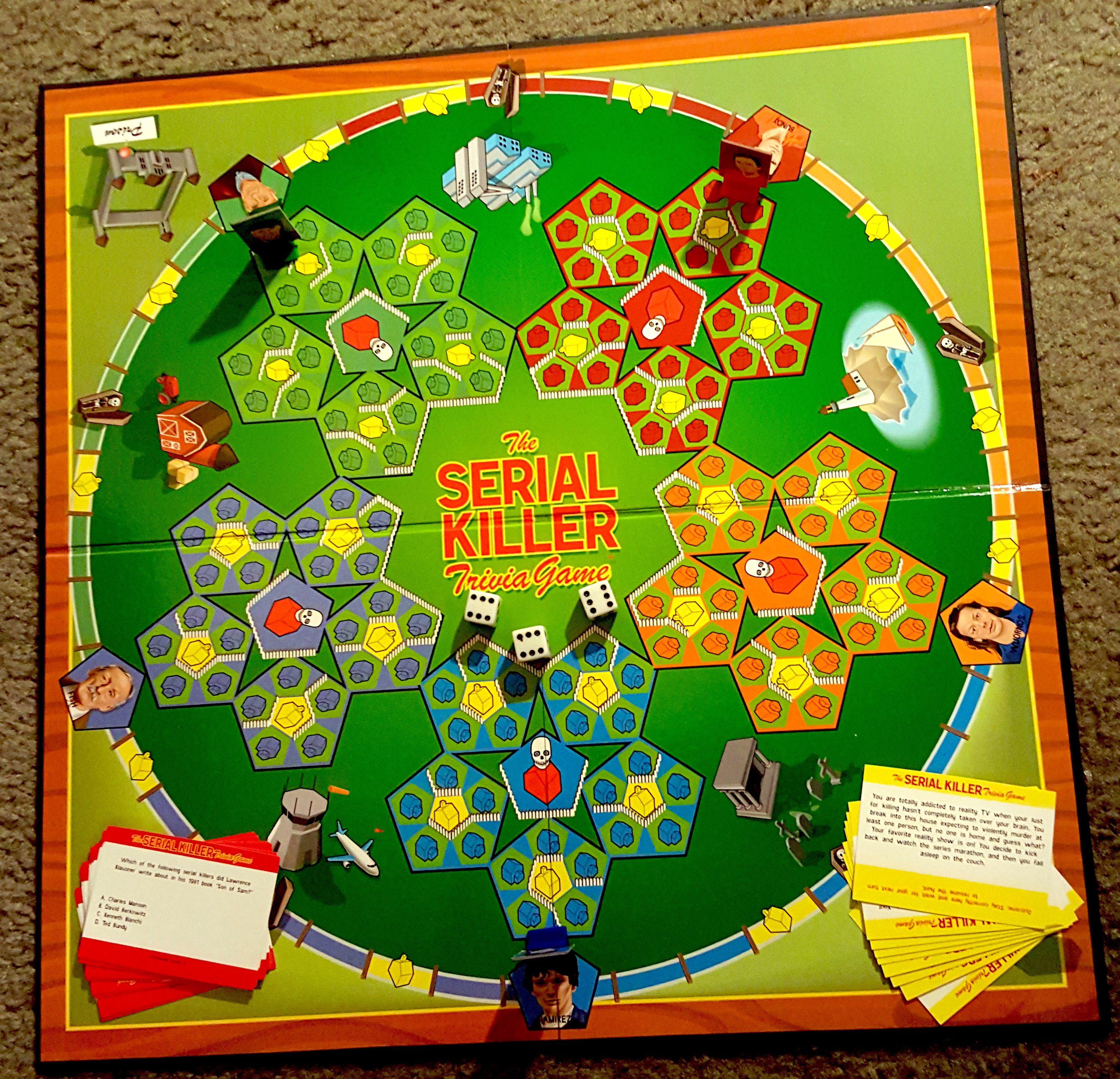 Please note! This game is no longer in publication. But, if you’d like to show your support, send a note over to the creator, who is mildly considering re-releasing it.

In The Serial Killer Trivia Game, you are playing as one of five infamous serial killers and must make your way through each of the neighborhoods affixed to the tip of a five-pointed-star, gathering victims and dumping their bodies as you carve a path of terror. Claim your victims by accurately answering the trivia cards that inquire about every category of treachery, from vocabulary to historical events. An encyclopedic knowledge of society’s seamy underbelly helps, but is not required; each question is multiple choice or true or false. 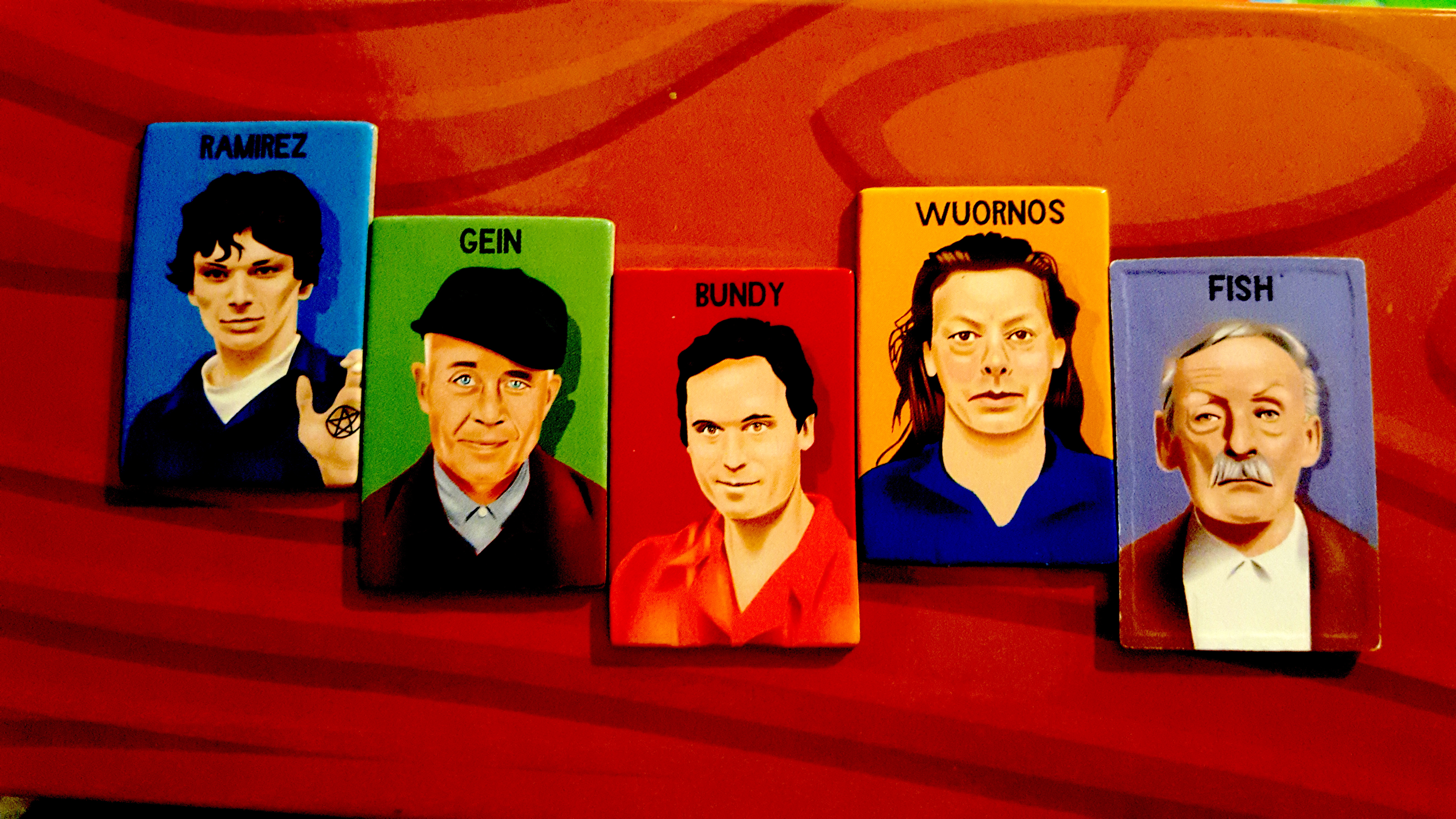 Designed for 5 players, the 6 of us followed the alternate rule of teaming into pairs to represent three characters; Richard Ramirez, Ed Gein, and Ted Bundy.

The game’s mechanics lack a compelling strategy element, requiring you to move the exact number of spaces read on the dice (of which you can choose to roll between 1-4 D6). You can select to undergo a “Scenario” that emerges when you land on a yellow house, or you can skip it. These Scenario cards either hack the game entirely, or force you to lose all your hard-earned victims. A steady game plan of “skip the scenarios” makes for a competent winning strategy.

What this game lacks in texture, it makes up for in flavor. If you do happen to obtain a copy, I suggest creating some additional home brewed rules to create more balance. Try enabling a terror track that measures town awareness as the body count rises, or creating token resources you can use to buy weapons or disguises. It’s not for everyone, but to those who folks who love to explore the far reaches of the human psyche, this game provides you with more than you ever wanted to know. 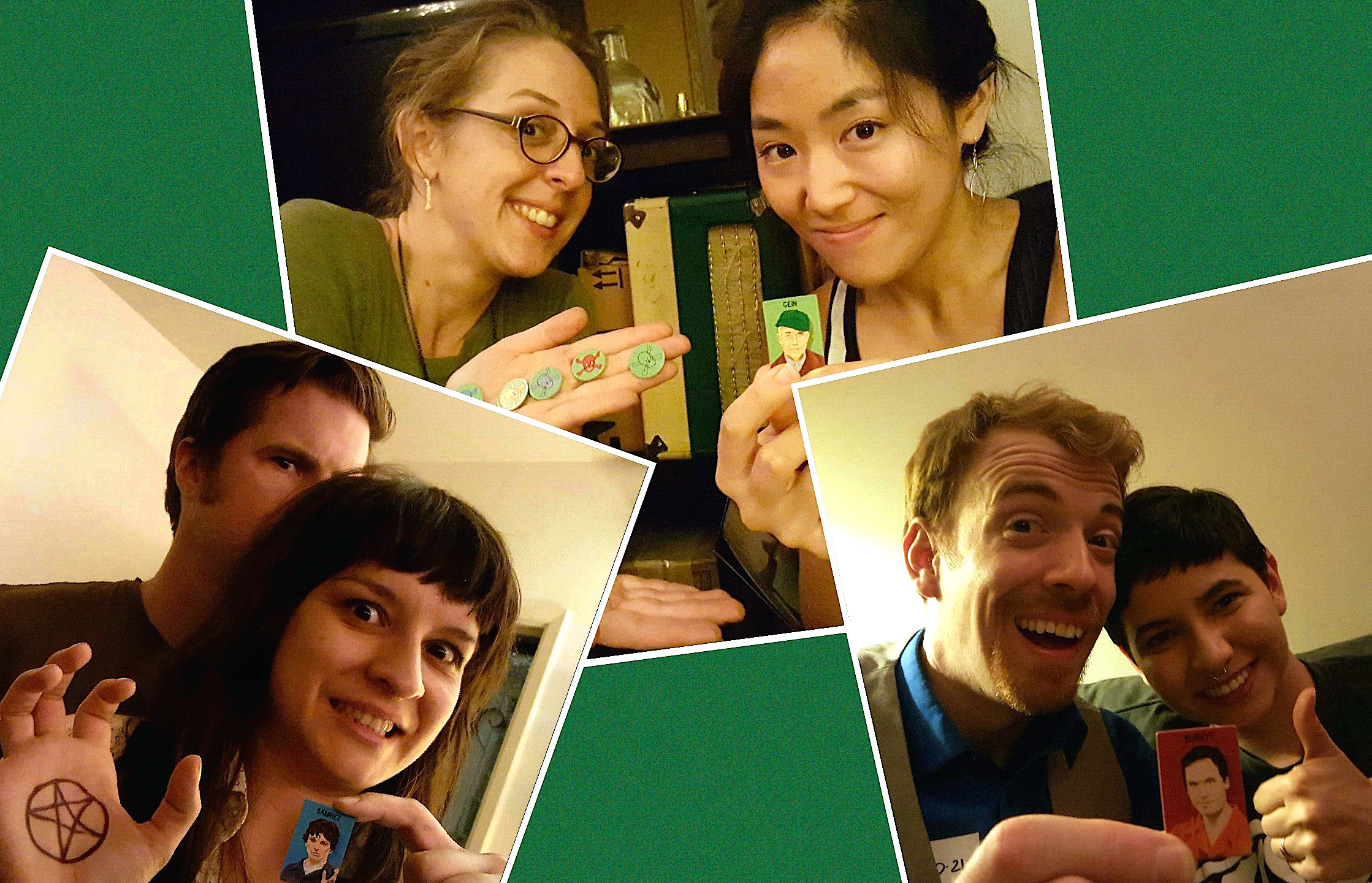 Many beers and hours later, Ed Gein emerged the victor with a whopping five victims. Fun fact, Ed Gein actually only claimed two victims, Mary Hogan and Bernice Worden. His infamy was due more to his unfortunate tendency to exhume already-dead bodies and make furniture out of them. The more you know!

If you find yourself having trouble going to sleep tonight, make sure and check out our friends Marlo’s organization Anxiety Gaming, which links gamers with gaming-positive therapists.

5 Ways to Resurrect The Halloween Spirit

More Than Fiction: Pop Culture Heroes That Served Their Nati...

Haunted Houses Level Up in ALONE: An Existential Haunting