GOODCRITTERS is a Marvelous Game of Animal Backstabbing and Treachery

Whoa nelly, I’m excited. It’s been a couple of years since Fabian Zimmermann hit us with Tiefe Taschen, an absolutely electric negotiation and bluffing game released only in Germany. It’s now made its way to North America via Arcane Wonders. Yes, it’s been given a new suit – or rather, the skin beneath the suit has been swapped out for fur – and the mechanisms have been tweaked slightly. You can let out that deep breath because Goodcritters is still the same devilish experience of greedy machinations that stole our hearts.

The driving force behind Goodcritters is its marvelous above the table play. The mechanisms serve as a light framework to both pit players against one another as well as push others into temporary alliances. It’s enitirely a social experience where your manipulation of events and soothing of egos is paramount to success. 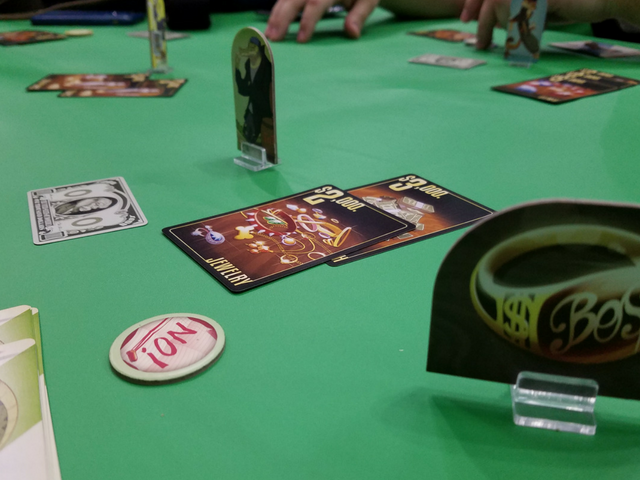 The setup is pretty simple – a heist has occurred and all of us furry ne’er-do-wells are splitting the take. It’s Reservoir Dogs by way of Junta. In fact, describing this game as a distilled version of the classic board game Junta would be the most ample comparison.

To get the grandstanding started, one lucky soul begins as the boss. This person flips a number of loot cards depicting jewels and cash of different values. They then delicately split the pile between everyone at the table.

The twist is that it’s nearly impossible to keep everyone happy. The fox slyly hanging out in the corner may get $5k while your crocodile-face only gets a measly two. So, you protest, perhaps vehemently. You throw your stubby amphibian arms into a whirl and make a big deal. Maybe the boss relents and switches the cut around – likely pissing off others – maybe they don’t. 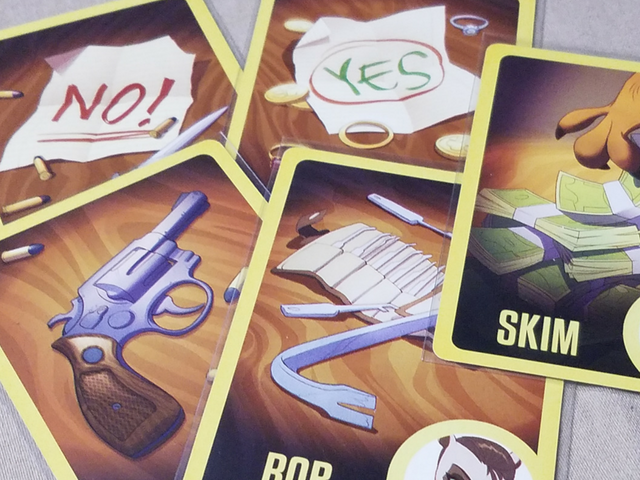 Eventually, the money is locked in. Now we argue some more. Here, everyone will eventually choose an action card from their symmetrical hand of options. You can vote to approve or deny the split, or you can get a little greedy and try to skim some cash off the top of the deck. Skimming is interesting because it doesn’t rely on the group approving the loot division, but the challenge here is that the skim only succeeds for the first person to play the card starting from the boss and heading clockwise. Usually, the head honcho is the one reaping that reward, although occasionally you’ll see a round where it happens much later.

So, say you don’t like the cut and want to inflict some pain. You can vote no on the deal and hope to cajole a few fellow animal compatriots to do likewise, or you can rob someone and squeeze some extra cheddar for yourself. In order to pull off a robbery, you place your character token in front of someone – a very aggressive maneuver – and then you must later play the card. A successful thieving steals a card from your target’s stash, which is oh so sweet when enacted as revenge. You need to be careful because an enterprising villain can counter the rob action with a guard, instead reversing the theft and stealing one of your loot cards. Eat it sucker.

All of these action cards are selected simultaneously in secret. They’re revealed one at a time beginning with the boss and rotating clockwise. This moment of extended drama is fantastic as people nervously shift in their chairs. The deal is either accepted and the money is received, or it’s rejected and it all goes back to the pot. In this instance the boss now rotates to a new player, otherwise the animal that’s running things equitably maintains their position for possibly the entire game. More money is revealed and split and eventually a special loot card is flipped and the party immediately ends. 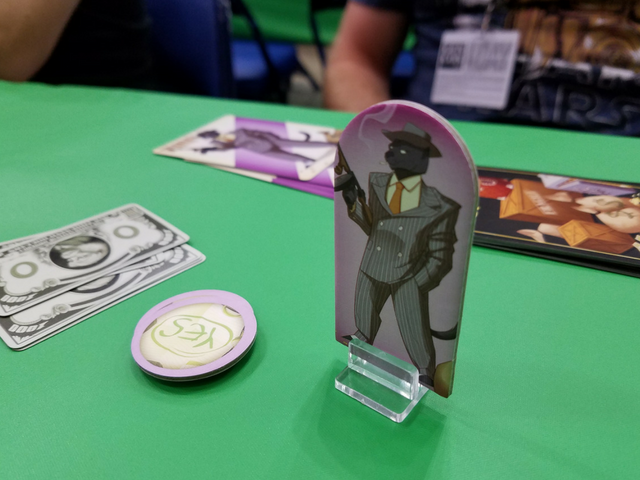 Between the lines is a mess of emotional interaction. There’s a tremendous amount of depth in social maneuvering and sinister footwork. You’re tossing out your character token, threatening to rob the boss but really hoping they play a guard just so you can skim. You’re convincing a group to all vote no when you really intend to rob the player in the lead. You’re wheeling and dealing, giving yourself clearly less moolah as the boss and hoping no one does the math to figure out you’re actually coming out ahead with your continual skims.

It’s all a series of mind games fed through social interaction and the butting of heads. The ground feels fertile for tactical play and not simply random or inconsequential. It’s the type of experience a mastermind can cleverly direct while residing somewhat in the background, revealing their money at the end of the game and surprising everyone with their bounty. It’s one of those special games where you’ll play and immediately want another shot at it.

Much of the depth resides in the math riding shotgun out of sight. Often players won’t realize they’re getting torched when the boss offers a solid payout as it’s natural to approve of such a split. The more enterprising individual will realize that there’s only a single winner at the end of the game and every split that doesn’t close the gap between you and the leader needs to burn to the ground. The way the design overtly plays with temporary and volatile relationships round to round is both gratifying and cleverly subversive.

Tiefe Taschen is one of the best social games ever designed. Goodcritters is virtually the same game and earns its stripes over the 30-minute playtime with aplomb.

Do you enjoy social games? Let us know in the comments!  And be sure to join host Becca Scott on  Game the Game every Thursday here on Geek & Sundry to watch the best boardgames played with fantastic guests!