While Godzilla may be the undisputed King of the Monsters, it wasn’t always so undisputed. During the heyday of the kaiju movie boom, another Japanese franchise sought to overtake the giant monster supremacy. Gamera, the Giant Monster premiered in 1965, a black-and-white, serious take on the kaiju. Like 1954’s Godzilla, Gamera, the Giant Monster saw the gargantuan turtle desolate Japan. In subsequent movies, though, he’d become the guardian of the country and Friend of All Children. Daiei Film produced 12 Gamera movies, and all of them are seeing gorgeous HD release from Arrow Video.

In this exclusive clip from the set, the giant turtle takes on the sharp-angled bird monster Gyaos in the third film, fittingly titled Gamera vs. Gyaos.

As you can see from the clip, and if you’ve never seen a Gamera movie before, he’s got some pretty wild powers. He can, of course, bring his arms, legs, and head into his body and use his shell as a projectile. And how? Well, he has magic rocket flame that comes out of his back to propel him. And since he’s a turtle, he can fight on all-fours or stand up on his hind legs. Oh, and of course he can breathe fire. That’s a given, really.

After the initial the Giant Monster in 1965, Daiei quickly began to transition him into the Guardian of the Universe. The next six films, between 1966 and 1972, featured Gamera taking on specific new evil kaiju in vs. movies; Barugon, Gyaos, Viras, Guiron, Jiger, and Zigra. As that series continued, the tone began to veer more towards light children’s entertainment, as the Japanese movie industry began to flounder with the advent of TV. Kids still love big monsters! This version of Gamera wrapped up in 1980 with Gamera: Super Monster. 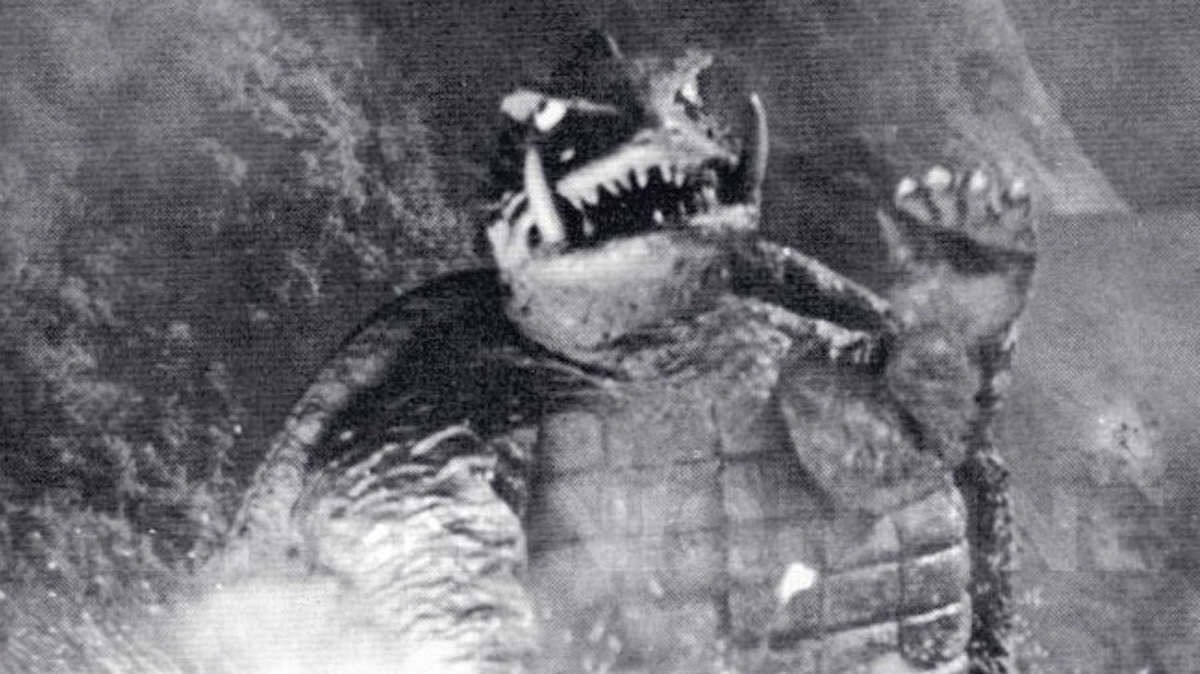 But that wasn’t the end of Gamera by a long shot. In a move that surprised fans of the giant turtle, the trilogy of Gamera films in the ’90s would take a hard turn toward the grown-up, featuring some of the scariest and most violent kaiju movies in the canon. In 1995, Gamera: Guardian of the Universe would see him take on an updated version of Gyaos, his most persistent adversary. Gamera 2: Attack of Legion followed in 1996, while the final movie in the trilogy, Gamera 3: Revenge of Iris arrived in 1999. These offered fans some of the finest effects of the genre, and some major thrills.

While the original Gamera movies have made it to DVD in North America in the past, Arrow Video’s new complete box set will see all 12 Gamera movies (including 2006’s second reboot Gamera the Brave) on Blu-ray in this country for the first time. Not only that, but 4K restorations of the critically acclaimed Heisei trilogy from the ’90s.

Other features will include scholarly commentary on every film, dozens of interviews and features, and hard-bound editions of the Gamera comic series from Dark Horse and an 80-page retrospective book.

This will truly be the set all fans of kaiju movies will want to check out. Gamera: The Complete Collection hits Blu-ray retailers on August 18.