Warning: This post contains major spoilers for Game of Thrones season eight, episode four, “The Last of the Starks.”

The fourth episode of Game of Thrones‘ final season was a doozy, one that’s sure to launch a thousand conversations about the way this show is handling it’s non-white, non-male characters, and whether that ultimately destroys a lot of the hard work it put into their stories. That’s a topic for another post, but here we’d like to celebrate one of the characters who stepped out of the shadows to remind us that he’s the cleverest, and arguably most sensible person around: Varys.

The eunuch and former Small Council member has spent much of his time after fleeing King’s Leading in secretive corners of Essos and later as a pledged member of Team Daenerys. But he’s remained mostly off-screen or relegated to the sidelines until this week’s episode, “The Last of the Starks.” After paying special attention to the iron grasp Dany is keeping on her right to the throne—despite Jon’s better claim—Varys speaks up in a moment of alone time with Tyrion.

“I’ve served tyrants most of my life,” Varys explains. “They all talk about destiny.”

Varys is worried that Dany is going the route of her father, the Mad King Aerys. As a reminder, he almost destroyed all of King’s Landing in a fit of manic rage during Robert’s Rebellion. Dany isn’t quite at her father’s level; that man rarely bathed, lost all sense of propriety, and was visibly touched. But her staunch inability to see beyond her own importance has been clouding her ability to properly rule all season. To Varys, it’s become increasingly clear that she cares less about the people she would represen than she does her own self image. 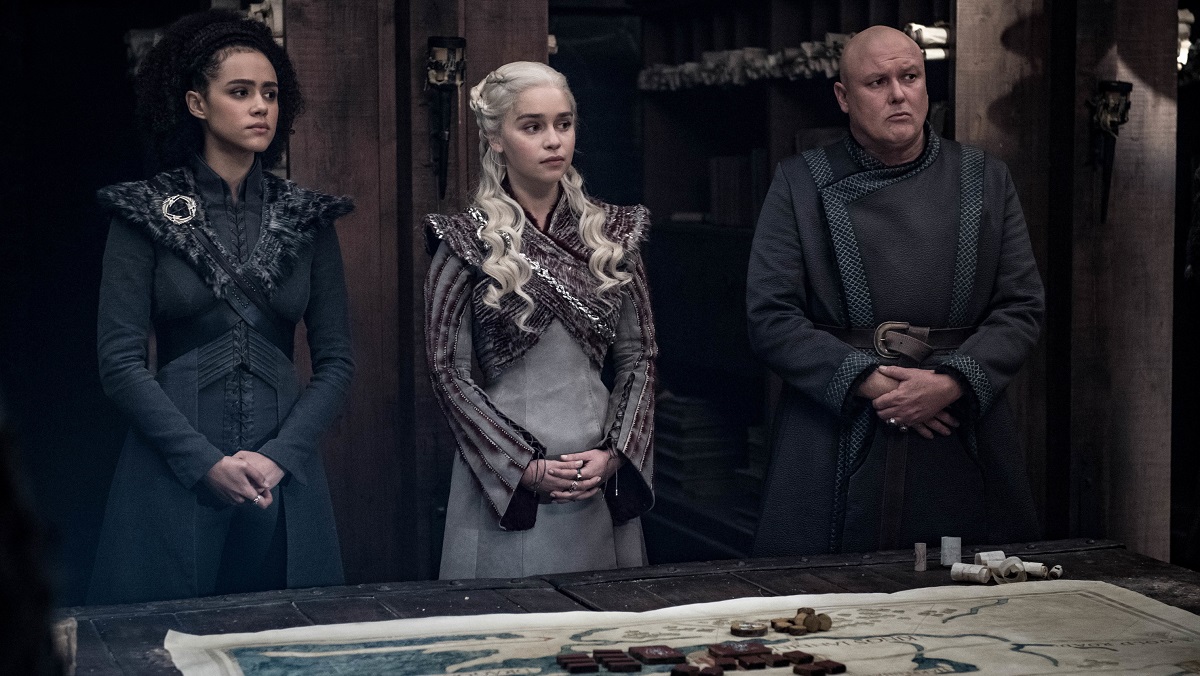 “I will act in their interest no matter the personal cost,” Varys tells Tyrion. His only concern is protecting the small folk, those who have to feed their children and live on, no matter what’s going on in closed quarters. As the plot progresses, Varys—and arguably Sansa—are the only people who seem worried about what they’re actually fighting for, not just about the inner-politics in their small circle of those in the know.

Varys is more interested in Jon, whom he discovers from Tyrion—and indirectly from a loose-lipped Sansa—is the actual heir to the Iron Throne. The legitimate son of a Stark and Targaryen. He makes the unfortunate point that men will naturally be more loyal to Jon. But Jon also has a caring heart, and a more temperate disposition. He also thinks Jon has a better chance of uniting the North and the rest of the kingdoms. He’s almost definitely right there; the Northerners still don’t have much faith in their Targaryen queen.

By the end of their meeting, Varys seems to imply that he’s working on a plot that’ll have Daenerys killed. This disturbs Tyrion, who seems both stubbornly attached to his decision to rule alongside Dany, and also afraid of what will happen to him if he steps aside. We have no idea how any of this will play out, but Varys’ fear over Dany’s self-importance, coupled with his concern about the common folk, make him the MVP of this week. Let’s see if what he’s cooking up is actually as viable as he claims it is, or if he’ll be another victim in this never-ending game of thrones.