Chris Hemsworth and Tessa Thompson Talk Costumes, Korg, and Cardi B On The Set Of MEN IN BLACK: INTERNATIONAL - Nerdist

Chris Hemsworth and Tessa Thompson Talk Costumes, Korg, and Cardi B On The Set Of MEN IN BLACK: INTERNATIONAL

Chris Hemsworth and Tessa Thompson have insane chemistry. That’s the biggest takeaway from my trip to the London set of Men in Black: International, a massive production brought to life in the iconic Leavesden Studios, just outside of the European metropolis. There were other giant projects in the works beyond the walls of MIB’s European headquarters – Wonder Woman 1984, Spider-Man: Far From Home – but it’s easy to forget you’re in the middle of movie magic when you’re seated in front of the mega-watt smiles of two brilliant young actors like Hemsworth and Thompson, who ooze oldschool Hollywood charisma.

Thompson likens their dynamic in International – the fourth film in the Men in Black franchise and the first to feature leads other than Will Smith and Tommy Lee Jones – to Katharine Hepburn and Spencer Tracy, or to Han Solo and Princess Leia. But that doesn’t necessarily mean they play love interests in the film.

“There are so many directions where [their] relationship can go,” Thompson told a small group of reporters on the set. “I think the thing that really is the most exciting about these relationships is the true meeting of mind and of wit and a back-and-forth that creates tension.”

Thompson plays Agent M in the film, a newly minted MIB professional who is drawn into the world after an encounter with aliens in her childhood. Upon her induction to the secretive agency, she’s paired with Hemsworth’s Agent H, a hero in the London offices whose reputation does not live up to M’s expectations; she imagines him as a suave, slick, top-of-his game agent, and instead finds him cocky and unprofessional. In the scene we watched them film that day, their diametric dynamic really comes through. M is straight-laced and serious, H is an aloof jokester. It’s almost an inverse of Smith’s silly newbie Agent J and Jones’ dry and established Agent K in the first 1997 Men in Black film.

Opposites often attract in situations like these, but both downplay the romance angle. Instead, they emphasize the friendship they created in Marvel’s Thor: Ragnorak, the first film to pair them up as co-leads. The bond they established in that Marvel Universe film carries over to MIB: International, and into their off-camera banter. The two had a lot of fun with us, joking about deleted Ragnorak scenes (like multiple kissing scenes that only appear in the “DVD extra extra extras,” according to Thompson), and which MCU character they’d like to see in the MIB world. (“I’d love to see Korg in the lobby here,” Hemsworth told us. “Could you imagine? The movie would just do a complete turn in his direction.”) 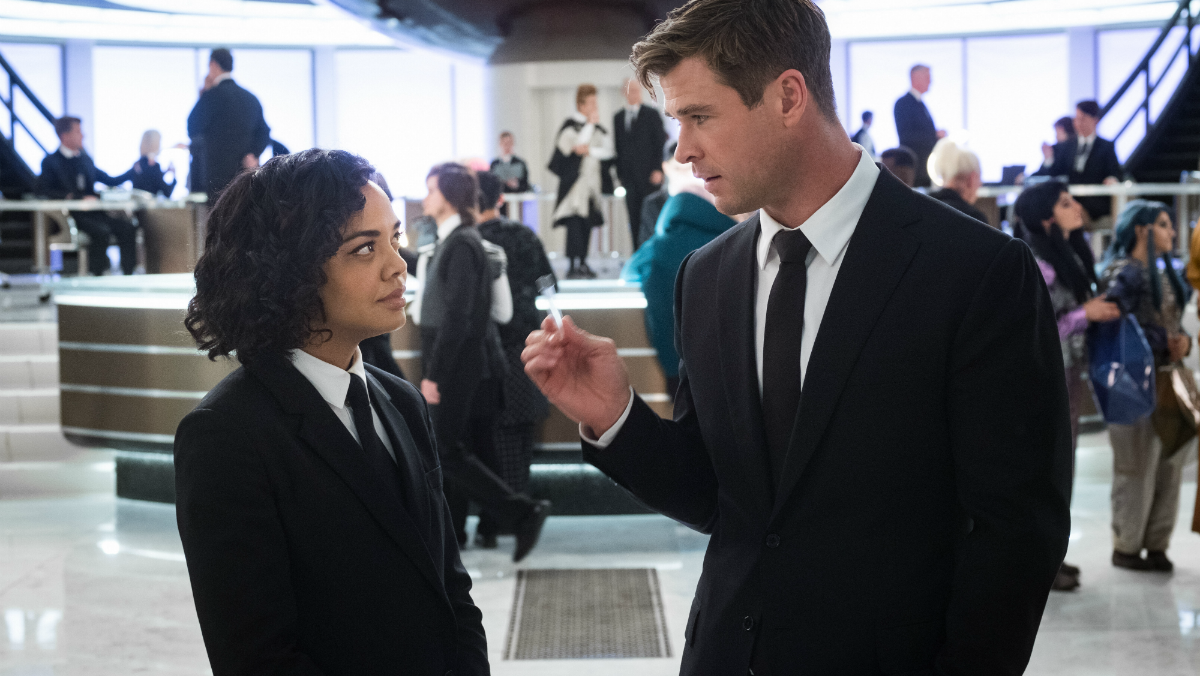 The pair also got giddy about donning the famous MIB suits, which were custom-made for the film by designer Paul Smith, and styled by costume designer Penny Rose. “They have a sort of elasticity feel, nice for the movements and stunts that we do in this film,” Hemsworth said. Thompson agreed that they were an iconic part of the process, and how much she loved wearing the Smith designs as a fan of his work.

“It’s better than the Thor and Valkyrie costumes,” Hemsworth teased.

Stepping into the suits is one thing, but stepping into the giant shoes that Smith and Lee have left behind is another thing entirely. While they admitted they haven’t yet spoken to either original actor, they did speak to the legacy the two have left behind. That, they said, made it easier to find their footing in the franchise. “The original movies have such a particular kind of tone and feel,” Thompson explained. “There’s something sort of inherent in the world of MIB.”

But that didn’t mean they were backed into a corner, performance or character-wise. Under the guidance of director F. Gary Gray, they were able to find their footing and their dynamic through improvisation, something we witnessed first-hand on set. After several on-book takes, the two were able to play around with dialogue for the rest of the set up, often yielding hilarious, fresh interactions unique to their working relationship. “[Gray] wants the best version of what’s on the page, but he’s always sort of searching for what else can we get, and he gives us a free take each time,” Hemsworth explained, adding that the off-book stuff has helped him really find the character of Agent H.

This may be a fresh new take on the world of MIB, set in global locations unique to this film, but that doesn’t mean there won’t be some standby references. When asked which real-life celebrity they’d like to be an alien in International – just like Sylvester Stallone and Michael Jackson are revealed to be aliens in the first film – Thompson replied, “>My current pitch is Cardi B.”

We’ll see if she got her wish when Men in Black: International zaps its way to theaters on June 14, 2019.