Compare Your Voice to Freddie Mercury's with 'FreddieMeter' - Nerdist

Compare Your Voice to Freddie Mercury’s with ‘FreddieMeter’

Freddie Mercury, the legendary frontman of the equally legendary rock band, Queen, had a singing voice unlike any other on the planet—although, admittedly, this guy comes pretty close. But if you want to know how similar your singing voice is to that of Mercury’s, there’s now an AI-powered online tool that can help you with that assessment, and even give you a percentage score in terms of how close you get to the real deal. It’s called the “FreddieMeter” and if any of you nail a 100% score, please give us a call ’cause we want to manage you.

The FreddieMeter tool, which comes to us via Engadget, was recently launched by The Mercury Phoenix Trust in conjunction with Google Research. And while the project has the self-evident purpose of delivering a delicious combination of giggly karaoke vibes, data, and Freddie Mercury singing, it’s also aimed at helping to garner more donations for the Trust, which is focused on funding AIDS treatment research.

To use the FreddieMeter, which is linked here, as well as above, just go to the page and click on the “Let’s Do It” button. Once you’ve done that, you’ll be able to select from four different iconic tracks, including “Don’t Stop Me Now,” “We Are The Champions,” Bohemian Rhapsody,” and “Somebody To Love.” Once you’ve picked your track, you’ll be directed to start singing along to the song—the lyrics are provided on screen á la classic karaoke—and told not to stop until the tool has given you your score. Note that the FreddieMeter works best if you use headphones, which comes with the bonus of making you feel like you’re in a recording studio.

In terms of how the FreddieMeter works, the tool’s website notes that the “FreddieMeter analyzes your singing using machine learning models that have been trained on the original studio tapes of Freddie singing,” and that “The models judge your pitch (how well you hit the notes), your melody (how well you hit the notes in relation to each other), and timbre (how much your vocal style matches Freddie’s).” Your overall percentage score is even divided up into the three component categories, so you can know exactly where you need to make improvements. 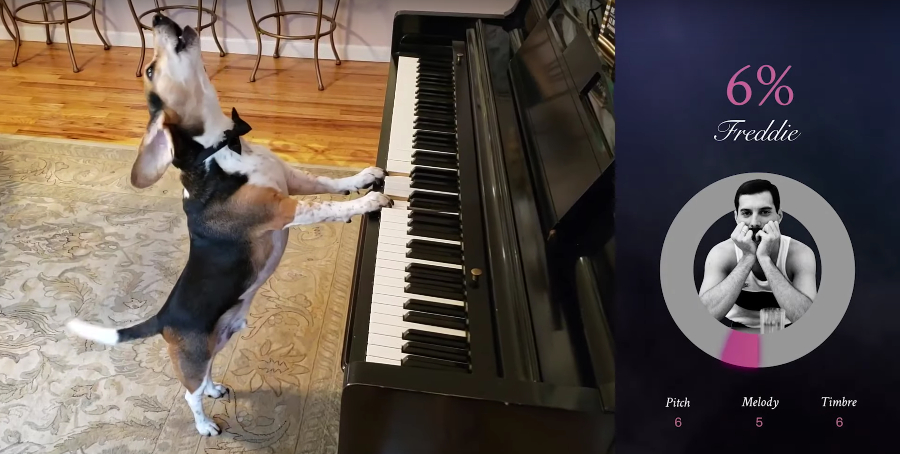 A dog scores a 6% on the FreddieMeter. Freddie Mercury Solo

And because this is Google tech we’re talking about here, there is, as you probably guessed, a secondary reason for the development of the FreddieMeter. The page notes that Google wants to use technology like this to help people identify any song just by humming it, or even help people sing better in general. Although it’s explicitly noted that “All analysis of your singing happens on your device, so your vocals stay private to you.” That’s probably a good thing for anybody else who also received a *cough* 13% *cough* for their score.

What do you think about this FreddieMeter tool? Are you excited for the prospect of having an AI-powered app that could help improve your singing, or would you rather Google be working on technology to help you find “Somebody To Love”? Let us know your thoughts in the comments!