The Marvel Cinematic Universe has a lot of iconic superhero power moves. Spidey shooting his webs for one, or Thor calling down his hammer Mjölnir. Even Iron Man blasting his repulsor rays also springs to mind. But in our opinion, the most iconic MCU superhero move is Captain America throwing his shield against an opponent, only to have it bounce right back into his muscular arms.

And now, one YouTuber has created a Cap shield that actually bounces back when you throw it against an object. And no, it’s not just a frisbee painted red, white, and blue. Via Geeks are Sexy, we’ve discovered a DIY tutorial from JLaservideo, on how to make a pretty darn authentic Cap shield. Minus all that vibranium alloy of course. Some elements are just a tad hard to come by. You can watch the video in full right here.

We have to give big props to the YouTuber here. Unlike other “make your own Cap shield” videos, he didn’t go the drone route. Which is kind of cheating. The MCU shield bounces after all, it doesn’t fly. According to their own description, the shield they made was created with carbon fiber with a fiberglass ring, to provide bounce while keeping maximum strength. The shield also magnetically connects to the user’s wrist, and can be thrown overhand just like Cap. We think the final results are pretty darn impressive. 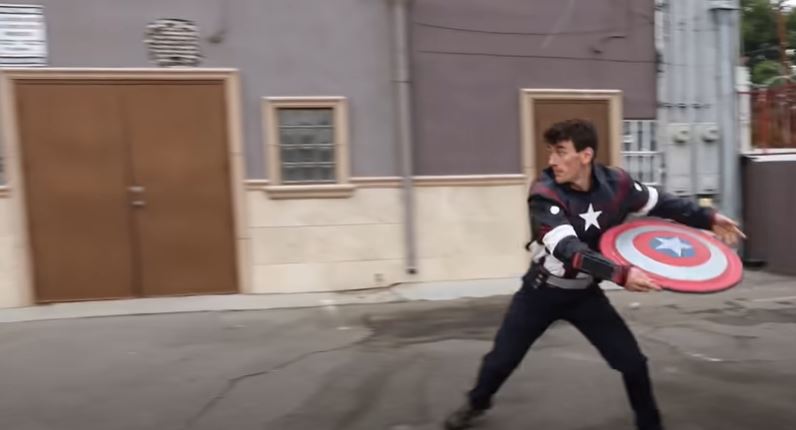 JLaservideo has some other cool DIY Marvel weapons on his channel. He made an actual Iron Man helmet that extends and retracts over the wearer’s face. And with Tony Stark’s signature augmented reality feature to boot. There’s also Yondu’s whistle-controlled arrow from Guardians of the Galaxy, and Spider-Man’s automatically form-fitting costume. And those are just the tip of the Marvel iceberg.