Every Easter Egg in WHAT IF…? Episode Two

What If…? episode two is here and, if you can believe it, this episode of the Disney+ Marvel series was even better than the first. This time the new universe centers around T’Challa. Here, though, he isn’t a king of Wakanda… at least not in name. Instead, he’s taken on a new mantle. This hopeful romp through the cosmos gave us some awesome action and a ton of great Easter eggs. So let’s go, space cowboys!

A New Guardian of the Galaxy 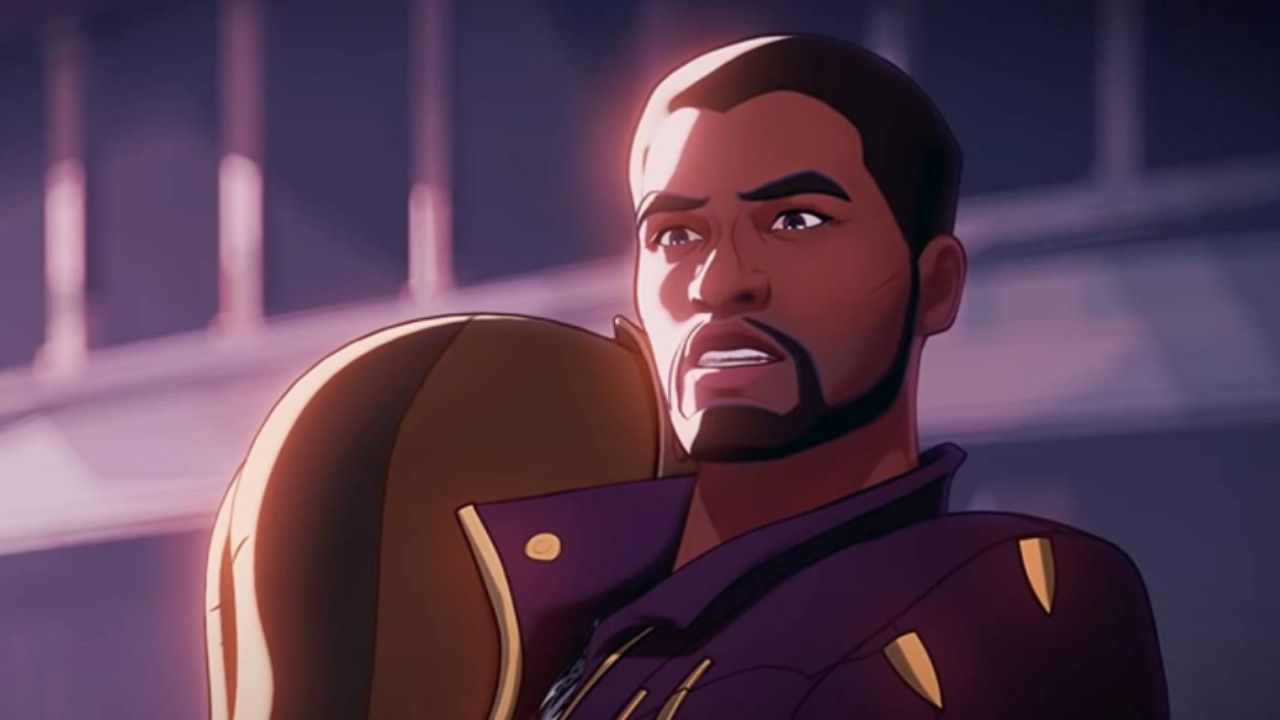 Let’s begin with this episode’s core concept: what if Yondu and the Ravagers kidnapped T’Challa instead of Peter Quill? It’s an interesting reimagining of the MCU’s Guardians of the Galaxy and one that has huge implications for the universe. Those implications can be simply summarized: if T’Challa becomes Star-Lord, the universe is a much better place.

One of the biggest changes is that T’Challa is actually well known and loved. We get a great callback to Guardians of the Galaxy that proves as much early on. As T’Challa recreates Peter Quill’s famed opening heist, Korath discovers him. When Peter declares he’s Star-Lord in the movie, Korath is baffled. Here, he’s excited. In fact, he’s Star-Lord’s biggest fan. It’s a fun way of introducing the new status quo while paying homage to Quill.

“Are you sure you cannot fly or shoot lasers out of your eyes?” 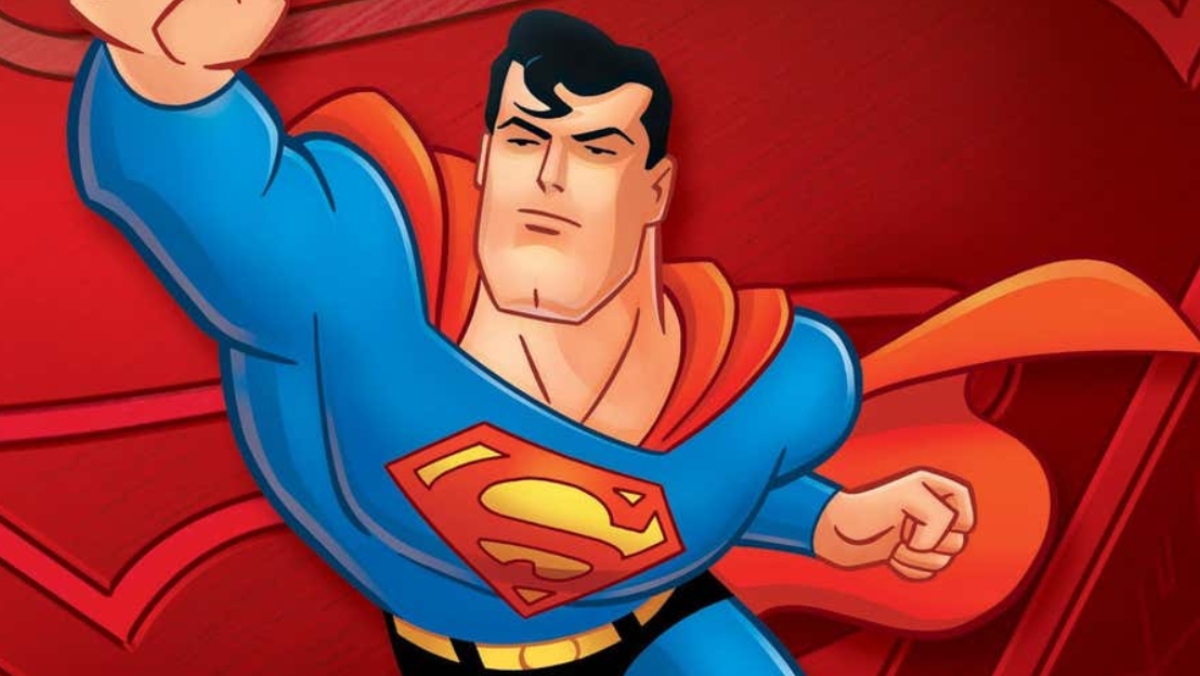 How often do we get a DC Comics reference in a Marvel project? Not that often, so this one stands out. When the Ravagers pick up T’Challa they think he’s Ego the Living Planet’s son. They’re quite surprised when he has no powers. But this question about flying and shooting lasers from his eyes is clearly a nice little nod to Superman. And it’s not unintentional because in this universe T’Challa is essentially an adopted alien baby, who becomes a prodigal son, and makes the world a better place—a la Superman.

Speaking of the power of T’Challa, one of the biggest reveals of this episode is Thanos. T’Challa talked the Mad Titan out of his genocidal mania. This makes sense in the context of the MCU as we know that Quill was the reason the Avengers didn’t get the Gauntlet in Infinity War. So in a world where Quill never became Star-Lord, we get peace. And even funnier than that, we get to see Thanos as a member of Yondu and T’Challa’s Ravager/Guardians. 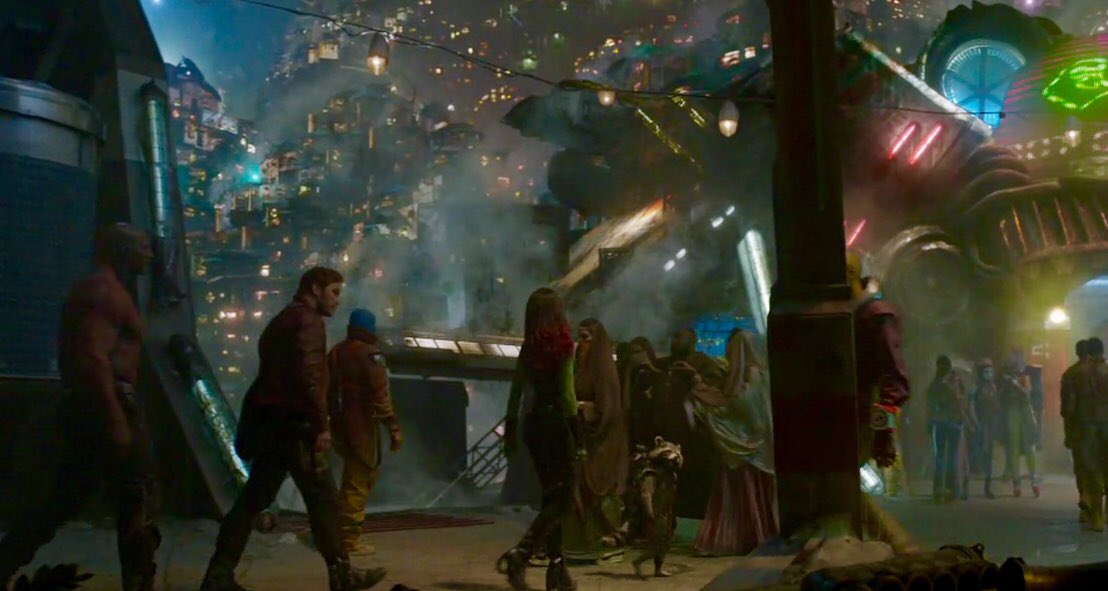 Correct us if we’re wrong, but it seems like, when we join the Ravagers in the bar, they’re in the Boot of Jemiah. You might remember the bar as the place where we first met Drax in Guardians of the Galaxy Vol. 1. In this universe, it seems like Drax still works there. He too is a big fan of Star-Lord, though Drax is apparently not a Guardian.

We also see more of T’Challa’s impact here. Not only is Drax not a Guardian, but his family is still alive because Thanos never killed them. Why? Well, that would be because T’Challa turned Thanos good! Love this for him.

Another returning character we see is Nebula. But seeing as her dad has turned good, she’s looking far happier and more glamorous. She, like everyone else, has a deep connection to T’Challa. The pair are close friends and often partner up on missions.

Lifestyles of the Rich and Famous

We got a funny and unexpected little period nod here. Yondu references T’Challa’s love of Robin Hood, but calls him Robin Leach. Leach was the host of Lifestyles of the Rich and Famous. It seems like a relevant gag as we’re about to meet a very fancy man and his very fancy house of fancy things…

The Embers of Genesis 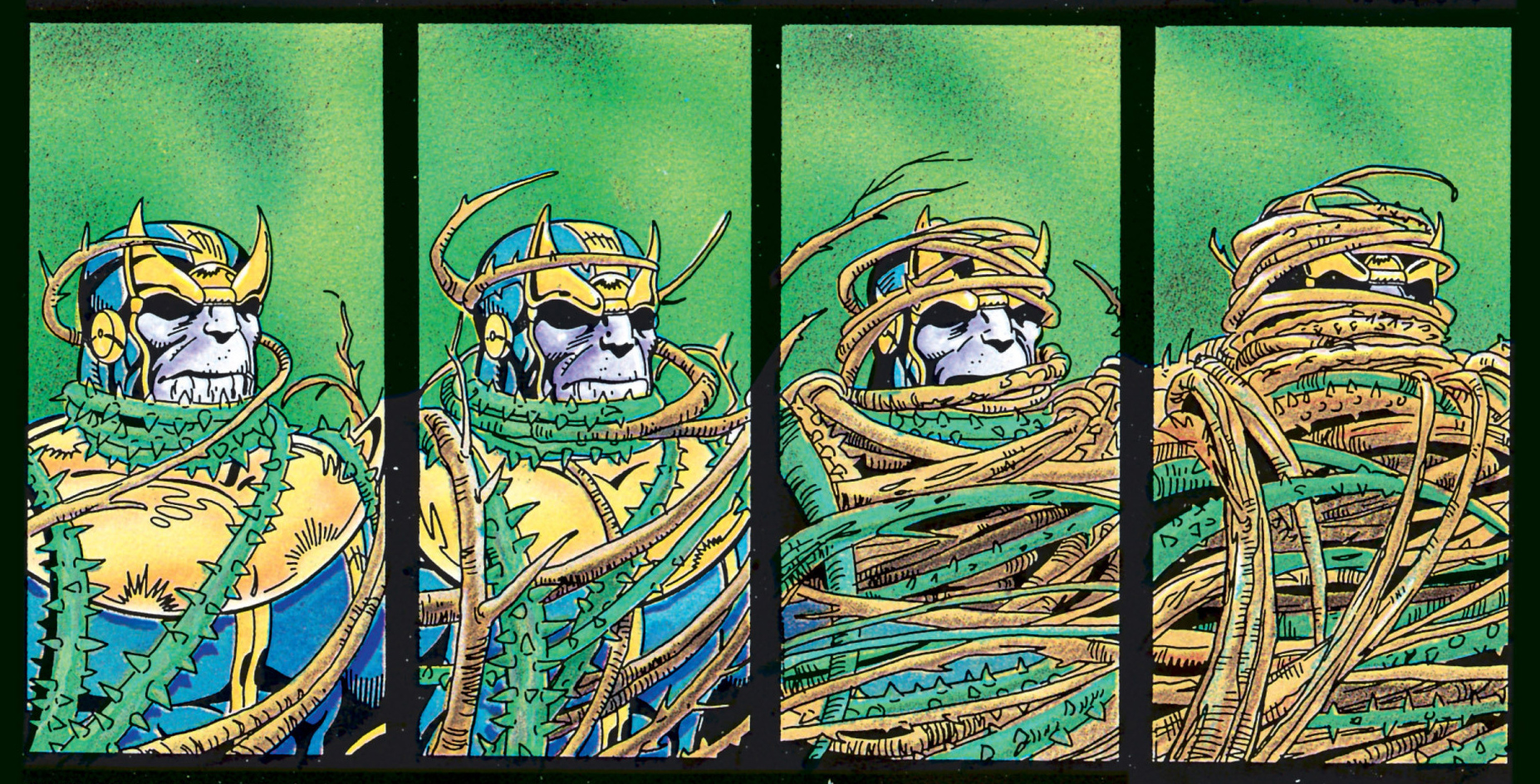 So what are the new Guardians looking for? That would be the Embers of Genesis. While there’s no comic book basis for them that we know of, they do remind us of something. When we see the Embers used later in the episode, they speed up the growth of one of the Black Order. So we think that it’s a shattered Time Stone. Not only is it green, but when it hits its target here, the target blooms, growing exponentially. In 1990s comic The Thanos Quest, Thanos collects the Time Gem from the cosmic elder known as the Gardener. The being used it to create an immense and everblooming garden, and even attempts to grow vines to strangle Thanos. Seems like proof and a cool comics Easter egg to us!

The Collector and His Collection

Just like in the original version, our heroes come up against the Collector. Where else would you find something as mysterious as the Embers of Genesis. But here he’s more of a tyrant, which means he has even more cool stuff in his collection. Two big things that we caught are Cosmo the Spacedog and Malekith. The first is the real life USSR dog astronaut who showed up in the Collector’s museum in Guardians of the Galaxy Vol. 1 and has even been a Guardian in the comics. He’s also now in the Guardians ride at Disneyland! Secondly, Malekith is the powerful Dark Elf from Thor: The Dark World. Basically, the collector has been collecting, baby.

An Unexpected Team Up 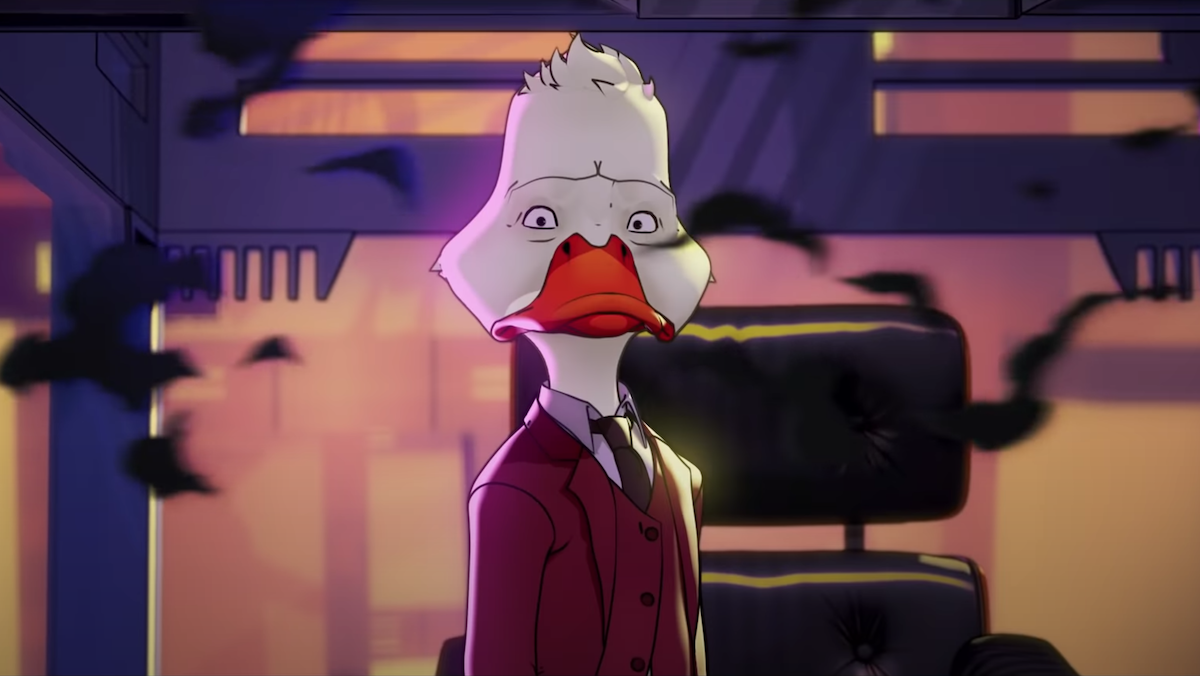 Folding in one of the MCU’s favorite Easter eggs, Howard the Duck, into the wider story was a masterstroke. Here T’Challa asks the duck for directions. Howard gives him an Easter egg-filled answer referencing the Frost Giants before T’Challa frees him. The smart mouth bird plays a key part here which will make old school Marvel movie fans happy.

Sitting on the (Collector’s) Docking Bay

As T’Challa attempts to escape, we venture into the Collector’s aircraft hanger. It’s filled with some really cool ships that reference a bunch of our favorite MCU movies. We think that in the blink and you’ll miss it scene we saw: Peter Quill’s ship, the Milano, from Guardians of the Galaxy, the Grandmaster’s party ship from Thor: Ragnarok, the glass globe that looks like the ship Rocket and Groot used in Guardians Vol. 2, and a spiky star ship that looks like a lot like the Nova Corps ships we see in the first Guardians film.

Korg’s Arm and Other Strange Weapons 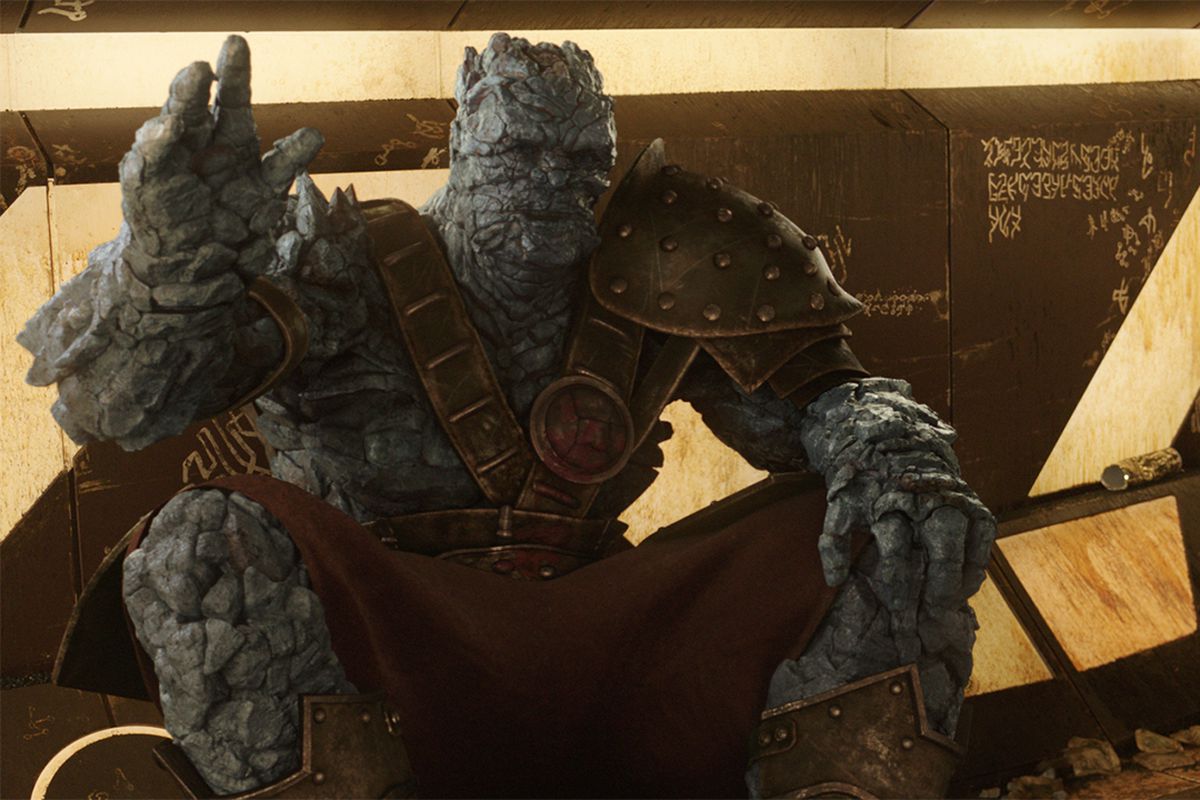 As T’Challa faces down the Collector, we meet a very unexpected weapon: Korg’s arm. And that’s not the only weird and familiar weapon we see this episode. The Collector is ready to fight, which leads him to wield a few awesomely powerful artifacts. There’s a dagger forged in Dark Matter. That comes from the leader of the Dark Elves, Malekith, who we saw earlier. Next up is Hela’s Helmet and her powerful Necrosword. It’s a badass little display, but of course it’s no match for our powerful Wakandan hero.

Some Other Interesting Artifacts

As the fight heats up we see a vault that includes some massive MCU Easter eggs. Not only do we see Captain America’s shield, but the box also includes Thor’s hammer Mjölnir and what looks like Loki’s horned helmet underneath. It raises a few key questions. Without Thanos raiding the galaxy for Infinity Stones, did the Avengers ever even exist? And if not, how did the Collector find these artifacts? He could have sourced Cap’s shield even if Cap was never thawed, but Loki and Thor are far more intriguing. 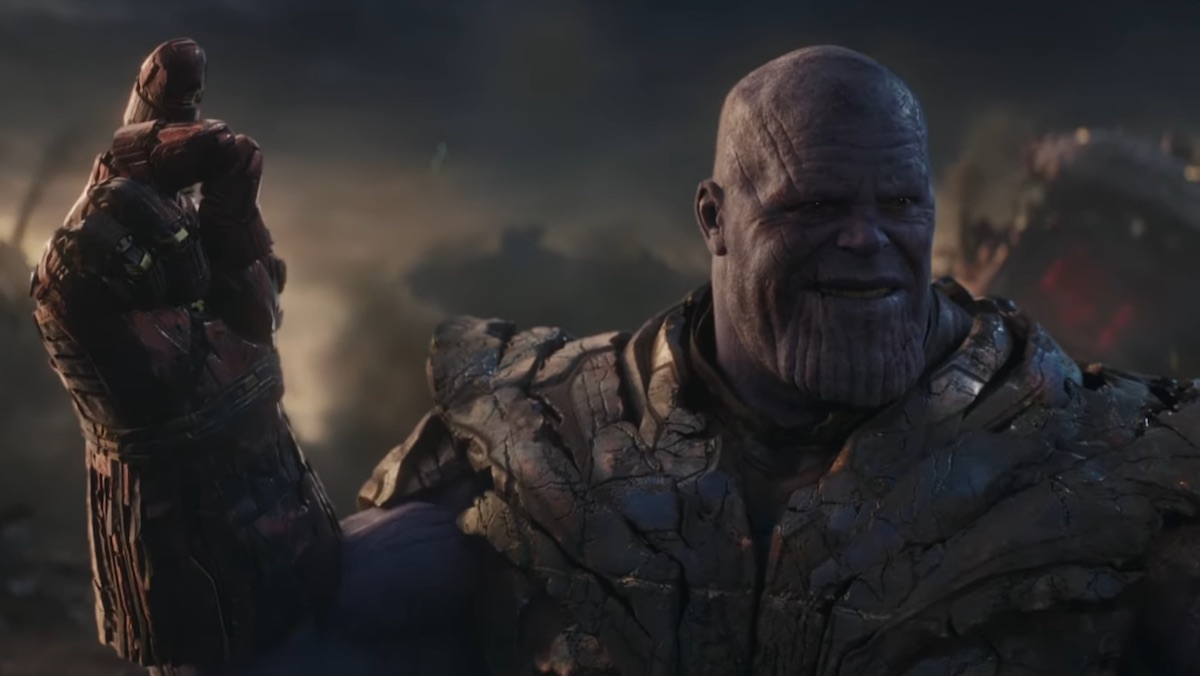 As Thanos runs back to fight the Black Order members who now serve Tivan, Nebula calls him crazy. “Not crazy. Mad,” he replies. That’s a nice little nod to his other alias, the Mad Titan. But here he’s more like the Heroic Titan thanks to T’Challa’s influence.

As the episode ends, we meet Peter Quill. He never got kidnapped by Yondu and he’s working at Dairy Queen. First of all, this is a nod to the beginning of Guardians of the Galaxy Vol. 2. There we saw Ego take Peter’s mom Meredith to the Dairy Queen, where he apparently buried a piece of his essence. Here, instead, we see him hunting down Peter, likely to kill him. As the Watcher says, this might cause the end of the universe ,but that’s a story for another day. That could well be an episode we get in a potential second season. It also means that there’s a canon universe where Peter Quill died.

TAGGED: Black Panther, Disney, Guardians of the Galaxy, Marvel, MCU, T'Challa, What if