This year, Tom Taylor raised DC’s Nightwing series to new heights. Now, he’s taking over the adventures of Superman. But it’s not the Man of Steel we’re all familiar with. It’s Jonathan Kent, the son of Clark Kent and Lois Lane. With his father taking off to the depths of space, Jon is taking over as the protector of Earth, in Superman: Son of Kal-El (which you can read the first six pages of below). Nerdist recently participated in a roundtable interview with Tom Taylor, just as Jonathan Kent takes flight in his first solo series. 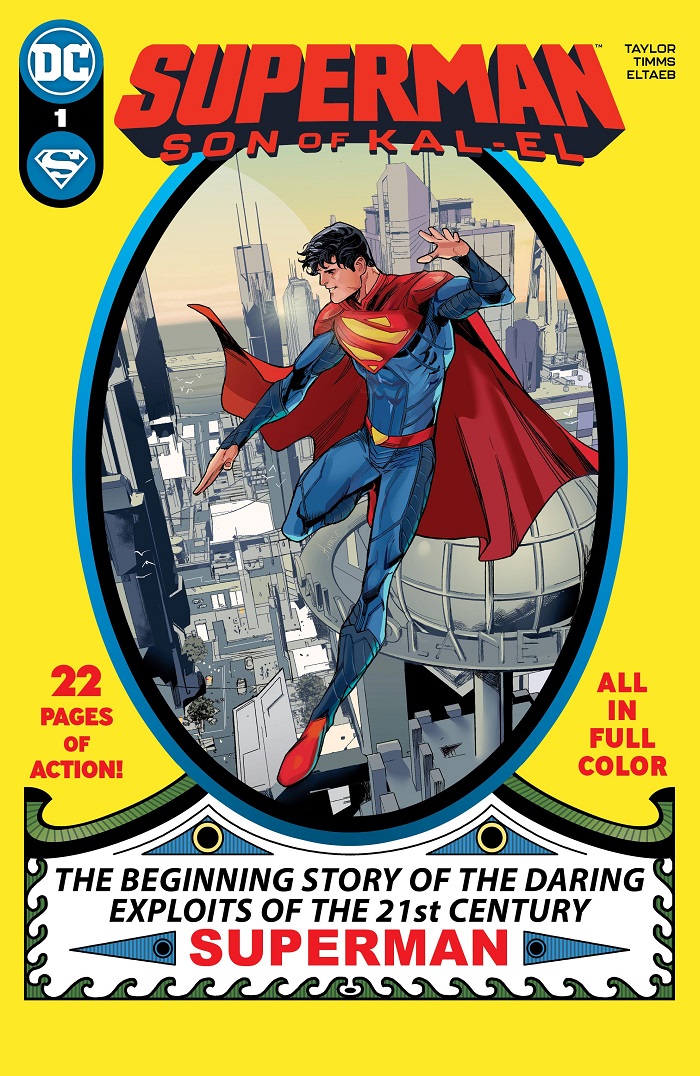 Nerdist: Kal-El is one of the most famous adopted superheroes. He’s a character who didn’t know who his real parents were until he was much older. And obviously, Jon knows exactly who his parents are, and they’re super famous. Are you going to play with that difference of not knowing who your birth family is and how it affects your worldview, versus having the most famous parents in the world?

Tom Taylor:  Certainly, the fact that he has the most famous parents in the world is a big factor. Obviously, now that the world knows [Clark Kent] Superman’s identity, they know Jon’s. Like there’s an impact there. And it was certainly part of my original pitch that we have to deal with that. You’ll see a lot of that in issue two of Son of Kal-El, when he’s sort of coming to terms with that.

He knows that there’s nowhere in the world where he can go and be anyone other than himself, where no one recognizes him. You know, Superman’s as recognizable as Coca-Cola, it’s a brand that the whole world knows. And so it’s not something that Jon can hide from, but you’ll see something actually at the end of issue one, the conversation he has with Damien Wayne [Robin] that addresses that a little. 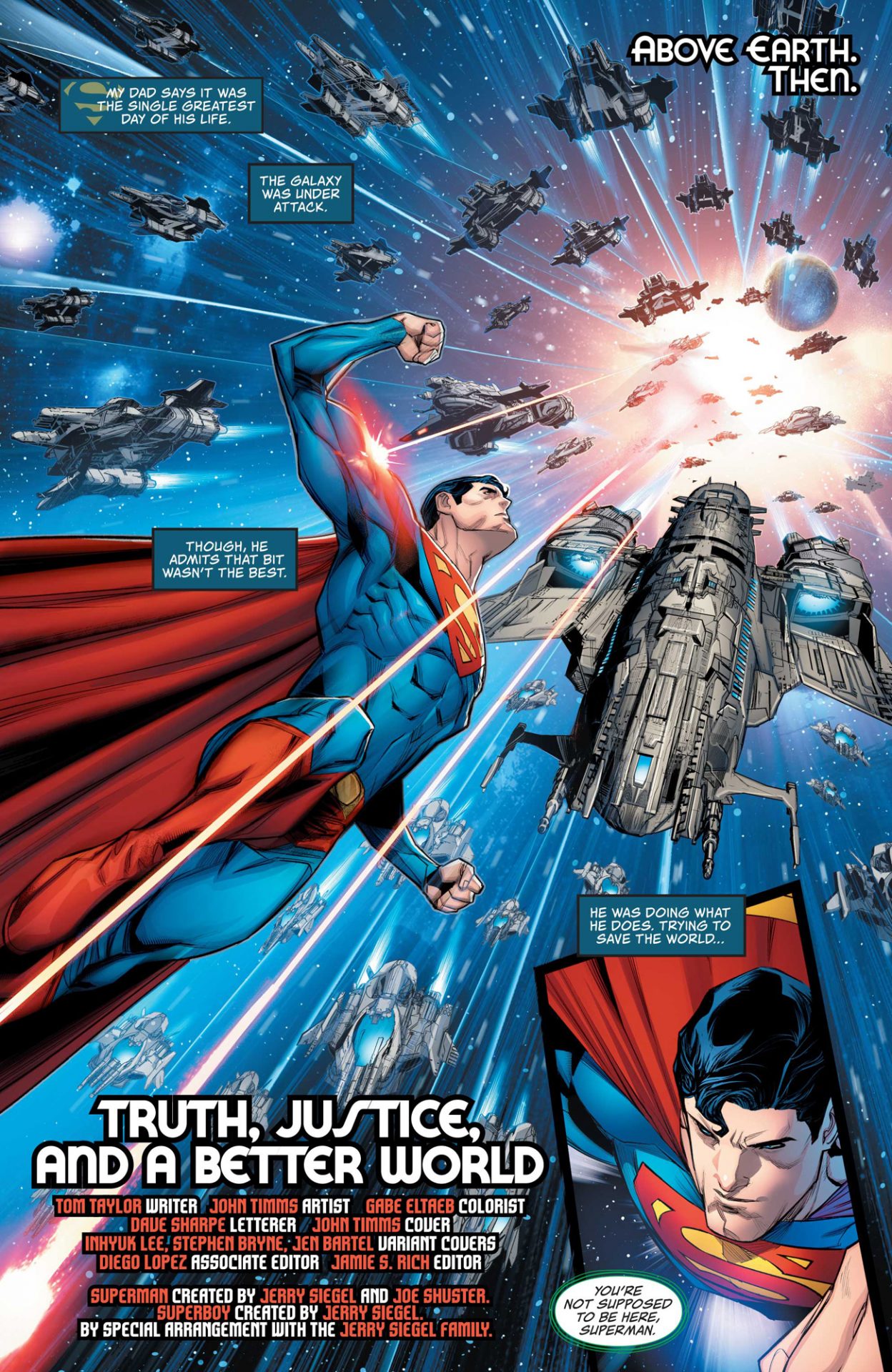 Nerdist: Jon Kent is stepping into the shoes of the greatest superhero of all time. Will he ever have to deal with imposter syndrome?

Tom Taylor: I think it’s an interesting issue because he’s 17 years old. His dad is the most famous person on the planet, and the greatest hero on the planet. And a lot of people kind of feel that way about their fathers. But with Jon, it’s the truth. And so, yes, there’s going to be an element of imposter syndrome. But there’s also an element where Jon challenges his own father. He looks at what Clark’s done and looks to see how he can improve, or wonders why he hasn’t done more. And he challenges him on that. 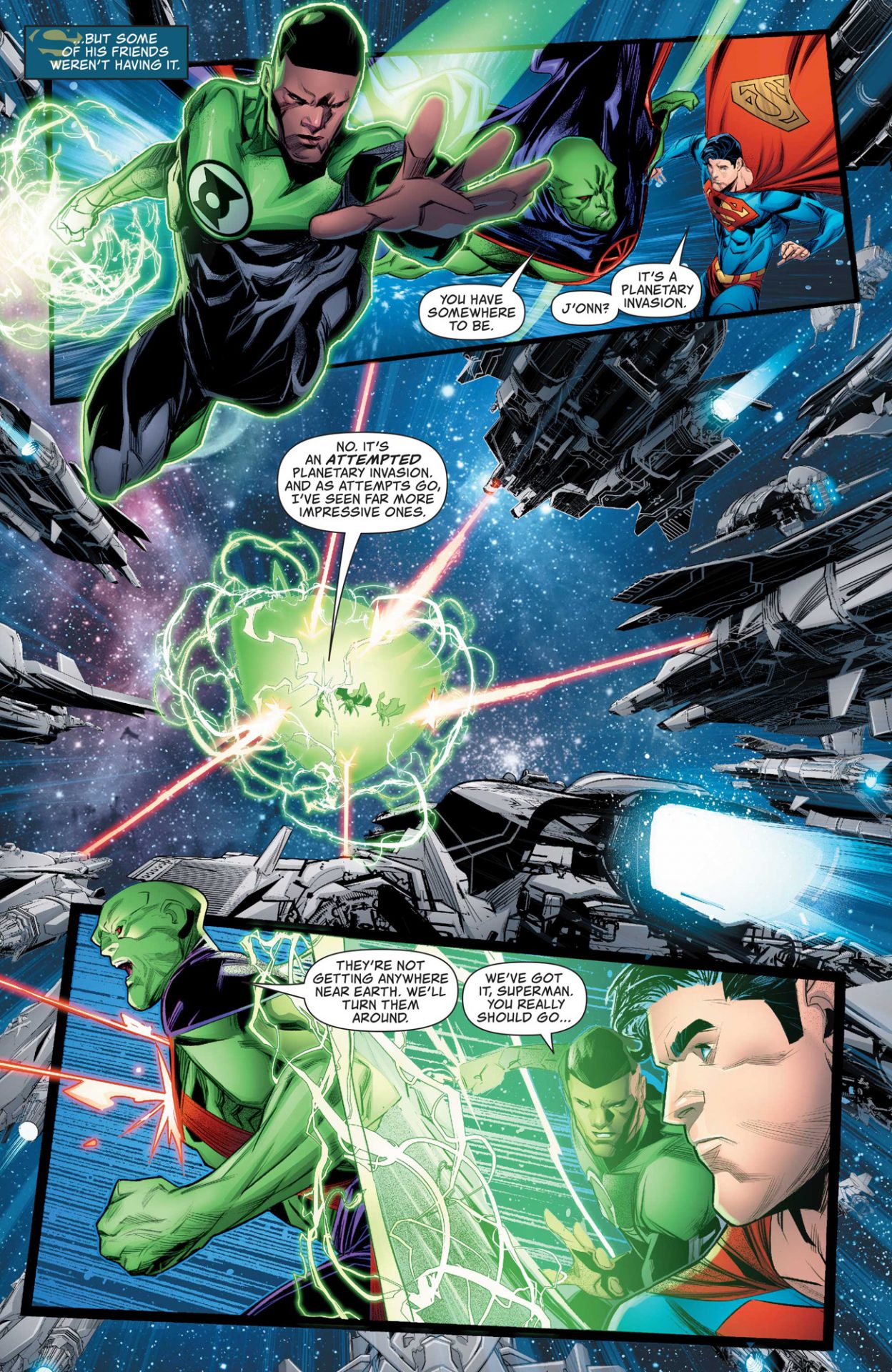 Nerdist: The timing of this comic makes Jon Kent a Gen-Z character. Are you going to address the generational differences between Jon and his father in terms of how they approach being Superman?

Tom Taylor: I don’t want to say there’s a recklessness to Jon, but I think every teenager has that sort of passion when there’s something they’re really feeling, they act on it, or they feel it harder. Which I love. And fortunately, I have a 15-year-old in [my] house. He’s the one telling me, “Yeah, no, Jon wouldn’t do that Dad.” That’s very useful. And so I can bring a bit of his real-world drama into this as well. So he’s a good sounding board.

But yes, Jon’s age plays a role in this when he’s confronted a bit. Things like in issue one, when he’s confronted with the government saying, “Hey, do you want to stand against us?” And Clark would do something different in that situation. He would find a way to talk through it or whatever. Jon doesn’t know how to act yet. And there’s something right about that from a storytelling sense. 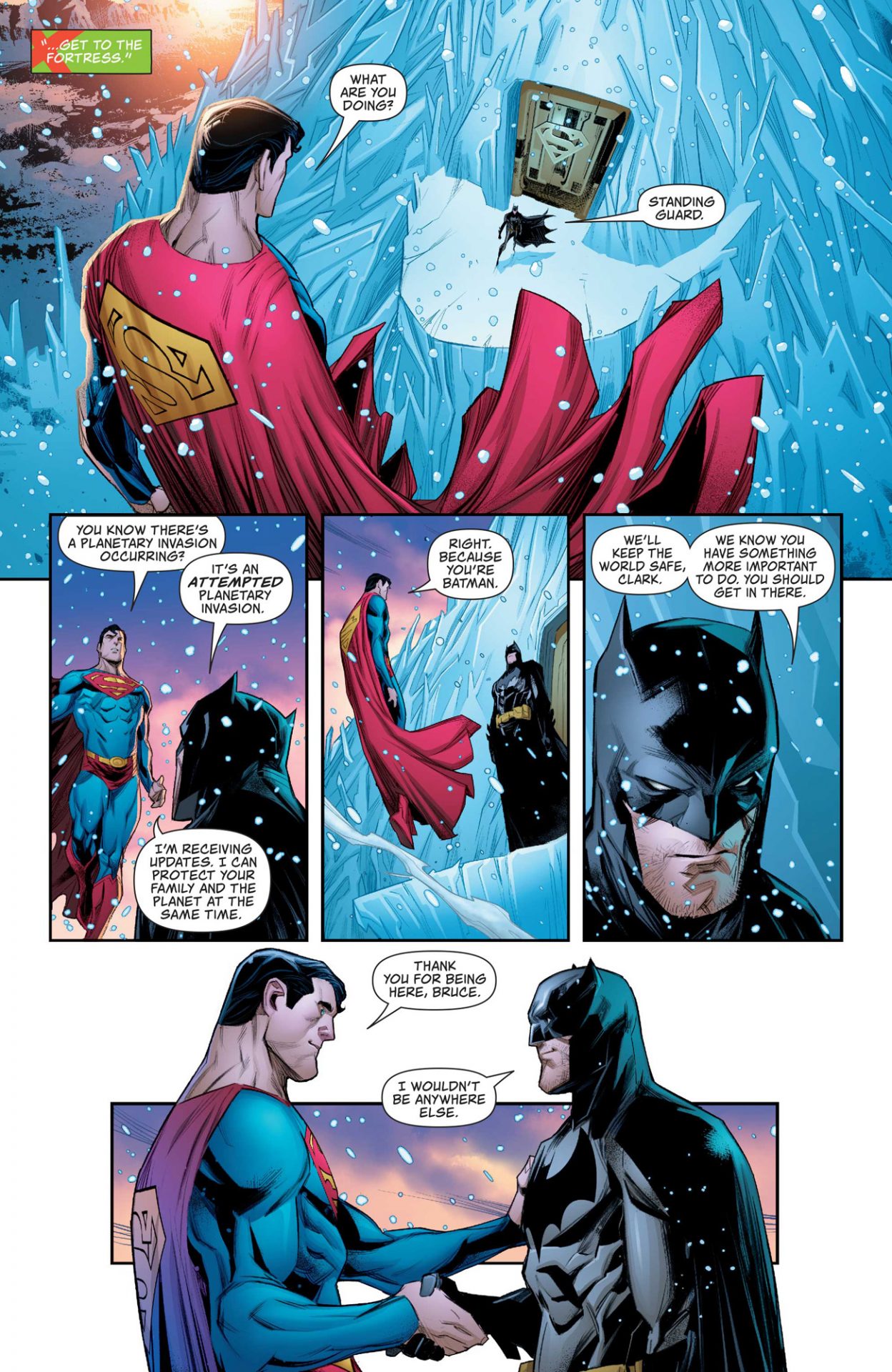 Nerdist: Superman revealed his Clark Kent identity to the world, and by doing so, made his son Jon Kent famous too. Are you going to explore how Jon feels about the idea of secret identities in general now? And would he ever explore getting one?

Tom Taylor: There is going to be some secret identity talk. And talk about whether there is a life where he can be away from being Superman all the time, from being Jon Kent, 24/7. It’s daunting. Imagine being a 17-year-old, and not being able to walk down the street because people have seen you fly through buildings. He is essentially a celebrity in every sense of the word.

Especially as someone who’s just come back come back from the future [in Legion of Super-Heroes]. We have seen him grown up very fast, away from this world, and come back. So of course, there’s going to be a part of him that wants to hide and doesn’t want to be in that scrutiny all the time. And he may find friends that help him do that. 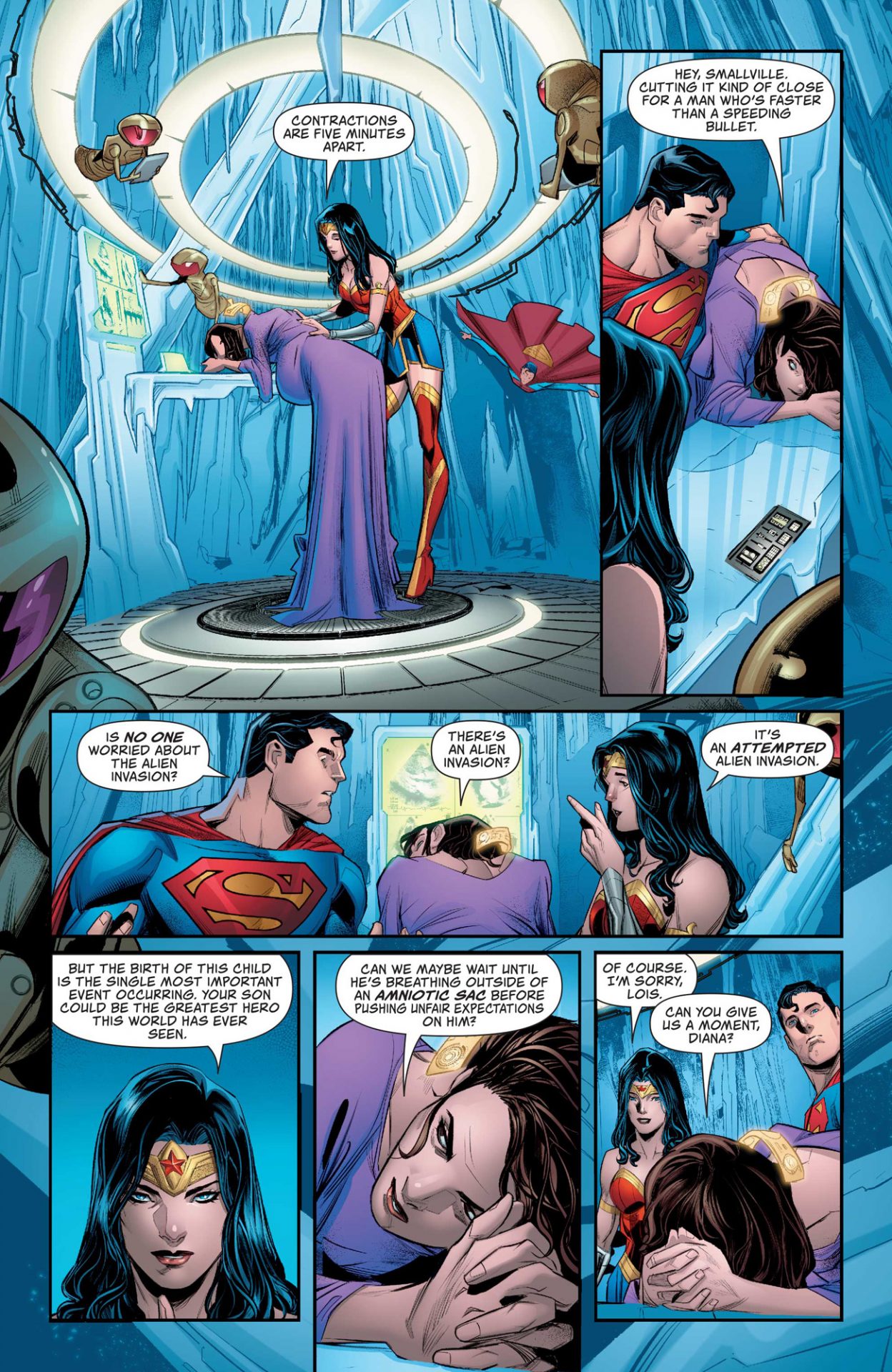 Nerdist. Since the ’90s, Superman’s clone Conner Kent has been Superboy. Then he went away for some time, and Jon Kent became Superboy. But now Conner is back, and Jon has inherited the Superman mantle instead. Are you going to explore how Conner might feel having his “graduation” to Superman status robbed?

Tom Taylor: I’m not going to be dealing with it anytime soon. But also I believe Conner Kent is with the Suicide Squad now. So at the moment, he’s sort of spoken for. He’s off doing his thing, and we’re doing our thing. You know, if they meet at some stage, I think that’s cool. I think they’ll get along. There may be a story to tell there, but also we need to lift this Superman. We need to see who he is before we sort of muddy the waters with another one. And I have to say I’m a huge Conner Kent fan. I have been since the ’90s. 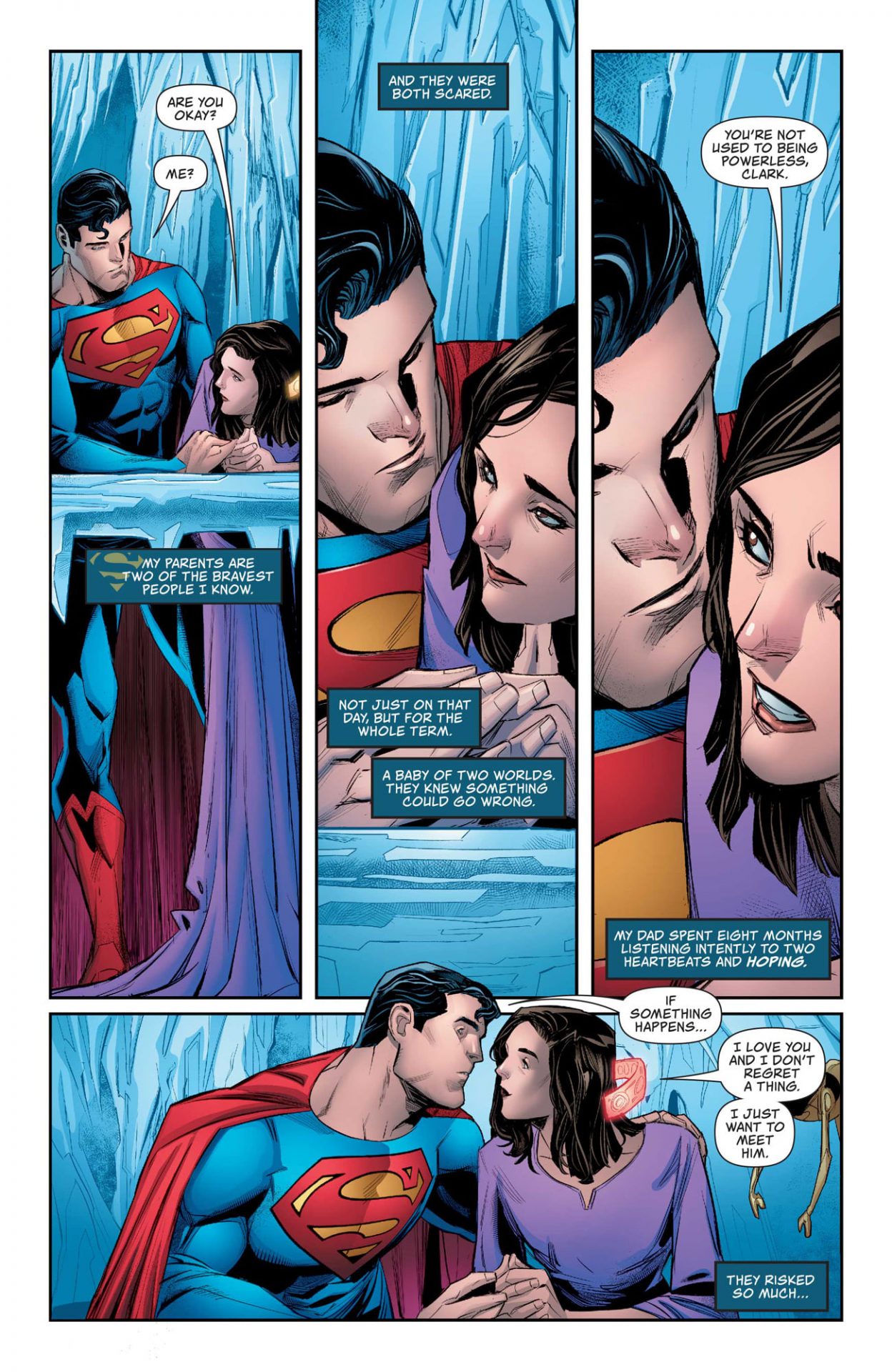 Nerdist: Clark Kent has one of the most famous supporting casts in comics history. Do you plan to give Jon the equivalent? His own Perry White, his own Jimmy Olsen, etc? Or will his supporting cast not be reminiscent of his parents?

Tom Taylor: No, not really. We have something that we’re building towards. Some very big things coming up for Jon, which we can’t discuss yet. But his cast of characters came partly from a plot point, and partly for what he needs in his life. The sort of friendship he needs, the sort of support he needs. It’s not just about “we need a Daily Planet.” We kind of have that in The Truth, but it wasn’t about that. But I don’t know if they’re going to be as iconic as Perry White, or Jimmy Olsen, or even as much as Bibbo Bibowski. He gets one very good friend very early on, by issue three. Someone that he can talk to, that can be a confidant like Damian Wayne. And they’re going to have a big role in this. 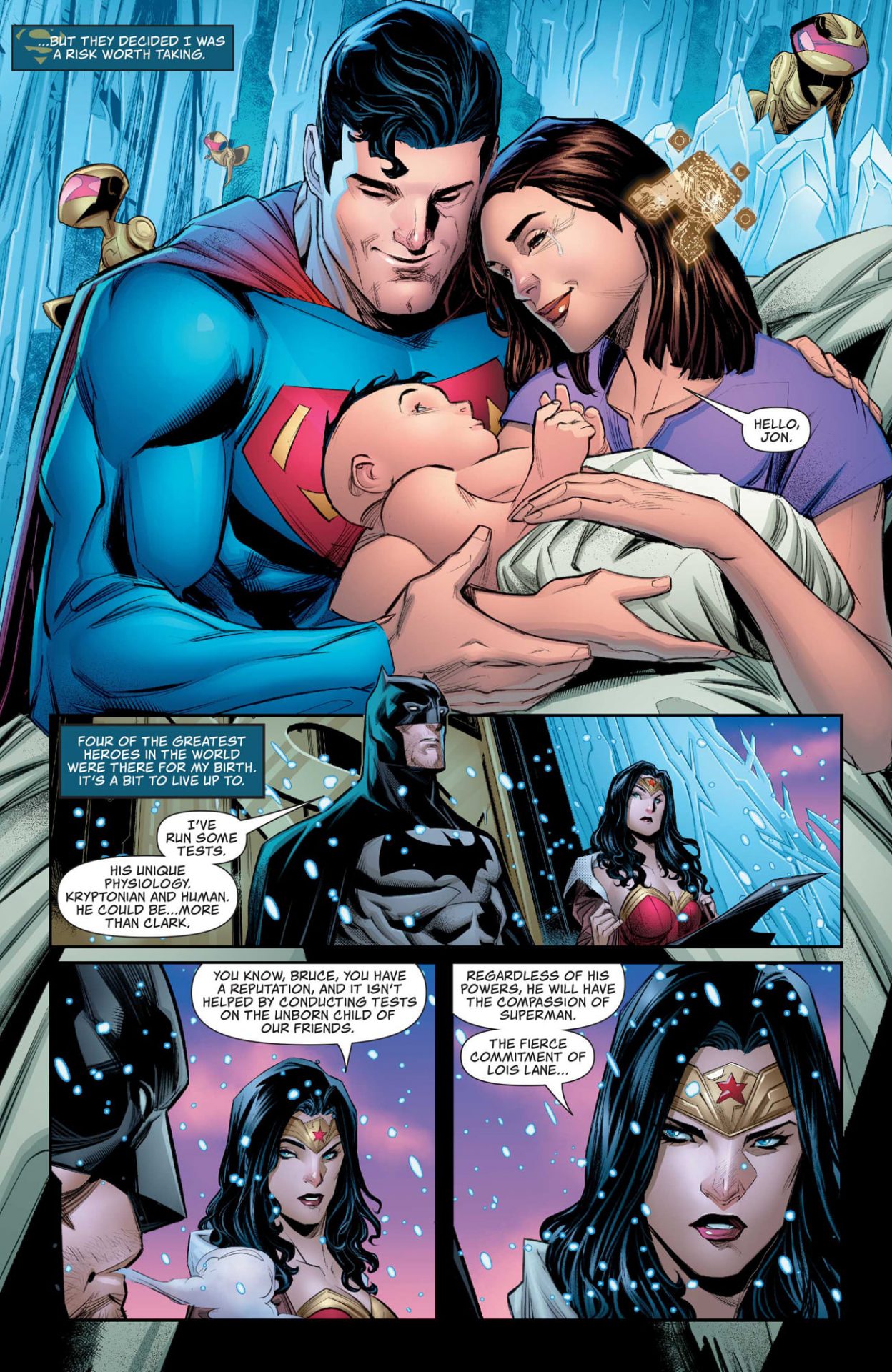 Nerdist: Jon Kent has had a very “soap opera” childhood. He was a baby for five minutes, then a pre-teen for years. Then he got whisked away by his grandfather Jor-El to space, where he aged up to a teenager. But in between all these moments, there’s a lot of missing history for Jon. Do you plan on exploring that in Son of Kal-El?

Tom Taylor: It depends on whether it serves the story. You know, if we want to say “yes, he was stuck in a volcano for ages. And that’s why he has difficulty with this or that,” then we will go there. But it needs to serve the story. And I think in issue one, we show enough of his character, of him as a person, and his beginnings, to hopefully get a new audience on board. All without saying “he’s lived in the future, kidnapped by his grandfather.” You know, all of these stories, they can get really convoluted. Part of my job was trying to find a way to just distill all that down and say join us in issue one, this is where we leap forward from.

Taylor is ushering in a whole new era for the Man of Steel, and it’s a job he’s been preparing for his whole life. He told the roundtable “I am a comic book fan, but in particular, I’m a fan of Superman. He’s been my hero from day one, for as long as I could possibly remember. The 1978 Superman came out the year I was born. And that was the first time I believed that a man could fly. I grew up with a single mother, and I grew up with him as a pseudo-father figure. So he meant a whole lot to me as a child. So I’m ridiculously honored to be writing Superman today.”

The first issue of Superman: Son of Kal-El, by Tom Taylor and artist John Timms, hits digital and comic shops on July 27.