Every Easter Egg from THE FALCON AND THE WINTER SOLDIER Premiere

Welcome back, Easter egg fans. After exploring the ins and outs of WandaVision, we’ve returned with a new MCU obsession. The Falcon and the Winter Soldier is here! Not only is it an action-packed exploration of the military side of the MCU, but it’s also filled with juicy references, spicy nods, and cheeky comic book history. And, of course, like an old friend forced into an exciting adventure, we’re here to break them all down for you. So let’s go!

Batrock is back, but what is the LAF? 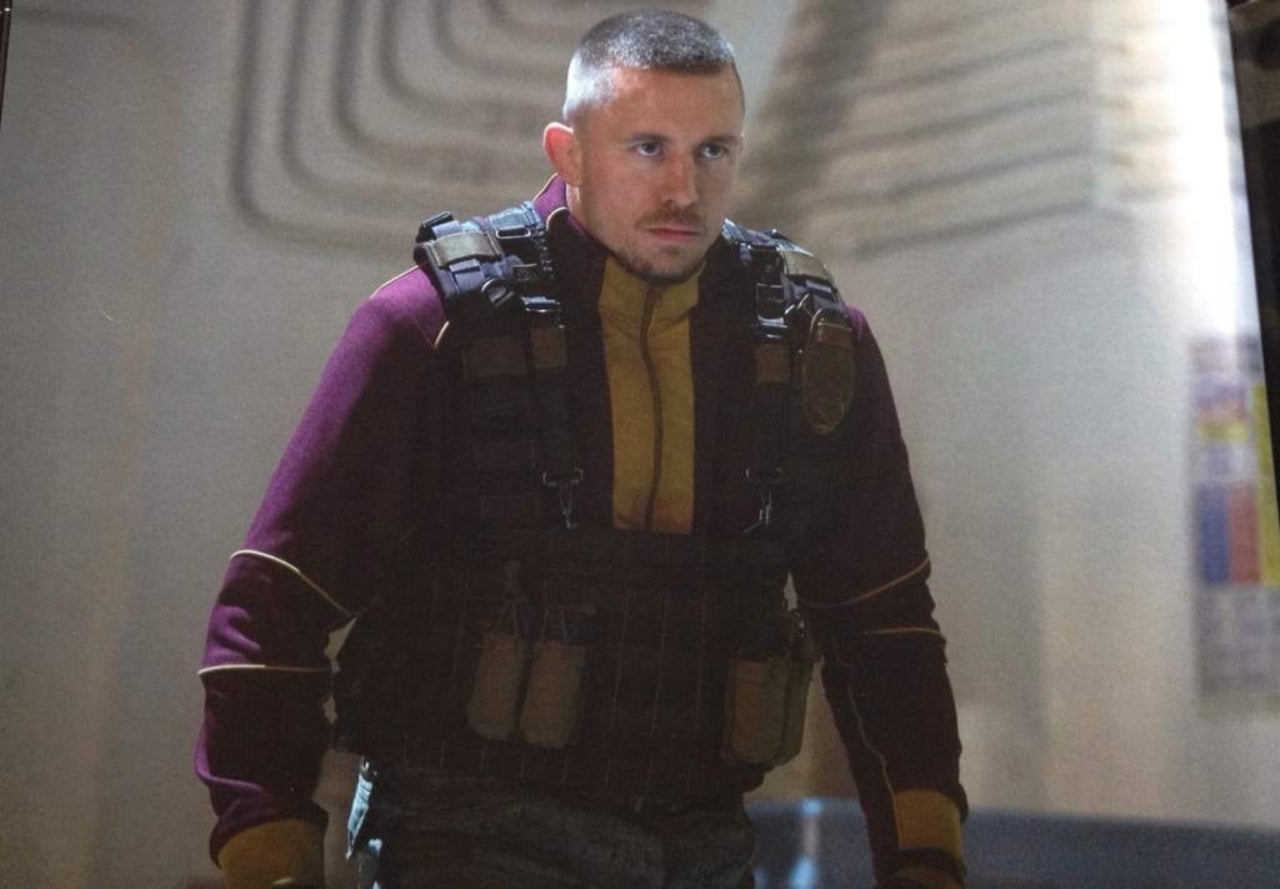 We begin with Falcon on an epic mission, hunting down a group known as the LAF. While there’s no comic book precedent for the name as far as we can tell, we do get to see Captain America and the Winter Soldier baddie Batroc back again. That implies that this is Batroc’s Brigade from Cap’s Silver Age comics. The squad also featured in Captain America #130, which is referenced in this sequence…

Before we get there, though, we see one of our favorite things: a computer screen. On the screen are the numbers 325, C-130, and 605. And guess what those all correspond with? Captain America comic books that could come into play.

Captain America #325: This is an extremely weird issue, featuring slugs and a “Slugfest.” But it does also feature the Jack Monroe iteration of Nomad. Although we don’t necessarily expect that version of Nomad to show up, we think the costumed identity might play a role in the future of the MCU TV series and could even be hiding in this show.

Captain America #130: This is a Captain America vs. Batroc issue! It’s a nice nod to the appearance of George St. Pierre’s hard-fighting baddy in this episode. Interestingly, this follows a nice trend from WandaVision of numbers preceded by the letter of the comic. So keep an eye out for further C-#s! This comic introduces the second iteration of Batroc’s Brigade, a team of mercs organized by the leaper… just like this episode, which features the second iteration of Batroc’s cinematic mercenaries! Another interesting note is that in the comics, Batroc’s Brigade is hired by “The Hood,” who’s later revealed to be Baron von Strucker. Keep that in mind as we try to solve the mystery of what Batroc was up to.

Captain America #605: This number corresponds with a very important arc that it seems will shape the series. It’s the conclusion of the Two Americas storyline. This arc also features backups starring Rikki Barnes’ Nomad, who could very well appear in the MCU soon. Not only was she a sidekick to Cap, but she also has connections to Flag-Smasher and other Falcon and the Winter Soldier folks. 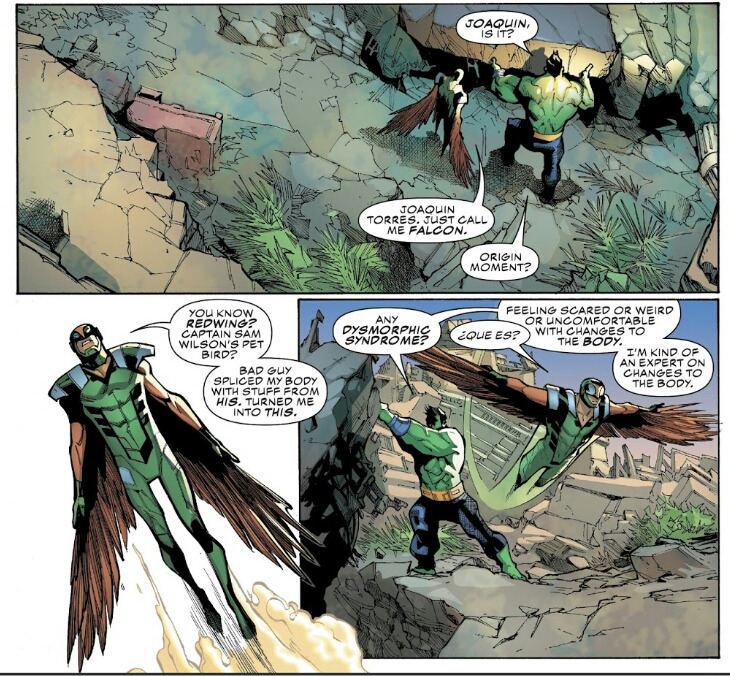 We meet Lieutenant Joaquín Torres early on here. It’s an important name as it belongs to the second Falcon. Created by Nick Spencer and Daniel Acuña, he fully first appeared in Captain America: Sam Wilson #3. While this could be a simple Easter egg, we think Torres will play a big part in the series going forward, especially as he seems to be a key player this week.

No One Can Escape Tony Stark

We get a little nod to Stark Tech here. A bank teller asks Sam whether he was paid by Stark. That thread will likely carry through The Falcon and the Winter Soldier as the show seems to want to explore how heroes are abandoned after they serve their country and government.

We get our first look at the villains known as the Flag-Smashers this week. They seem to be a combination of two groups from Marvel Comics: The Watchdogs, as evidenced by a Special Thanks to artist Tom Morgan in the credits; and U.L.T.I.M.A.T.U.M., the group that Flag-Smasher used to run. By looking at the credits we can see that Erin Kellyman is credited as Karli Morgenthau, which is a feminized version of the classic Flag-Smasher’s name, Karl Morgenthau. So you can expect her to be their leader… for now.

Captain America… on the Moon? 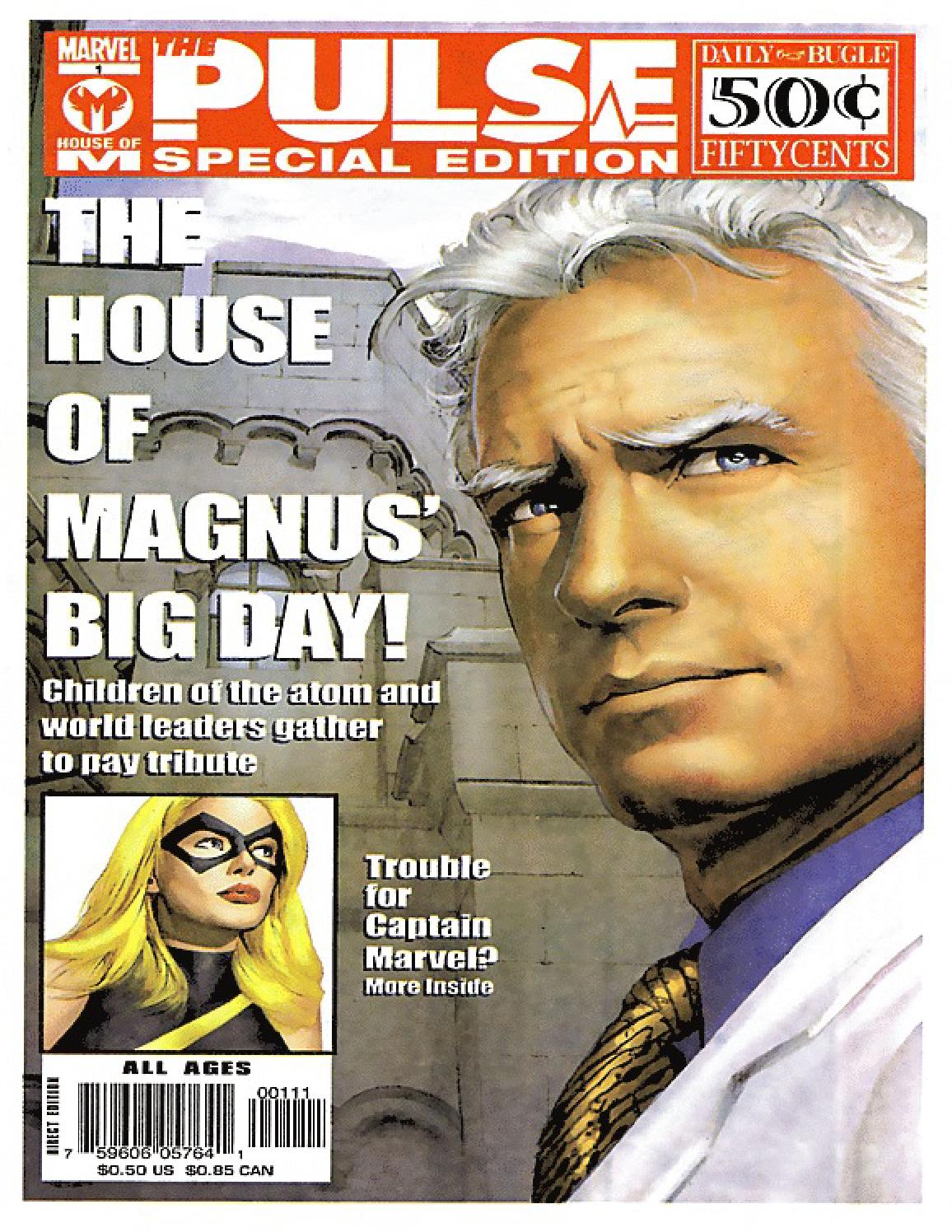 While catching up with Sam, Torres mentions that some people believe Captain America is living on the moon. This could be a super deepcut reference to a Marvel newspaper that you might remember from the ’00s. It was called The Pulse: House of M Special and sold for just 50 cents an issue. In this alternate reality newspaper, there’s a story about Cap walking on the moon. But this could also just be an Inhumans and/or S.W.O.R.D. base nod, too! Either way, send that Cap to the moon!

Don Cheadle makes a nice little appearance as James Rhodes. He walks Sam through the Smithsonian Museum’s Captain America exhibit after Sam gives up the shield. It’s a choice he’ll come to regret, and one that Rhodey doesn’t understand. Just like the rest of us, he wanted Sam to become Cap.

Captain America at the Smithsonian

Sam and Rhodey’s walk through the Smithsonian Cap exhibit features a lot of MCU nods—not just to Cap, but to his partner Bucky. We see both Cap’s old suit and the classic soldier suit Steve wore when he enlisted. There’s a dedication to Bucky, and an explainer of his time as an assassin, “Winter Soldier: From Friend to Foe.” We also get a reminder about the Nazis with “A Threat from Within: HYDRA.” Then there are exhibits about the Sokovia Accords and the split in the Avengers.

The Howling Commandos and The Captain 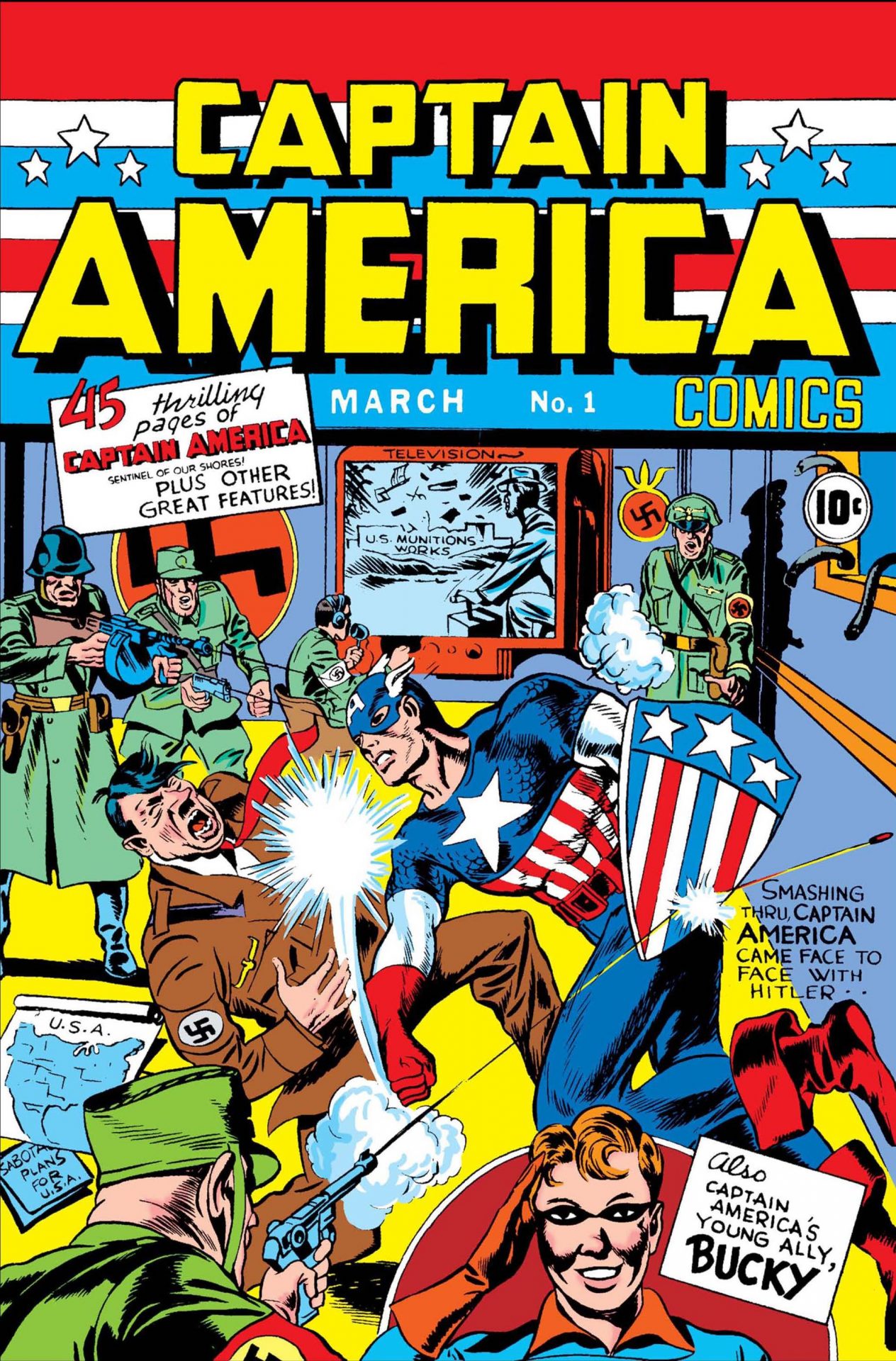 Some other little things to note from the exhibit… The Howling Commandos get a shoutout. It was the title of a classic Nick Fury comic, and in the MCU it was Steve’s original crew. They’ve featured in Captain America: The First Avenger and Agent Carter. During a bit of an info dump about his time as an exile, the exhibit calls Steve “The Captain.” It’s on the second Winter Soldier museum pillar. It’s a cool nod to his comics history as that’s what he was called when he renounced the title of Captain America in the ’80s comics and took on the black suit, which coincided with the government instituting their own Cap. Interestingly, a version of that suit would later be worn by that replacement, John Walker, when he became U.S. Agent. Keep an eye out for more on him later. For now though more comics…

We see the iconic Jack Kirby and Joe Simon cover to Captain America Comics #1 in the museum. You know, the one where Cap’s punching Hitler? Lovely! The comic sits alongside Cap’s original triangular shaped shield. We also see it again with all the propaganda from the First Avenger. Everyone loves Alex Ross! Here we get his painting of Cap standing on Hitler’s back, and we even get his signature! Love to see artists getting credit on TV shows, even if it’s unintentional!

Is Bucky Doing a 12-Step Program?

When we see Bucky in therapy, we get to see his “amends list.” While he and his therapist talk it over, if you pause—which of course we did—you can see a large list of names. And good news, Easter egg fans! Most of them are Marvel-relevant!

Let’s begin with H. Zemo. Why does Bucky want to make amends with him? This is intriguing and could likely lead into his role in the series going forward. In case you don’t remember, he was the villain from Civil War who will be returning this season with a comics-accurate purple mask!

Next up is L. Kaminski. This is a nod to Len Kaminski, a Marvel editor and writer who was the editor of the Jack Monroe Nomad series in the ’90s. He’s also the co-creator of War Machine. Most interestingly, however, is that he wrote a story in the 1991 Marvel Holiday Special anthology called “Precious Gifts.” In the story, Steve Rogers attends a Veteran’s meeting and accidentally bumps into Rebecca, who turns out to be Bucky’s sister that Steve never knew. This is yet another hint that we may well see Rikki Barnes pop up in this series, as her full name is Rebecca and her brother was none other than James Buchanan Barnes. Bucky does briefly mention his sister during his date later this episode too… 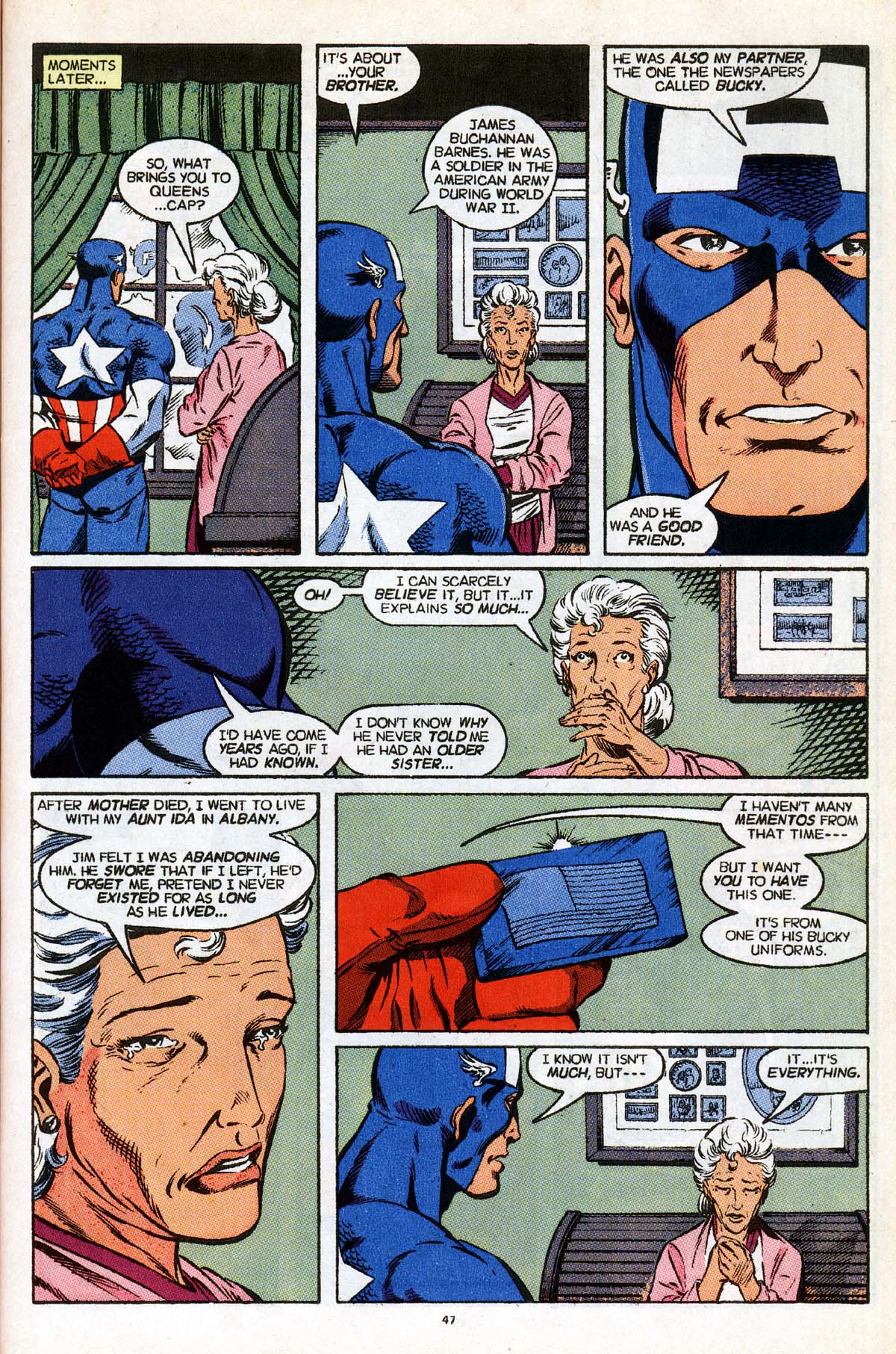 Then we have A. Rostov. Andre Rostov is a communist Marvel villain known as the Red Barbarian, who’s in the Winter Soldier comics. Fun fact: there’s actually two characters with this name, although the other one is Black Widow’s college boyfriend and probably less relevant. But maybe Bucky beat him up when him and Natasha were in Russia? Who knows!

If you’ve read the Sam Wilson Captain America comics, you’ll probably recognize H. Hauser. In the series, Harry Hauser is a scumbag talk show host who hates Sam Wilson and is a very public detractor of the hero. Why on Earth Bucky would want to make amends with him we don’t know, but there’s always the chance he hurt him for his horrible words about Sam.

Here’s a good weird one: C. Kuznetsov. This is likely Doctor Kuznetsov, the creator of Soviet robot Udarnik. The robot features heavily in the Iron Man: Fatal Frontier series. Random, but made relevant by this great Easter egg.

We didn’t recognize the other names and couldn’t find any Marvel or Winter Soldier relevance, but please let us know if you do! The other names in Bucky’s amends list are: F. Gannod, I. Tahlazar, H. Henrikson, N. Sari, T. Osman, and M. Kaminski.

We meet Sam’s family here as he heads back to New Orleans. His sister is named Sarah, which is the name that she has in the comics too. And the pair’s boat is named after their comic book parents, Paul and Darlene. It’s simple but good stuff. If you’re wondering about the seafood business, that is a new addition!

Time for a quick comics break 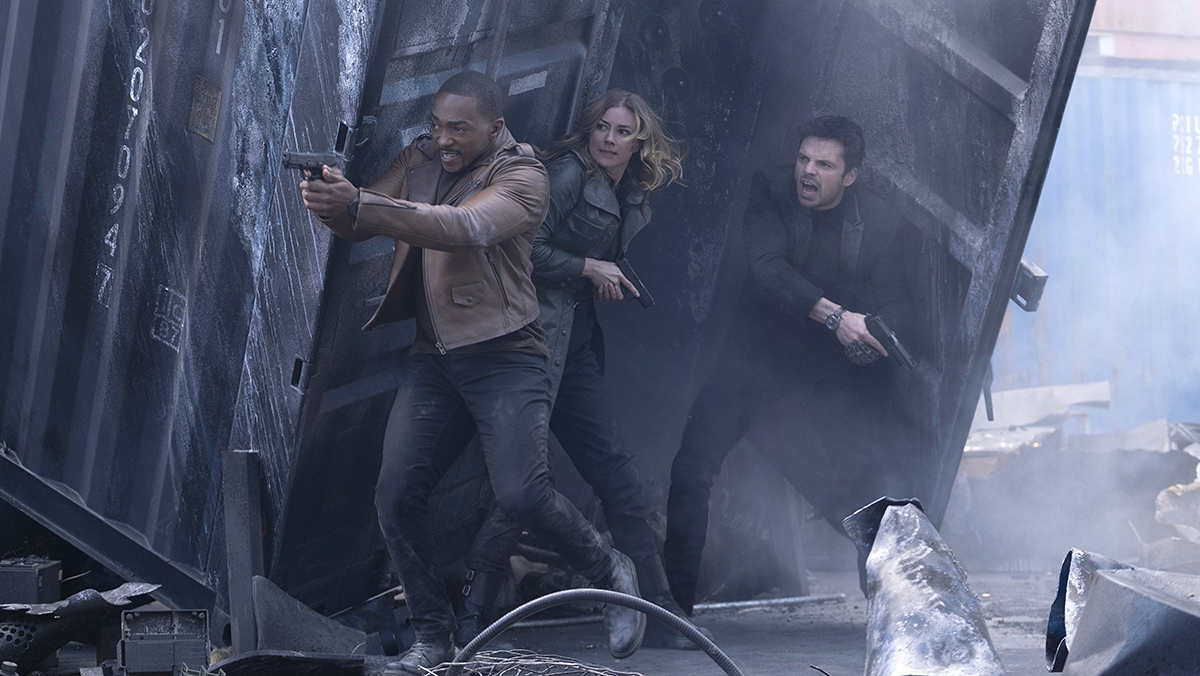 The license plate of Sam’s truck (seen after he and his sister leave the bank) shows a “184,” which is likely a ref. Captain America and the Falcon #184 also features the Howling Commandos’ Gabe Jones and Sharon Carter, whom we know will show up in the show going forwards. Prior to this issue, Steve renounced the title of Captain America and became Nomad, and this issue marks his big return to the mantle. This is notable as it’s another Nomad nod, and is about someone renouncing the Cap title and then returning to it, which becomes particularly relevant at the end of this episode.

A new era for Captain America… and it includes a gun

WHiH news network shows up as Sam and his sister watch TV. Surprising probably no one except for Sam Wilson, the Department of Defense announces the new Captain America. It’s John Walker (who we later know as U.S. Agent) and he’s got a freaking gun! Terrible times. Wyatt Russell really is perfect casting though. Can’t wait to see him in action as the series moves forwards. For now, we’ll have to leave Sam and Sarah as they deal with this harsh new truth.

The Falcon and the Winter Soldier hits Disney+ each Friday.