EVENT HORIZON Has Aged Like a Fine Soda - Nerdist

Space scares me. Like, a lot. The vastness, the quietude, the absolute deadliness of it all terrify me. That’s all before you factor in the unsettling supposition that there’s something, maybe tangible, maybe not, out there. That’s the basis of all cosmic horror; something bigger than us is out there and it doesn’t care at all. In recent years, there have been some truly excellent cosmic horror movies that really get the tone right, and most of them owe a debt to Alien. The trend lied fallow for many years, though, and the closest we got was 1997’s Event Horizon, now available in fancy Blu-ray form from Scream Factory. Revisiting, it feels like it misses the mark even more so than it did all those years ago.

Now, before I get too far ahead, I want to say up front that Event Horizon is still an enjoyable enough ’90s horror flick. It’s got some great production design, some gnarly moments of gore, and an outstanding performance from horror hero Sam Neill (more on him later). I also fully acknowledge all the studio meddling that went on and that Paul W.S. Anderson’s lost director’s cut material would have helped a lot. Finally, I will also not judge the movie on some of its dodgier CGI which has not aged well in the least.

I think ultimately Event Horizon has aged like a fine soda. While sugary and exciting when brand new, after almost 25 years, it’s just a bit flat. The fizz is gone. And I think that’s largely because we’ve had a quarter century of better explorations of those themes. Event Horizon couldn’t decide if it was going to be H.P. Lovecraft, Shirley Jackson, or Clive Barker. There are aspects of each in the bones of the movie, but it becomes too muddy for any of them to properly land. And any one of them would have been just fine. 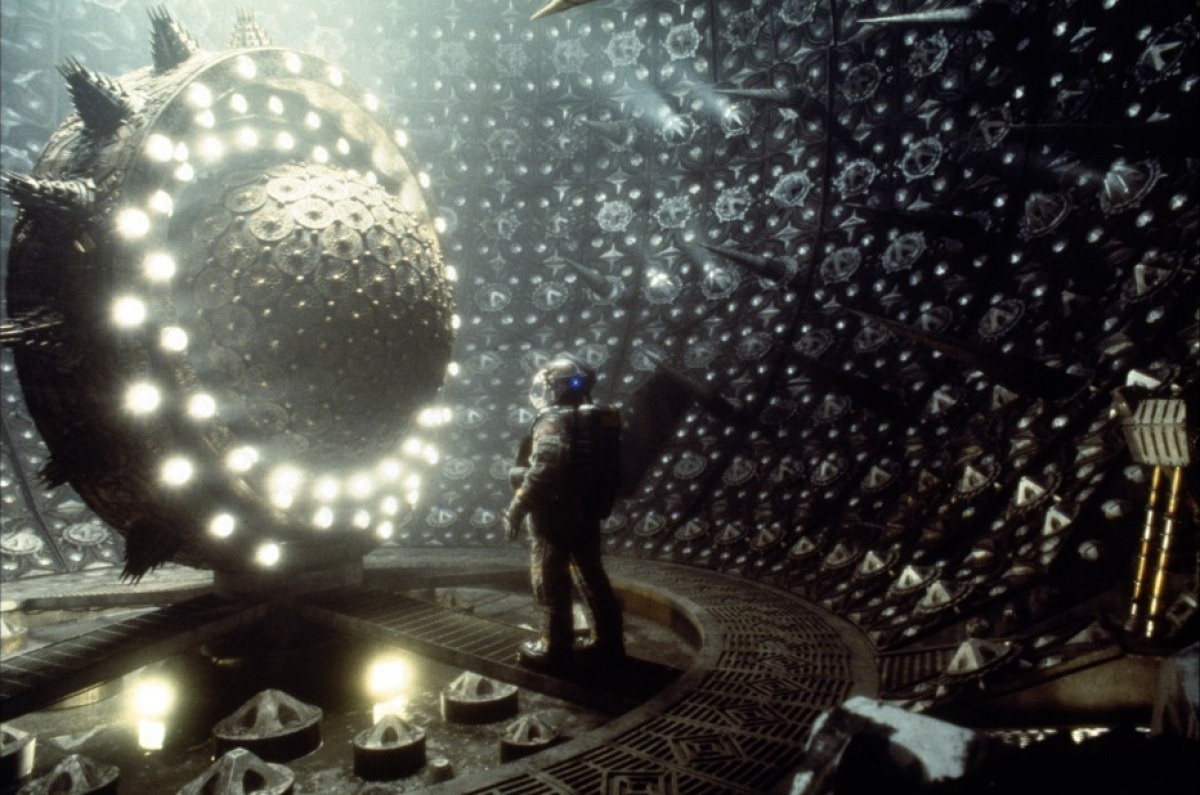 The basic premise is pretty close to perfection. In the future, when humanity has populated the solar system, a crew of explorers are pulled off a much-deserved leave to head out to Neptune for some reason they don’t quite know. The outsider among them is Dr. William Weir (Neill) who tells them they’re supposed to search for the titular ship, Event Horizon, which has been missing for seven years. Weir helped build the Horizon and explains that it’s a secret project with the first faster-than-light drive. He then explains wormholes using the same magazine/pen analogy we saw later in Interstellar.

But when they find the massive, derelict cruiser, they find no signs of life. But the core FTL drive, a spinning, spiky monstrosity at the end of a hallway full of more spinning spikes, suddenly comes online and pulls one of the crew members into it. Where has the ship been for seven years? Where is the original crew, dead or otherwise? And where did Ensign Justin (Jack Noseworthy) go when he flew into the drive? 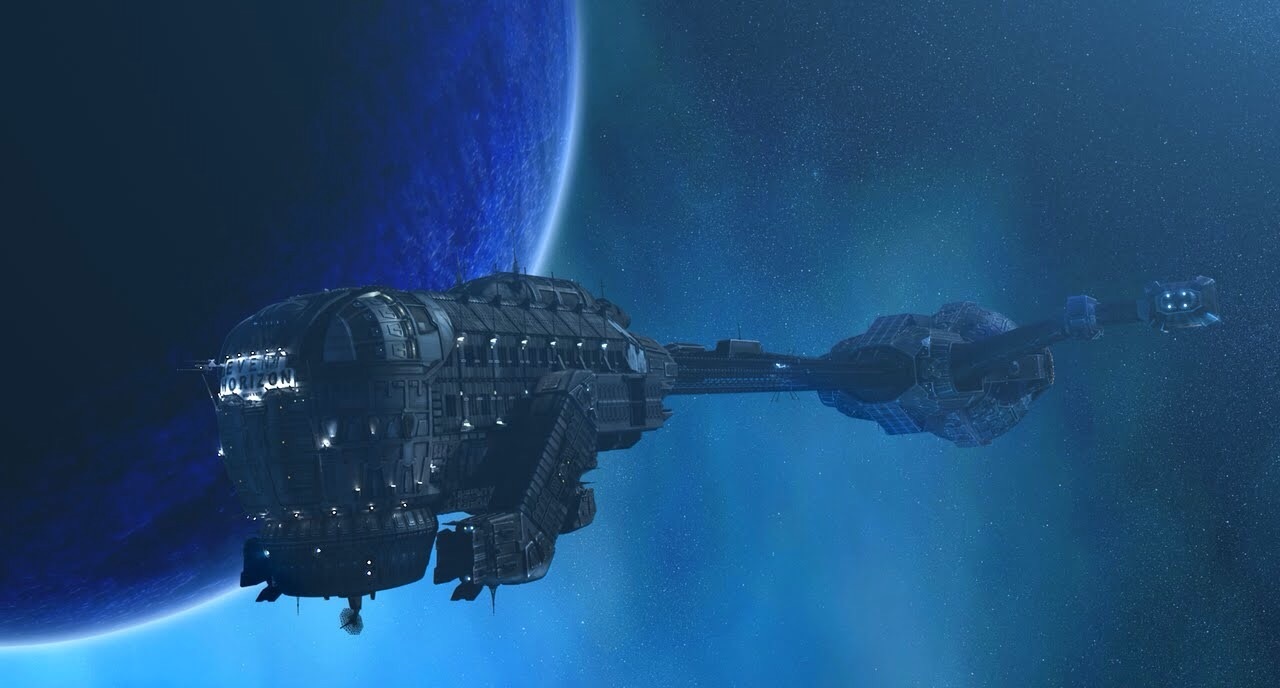 It’s a truly terrifying, and absolutely Lovecraftian, conceit. By messing with the laws of nature, the Event Horizon tapped into something ancient and unknowable. Something that seemingly drives people mad and enlists them to do its bidding. The voice from another world tempting, pushing them to do evil. Weir is especially susceptible, and it’s implied he’s somehow connected to the ship even before he boards it. Perhaps tapping into those forces to create the drive opened him up to these evils from the jump. That’s very Lovecraft.

But it also works as a typical sort of haunted house narrative with the ship standing in for a Gothic manor. Everyone from the Lewis and Clark who comes aboard the Event Horizon deals with some kind of nightmare, usually stemming from guilt or grief, even if we don’t see it. For instance, Captain Miller (Laurence Fishburne) sees visions of his friend who burned to death on a mission many years before; Medical Tech Peters (Kathleen Quinlan) sees visions of her disease-afflicted son whom she left with her ex-husband for this mission; Dr. Weir sees visions of his wife who died from suicide many years before.

The ship itself uses these visions to try to entice the crew members to join it. But the reality of what happens in the other wormhole appears, just in brief, music-video-edited snatches in a garbled message: it’s a kind of hellish orgy of flesh and violence. This is where the Hellraiser bits come in. Everyone seems to either maim their own eyes or completely remove them. Some bodies are cut up and displayed while other people scream incoherently. One of them begins speaking Latin; at first the mysterious medical doctor D.J. (Jason Isaacs) believes it to be the phase “Save me,” but later realizes it “Save yourselves from hell.” It’s explicitly religious in a lot of places, directly implying the Christian definition of Hell.

We never fully find out what’s going on, which is honestly absolutely fine. Horror of this sort should be ambiguous. I also really love that there’s no “monster” for the crew to fight. The threat is the ship itself and what it can do to the minds of everyone around it. But it’s not the only threat; there’s a time crunch, with the Lewis and Clark breaking down and only 20 hours of air left before everyone suffocates. That’s what keeps them in place.

Philip Eisner’s screenplay does a really smart thing with the character of Dr. Weir. We start the movie with him; he’s the one who gets the first vision, he’s the archetypal outsider figure, and he’s the one with ties to the ship. But then about halfway through, Weir becomes the villain. The Event Horizon corrupts him and he’s the threat, even maiming himself to reflect the ship’s darkness. It’s a great turn, and one that is perfect for Neill, who’d just starred in John Carpenters In the Mouth of Madness two years before.

So aside from the muddled horror, the main problem with Event Horizon is everybody who’s not Sam Neill. The entire crew of the Lewis and Clark feel like rejects from James Cameron’s Aliens. They spout clichés, crack very unfunny jokes, weirdly call each other by name every sentence. It grated on me to a degree that surprised me. They really wanted everybody to seem super badass, but that’s not a good trait if it’s not an action movie. Sure there’s action in by the end, but the thrust of the entire movie should be scares. Anderson, in turn, shoots most of it like an action movie and not a horror movie; it’s a trend he continued in all of his Resident Evil flicks. 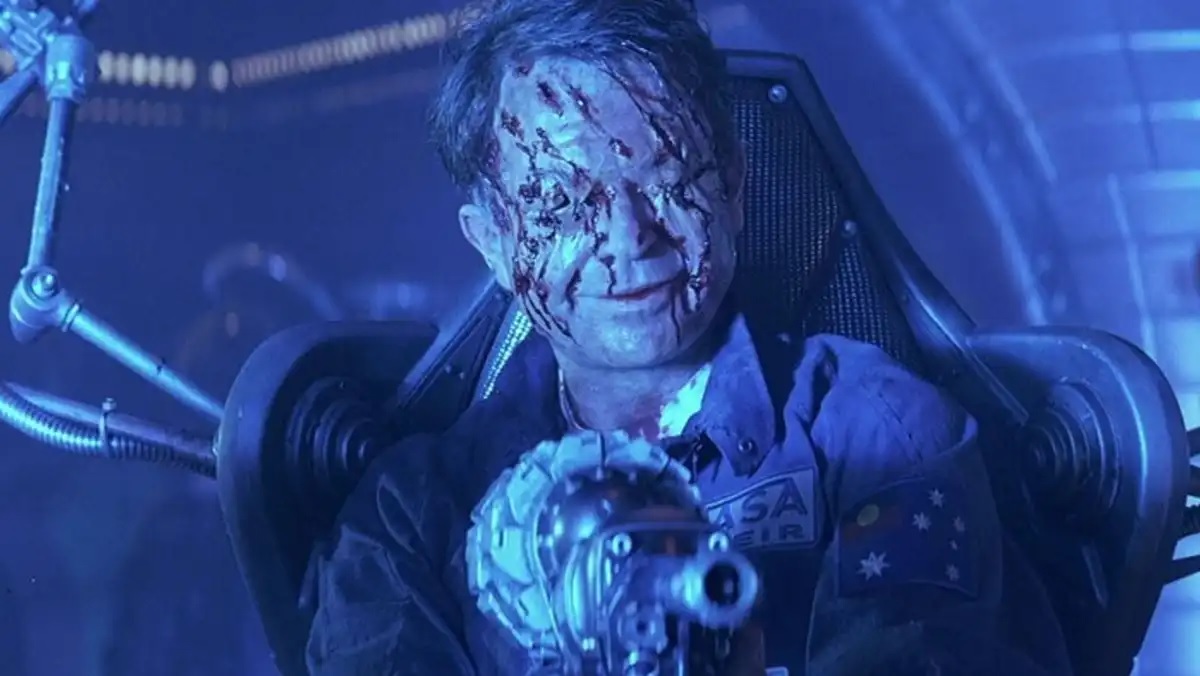 The lone exception is Quinlan’s quiet, mournful Peters who truly feels like is in a different movie. Or, more accurately, it feels like she and Neill are in the correct movie, though she is much more a blank slate, and everyone else is in the wrong movie. Even Jason Isaacs, who can do no wrong (hello to Jason Isaacs), is somehow both the ship’s most intellectual and most mysteriously dangerous. Maybe if there were fewer characters, it’d feel more balanced, but there are just so many of them. And don’t get me started on Cooper (Richard T. Jones), the Black stereotype comic relief. The ’90s have a lot to answer for. 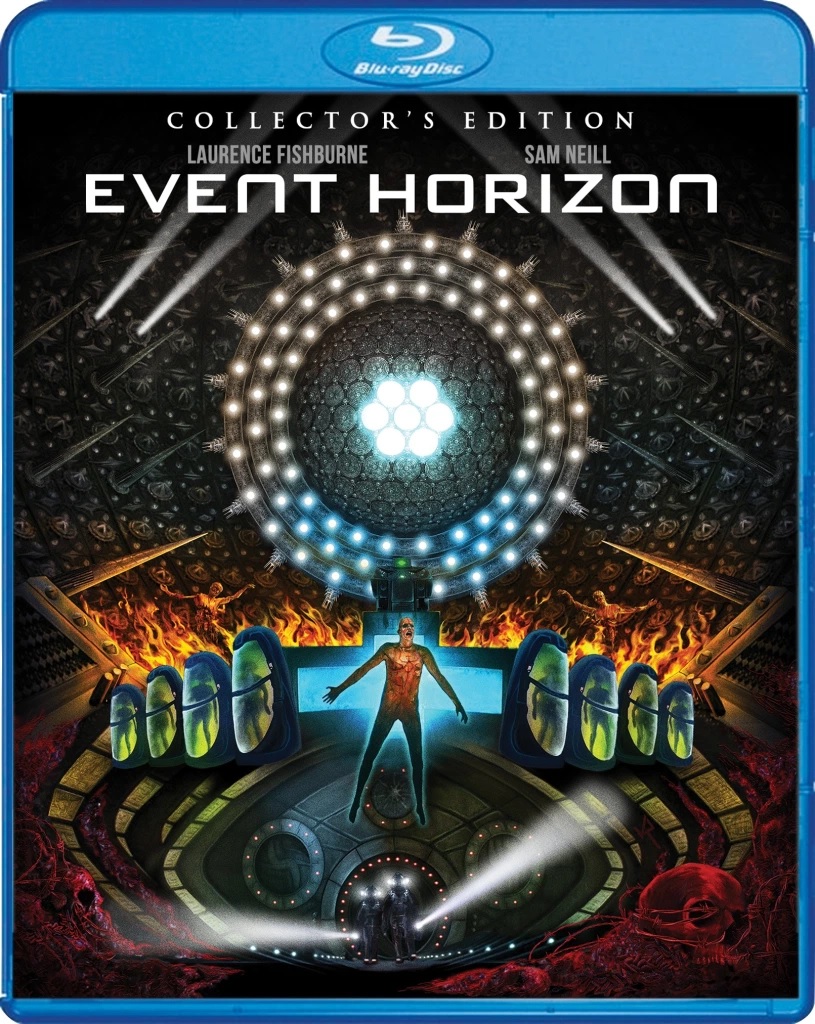 So while the bones of Event Horizon are rich for exploration, the actual finished product just leaves too much on the cutting room floor. Moments work, visuals work, but it gets too lost in that late-’90s aesthetic and action movie tropes to be truly effective. And for a while, that was okay. But when we’ve recently had explorations of the themes done so much better in movies like Annihilation, The Endless, and The Void without needing to go to space, it just feels like too much is left adrift.