Every October the same handful of Halloween kids’ movies dominate television schedules and social media. Hocus Pocus will air roughly 37 million times this month. I will also be reminded ever day I’ve never seen Halloweentown. And soon even movies I enjoy, like Casper, or outright love, like The Nightmare Before Christmas, will feel like overplayed pop songs. And yet, despite a dearth of true spooky season family staples, my favorite kids’ Halloween film never gets a fraction of the love and adulation it deserves. Thirty years after it came to theaters, Ernest Scared Stupid has become the season’s forgotten classic. A title an overdue re-watch proves it clearly deserves.

I was the exact target audience for Jim Varney‘s Ernest P. Worrell when the character made the move from television to the big screen. I already loved—LOVED—Ernest and his whole weird family. (All played by Varney). Him starring in actual movies just confirmed what young me already suspected: Ernest was the biggest star in the world and everyone knew and loved him. That might sound absurd, but for my generation Ernest was basically an eight-year-old’s Jim Carrey long before Ace Venture.

Varney’s face was seemingly made of clay. Able to contort into any ridiculous shape it needed at any moment. He could also seamlessly drop in and out of any voice he wanted. With different pitches, accents, or speech patterns, each funnier than the last. And those skills let him inhabit any character he played, which is why his whole cadre of Worrell family members always made me laugh. As they do in Ernest Scared Stupid. 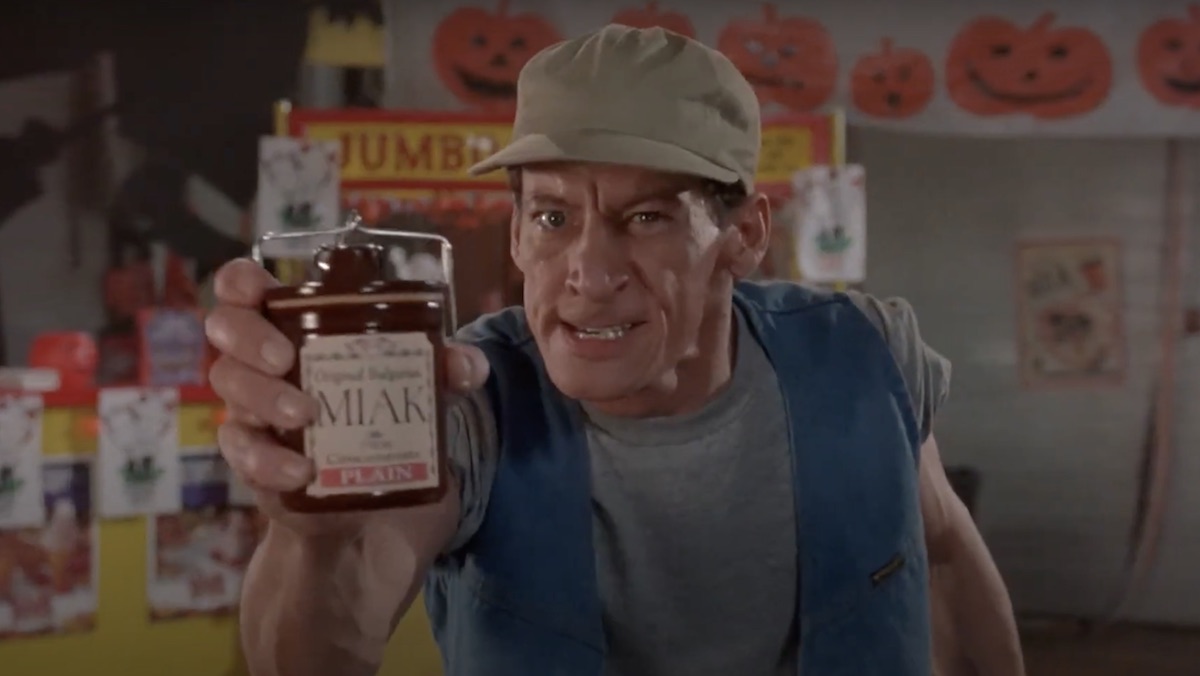 It should also never be forgotten that the late Jim Varney was a master of physical comedy who never shortchanged a gag. He always gave his all, no matter the film or scene. Ernest was, fittingly, totally earnest. Both the actor who brought him to the life and the dumb, eminently likable character he played. That’s what really made Ernest the best. Kids always know when someone is being sincere with them. Just like they always know when someone, or some movie or show, is condescending to them. Varney always treated his young audience with love and respect.

Everything that made Ernest a special character is on display in Ernest Scared Stupid. (Which, it should be noted, is a fantastic title.) He’s caring, equal parts brave and cowardly, emotional without reservation, and, most importantly, impossibly funny. Watching this movie now it’s obvious Jim Varney’s own deserved place as a great comedic actor has also unfairly faded with time. 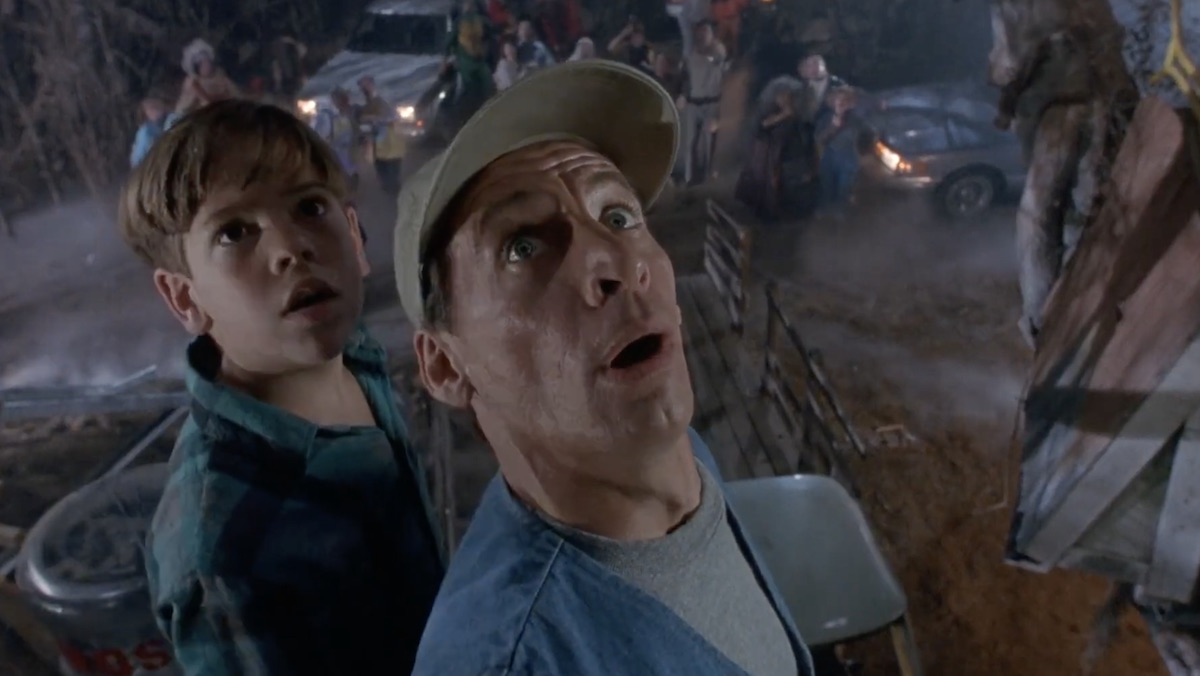 But those thing were always true of Ernest P. Worrell. Yet, not every Ernest film deserves the title of “classic.” The reason his Halloween entry should be included on the short list of annual fall season screenings is that it also has everything you’d want from a kids’ Halloween film.

Ernest Scared Stupid is funny yet sweet, scary yet hopeful. With a story directed for a young audience. (Though Varney’s performance alone makes it a worthy comedy even for adults.) The film also touches on timeless themes of family, friendship, and community. But it never feels saccharine or patronizing. In large part because it also does the best thing any kids’ Halloween movie can do. When I was young the movie scared me stupid. It features a terrifying monster. A monstrous troll brought to life with an amazing practical costume and not CGI, which is always much more frightening. That old beast turns children into wooden toys. And that’s not merely an idle threat. 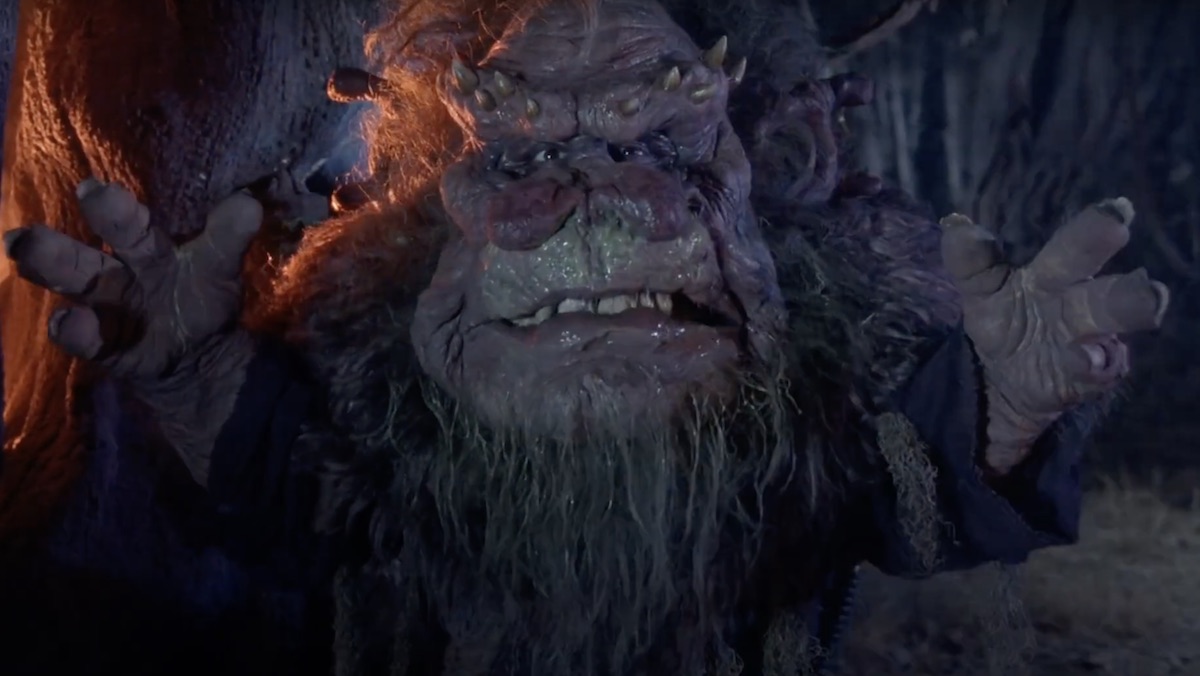 Throughout the film the troll hunts down children like the kind of predator all kids learn to fear. He plucks them from the street. Traps them in dark and scary woods. And he even kidnaps one girl from her bed. A scene that almost certainly traumatized every kid who ever worried a creature lay hidden under their mattress.

The troll needs five children to birth its seedlings. Often in kid’s horror-comedies the threat of something even worse than what’s already happening is just that – a threat. Not something the big bad will be able to actually achieve before the heroes save the day. But not in this movie. That world-ending danger becomes reality, as countless trolls (all in their own unique costumes) come to life and go on the attack.

Which all leads to a truly great ending, as Ernest saves the day. Not like a conquering warrior though. But as the big dumb sweetheart he is. Why fight a troll when you can show him unconditional love? It’s a perfect conclusion for the film, which also sees Ernest have a tear-filled reunion with his dog Rimshot. A scene that still hit me right in the heart. Just like it did the first time I saw it as a second-grader.

That was a sensation I felt throughout my entire re-watch for the film’s thirtieth anniversary. Three decades after it premiered, Ernest Scared Stupid still hits all the right notes. Like how I couldn’t stop laughing when an oblivious Ernest couldn’t figure out the missing letter in the troll-killing secret weapon. I don’t care how old you are, Ernest threatening a monster with “Miak” instead of “milk” is a flawless, timeless gag. As is the great Eartha Kitt’s performance as the town’s wise, old, strange denizen. And the film’s iconic kids’ fantasy tropes of making amazing contraptions, building an awesome treehouse, and facing down scary monsters.

Ernest Scared Stupid, starring a beloved character played by a great performer, was a perfect kid’s Halloween movie when it came out. Three decades later that’s still true. We shouldn’t forget that every October, so it can be remembered as the classic movie it is. KnowhutImean?