It is a great time to get into tabletop RPGs. The current edition of  Dungeons & Dragons is popular, accessible and has tables all across the world seeking out new players. Actual play shows and podcasts are breaking down the barriers of entry by showing how people play all sorts of games. A fertile recruiting ground for people interested in tabletop RPGs can often be found in friends who love board games. One of the best games of the year combines these two elements; a role-playing game easy enough to teach beginners in a package that’s handsome enough to sit on a shelf of big, beautiful boxed board games.  Dusk City Outlaws from Scratchpad Publishing gives new players a lovely sandbox full of fantasy capers to play in with a box full of great tools to play with. 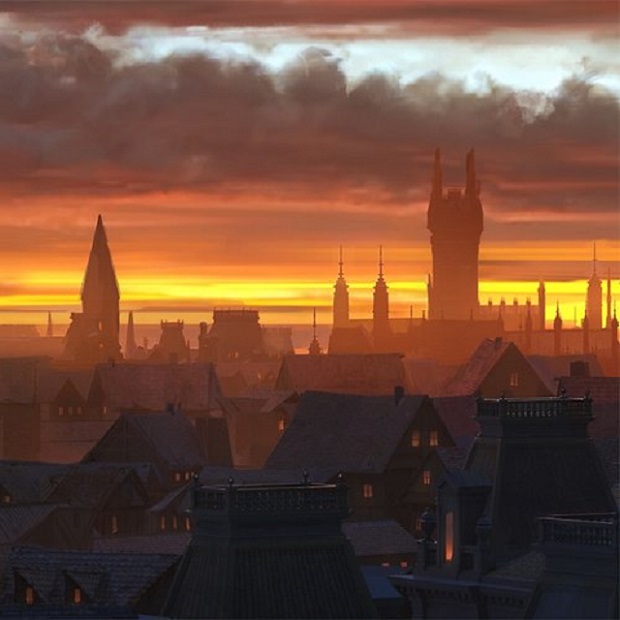 Dusk City Outlaws offers a light fantasy setting viewed from a different angle. Rather than adventurers heading out into the great unknown, players are cast as scoundrels working in the city of New Dunhaven. Each player hails from one of the several criminal cartels running the black market in the city that have been put together as a crew to pull off a job. These jobs are often classic heists with a fantasy twist, such as breaking into a vault protected by clockwork guards or stealing an alchemical formula from a wizard’s library. The game alternates between planning scenes, where the players discuss the obstacles between them and the loot and the legwork scenes where the players try to take out those obstacles or acquire the tools they need for the final heist. Every game ends with the tense final scene where the criminals put their plan into action, grab the goods and get paid.

The game’s structure offers simplicity from the get-go. Character creation features three choices for the players to make; the cartel the player belongs to, the role the player serves on the team, and a quirk that gives the character a little bit of personality. The system is a roll-under percentile system with a slight twist. A player’s chances of doing something generally stays the same, but can be modified by boost or obstacle dice in the roll. Rolling boosts gives the players little extra advantages on future rolls, such as inside info or a little extra damage on their attack. Obstacles provide the opposite by showing the things that don’t quite go as planned as things often do in these stories. Players use their Luck to push their rolls to success or reflect avoiding problems they might cause. When they start getting hurt, it’s because their characters have literally run out of luck. The rules are light enough to explain in just a few minutes but still offer flexibility in play for narrative choices and unexpected outcomes. 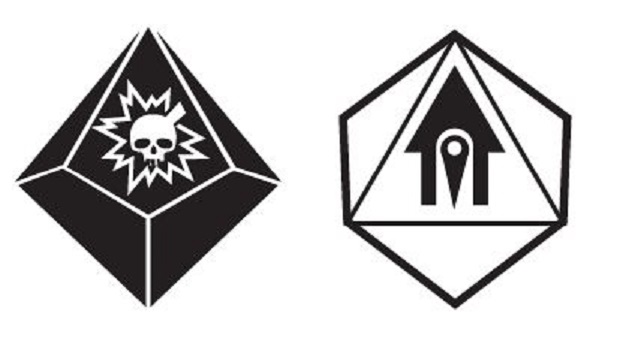 The Judge (the game’s term for a Dungeon Master) also gets a bit of structure to play with. Each job is split into a series of day and night segments. Players can either use a segment planning their next move or executing their plans. As more and more segments pile up, the crew acquires Heat, which reflects all the small imperfections of their plan drawing the attention of the authorities. The Judge can spend these points of Heat to increase the difficulty of the legwork the players do by throwing more obstacles in their way.

The Judge can also save that heat to pull off a Plot Twist, where something completely unexpected happens during the final heist. Perhaps a rival crew shows up at the same time or there’s an exact copy of the necklace in the vault and there’s not enough time to figure out which one is the authentic one. These tools are great for people who have never run a game before by teaching pacing and control. The jobs included with the game box are written as a series of bullet points that provide flexibility to the Judge while also providing the background needed to inspire on-the-fly reactions to the over the top plays players often create. 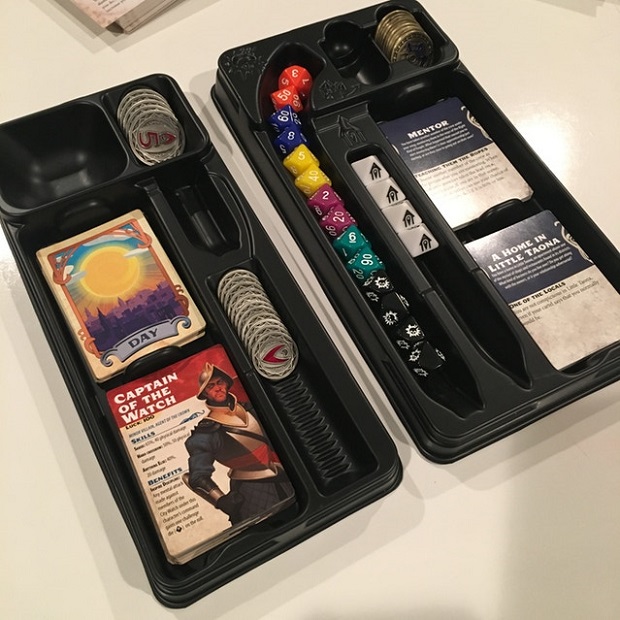 The boxed set supports the rules with a handsome set of components organized with a pair of stunning in-game dividers. Cards help keep track of the day and night segments and also provide several adversaries for the players to overcome. There are three books included; one with player rules, one with Judge advice and a dozen jobs ready to play out of the box, and a Traveller’s Guide to New Dunhaven full of information on the setting to help Judges create their own jobs. There’s a set of dice for each player and tokens that represent Heat that offers a visual cue to players on how bad things are getting on their job. In addition to the materials provided inside the box, Scratchpad Games offers upgraded components available through Campaign Coins and additional jobs created for the Kickstarter available through DriveThruRPG. Scratchpad also recently released a supplement aimed at Judges who want to run a campaign where their rogues are trying to spread their influence throughout the city.

Setting up for a session of Dusk City Outlaws often feels like the setup to another excellent RPG gateway:  Betrayal at House on the Hill. The players take a few moments to put together their characters, the Judge flips through the Jobs to choose one that seems fun and the table is off without the common difficulty of getting everyone hype to play an RPG and then spend hours filling out character sheets. The rules and setting are light, allowing for games that feel like a mixture of Lord of the Rings and Ocean’s Eleven right up until the Heat comes down. More experienced groups will also find several optional rules and settings that will adjust their experience to the level of complexity they desire at their tables. Dusk City Outlaws may have come together to steal jewels or gold, but it would not be a crime to let it steal some time at your table this year.