You know, just when I think the internet couldn’t possibly be any dumber, it goes and does something like this….and totally redeems itself! Two motorcycle enthusiasts—and major Dumb and Dumber fans—recreated Harry and Lloyd’s cross country drive to Aspen. All on a replica mini motor bike.

And yeah. Turns out it really is smart to have an extra pair of gloves in the Rockies.

Zack Courts and Ari Henning of RevZilla’s Common Tread took their intense love for Jim Carrey and Jeff Daniels iconic comedy on the road. The pair recreated Harry and Lloyd’s absurd trek to Aspen they embarked on in the 1994 film. The CTXP team’s endeavor (which we first learned about at Laughing Squid) included building a “street-legal” replica of the same tiny motor bike the duo rode in the movie.

Based on evidence in the film, they also calculated the most accurate time period to leave Nebraska for the famous ski center. They calculated that to be mid-April. That way they’d leave in t-shirt weather like Harry and Lloyd in the film. But arrive in Colorado’s Rockies with time to feel the chill. 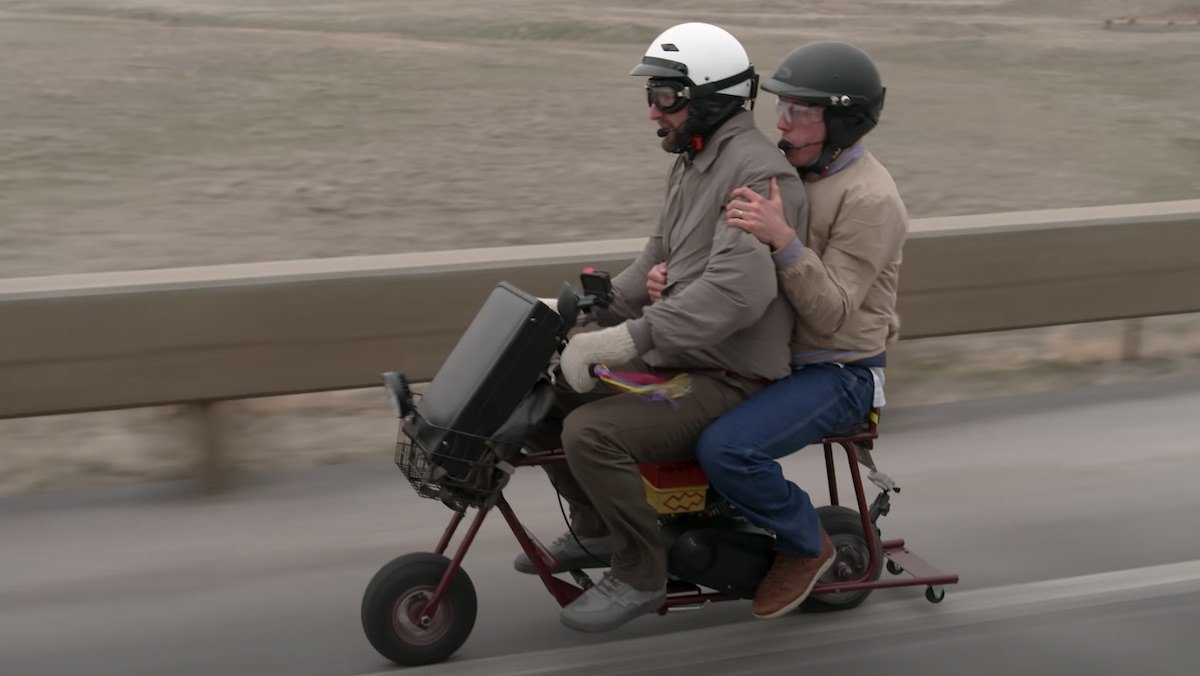 And freeze they did. Even with layers and warm clothes, it was a cold journey. Driving thousands of feet above sea level into snow-covered mountains isn’t easy under the best of circumstances. And the little bike meant this was far from the best circumstances. Even when they changed fuel to increase their top speed from 29 mph to a whopping 35. Here’s what Courts said in his fantastic full account of the journey:

“The rider triangle is more accommodating than it looks, thanks to Ari stretching the frame to match the movie bike. The seat, on the other hand, is worse than it looks and the paint-shaker vibration rattled our joints to numbness. Ari had predicted that the novelty of the bike and the journey would wear off after about 15 minutes on the road, but I’m not sure it even lasted that long. It was overcast and frigid, with no scenery in any direction. We rode along miles of barbed-wire fence, punctuated occasionally by a gate or a sign warning us not to trespass. On some motorcycles, the thought of open pasture might be appealing, but aboard our hog it was exciting enough just staying on the straight and narrow.”

After two days Courts said they “were either mastering the technique or learning to accept the punishment,” as the uncomfortable setup “almost felt normal.” Either way, they finished. In the end they drove “382 miles and burned seven gallons of gas; plus two and a half rear tires.”

Was this dumb? Yes. I know I wouldn’t want to make this trip. But I’ve seen dumber stunts. And most of those weren’t nearly as fun to learn about.