It’s that time of year again when people descend on San Diego like hordes of insects to partake in celebrating the stuff they love in the form of watching panels, waiting in line, cosplaying, and picking up the kind of swag you can get nowhere else but there. When it comes to Doctor Who stuff, not only are the BBC’s wares exclusive, they’re the first of their kind. Since her brief appearance at the end of “ Twice Upon a Time” last Christmas, and a few official images and posters, Thirteenth Doctor Jodie Whittaker has appeared in no official capacity on anything, so these are the first toys of any kind for Jodie Whittaker’s Doctor.

The first is the latest in Titan’s long line of facially accurate Doctor figures, with a fabulous likeness of Whittaker herself sporting her blonde hair and sky blue lilac jacket. Second is a Thirteenth Doctor in the Kawaii style, which is sort of anime-inspired. Both look fantastic and stand 6.5″ each. They will debut at SDCC 2018 in the BBC Shop at BBC AMERICA booth #4129 and at Titan Entertainment booth #5537. Following Comic-Con, remaining supplies of both TITANS will be available to buy at Hot Topic and shop.BBC.com in the U.S. and from Forbidden Planet in the UK. Pending availability, pre-order for these opens after the close of SDCC 2018 on Monday, July 23. 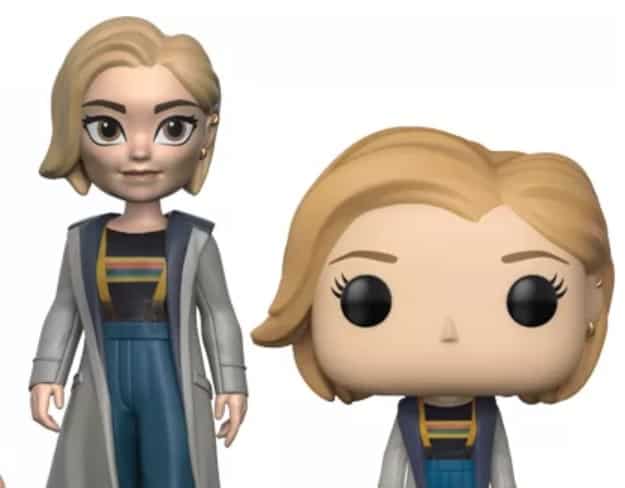 Next up are the Doctor Who Funko figures (you knew there’d be some). We have the coveted Thirteenth Doctor POP! vinyl figure, as well as the Rock Candy brand variant. These will be available at the BBC America booth as well as at Funko booth #5341/5347, and in retail in both the U.S. and UK this fall. A new Doctor also means new costumes and Her Universe is debuting the Thirteenth Doctor’s fashionable rainbow striped top, long coat, and blue trousers, which will be available at the Her Universe booth #1321 and later in the fall at Hot Topic stores in the U.S.

And for those of you who aren’t going to be at SDCC and still want a Thirteenth Doctor before autumn, Character Options–who’ve been the home of Doctor Who action figures for a long time–have begun pre-orders for a Jodie Whittaker 10″ action doll with fabric clothing, full articulation, and an unseen sonic screwdriver which I’m sure they don’t want to spoil just yet. These will launch on July 23.

So now you should definitely have all the Thirteenth Doctors you could want, right? At least until the new season premieres in the fall.