What DOCTOR WHO's First Black Woman Doctor Means To Me - Nerdist

What DOCTOR WHO’s First Black Woman Doctor Means To Me

I went into this week’s Doctor Who episode seeking a moment of reprieve from the world and a needed emotional boost. The series doesn’t always thrill or fulfill me, but there are so many instances where it delivers the perfect moment or maxim at the optimal time. “Fugitive of the Judoon” gave me much more than a temporary escapism high. It affirmed my place in the fandom, ignited a deeper excitement for Doctor Who’s future, and connected me to The Doctor in a powerful new way through Ruth (Jo Martin). She literally and figuratively broke the glass by introducing herself as THE DOCTOR—a Black Gallifreyan traveler blazing a path across space and time.

My initial Ruth thoughts were a mix of excitement over her adorably chipper persona and trepidation about her safety. Whenever I see a Black woman’s face on this show, I think about the stories of past characters. I cringe at the precarious situations that Martha was placed in and how a sizable subset of the fandom still despises her for not being Rose Tyler.

I lament about Bill’s pain over becoming a Cyberman—a righteous anger that wasn’t respected by The Doctor. I wonder what could have been with the fabulous Grace before she was killed off last season and how Bella was pretty much left to die in an impossible battle. Basically, there were no signs pointing towards this scenario working in Ruth’s favor.

I initially assumed that her partner was the center of the Judoon’s attention; a renegade villain or someone connected to The Doctor who had gotten into a mess. Ruth was likely the oblivious accomplice and a prime target to be collateral damage in this conflict.

Lee’s death led to Ruth’s true identity brilliantly unfolding, but my mind went everywhere except towards the truth. I wondered if Ruth was another version of The Master or perhaps The Rani. Maybe she was simply a “villain of the week” with some odd story behind her hiding on Earth. I never imagined that this woman could possibly be The Doctor because there had never been a Doctor who looked like her before. It was one of the few “impossible” outcomes on a show where pretty much everything else is possible. 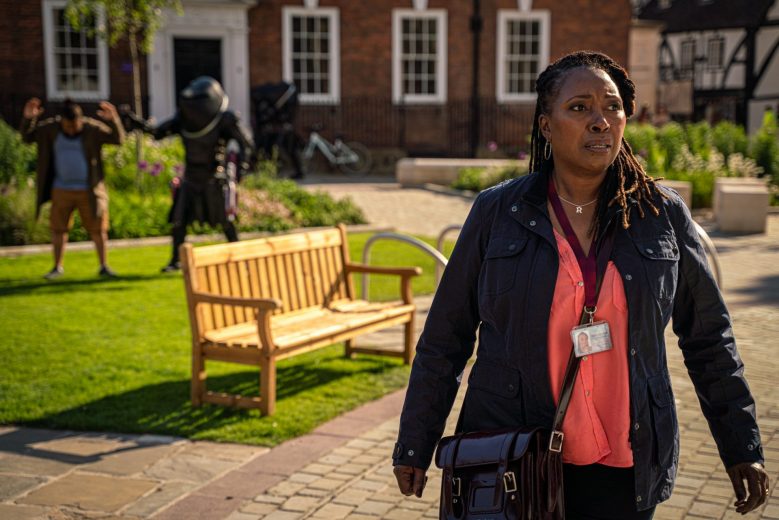 All of those thoughts shattered the moment she broke open the box and energy flowed towards her. Thirteen swept away dirt to reveal the words “Police Box” and my soul instantly escaped my body and soared towards the heavens. I let out an audible gasp followed by a few profane phrases but I still could not fully compute what was going on. There was no way that this series would introduce a 40-something (at least she thought she was) Black woman as The Doctor, right? It would explode the minds of fans who were already seething over Thirteen, Yaz, and Ryan’s nerve to exist in the same TARDIS.

My heart started slamming in my chest as Thirteen turned to face Ruth. I may have held my breath as I waited on Ruth to speak, to say the words that I had longed to hear from someone with her face on this series. I am The Doctor. In a world filled with sudden, heartbreaking moments and disappointment over how women like me are treated in real-life and on TV, this was a welcome surprise.

I could not believe that Doctor Who was actually making this happen. I felt an overwhelming rush of squee and shock combined with fear that this would somehow be ripped away from me like a dream. But, it was real—history was being made in front of my eyes and it was long overdue. I was at the peak of an unexpected roller coaster ride right at the moment before everything goes rushing down the tracks. And what a rush the remainder of this episode was for me. 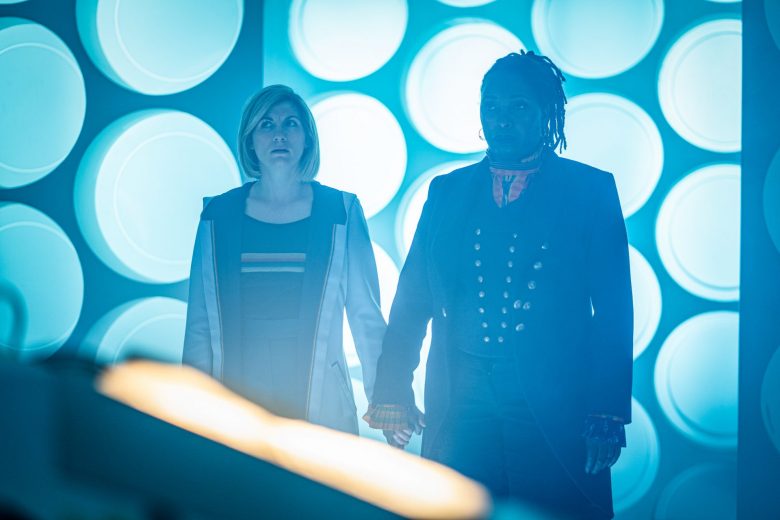 I wanted to freeze frame every single moment after her reveal and bottle my good feelings for a rainy day. My eyes could not stop taking in Doctor Ruth’s entire aesthetic; a beautiful brown-skinned woman with meticulous locs and impeccable style. The buttons on her vest and blazer, the wonderful Ankara print shirt, and a set of specs to round it all out. It was love at first sight.

I have cosplayed Bill and Martha but, for the first time, I was absolutely ready to be The Doctor. It’s an excitement that I didn’t get to fully experience as a Black woman when my White counterparts were celebrating “women making strides” in genre with Jodie’s Doctor, Wonder Woman, and a list of other protagonists who look like them. I’ve spent a lifetime connecting with heroes who don’t reflect me, so I will celebrate any time a Black woman occupies this role.

I adored how the show approached her initial conversation with Thirteen with heavy humor about the latter’s costume and use of a sonic screwdriver. It was a fun yet bizarre interaction where Thirteen was the audience surrogate and filled with all the questions and observations. Doctor Who didn’t shy away from making Doctor Ruth brilliant and authoritative (shoutout to writer Vinay Patel) while alongside Thirteen, challenging her in new ways. This incarnation encapsulated so many tenets of The Doctor’s quick-thinking personality and wit that fans love, but she brought a distinct flair to the role. Everything about her makes me antsy for her return and the details about where she falls in the Doctor’s timeline.

The first Black woman Doctor re-affirmed an established truth—both gender presentation and race are fluid for Gallifreyans so there is no reason why The Doctor can’t look like me. Black and other women of color can be more than one-off characters and the sidekicks whose lives revolve around a time-traveling alien. We can be the titular hero of this saga, too.

It ignited a celebration among myself and my close community of marginalized and like-minded fans who love the series. Our collectively hype chatter and hopefulness felt like a breath of contagious fresh air and was a reminder of the power of positive representation. The general Doctor Who fandom often feels like a place where we are sidelined and told to be happy for what we get, even though these representations have highly problematic elements that don’t take their identity into consideration.

So, this moment feels exceptionally validating and (for now) like a win in the wake of cautious optimism that’s often followed by predictable disappointment. It’s a cycle that we hope will not repeat itself in this situation. The truth is, all I, and many fans of color, want is to become the norm, the protagonist, to be treated well, and to be seen and make an impact on this fantastic world.

I have a renewed anticipation for a future where The Doctor regenerates into a Black woman and she gets companions and story arcs for several seasons. But for now, I want as much of this Doctor as possible—teaming up with Thirteen, verbally obliterating The Master, in Big Finish Audios, and in a ton of fan art and other Doctor Who paraphernalia. My daughters get to live in a world where The Doctor looks like the women in their family and that’s so awesome.

This precious moment of elation is a feeling that I will never forget, no matter what is revealed in the future. Hopefully, the show will be good to this Black woman Doctor and give her a story that is intriguing, vital, and creates a powerful shift in the Whoniverse.