It’s the day of Dev Patel! After the grim fantasy of The Green Knight teaser, we’ve been blessed with a charming and dynamic trailer for Armando Iannucci’s Dev Patel starring adaptation of Charles Dickens’ David Copperfield.

As you can see, the gorgeous trailer promises is a lively adaptation of Charles Dickens’ classic tale of the life and times of the titular young man. Often seen as Dickens’ masterpiece, the story sprawls decades and follows David Copperfield as he traverses life as a loved child, a lonely orphan, and eventually a famed author. Starring a veritable who’s who of British talent the film features Dev Patel, Gwendoline Christie, Nikki Amuka-Bird, Peter Capaldi, Hugh Laurie, Tilda Swinton, Ben Whishaw, and Benedict Wong.

The official Searchlight Pictures description teases the impressive roster of behind the scenes talent along with a little hint at what the story of David Copperfield entails.

“The Personal History of David Copperfield re-imagines Charles Dickens’ classic ode to grit and perseverance through the comedic lens of its award-winning filmmakers—giving the Dickensian tale new life for a cosmopolitan age with a diverse ensemble cast of stage and screen actors from across the world. Emmy® winners and Oscar® nominees Armando Iannucci (In The Loop, The Death of Stalin, HBO’S Veep) and Simon Blackwell (In The Loop, HBO’S Succession) lend their wry, yet heart-filled storytelling style to revisiting Dickens’ iconic hero on his quirky journey from impoverished orphan to burgeoning writer in Victorian England.” 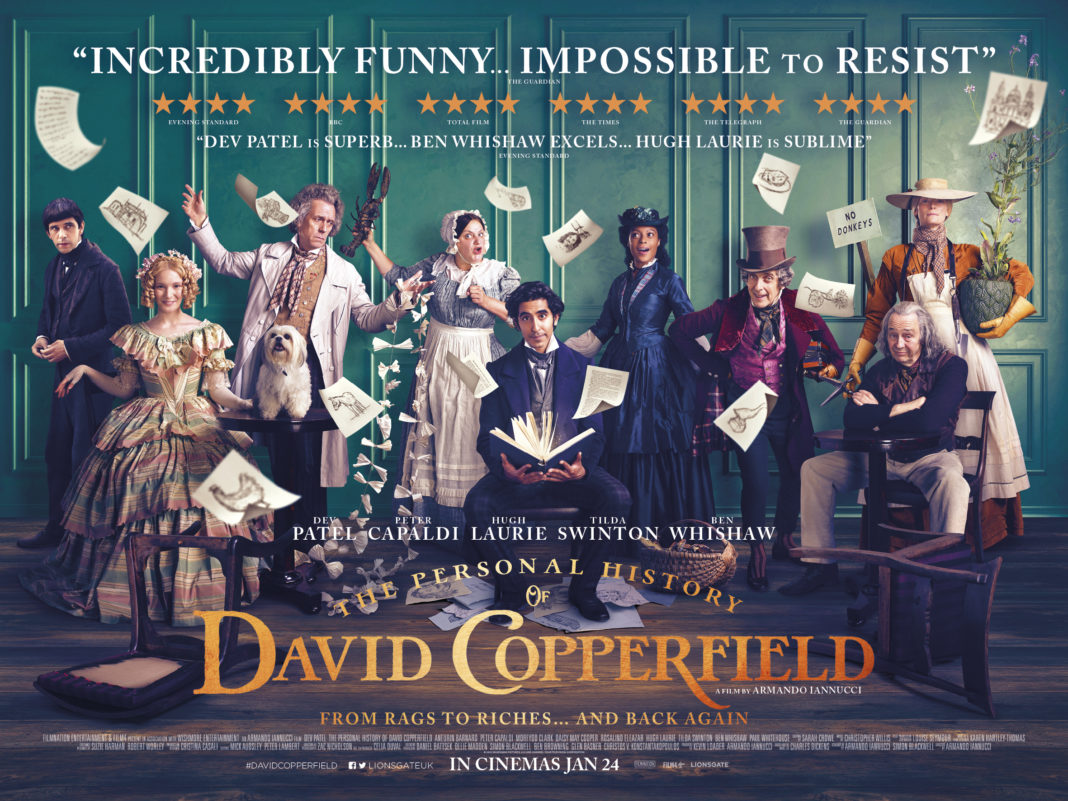 We’re huge fans of Iannucci here and the idea of seeing him team up with Veep’s Hugh Laurie is always a delight especially in what looks to be such a vibrant and original reimagining of a literary classic. Honestly, with a cast like this we’d likely have turned up no matter what the film, but we all need a charming, inclusive, funny, and smart period piece in our lives in 2020. Though American audiences will have to wait until May 8, the film has already been released in the U.K. and as well making a pretty bit of pocket change for a period piece that’s only been released in one market, it is also garnering rave reviews. The Guardian‘s Mark Kermode wrote of the film, “It really is a wonderfully entertaining film, managing to both respect and reinvent the novel from which it takes its lead, creating something new and exciting in the process.”

With five star reviews and a cast that any blockbuster would be wildly jealous of, The Personal History of David Copperfield is definitely up there on our must watch list and we cannot wait for it to hit U.S. screens later this year. Until then we’ll just be rewatching this trailer and thinking of Dev Patel in fitted suits wandering around the cobbled streets of London. Feel free to join us, or if Arthurian angst is more your speed make sure to check out the trailer for Patel in David Lowery’s The Green Knight.

The Personal History of David Copperfield hits U.S. screens on May 8.