Recently, 10-year-old Nandi Bushell blew us away with her solo cover of Joy Division’s classic “Love Will Tear Us Apart.” The gifted youngster showed off her incredible musical skills by playing all of the instruments in the song. We weren’t the first to appreciate her talent, though. She’s previously caught the attention of big names like Lenny Kravitz and Rage Against the Machine’s Tom Morello. But now she’s taken aim at an artist also known for his versatility. Nandi is officially in a drumming throw down with the Foo Fighter‘s Dave Grohl. And after months of back and forth battling, it seems the legendary Nirvana drummer is ready to concede defeat. 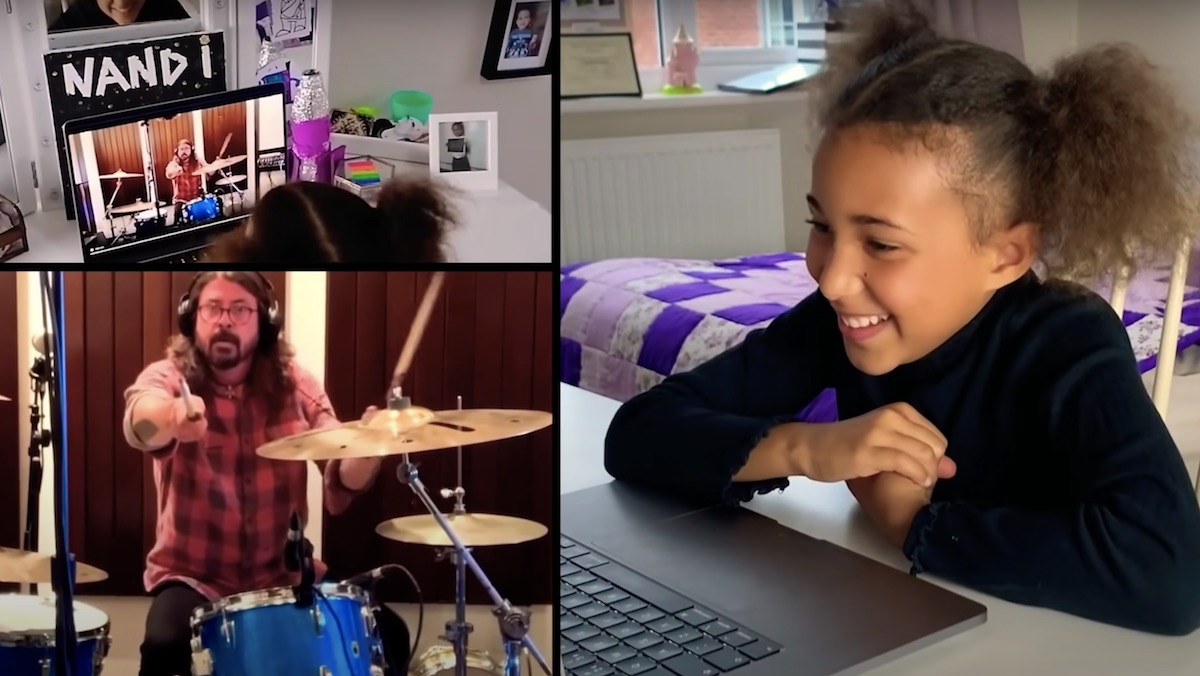 Back on August 17, the musical prodigy threw out a very public challenge on Twitter to the former Nirvana drummer (which we first learned about at Mashable). She offered up a “drum battle” featuring the Foo Fighter’s “ Everlong.”

My dream is to one day jam with Dave Grohl, @taylorhawkins and all the @foofighters! Mr Grohl I would love to have a drum battle with you! I LOVE Everlong it’s really hard to play as it’s so fast but so much FUN! #foofighters pic.twitter.com/Pmdhvl57uu

If that was all that came of her tweet it still would have been great, as Nandi absolutely killed her rendition. Fortunately, that recording was just the start as Grohl responded via the band’s official Twitter account. He played the song (on his daughter’s drums) for the first time since he recorded the song in 1997. The band’s actual drummer Taylor Hawkins has played it ever since.

Grohl then praised Nandi for her amazing talents before putting the proverbial ball in her court. He challenged her to play “Dead End Friends.” It is a song he recorded as part of the band Dead Crooked Vultures, which had Grohl on drums, Queens of the Stone Age’s Josh Homme from on guitar and lead vocals, and Led Zeppelin’s John Paul Jones on bass.

Nandi is more than up for the next showdown in this amazing war of musicians.

And as if that weren’t enough, on September 14, Grohl released a video of a song he wrote and performed (along with back-up singers “The Grohlettes”) all about what a rock star Nandi is. Pretty great time to be an aspiring drum impresario, eh?

Ok @Nandi_Bushell....Round 2! Every superhero needs a theme song. Here’s one for you! Mad props to The Grohlettes for the background vocals. pic.twitter.com/js9xBasbpw

In response to Grohl’s original song about Nandi’s drumming prowess, the 10-year-old musical prodigy responded with an original song of her own celebrating the legendary rocker. And much like her rocker idol, Nandi sang and played all the musical instruments for “Rock and Grohl, The Epic Battle.”

Mr Grohl. The song you wrote for me was truly, truly EPIC! You really are LEGENDARY! I wrote a song for you to say THANK YOU! It’s called ‘ROCK and GROHL, The EPIC Battle’! I hope you love my song, as much as I love your song for me! @foofighters #EPICBattle pic.twitter.com/z57oxbYFdC

We can’t get over how impressive she is! This is the rare battle with no losers, only winners—especially us.

Like all good things, it appears this battle is coming to an end. During a recent appearance on The Late Show With Stephen Colbert, Grohl finally conceded to the young drumming prodigy. In the clip, Grohl recounted the origins of their battle, which technically goes all the way back to when Nandi covered Nirvana’s “In Bloom” in November 2019 but heated up over the summer when she formally challenged him to a battle. (The drum battle conversation starts around the 2-minute mark.)

Ultimately, after a bit of back and forth, it was clear to Grohl that Nandi was “kicking [his] ass.” Sometimes you just have to concede defeat,” he told Colbert.

Grohl’s public concession came just after he and Nandi met—via Zoom—for the very first time, thanks to The  New York Times. Nandi and Grohl each spoke about their drum origins—Nandi started drumming at 5 while Grohl didn’t start drumming until his teens, after initially playing guitar and bass.

In one of the best moments from their conversation, Grohl invited Nandi to come jam on stage during the Foo Fighters’ next UK tour.

Grohl may have publicly conceded to Nandi, but it doesn’t look like the back and forth is over just yet. And we cannot wait to see what the pair have in store next.