Behind the Scenes at the Blade Blood Rave - Nerdist

Behind the Scenes at the Blade Blood Rave

On the packed dance floor of Terminal 5, as The Crystal Method thunder through massive speakers, I wriggle my phone from my purse and check the time. It’s 10:50pm: we’re already five minutes into the time frame for the blood drop. I’m at the Blade Blood Rave, and I’m taking you behind the scenes of the BBQ Films event that made national headlines by staging an immersive dance party to recreate the memorable opening of the 1998 vampire action film starring Wesley Snipes.

I thumb my phone off through the plastic ziploc bag that will hopefully protect it from the alleged twenty minute blood shower due any moment. Through the writhing mass of dancers wearing their gothic vampire trip hop finest, I notice movement around the edges of the main floor. Staff members carrying metal barricades, like the kind used along parade routes, are closing off the dance area closest to the stage. This will mark the blood “splatter zone.”

In a time when live-tweeting a tv show or cosplaying a favorite character to a film premiere has become the rule rather than the exception, immersive concerts and screenings seem like a natural step for live events.

It’s a winning formula: as video games have built a multi-billion dollar industry on putting players at the center of incredibly detailed adventures, so do immersive screenings make ticket buyers a central part of their favorite films.

Four hours before I’m fenced in on the dance floor, I talked with BBQ Films founder Gabriel Rhoads as he went about the final preparations for the rave, which will include staged actors and samurai sword demonstrations along with selected scenes from Blade projected onto a large screen. 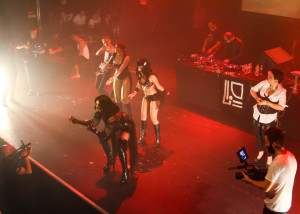 The group drew their name from their first event: a 2007 rooftop screening of The Blues Brothers paired with “burgers and beer,” Rhoads said. “It just took off, and outgrew the roof.”

“We have 4,000 square feet of carpeting, we have wall-to-wall carpeted Terminal 5, to make sure the blood drop will work well,” Rhoads explained, sourced from a company in New Jersey that recycles industrial flooring. “The basic idea is: ‘what’s the perfect moment to watch a movie? And for us, for many years the perfect moment was just a summer night on a rooftop. Then we started thinking a little more deeply about it, and how we could actually create that moment where it makes sense that you would actually be in the film, living the film.”

For any kind of nostalgia-based event, familiarity with the media inspiring the proceedings is required to both sell tickets and enjoy the experience being re-created. BBQ Film’s other immersive screenings, like Back to Future or Teenage Mutant Ninja Turtles, have obvious crossover appeal, but Blade seems a less sure choice.

“But everybody knows that scene,” said Rhoads, referring to the bloody vampire rave. “You ask somebody if they know that scene, they all do.”

Though he referred to the process of designing and throwing these events as “a little secret sauce,” when pushed, Rhoads explained that they try to pair raw spaces with “movies we carry around in our minds… stories that people have learned and based parts of their life on.” The film certainly resonated with those who attended the rave and experienced Blade from different perspectives based on the age at which they first encountered it. As the first partiers began to arrive, I run into Karen, 29, and Paige, 33, in the bathroom.

Karen, who wore a t-shirt from the film Cocktail, said that as an admitted fan of “nerdy movie things,” Blade had something she felt was missing from the comic book films of today. ”No one’s doing anything, it’s all motion capture,” she said, as Paige applied khol eyeliner in the mirror. While Paige said she was a fan of the vampire genre, she also called herself “a BBQ Films supporter,” saying she’d been to every event the group had put on over the last few years. “It’s always my nostalgia.” 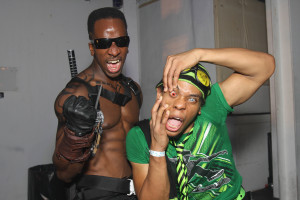 Making my way to the Terminal 5 bar, I saw it was packed with a diverse group of cosplayers, resembling a kind of Mos Eisley Cantina for cyberpunk vampires. There I shared a drink with James, 41, who told me he had actually been at the Blade premiere in 1998. “It was different than anything else out there at that point time,” he said of his initial reaction to the movie, which he called “one of those front-runners, that pushed the idea of the [comic book] genre forward.”

At the edge of the dance floor I met Liz, 26, who was nine years old when Blade was released. She saw the film as a teenager “knowing it was important.” Like Anne Rice’s bestselling novels, Liz saw Blade as part of the essential canon of vampire fandom. “It’s sex and death, It’s kinda primal.”

We’re two hours from the recreation of the blood rave, and the carpeted dance floor is filling up in anticipation of headliners The Crystal Method taking the stage. Veterans of the electronic scene, the Las Vegas duo of Ken Jordan and Scott Kirkland had tracks on both of the Blade film sequels. “Anything different is going to be appealing to us,” Jordan tells me. We’re talking backstage less than an hour before their set, with Kirkland off to the side of the room working on his laptop. “The whole story of recreating the opening scene of Blade, we’re like: what? We have to do this!” His excitement is palpable. “I feel like, let’s have these parties every week.”

When I ask Jordan what role this kind of nostalgia has in the electronic music scene, Kirkland’s head snaps up from across the room to say: “Now that’s a good question.” “There’s no nostalgic EDM,” Jordan interjects, “but electronic music goes way back.”

Looking forward to playing through the blood drop, Jordan confessed he didn’t have a plan for the set that night, saying: “You always have to wing it, you have to gauge the crowd.” 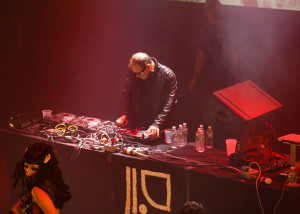 Two hours later, I’m part of that crowd and being pushed to the center of the dance floor as The Crystal Method pump “Trip Like I Do”. The dynamic electronic duo are fully engaged at their turntables. In front of them, dancers dressed as vampires swing their hips to the music as they play to the crowd. And what a crowd it is. The music is affecting everyone: the older among us are hearing tracks that feel like some kind of techno high school reunion, you can see the smiles of recognition across their sweat streaked faces.

The younger of the assembled appear to simply be dancing their asses off. Their energy is like a power source. And then it happens: the barriers move into place around us, the music gets more intense and the track shifts to New Order’s “Confusion.” It’s the song that heralds the coming of the blood.

Crew with backpacks full of synthetic blood attached to long-reaching spray wands mingle into the crowd. The dancers go crazy and start screaming. My heart is pounding in anticipation. I turn to my left and see Paige, her khol eyeliner now streaked from sweat. We share an exuberant smile as we dance wildly to the music.

When the first spray of blood hits my face it feels incredibly refreshing and exciting. I’d promised myself I’d dance in it for at least five minutes for the sake of this story. But very quickly I realize I’m not going anywhere. I raise my arms up and feel the blood start to really kick in. We’re all getting saturated, blood slowly coating my glasses and turning the world red.

It’s just like Rhoads told me hours ago: it’s the perfect moment when fiction and wish fulfillment merge to put us at the center of Blade’s legendary blood rave.

All photos by Yanick Anaissa Salazar

Don’t Call It a Comeback: Archie’s Been Evolving for Yea...