Just a Creepy Clown-Filled Motel by an Old Cemetery - Nerdist

Just a Creepy Clown-Filled Motel by an Old Cemetery

We’re not exactly sure when clowns went from being sources of joy and laughter to something downright terrifying. Was it the Joker? The doll from Poltergeist? Stephen King’s Pennywise from It? Whatever it was, enough scary clowns have become staples of pop culture that there was even a whole “scary clown” obsession a few years back.  But if there is an epicenter to the scary clown phenomenon, it is the Clown Motel in the remote desert town in Tonopah, Nevada.

The motel, which we learned about from Parks and Cons, was once named “America’s Scariest Motel.” It has over 600 clowns inside its walls, and it’s also close to the Old Tonopah Cemetery. That combo gives the Clown Motel not only the reputation of being creepy, but also legitimately haunted. The motel’s original owner, Bob Perchetti, downplayed the creepiness of his motel originally. He stated that his establishment only had “happy clowns.” To which I say, “all clowns are happy when they are trying to scare you to death.”

The motel doesn’t have much of a scare factor, but we do love its look. #ClownMotel #HauntFix pic.twitter.com/LwYUo6w0Ad

According to Thrillist, Perchetti sold the Clown Motel in 2017. Another clown enthusiast then bought the property. Hame Anand added his own collection to the motel’s already substantial number. He estimates the lobby has 2,000 clowns. Although he also thinks clowns are happy and wonderful purveyors of joy, he realizes his motel’s creepy and haunted nature helps attract guests. To that end, he’s added horror themed rooms based on The Exorcist, Halloween, Friday the 13th, and Stephen King’s It (naturally).

The motel is said to be haunted because of its proximity to the old cemetery. No one has buried a body there since about 1911. This Old West cemetery reportedly brings all kinds of ghosts to the property. Guests at the motel have cited various strange noises and sightings in the motel itself. Anand is even building a new room for the bravest of souls: the addition will have a window view of the cemetery. 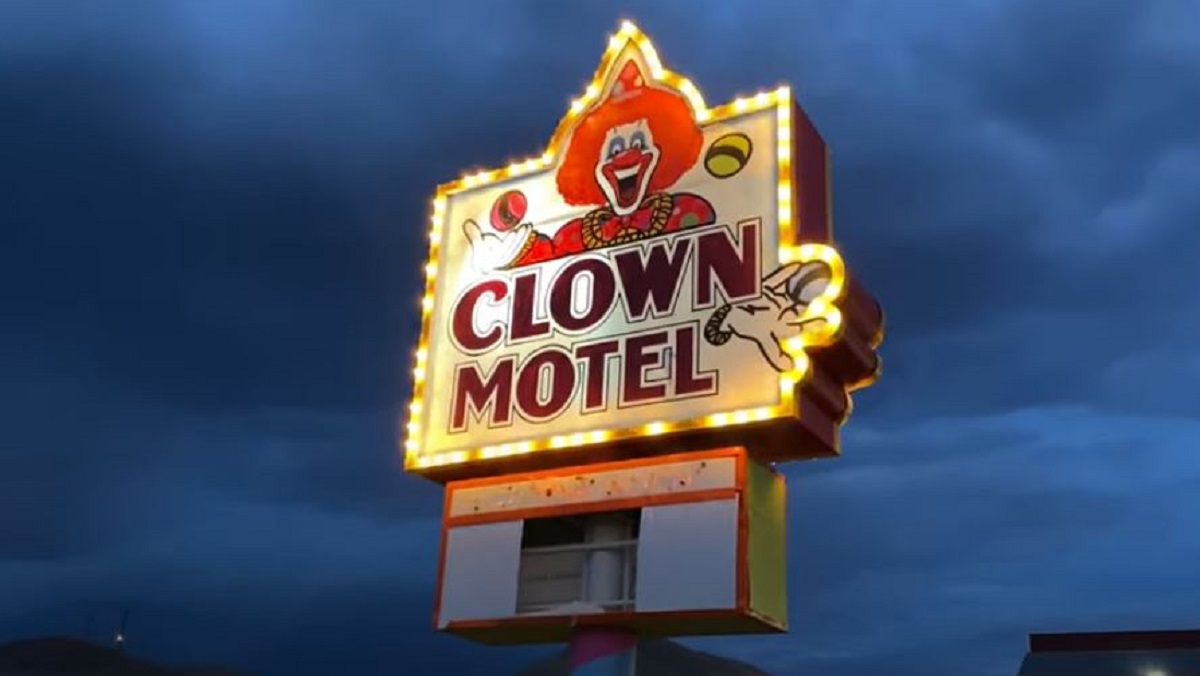 The Parks and Cons YouTube channel visited the Clown Motel recently, and as avowed horror and haunt fans, they seemed to enjoy it. But they also warned anyone with coulrophobia (the technical name for fear of clowns) to maybe skip this one. You can watch a video of their recent visit above. Then you can decide whether you are brave enough to spend a night in America’s most creepy motel. As intriguing as this motel looks, we think we are just as comfortable visiting this hotel via the internet. If this sounds like your dream vacation though, learn more about the hotel at their Facebook page.