Colonize Mars in ‘First Martians: Adventures on the Red Planet’

We love tabletop games here at Geek & Sundry, and we love to showcase the best games out there. If you want to stay tuned into what’s new and exciting in world of tabletop games, be sure to tune into Game the Game hosted by Becca Scott, with episodes going live that you can watch here at GeekandSundry.com, where you can also catch Becca showing you how to play all sorts of great games.

Tabletop games with a hard science focus are as rare as a malfunction-free NASA mission in a feature film. Sure there’s Phil Eklund’s esoteric High Frontier, but beyond that brain-melting cardboard boarding school of a design we’re left clutching at cosmic straws. Thankfully, the success of Andy Weir’s The Martian opened the door just a tad, and out came the scorching hot release of Portal Games’ First Martians: Adventures on the Red Planet.

This is an odd title in that it hits the red soil with a bevy of expectations and a shuttle-full of excitement. By basing the design’s bones on the 2012 hit Robinson Crusoe there was an initial groundswell of fervor and there’s a certain feel one can assume when diving into this harsh environment. Unfortunately, that forecast should be jettisoned out the airlock as First Martians is its own unique life-form ready to tickle your gills and break you mentally.

This is a fully cooperative experience driven by a central app. Your electronic device will handle random events and track progression throughout the game. Turns consist of group discussion and placing pawns to different areas of the board in worker placement-like fashion. Each astronaut is limited in the amount of effort they can expend in a day, and you will have much more you wish to accomplish than you practically can. 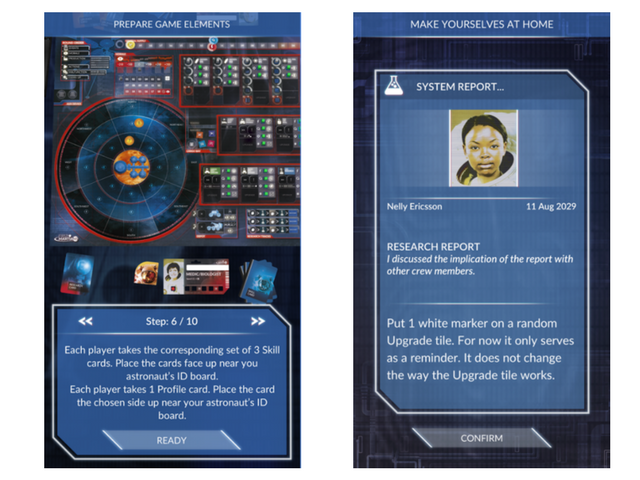 Resolution of tasks is interesting as you can guarantee success by placing two of your action discs on the space. You may, however, choose to fly by the seat of your pants and spread yourself a little thin. If you choose to place only a single pawn on the action then you need to roll a set of three dice. These dictate success and may indicate the loss of health as well as a random ‘adventure’. These events are provided by the app and are mostly awful, but can occasionally prove helpful.

The turn-to-turn focus of First Martians is on holding things together. A large number of physical components – such as the science lab, rec room, and solar panel array – form the majority of the board. You place little green cubes in small square cut-outs which light up the cardboard like a cheery display. Things turn from solid green to a Christmas-tree assortment of reds threatening to overtake the fresh pine needles. Pretty much everything from the rover to the toilet seat will break down and require your attention. Maintenance is a huge part of the game as you continually perform upkeep so that systems may remain chugging along and rattling bolts.

There is an exploration and adventure element to the game as you hop in a rover and push outside the hub. While the actions and outcomes here are significant, this only forms a small portion of your time within the arc of play as you’re constantly juggling plates with your hands and putting out fires with your feet. 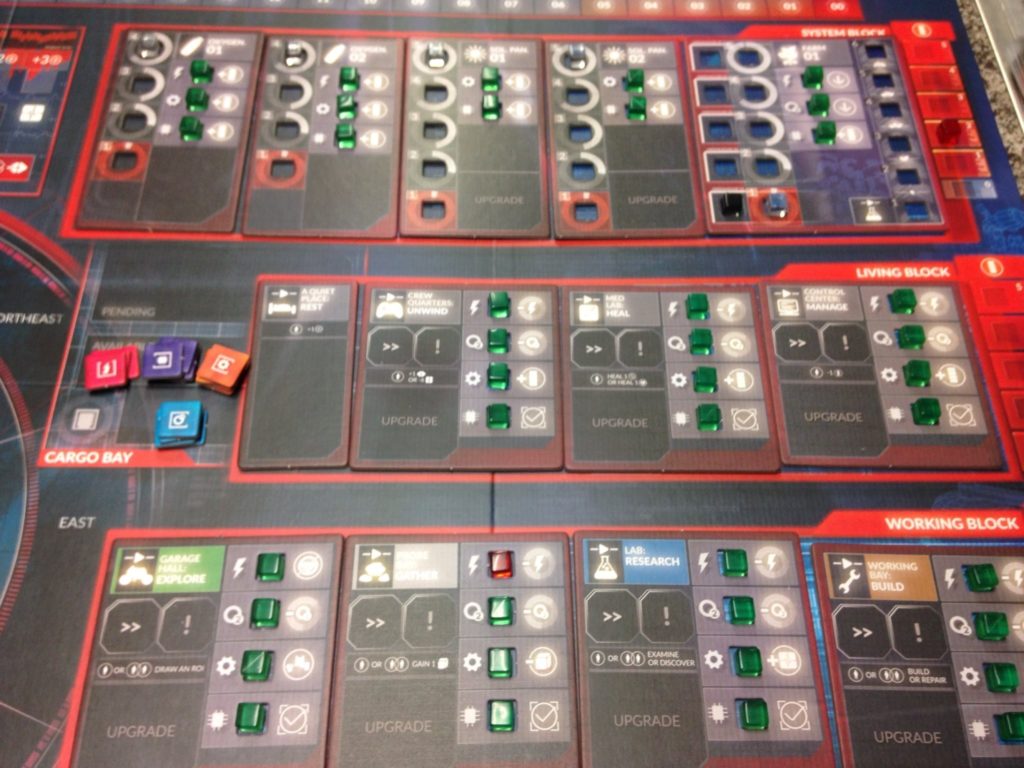 Similar to its predecessor is its reliance on scenarios to provide varied gameplay. You’ll scoop up scattered probes, haul crates of supplies, and test samples of Martian ecology. Unlike its forefather, there’s an enormous focus on campaign play. The game features two distinct campaign booklets, each stringing together a series of adventures where outcomes tumble forward and your status in the current mission has a large effect on your starting point in the next.

Make no mistake, this is a heavy game with a challenging ruleset that will require dedication to make it hum. The payoff is in engaging with those campaign booklets as the fruits of your arduous labor come to be. The inclusion of legacy content, in the form of envelopes you tear open at certain points in the narrative, increases the stakes and excitement as it breaks up repetition and pushes the experience outside its normal structured bounds. 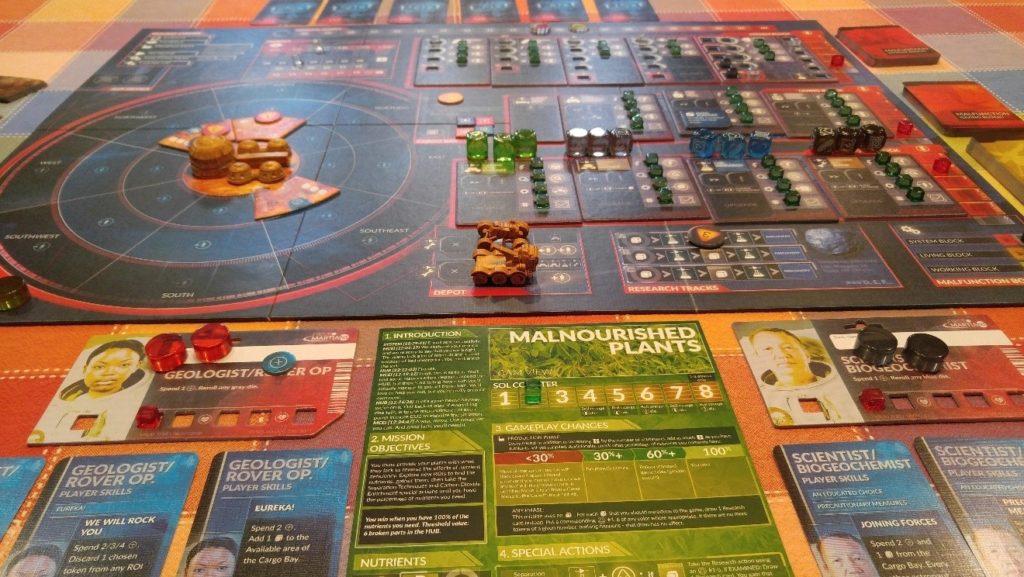 The strict adherence to setting and maintaining that hard sci-fi commitment will be a hallmark for some. Those expecting to find alien life forms or a hint of horror will be shocked to find no such elements. This is Matt Damon huddled in the corner of an inflated dome biting his fist and reminiscing about his childhood as everything threatens to collapse around him.

Maybe you didn’t choose the Martian life but the Martian life chose you. For those desiring a very scientific and weighty experience, First Martians offers a journey that will deprive your brain of oxygen and toss you through a tumbler.

Have you played First Martians or Robinson Crusoe? Let us know in the comments! Don’t forget to check out into our tabletop show Game the Game hosted by Becca Scott as we play games and talk about what’s happening in the land of tabletop gaming on Twitch and Alpha every Wednesday starting at 4 PM PT.