Clan Gangrel Doesn’t Have Any Secrets In VAMPIRE: THE MASQUERADE

There are two Clans in VAMPIRE: THE MASQUERADE that are the epitome of a classic vampire in legend. Clan Gangrel and Clan Tzmisce. In V5, only Clan Gangrel made the cut (for now), and they represent the wandering solitary vampires with the unique gift of shape changing. Many first time players gravitate to this clan for their undeniable combat prowess (I’ve seen 5 Tremere try to hacksaw a sleeping Gangrel in a bathtub and failed before.) For over a decade, Clan Gangrel has had a stigma of the power gamers clan. Their unique gift of Protean allowed them to grow incredibly combat worthy claws and even escape situations by turning into mist.

Fans of the old TV Series Kindred: The Embraced often laughed at the Ventrue Prince performing the Gangrel’s trade secret of melding into the earth. However, Clan Gangrel is more than the sum of their Protean Discipline—for it was their hero Beckett that saved all vampires from extinction during the end times. It turns out that being a Clan of survivalist explorers has allowed the Gangrel to uncover many secrets about the World of Darkness that other Clans rarely even see…

As travelers, it’s no surprise that Clan Gangrel can be felt in every White Wolf supplement. They’ve had relations with Werewolves, traveled all of Asia, conquered the world as Vikings and more. This diversity in their clan has only helped their survival through natural evolution. In Vampire: The Masquerade, clans would often have an offshoot called a Bloodline. These little bloodlines made up a small cultural difference and some minor mechanical effects or different disciplines. Throughout the history of the game, most Clans have only held one or two Bloodlines at best.

Gangrel has more than five.

From the spirit talking shaman called Ahrimanes, to ocean-dwelling vampires called Mariners; Clan Gangrel spans the globe. They’ve uncovered unique secrets of their own Viking blood magic, learned how to survive in cities, and even the City Gangrel could turn into swarms of insects. Just imagine a thousand vampire bees chasing you and hold that thought. These cultures are the strength of the Clan because even when the ‘Powers that be’ try to annihilate the clan, they will never get them all. 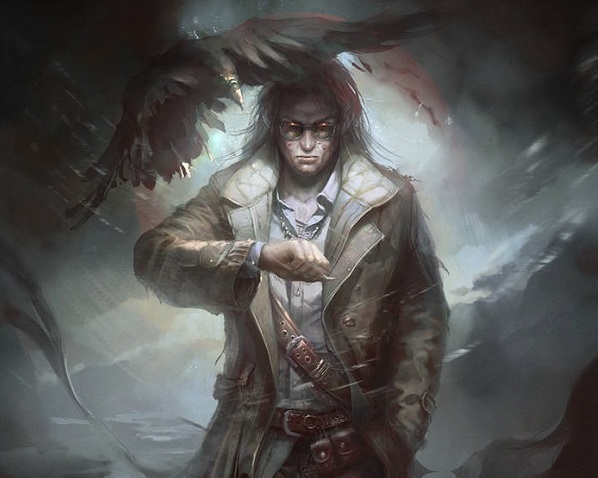 The Secrets of Shapechanging

In Vampire mythos the wolf and bat are the iconic forms creatures of the night take, and in VtM, this holds true for most characters learning a power called Protean. Once mastered, they will be able to meld into the earth or turn to mist, and the classic vampire combos. Gangrel has historically taken it to a whole new level—they change shapes based on their environments. A sea-faring Gangrel will develop adaptations for swimming, or even hunt in the form of a giant shark, while other Gangrel might find it easier to meld into a tree rather than the earth.

As they get older, an infamous Gangrel trick, named after Loki—allowed them to shape-change into anyone they drank blood from. This allowed a few members to begin infiltrating other clans or even mortal society while hiding among them like predators. In the mid-’90s, if you were lucky enough to have an obscure players handbook that printed level 10 disciplines, Clan Gangrel could literally shape-change themselves into a body of sunlight. 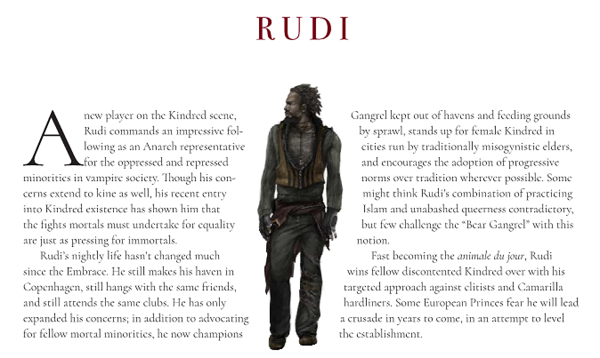 Clan Gangrels Loresheet reflects their staunch independence and freedom from both the Camarilla and Anarchs. As a new agent in the scene of Kindred politics, Rudi is a character that helps bring V5 into the modern era. Fighting the vampire hunters of the Second Inquisition and the old-vampiric guard of the Camarilla requires an army, and any are welcome to join their crusade. Rather than being an exclusive Gangrel Loresheet, the “Bear Pack” is willing to take in any vampire who proves their mettle.

Joining Rudi’s army doesn’t give you the best benefits in the game, nor should it—it’s a relatively new faction. What it does give you, is the profound ability to know when a member of your Coterie or your Background is being threatened. You will always know when your pack is threatened even if it’s remotely across the country in the form of an animalistic sixth sense. This defining trait for the Gangrel means that their growing army, is an ever increasing solid militia block that might dethrone the Camarilla in time (or at least survive the Second Inquisition).