In the 90s and early 2000s, the live-action role-playing scene was dominated by leather trenchcoats, lacy corsets and brooding in campus conference rooms. Vampire: The Masquerade spread through the night featuring players scheming, intriguing and crushing each other throughout the world. Many of those LARPS still exist, having run for days, months, years and even decades, but the masterminds at Onyx Path Publishing have taken the experience of a big Masquerade game and shrunk it down into the size of a large deck of cards. The company recently delivered Prince’s Gambit from last year’s Kickstarter and Geek & Sundry were recently given a look at their immortal schemes. 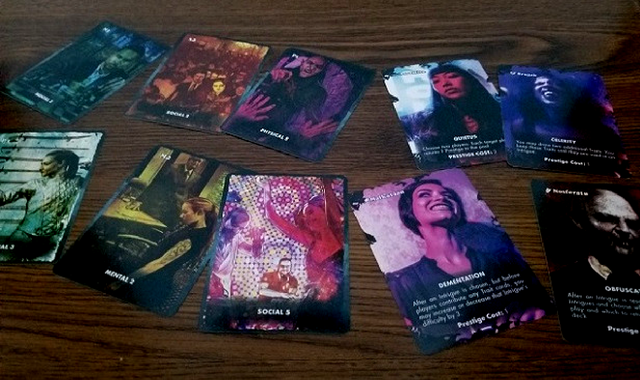 Prince’s Gambit centers around the most classic storyline in Vampire: The Masquerade history. The players are members of the Camarilla, the self-styled nobility of the night, seeking out infiltrators of the Sabbat within their city. The Sabbat want nothing more than to cause the stability of the city to fail so they can take charge and bring their inhuman philosophies to bear on the vampires in the city. 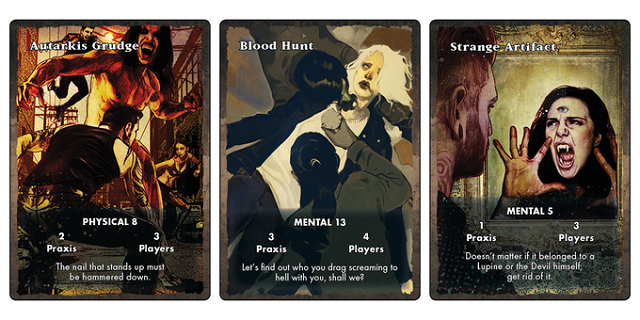 While this sounds like fairly straightforward hidden traitor play like Werewolf or The Resistance, there are a few elements that give the game unique flavor. The game is built to fit in a pocket, which makes it an excellent choice to pack as a game that can be played in bars or anywhere there’s a little bit of room to scream at each other. Each play also represent one of the 13 clans of the setting (or the clanless Caitiff) which gives them a unique power that requires Prestige points to spend. Playing a Brujah feels difference than playing a Tremere thanks to these abilities. Prestige is awarded after every challenge by every player, not just the ones who tried the challenge. These powers do everything from extra traits being drawn to helping usurp the Prince’s Favor and control of the challenges being talked about. The intrigues and art evoke the World of Darkness setting very well. Old players will enjoy the game because it shrinks down a night or two of LARPing into about an hour, while new players might get hooked and want to check out the upcoming fifth edition of the game this summer.

Prince’s Gambit is available from Onyx Path for $25. Whether you’re a neonate freshly Embraced or a long slumbering Primogen back to regain control, the game is an excellent way to get an enticing taste of the World of Darkness once again.

Are you a Vampire: The Masquerade Fan? Tell us which clan you belong to in the comments!