Years before he created Blood Rage, Eric Lang designed a game set within the Warhammer Fantasy Battles universe that was more brutal and sinister than his critically acclaimed hit.

Chaos in the Old World was the area-control predecessor to Blood Rage. It’s an asymmetrical game where players took on the roles of gods seeking to corrupt and enslave the world. In some ways, it’s superior to his Viking masterpiece, except for one: It’s no longer on retail shelves.

When Fantasy Flight Games ended its partnership with Games Workshop, it meant the end of production of Chaos in the Old World. Whether or not Fantasy Flight retools the game’s mechanisms into a different theme remains to be seen, but there are still copies of CitOW that can be tracked down on the secondary market.

I recently scored one of those copies, so let’s take a closer look at why this game is so this highly regarded sought-after.

Players take on the roles of four Ruinous Powers, aka the Gods of Chaos: Khorne, Nurgle, Tzeentch, and Slaanesh. From Khorne’s thirst for battle and death or Nurgle’s appetite for filth and disease to Tzeentch’s manipulating ways or Slaanesh’s penchant for pain and pleasure, you’re not exactly playing with the most wholesome of characters.

Right off the bat, you’re thrown into this world of demons and slayers and your goal is to annihilate the human uprising from the Old World, sending them into oblivion. You’ll earn victory points for dominating the regions in the Old World and the first to 50 points wins the game.

Like Blood Rage, the player boards in Chaos in the Old World show exactly what you can do on your turn. You’ll pay a Power cost for playing certain cards and you’ll upgrade your figures (Cultists, Warriors, and Greater Daemons) to improve your chances during battle.

After drawing an Old World card that may change game conditions for that round, you’ll draw your personal Chaos cards. Next, you’ll either play a Chaos card or summon one of your figures onto a region. Players then fight over regions in the Old World. Dice are rolled, with any modifiers from a region’s Chaos cards, and hits are assigned.

After a battle is resolved, whoever has the most figures (modified by any Chaos cards) dominates that region. Score higher than the region’s Resistance (oh, those pesky humans) and you’ll score those precious victory points.

Finally, each Cultist remaining in a region will earn that God’s corruption token. If there are 12 corruption tokens there, then the region is ruined and out of the game. Way to go, you Ruinous God, you! 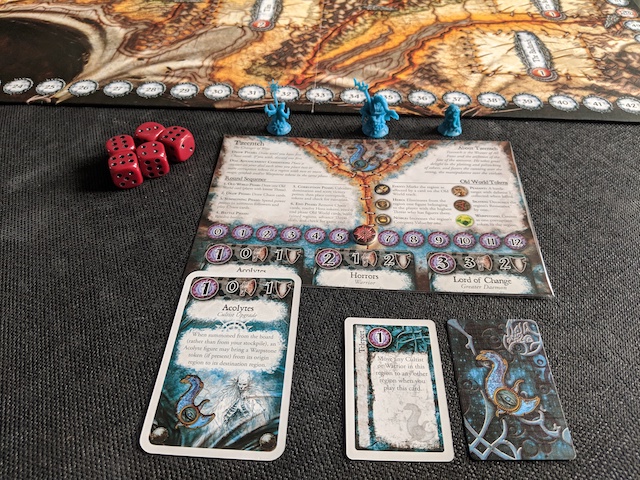 So, like Blood Rage, CitOW focuses on area control. However, what separates CitOW from Blood Rage is its asymmetry, as each Ruinous God plays differently. They also have their own unique Threat to the Old World, tracked on the board’s dials with each God having its own conditions for movement. Advance your dial to its last space and you automatically win the game!

It’s this asymmetry that’ll appeal to gamers and you can choose the character that fits your style of play. Khorne wants to fight, since they get to extra dice in battle. They’ll also want to focus on moving their Threat dial. Nurgle, on the other hand, gets to summon figures for cheap and wants to dominate regions for victory points each round. Tzeentch draws and replaces cards easier than the other Gods, and they can win with either victory points or via their Threat dial. Finally, Slaanesh is known for their flexibility and can easily adapt to their opponents’ moves.

Chaos in the Old World is the perfect gateway for a board gamer to get into Warhammer games (particularly the new Warhammer: Age of Sigmar) world and vice versa. It’s worth searching your local gaming groups for this out-of-print classic, especially if you’re a Blood Rage fan looking for a different type of rich and immersive experience. And don’t be surprised when CitOW makes even the must straight-laced gamer a bloodthirsty god looking to dominate and ruin humankind.

What are your favorite out-of-print board games? Tell us in the comments!