Cannabis Being Sent to ISS on Upcoming SpaceX Cargo Mission

Here’s a piece of news fresh off the stinky rope for people who are interested in getting massively “high” (in altitude): Hemp cultures are going to be sent to the International Space Station (ISS) aboard a SpaceX cargo mission slated for March 2020 in order to research how space radiation and microgravity affect their gene expressions. And while this mission is definitely all about exploring the science of how plants may grow differently in space, we still can’t resist the image of one day turning the Red Planet that kind of green.

Futurism picked up on news of hemp’s forthcoming adventure into space, which was announced via a recent press release from agricultural technology company, Front Range Biosciences (FRB). The Colorado-based company, which is working in conjunction with SpaceCells USA Inc. and BioServe Space Technologies at the University of Colorado, Boulder, says that it’s sending hemp tissue cultures into space to analyze zero gravity’s effects on the hemp plants’ metabolic pathways; after about a month, the cultures will be returned to Earth where researchers will examine the plant cultures’ RNA to determine if their gene expressions have been altered. FRB will also be sending coffee plant tissue cultures along with the hemp ones, as the company also grows coffee here on Earth.

The hemp cultures that FRB will be sending to the ISS will, in no way, be able to get astronauts, or anyone else for that matter, baked. (Although astronauts aboard the ISS are able to do some literal baking thanks to this awesome little contraption.) This is not only because only tissue cultures are being sent, as opposed to fully fledged plants, but also because the vast majority of hemp doesn’t really have any kind of psychoactive effect. This is due to the fact that while hemp is indeed a strain of cannabis, specifically Cannabis sativa, it still has exceptionally low levels of Tetrahydrocannabinol, or THC. For reference, a tasty, skunky bud like, say, Lemon Meringue, has a THC content of 21 percent while hemp usually has a THC content of some small fraction of one percent. 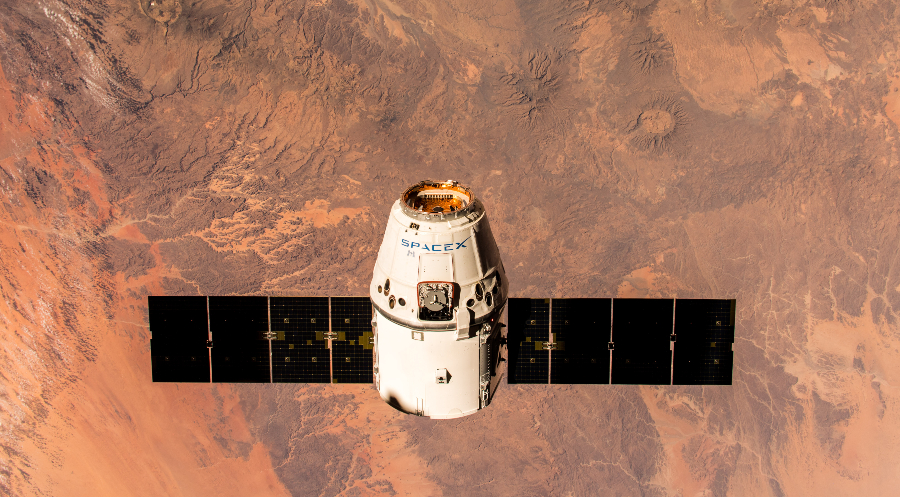 A picture of the SpaceX Dragon cargo spacecraft that will deliver the hemp cultures to the ISS. Alexander Gerst

After returning to Earth, the 480 plant cell cultures who attended space camp will, according to the press release, “help growers and scientists identify new varieties or chemical expressions” of the plants, that will ultimately “allow scientists to better understand how plants manage the stress of space travel and set the stage for a whole new area of research for the company and the industry.” Peter McCullagh, the CEO of SpaceCells, noted in the press release that “These are big ideas we’re pursuing” and that “there’s a massive opportunity” to bring to market new plants chemotypes that can better adapt to drought and cold conditions, as well as the effects of climate change.

What do you think about this mission to send hemp into space in order to study how its gene expressions change in microgravity? Are you fascinated by the way organisms change aboard the ISS, or do you think this is just a good plot for the next Seth Rogen movie? Grow some of your dankest opinions in the comments!