Astronauts Will Bake Cookies in Space for the First Time Ever

Just about everything astronauts do aboard the International Space Station (ISS) is extraordinary, even if it seems mundane here on Earth. Squeezing honey, reading children’s books, and even using fidget spinners are all simple acts that become magical aboard the orbital station zipping around our planet at 4.76 miles per second. And very soon, for the first time ever, baking cookies will be added to that list thanks to the recent delivery of an oven to the ISS. It’s space! The final—nomnomonomnom—frontier!

Delicious news in from @NASA! @northropgrumman‘s #Cygnus cargo craft successfully docked to @ISS_CASIS early this AM! Thanks to @NanoRacks, inside is the @kitchen_zero Zero G Oven which will bake @DoubleTree Chocolate Chip Cookies soon!#CookiesInSpacehttps://t.co/2CrmOExr9p

Cookie lovers mark the time, early morning November 4, because that’s when the Cygnus cargo craft containing the oven successfully docked with the ISS. Along with the oven, which was built by “platform for food development in space” Zero G Kitchen and Nanoracks, a company that makes tech projects possible in Low Earth Orbit (LEO), the materials required to make chocolate chip cookies were also delivered. The oven and cookie materials were launched from NASA’s Wallops Flight Facility in Virginia. 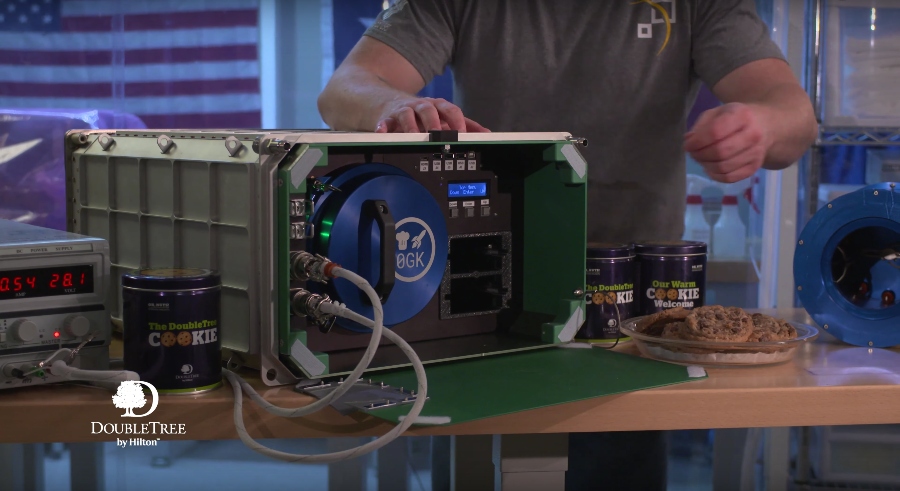 The Zero G Kitchen oven that will bake the first-ever cookies in space. DoubleTree by Hilton

The cookies themselves are likely familiar to a good chunk of the people learning of this news, because they’ve been supplied by the DoubleTree hotel chain. The hotel is famous for their cookies, and it’s wiki even notes that “Among the many signature things that DoubleTree is known for is their… chocolate chip cookies, which were originally made in the early 1980s for VIPs but now given to all guests….”

While it may seem like an easy task to bake cookies in space, a tailor-made oven design had to be developed in order to make the crunchy breakthrough happen, one that utilizes conduction heating rather than convection heating. Meaning this little space oven will bake cookies by directly heating them—like a toaster—rather than heating them like a regular oven, which heats the air around the food being baked. This change was required because stuff floats around aboard the ISS, and that wouldn’t be great for cookies in an oven. (Side note: Recall that things float aboard the ISS not because of a lack of gravity, but because of the fact that it’s in constant free fall.)

In a NASA statement discussing the space oven, which comes via iHeartRADIO, the space agency says it’s looking to use the act of baking cookies, as well as the cookies themselves, as a way of testing baking methods in space, comparing cookies made in space to those made on Earth, and finding out what “psychological and physiological benefits from eating flavorful cooked meals” there will be for the ISS crew members. Perhaps the ISS will start feeling less like a station and more like a home.

What do you think of this attempt at baking in space? What flavor cookie would you most like to see made aboard the ISS? Bake up a batch of your warm and gooey thoughts in the comments!