Canary Islands Volcano Erupts for the First Time in 50 Years

On September 19 of 2021, the Cumbre Vieja volcano in the Canary Islands erupted for the first time in 50 years. The eruption—which is ongoing as of this writing—has caused massive damage to local infrastructure and now threatens to spew toxic gases once it meets the sea. In the videos below, locals show footage of the eruption’s devastation. Which feels like glimpsing a whole other, fiery world.

🔥 house reached by the lava of the volcano of La Palma in the Canary Islands 🔥 @lapalma #lapalma pic.twitter.com/e1qihc69T0

DesignTAXI reported on the videos of the eruption, which show lava spewing from fissures; rolling down mountains as they torch and char forest; and even oozing through city streets at a shockingly fast pace. Cumbre Vieja is located on the island of La Palma, which is in the Atlantic ocean approximately 300 miles west of Morocco.

TikTok user Larrori shows at least one massive fissure spewing lava into the night sky. (A fissure is a linear volcanic vent through which lava erupts.) Further down the mountain, lava moves in slow, branching streams as it singes everything in front of it; leaving dark scars on the Earth in its wake. 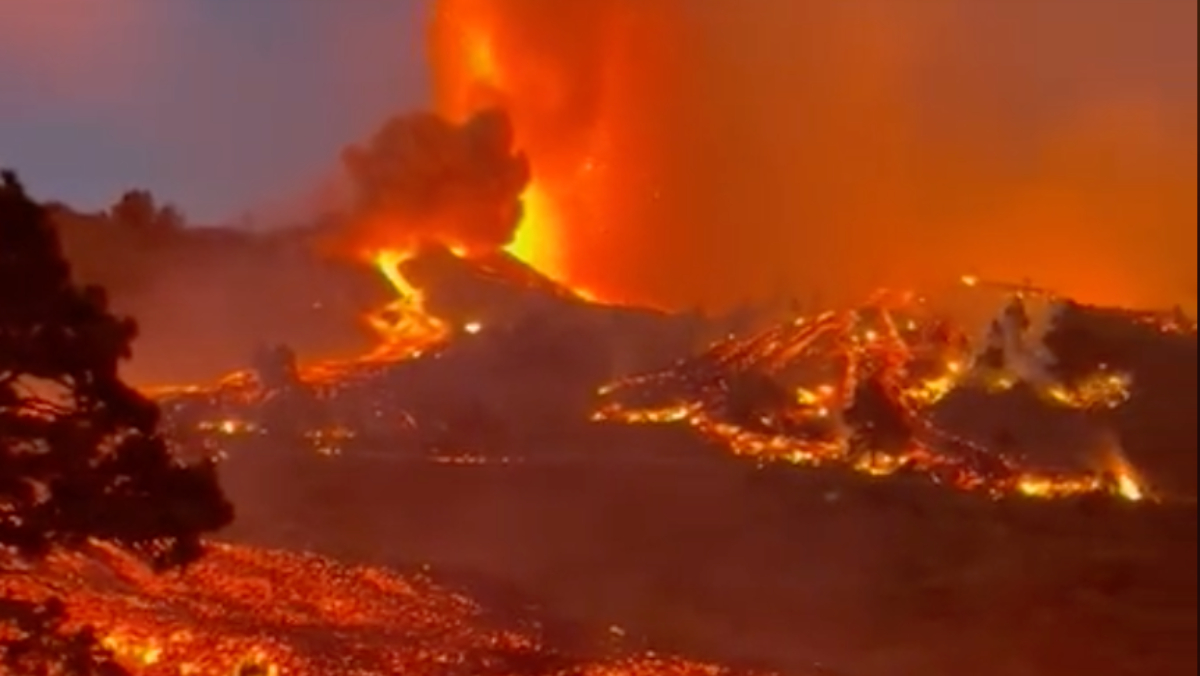 In the video at the top of the article, we see lava engulfing a home on the island. The oozing 2,000°F molten rock has now destroyed 300 homes in the same nightmarish manner. In the video immediately below, we see the lava barreling down a street in one of the island’s villages. It’s hard to say exactly how fast the lava is moving, but it’s almost certainly a few miles per hour.

Rivers of lava oozed down streets in La Palma, one of Spain’s Canary Islands, after a volcano eruption on Saturday (19/09/2021) pic.twitter.com/YI09XaonlP

Five thousand people have been evacuated away from the volcano so far. Luckily, locals had eight days of warning when instruments picked up an earthquake swarm that started under Cumbre Vieja on September 11. Thankfully, as of this writing, there have been no reported deaths. Although BBC News reports that dangers continue to abound. One of the big concerns now is the release of toxic gases when the sea cools incoming lava. Hopefully, everyone in the vicinity will be able to remain safe.