The world is getting another Batmobile. Matt Reeves’ The Batman will feature the latest version of that iconic car. And soon you’ll able to take it home and drive it around yourself. Even if you’re not a billionaire playboy with a secret superhero identity. Hot Wheels is giving Robert Pattinson’s mean Batmobile machine its very own high-end remote controlled model car. 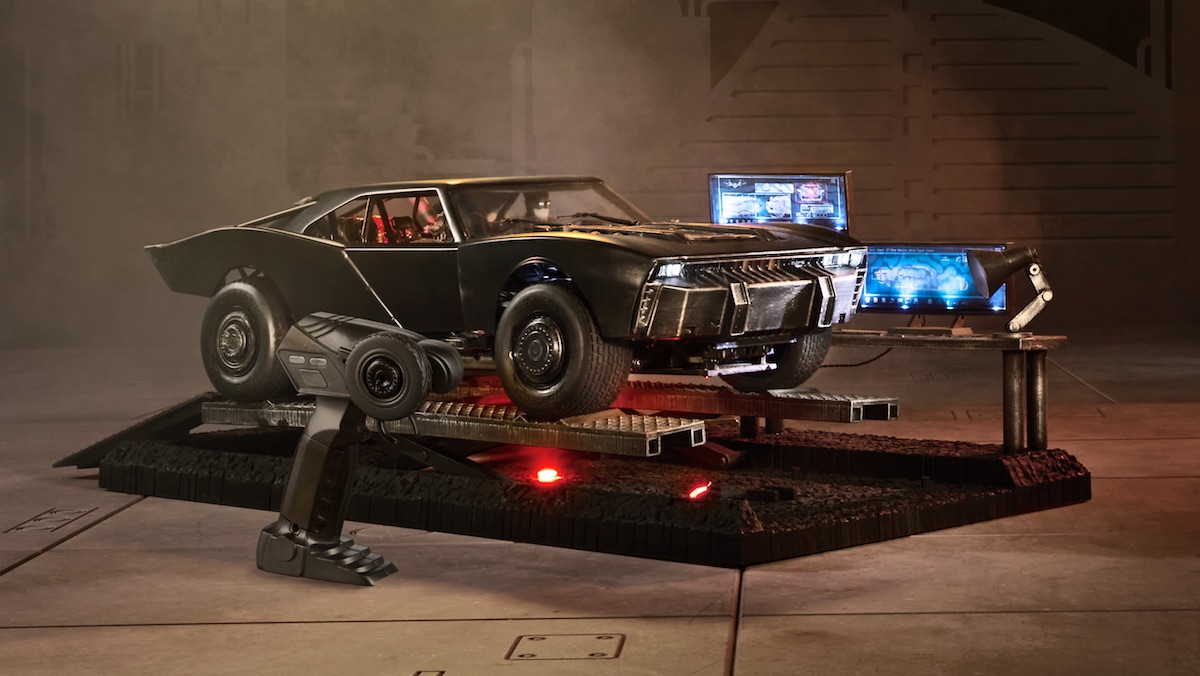 Hot Wheels’ new Batmobile fully recreates the car the Dark Knight will drive in his next big screen installment. The 1/10 scale R/C model stands 5.3-inches tall, 19.5-inches long, and 9.6-inches deep. It takes three hours to charge and can run for up to 25 minutes. During which time it will hit speeds as high as 15 miles per hour. It also features “a true-to-movie sculpt and deco.” You’ll find battle damage and dirt on this car. And it comes complete with all of the gadgets and extras you’d expect from Bruce Wayne’s car.

That includes rear-wheel drive with a working suspension. A “pistol-grip and wheel steering for maximum precision” when zipping around. And, in what might be the best touch ever, color-change LEDs and water vapor on the backside create “an authentic rear-jet glow.” When this Caped Crusader drives into the night you’ll know he’s gone. 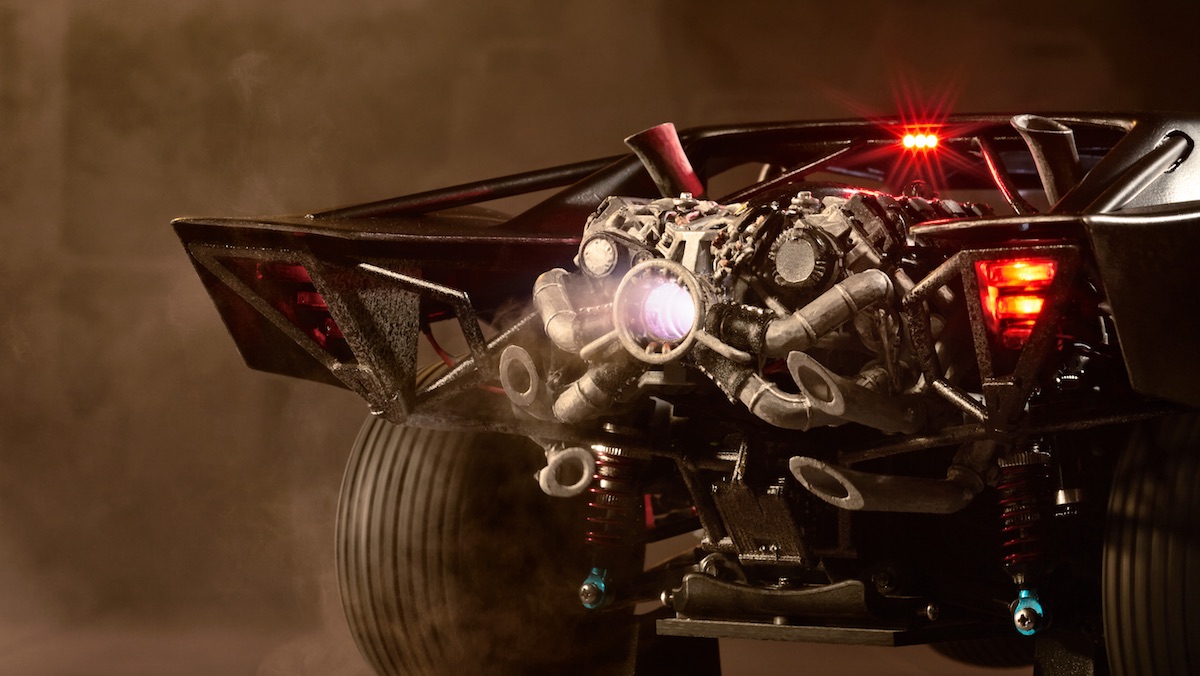 The inside is just as cool. This iteration of the Batmobile, which is based on a muscle car, also has “three-dimensional lighted instrumentation, a steering wheel and shifter that moves as appropriate, and full detailed seats.” Along with wires and gauges. And you’ll be able to place a six-inch Batman figure in the driver’s seat. You can even pose him to look like he’s actually operating it. His hands can go on the steering wheel and gear shift and move as the car turns.

For those afraid to play with something so nice, Hot Wheels R/C The Batman Batmobile also doubles as a high-end collectible. You can display it with a equally decked out plinth. It has its own Bat-Signal. And when you activate it monitors light up. It’s all part of a “fully scripted light show with additional visual and audio effects.” When it’s on the base this Batmobile looks gassed up and ready to leave the Batcave. 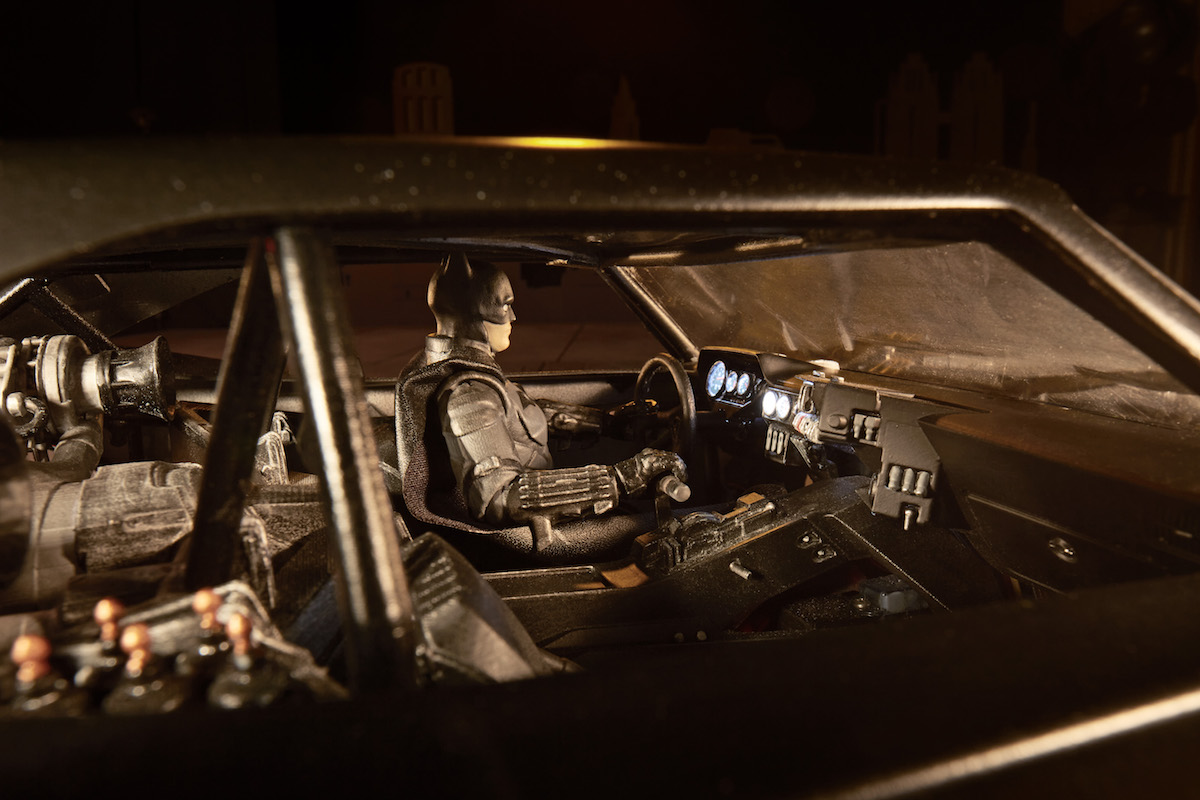 The pre-sale for this R/C model car starts at noon Eastern on October 20 exclusively at Mattel Creations. While you don’t have to be a billionaire to afford one, it does come with a hefty price tag of $500. When you think about it though, that’s a discount for a 1/10 scale model Batmobile. There’s no way any version of that legendary car only costs ten times as much.