Baby Yoda Merch Will Arrive in Time for the Holidays - Nerdist

Baby Yoda Merch Will Arrive in Time for the Holidays

Ever since it first appeared at the end of the first episode of The Mandalorian, the so-called “baby Yoda” has stolen all of our hearts. It is arguably the most instantly popular character since BB-8 first rolled onto the screen in The Force Awakens. But as Star Wars fans, we want to know…just where is all the baby Yoda merch?? Just when the heck we can get our grubby little hands on baby Yoda toys and shirts and backpacks and everything else under the twin suns?

Well, according to a report from CNBC, it looks as if we won’t have to wait too long. Soon, we will be able to purchase baby Yoda items just in time for the holidays. Yes, you can all breathe a sigh of relief, folks! Baby Yoda has saved Christmas. In fact, some adorable baby Yoda shirts are already available to pre-order at Amazon!

UPDATE: There are two T-shirts featuring The Child (aka “Baby Yoda”) available for purchase on Amazon. https://t.co/VWPzHmW07G pic.twitter.com/uAGdSpgoO9

Clothes and accessories featuring the adorable little green critter will also soon be available through Zazzle, Target, Kohl’s, Macy’s, Hot Topic and Box Lunch. Wisely, it seems that the folks at Lucasfilm were aware that baby Yoda would be a scene stealer and instant fan favorite, and planned accordingly in advance. Other products will also arrive at the Disney Store, ShopDisney and at the Disney Parks before the holidays. In addition, presales for others toys and plushies will be available in the coming weeks. It is uncertain when that merchandise will be shipped, but here’s to hoping it’s in time for millions of baby Yoda toys to make it into their respective Christmas stockings.

It seems that Lucasfilm licensing has learned from their history. Back in 1977, A New Hope was the most popular thing on the planet. Kids everywhere wanted toys of Darth Vader and Luke and Princess Leia under the tree that holiday season. But millions of kids woke up instead to a piece of cardboard promising the first wave of action figures would arrive…. in the spring of 1978. This is because the Kenner toys weren’t yet ready to make it into stores in time for Christmas ’77, leaving children everywhere disappointed. All signs point to history not repeating itself this time. 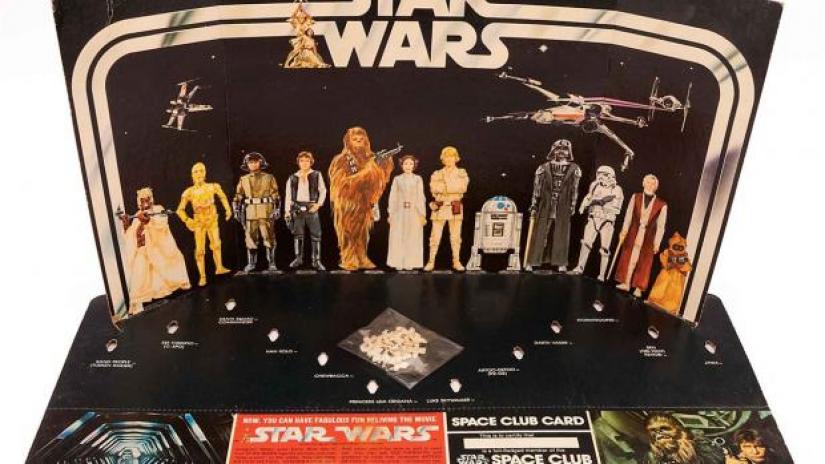 Baby Yoda—or simply “the Child”—was never shown or even hinted at in any of the marketing and initial merchandise launch for The Mandalorian. This was mainly because showrunners Jon Favreau and Dave Filoni wanted to keep his debut as a big surprise. And we think it was ultimately a smart move. It will be interesting to see if we learn the proper name and gender for baby Yoda not through the show, but through the merchandise. This would be very consistent with how Star Wars operates: an entire generation only knew that Ewoks were even called Ewoks because of merchandise. They are never once named out loud in Return of the Jedi. It’s tradition!